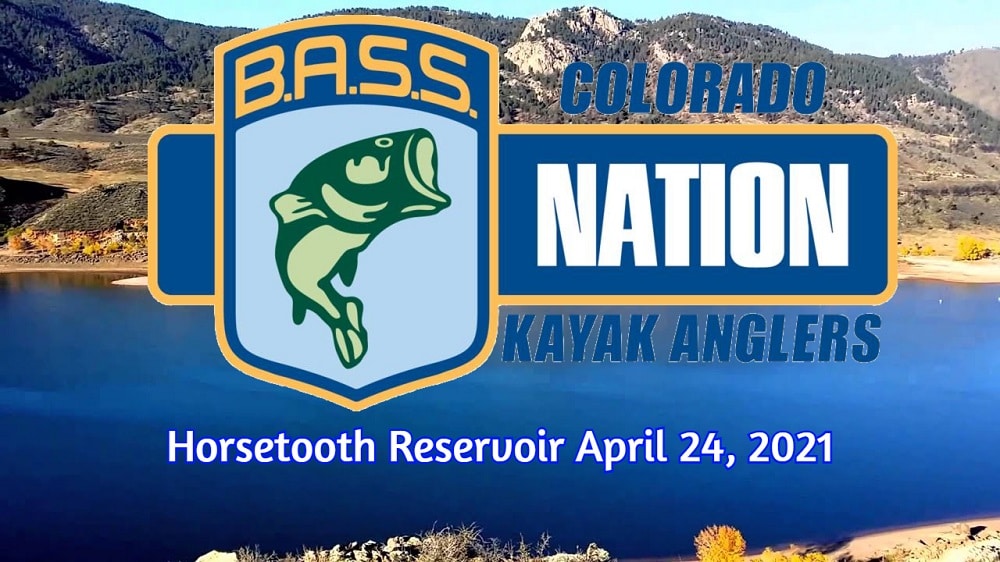 The Colorado Kayak Bassmasters (CKB) held its first tournament on Saturday April 24 on Horsetooth Reservoir in Fort Collins, Colorado. In the two weeks leading up to the tournament, I got the chance to pre-fish the lake twice to try and put a pattern together. However, the two days I got to pre-fish were not under very good conditions. In both cases we were coming off of snowstorms just prior to my days of being there. This led to a five-degree water temperature drop and made fishing difficult. My first day pre-fishing resulted in zero fish. The only action I had on the day was having two smallmouth follow in my lure after working a deep diving jerkbait around a secondary point. I could see some suspended fish on my graph in this area but could not get them to commit to anything I threw at them. The second day of pre-fishing I managed to do a little better but not by much. On this trip I was able to catch a keeper smallmouth working a blade bait over a secondary point but had no other bites on the day.

My two days of pre-fishing did tell me something though. I knew where I was not going to launch my kayak! I decided to launch in an area that I am more familiar with and fish what I was confident in. Although, I had not gotten to pre-fish this area, I historically have much more experience fishing there so was confident going into the tournament.

After launching the kayak, the water temperature was forty-two degrees and the grind began. I made my way to my first fishing spot after about a forty-five-minute pedal in my BigRig FD. I pulled up on a main lake point and started fishing a golden blade bait in thirty to forty feet of water. It didn’t take long before I hooked into my first fish. I pulled up a fifteen-inch smallmouth and was on the board. A few minutes later I hooked into another smallmouth about the same size. This fish came unbuttoned when I let up on the rod after feeling like I was horsing it in too much. I was bummed, but on the bright side I had more action in the first twenty minutes of tournament morning than I had in two days of pre-fishing. I stayed in that area and fished hard for three more hours without a single bite before I decided to move. I knew I should have left the spot earlier, but this was easier said than done after the two days of pre-fishing that I had.

I moved on to my next spot checking another main lake point but didn’t stop to fish as I marked nothing on my graph. I checked a few more offshore humps and saddles but was still not seeing any activity on my graph. I stopped to fish one hump for a while after I marked a single fish on the top but was unsuccessful in getting any bites. At this point there was about an hour and a half left in the tournament. I began making my way back to the launch checking points and humps all along the way. Unfortunately, the battery on my fish finder died and I was without a graph the final thirty minutes of the tourney. I stopped to fish some points that I was unable to graph but did not get any bites.

The tournament came to an end and I had only caught a fifteen-inch smallmouth. The competitors met up to go over the results and share what worked for them on the day. To my surprise, the single fish I caught landed me a seventh-place finish as many other anglers got skunked or only had a fish or two towards their limit. In the end there were only four anglers who turned in a five fish limit. In fifth place was Paul Roth with 28.25 inches. In fourth was James Strawbridge with 69.75 inches. Third went to Eric Allee with 70.50 inches. Second went to Mitch Salzman with 72.25 inches. Finally, first place went to Colton Colwell with 77.50 inches.
The top anglers shared what worked for them on the day and they all caught them in their own unique ways. James caught his fish on crankbaits and jerkbaits. Eric used jerkbaits and a Berkley Maxscent Minnow on a Trokar ned head. Mitch Salzman caught his fish on a ned rig and a golden blade bait (Hey I was throwing that!). Colton put his fish in the boat utilizing a six-inch Keitech swimbait while bumping it across the lake bottom.

At the end of the day, I was disappointed in my performance and decision-making, but these are the types of tournaments that help make me improve as an angler. So, in that regard the tournament was a huge success! I will take what I learned from that experience and use it to continue to grow as an angler. I want to thank the Colorado Kayak Bassmaster board for all their hard work in getting this kayak series off the ground, and I look forward to getting redemption while fishing more of their events this year!