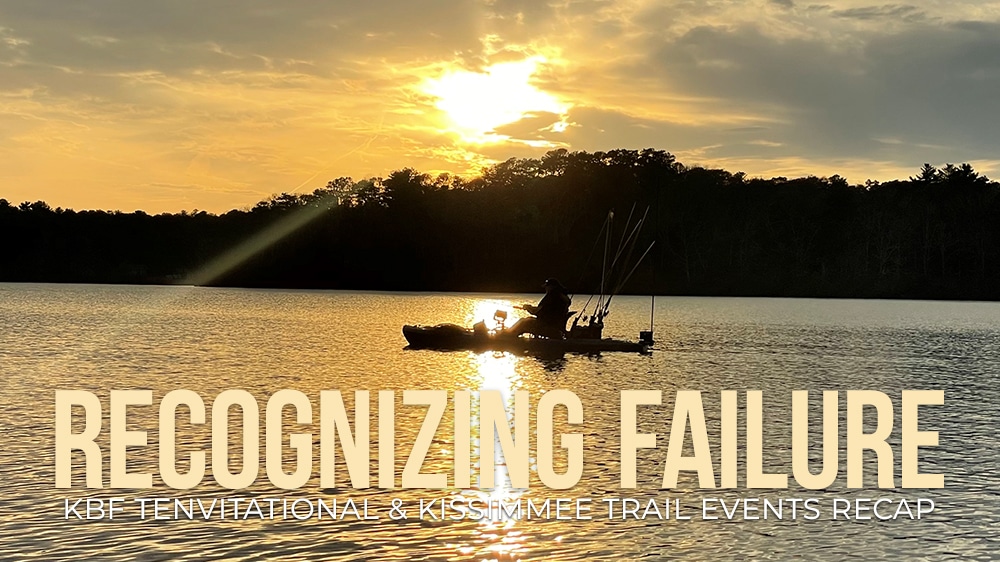 Failure is a part of success, and when it comes to tournament fishing anglers fail more than they succeed, from the local circuits to the big leagues. It’s part of the game, and something I’m all too familiar with.

On Sunday, January 24, I hit the road for the long drive from Massachusetts down to Kissimmee, Florida, to compete in the first Kayak Bass Fishing (KBF) events of the season—the two-day TENvitational and the two single-day Trail Events. My confidence was high, having come off a solid second-place finish in the 2020 Dee Zee KBF the TEN championship.

But I was haunted by the fact that one big mistake made at the Trail Series Championship on Lake Guntersville back in October cost me my spot to compete in the 2021 TEN championship. I went into that Guntersville event as the reigning Northeast Region Angler of the Year, in 3rd place overall in the nation, and I left it in 17th place.

A day-one mistake (fishing a spot I had not pre-fished) cost me. It was stupid, and it taught me a hard lesson on discipline. So on the drive down to Florida, I vowed redemption, to fish smart and earn my way into the TEN house by winning the TENvitational.

Leading up to the Kissimmee events, I had been warned that a lot of anglers were talking about the lake I fished last year. This wasn’t unexpected. They filmed me on day two, put drone footage on YouTube that made my location easily identifiable. It would have been unreasonable to expect that to go unnoticed. And it didn’t.

Tuesday morning, I hit that lake first. Four other anglers were there. As I made my way to “the spot,” two of those anglers saw me coming and tried to beat me to it, passing over a large expanse of spatterdock in the process. They had been fishing a stretch of shoreline a good distance away, so their actions told me that my “secret” spot was definitely no longer a secret (at least that’s how I perceived it).

I zipped into the area first, practically cutting off one of the other anglers, whom I knew, and I felt bad about that (but not too much because after twenty hours on the road, I desperately needed to use the woodland facilities available). That area of the lake produced, though, and in roughly two hours my best five bass went 95 inches.

Others had already and would continue to discover how bountiful that area could be (some would later learn how detrimental it is when anglers hammer a spot every day for a week straight, but that’s a discussion for another article), so it was in my best interest to pre-fish other lakes and put together some backup plans.

The following day, fishing a different lake, I put up a solid limit of around 85 inches. However, it took me all day and roughly twelve miles on the kayak, battling white caps and two- to three-foot rollers. Not an ideal prospect for tournament day. 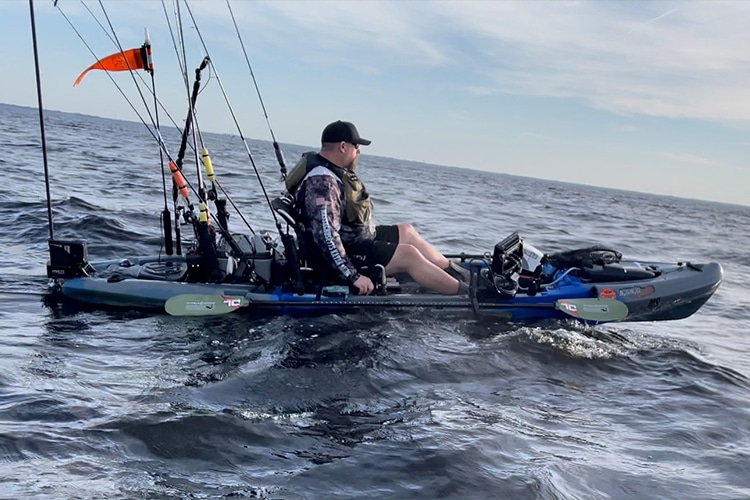 As a cold front rolled in that evening, those Florida bass did exactly what they’re famous for when the temperature drops; they shut down. Fishing got tougher and tougher still those final two days, leaving me with one choice for tournament morning: gamble on my no-longer-a-secret spot.

When I arrived at the ramp Saturday morning, I was alone, just like last year. I launched my kayak close to the main lake, went back to my car and waited. As I sat there in the dark, listening to the night sounds, I became hopeful. Thirty or so minutes later, I heard it: the hum of a motor, the telltale creaking of a trailer, and just like that…I had company.

A second angler showed up shortly after, then a third, fourth, fifth, until there were roughly fifteen anglers bustling around the ramp. 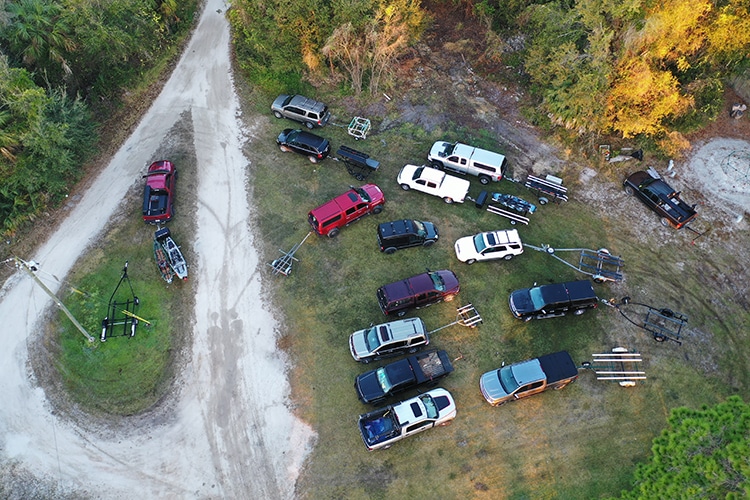 Upon talking with some of them—and as the Torqeedos were mounted—I knew I wouldn’t be the first to the area I wanted to fish. But even as two anglers shot past me at launch, I followed. Three anglers were there when I arrived, one having found a closer public launch, which soured moods. Not mine, however, as it was already soured by the time I arrived.

I backed off the area and waited nearby. When my alarm sounded at 7 AM, I began to fish scattered offshore spatterdock. After a while, I crept up toward one of the key features in that area of the lake. Another angler felt I was too close and let me know. I was close, but disagreed that I was too close. Still, I moved away out of respect.

At this point I should have abandoned the spot. That would have been the smart thing to do, but I remained, making my way to another key area, only to find yet another angler there. It annoyed me. My mental game was crumbling.

In boxing or mixed martial arts, you’ll hear many a trainer or color commentator say that fighting is “10% physical, 90% mental.” As a longtime fan and once-student of the fight game, I know how accurate that statement is. In large part, I think it also applies to competitive fishing (and probably innumerable other sports).

I shot back to my starting point, sour mood turning foul along the way. Noting an angler fishing the far end of a cut, I pushed in. The spot is big enough for two anglers, but it’s not the kind of area you want to share, and when he cast to the bow of my kayak he made that clear. I asked him if he planned to fish there all day. He said he did. We spoke for a bit, about how he was doing, how I did last year, and ultimately he said I could fish the back area, which I knew to be very shallow and unproductive (the water was down a few feet from last year).

Desperate, though, I gave it shot and, unsurprisingly, came up empty.

From there, I made my way out of the cut and moved toward another, only to have the angler who felt I was too close earlier rush into the opening of that spot, blocking me from entering (a rules infraction). We had words, of which I’m not too proud and for which I later apologized.

At that point, I left, something I should have done first thing in the morning, in search of other, productive areas.

I put the Flex Drive-E on high and worked my way to the other side of the lake, where I failed to catch fish but succeeded in breaking a brand-new fishing rod, hastening my descent into madness.

With little time left, I crossed the lake again, speaking to my wife along the way. As usual, she said all the right things, planted all the seeds necessary to get my mind back in the game, even as I adamantly told her all hope was lost.

When I made it to the far shore, those seeds quickly bore fruit, and at 1:47 PM I caught my first fish of the day. I would catch only one more, and I quit a few minutes early when a lakeside cowboy threatened to shoot me for fishing his “private property,” but I lost six or seven decent fish in the process, which amazingly, had I caught them, would have landed me in the money.

But more important, I’d found my confidence again, not to mention a productive area. My dream of making it into the TEN house faded away, like so many do, but I had something to work with for the second Trail Event of the weekend. And though I didn’t do well, I was happy for and proud of my good friend John Ferreira for taking the win.

The following morning, I launched from the southern ramp on the same lake and made my way north. I started in the spot where my life was threatened the previous afternoon, only to find a gate blocking the way (next year, when I have more time, I’ll make a formal complaint). I fished in front of it, cast under it, and hooked up with a 14-incher.

I fished hard, stayed positive, and had a decent limit early. I worked my way farther north, past the northern ramp, and shortly after found myself netting a solid 19.50 that torpedoed my chatterbait. 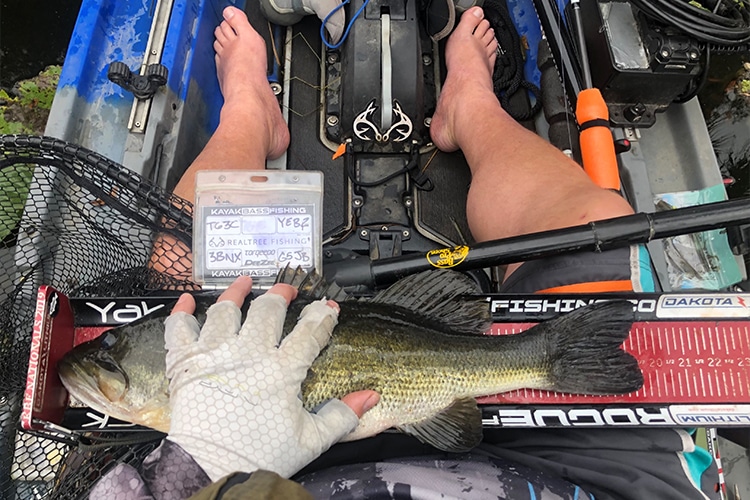 A strong southerly wind had kicked up at that point, so I nosed my Big Rig FD into it and rode the waves back to my starting point, quickly finding a decent upgrade just before encountering another lakeside cowboy, neighbor to the one I met the day before. He didn’t threaten to kill me, but he did tell me he had a “letter from the sheriff” that said he owned the water, which I thought was cute.

I moved on, sitting on 81.50 inches of bass, looking for a few upgrades. I found them, but unfortunately they came unbuttoned.

When all was said and done, I landed in 21st place out of 131 anglers, a huge improvement over my 100th place finish the day previous. Had I not lost those two fish, I’d have finished around 5th or 6th place. A solid turnaround, a little redemption, but a painful reminder that to be successful in this sport, you have to consistently be mentally strong. 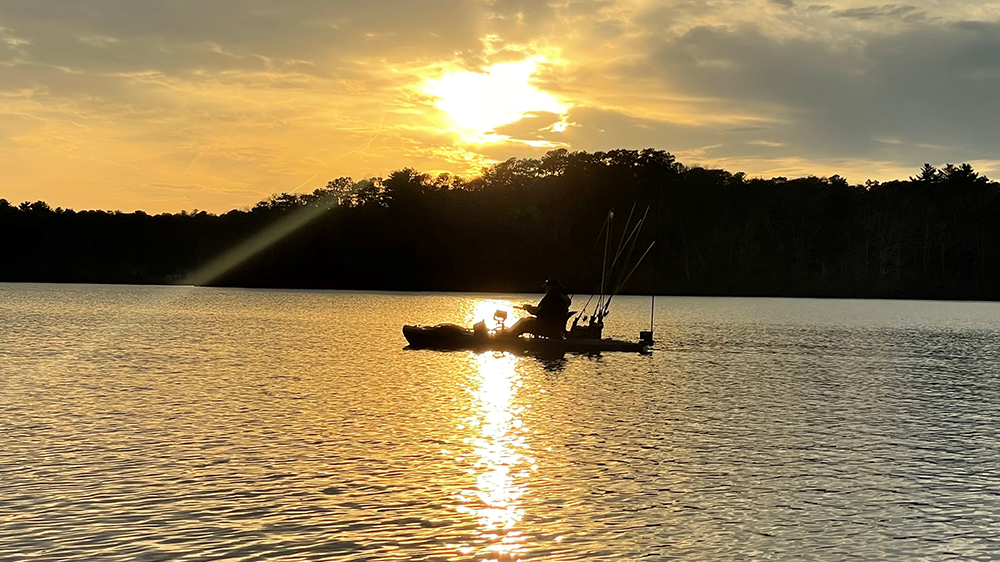 I went into day one with the wrong attitude, and though I knew this from the start, I failed to correct it. Over and over again I let my emotions get the best of me and made all the wrong decisions, until it was nearly too late. Sure, yeah, I would have placed in the money had I not lost so many fish when I finally found them, but why did I lose so many in such a short period of time? Was it happenstance, a dull hook, short strikes? Or was it something more likely, that my mind was elsewhere, my focus blurred, my skills dulled by a day of negative thoughts and poor choices? My money is on the latter.

With a few weeks before my next event on South Carolina’s Lake Murray, I have plenty of time to ponder all of these failures, learn from them, and hopefully use them to become a better, more successful angler.