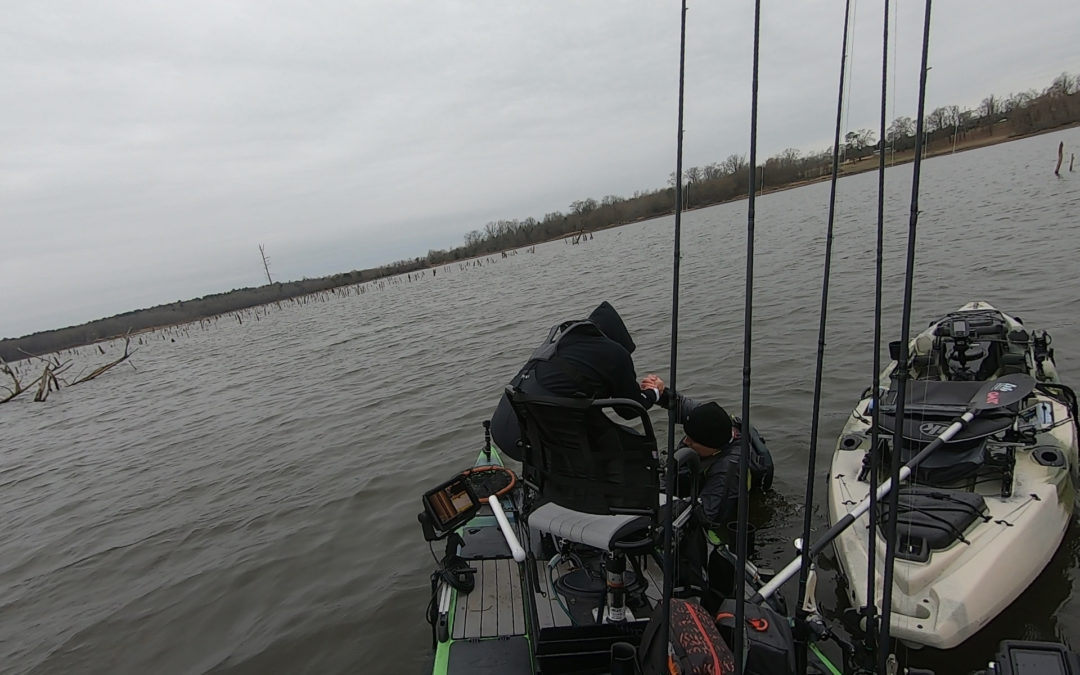 What can happen when you least expect it when kayak fishing.

It’s just another normal day to go fishing except it’s colder than normal, especially for Texas. We prepare for the cold as much as possible but how prepared can you be for the unexpected.

A nice, fun day of fishing can turn into a life or death situation in a hurry. A blink of an eye hurry. Are you prepared to deal with 49 degree water with 37 degree air temps? Do you have the required equipment like a PFD, whistle, mental and physical fitness to deal with an unexpected event like going overboard and turtling your kayak?

My wife and 2 friends were fishing a local lake New Year’s Day and it was cold. Look, Texans especially East Texas aren’t prepared for the cold nor do we like it. We like our hotter than normal weather. We all dressed the part for it being cold or as much as we thought we needed. I had a base layer of wind pants with sweats over those and bibs. Up top I had a t-shirt, long sleeve shirt and a hoodie with a beanie over my ears. Everyone else was basically dressed the same. Was it enough? Yes, but wet clothes don’t keep you warm right?

We go on about our day fishing and not catching and then around 11am it’s like a light switch flipped. The fish turned on and we caught some awesome fish and my wife caught a fish of a life time. I was so proud of her. She called me and I was about .75 miles away from her. I started toward her to take pictures and weigh her catch. She and I were on cloud 9. Our one friend, she had already left and we still had another friend out on the water. We take the pictures, videos and talk about the emotions of the catch and how proud I was of her. We release the beast and we go back to fishing. By this time the wind had picked up to around 4-5mph. We were down wind from our friend who was still fishing. He had just sent me a photo of his catch as well.

We fish for another 8 minutes and we hear a yell. We couldn’t make out what it was. I figured it was my friend who just caught another fish. So I paid no attention to it. It didn’t sound like a distress or anything. We keep fishing for a few minutes. My wife is 200 yards from me and she yells he’s in the water. I thought that’s what I heard but I wasn’t sure and I yelled at her “What did you say?”. No way was he in the water. He’s experienced, he’s in a stable kayak what could have gone wrong? Right? We don’t think about it happening until it’s to late.

She takes off to him and I am behind her going that way as well. I am pedaling as fast as I can go. It takes us 5-6 minutes to get to him. When we get there he is in the water with his kayak turtled. All of his rods were leashed, his crate was leashed, which are all great things so you don’t lose gear right? It’s COLD! He’s worried about his gear and I am worried about getting him out of the water. That was my first concern but his was his gear. Rightfully so, right? I had a bad motorcycle wreck and the first people on the scene told me that I asked about my bike, even though I was pretty mangled. So I guess that’s our instinct. He’s trying to help flip is kayak over, we are trying but with all the rods leashed, the gear leashed it made it almost impossible. The rods were getting hung on the stumps and creating drag under the kayak. The kayak was filling with water which added weight as well. My wife was working to get the rods un leashed and the crate. I am telling him to get out of the water and trying to help flip his kayak over. It seemed like an eternity but we got it all upright and saved his gear. I then pulled him into the front porch of my BlueSky. I am not plugging here. I am simply telling you that I am not sure I could have got him out of the water in any other kayak by myself. After I got him out of the water we start back to the ramp. We are a few miles from the ramp. He’s doing ok, but he’s cold and shivering. He’s on the front of my kayak and the nose is in the water so pedaling was tiring and slow. We were going about 1.5-1.8 mph. My wife is towing his kayak with hers. I ask him about his keys and he tells me they are in his truck. I tell her to go ahead and get his truck started and the heater on. He didn’t bring any extra clothes and his were wet. Who really prepares for this to happen? He was shivering like crazy and his head was cloudy. The only thing I knew was to keep him as warm as possible and keep him talking. I tried to do both. We got to the ramp finally! It seemed like an eternity. He walked to his truck under his own power which was great. He was alert and talking. He was cold, he was freezing cold. I venture to say he was in the water for 10-15 minutes and another 20-25 minute ride back. 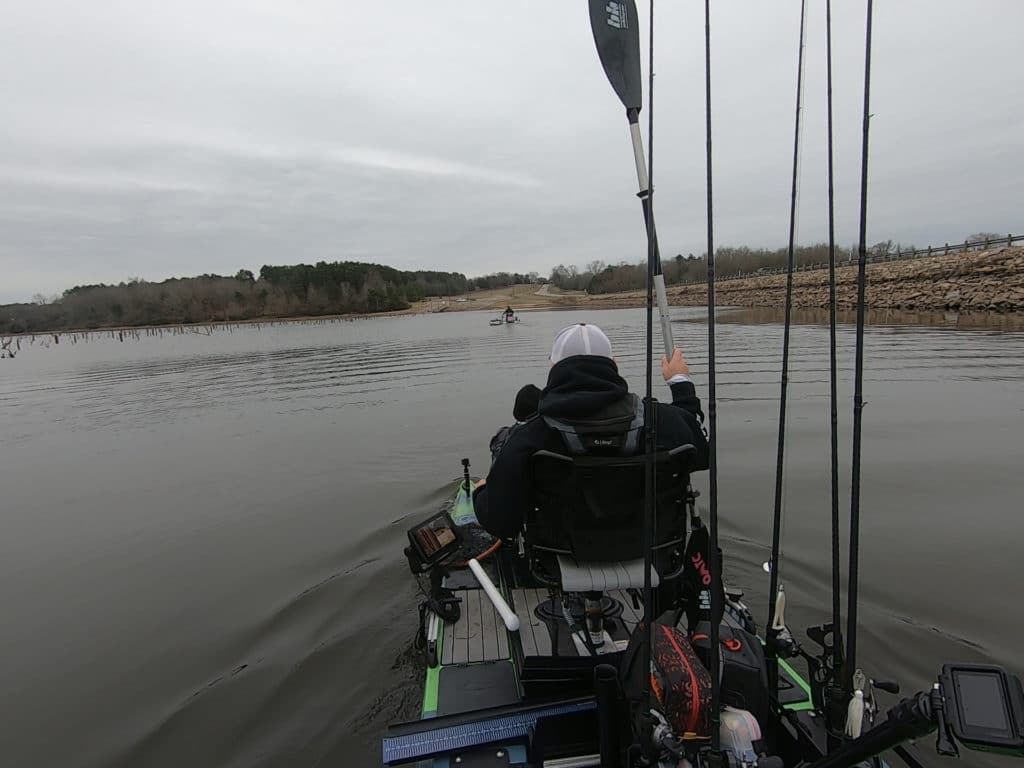 Once again who really prepares for this! I mean I would like to think I am prepared but am I? Do I have the mental strength to deal with all of this going on at once? When things go from perfect to life and death in a split second what am I going to do? Do I have a game plan? What’s first? What can be replaced? Everything else. What can not be replaced? My life! 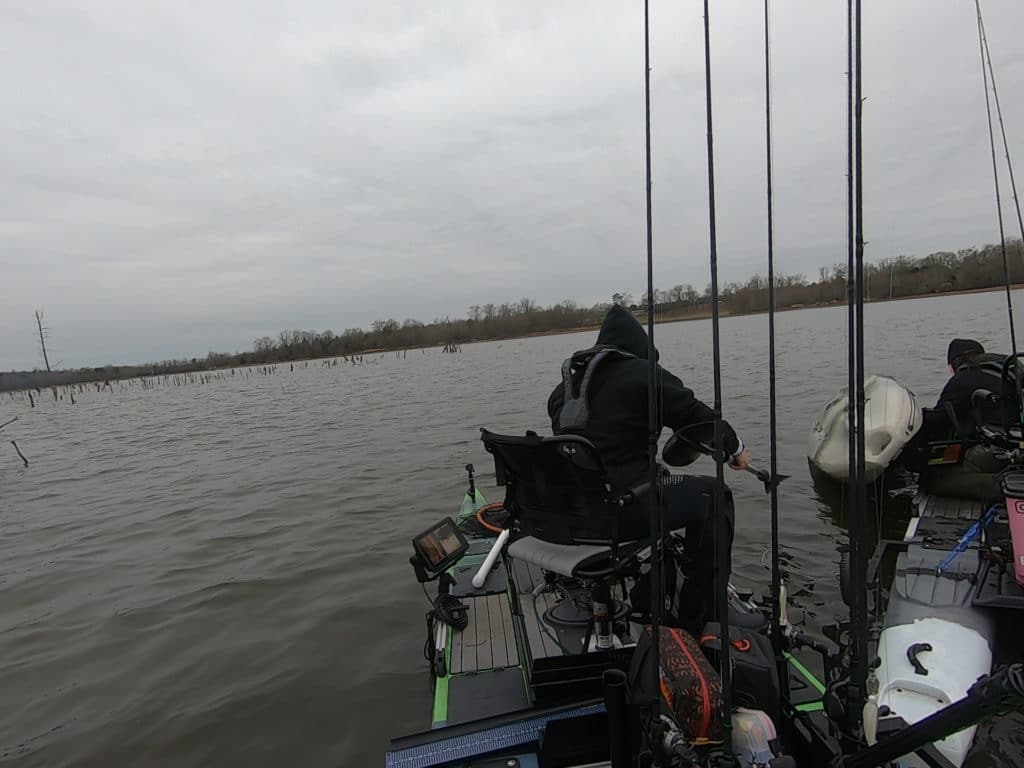 Here are my take aways from the situation.

1. Always wear your PFD! He was, which was a life saver.
2. Carry your whistle and have it accessible. Trying to tell or scream when you are shocked from cold water is hard and your voice is hard to pick up.
3. Know how to re enter your kayak. Practice, practice, practice.
4. Breath- that’s the first thing you need to do. Do you wear a face mask? Soak it and try to breathe, it’s impossible.
5. Is leashing your stuff down really that important in the overall scheme of things? This situation it almost proved to be disastrous.
6. Is kayaking alone really that safe? Who knows what would have been the outcome if there wasn’t anyone to help?
7. Mental, physical and spiritual fitness. Are you prepared? I can tell you I was out of shape to pedal non stop back to the ramp. My legs were on fire! And still sore a few days after, even while typing this. 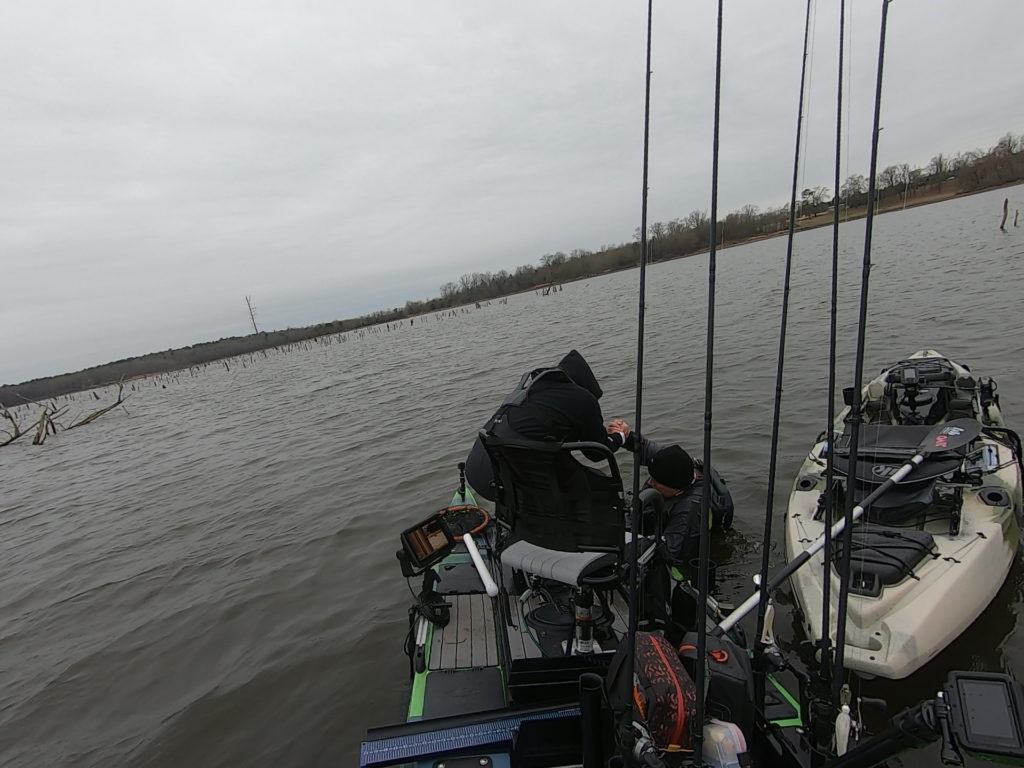 The conclusion of this was positive, thank you Lord. This was also a learning experience for everyone involved.

Stay calm, stay collected, know what to do next, know what your next 5 moves are and the possible outcomes of each.