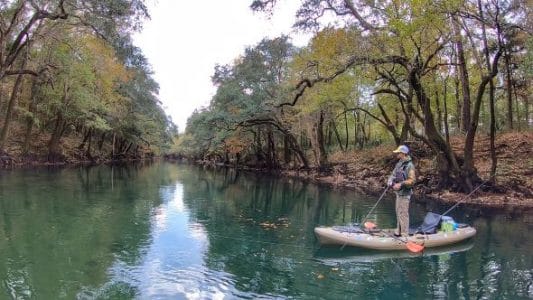 This is my recount of a day of kayak fishing on November 18, 2017. This day turned out to be better than I could have ever dreamed.

It was a crisp fall morning with plenty of sunshine to warm things up a little. My dad, uncle and I drove down from southeast Alabama to a place we had floated many times before, the Chipola River near Marianna, Florida. We unloaded our kayaks and loaded up our gear. My dad and uncle brought their Jackson Kayak Coosa HDs and I had my OG Coosa. The Chipola River is a very scenic river with a unique range of habitats. It is a spring fed system with 63 freshwater springs making its waters crystal clear at times. Hardwood forests and limestone bluffs line its banks. Even a few caves can be seen while paddling some stretches of the river. There are also numerous limestone shoals that make prime habitat for shoal bass. The Chipola River is the only river in Florida with a naturally reproducing, genetically pure population of shoalies, as many anglers refer to them. Although it is a beautiful float in and of itself, the shoalies are why we come and what we target. 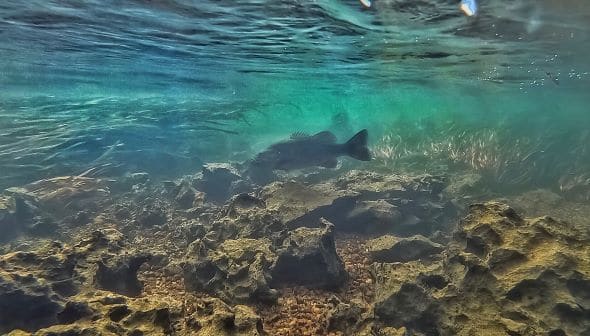 As we left the put-in paddling downstream, I noticed the water clarity was extremely clear. This makes fishing difficult at times. Lucky for me, the shoal bass were feeding early as I caught a nice 2 pounder in swift water around some limestone rock. I was instantly reminded how hard these fish fight and how perfectly camouflaged they are as I released it into the native eel grass. 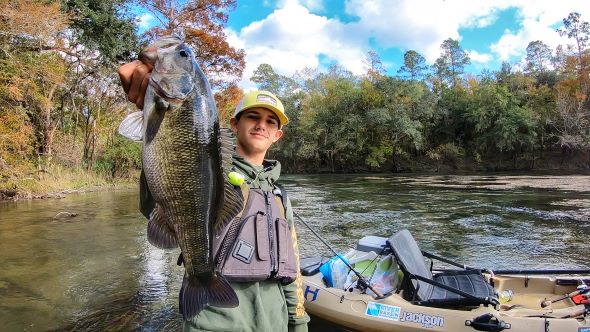 (First decent shoalie of the day)

A few bends downstream, we came to a stretch of the river with no shoals and very little current. This is a spot we normally don’t catch much, but I decided to fish it anyway. As I stood in my Coosa casting, I noticed a tree buried in the water. I pitched my jig into the clear water which was like looking through glass. As soon as my jig hit bottom, I saw a large shadow come out from the tree and felt a big thump on my line. After a good fight, I landed a 5+ pound largemouth. My dad took a few pics and I released her back into the cool water then paddled on. 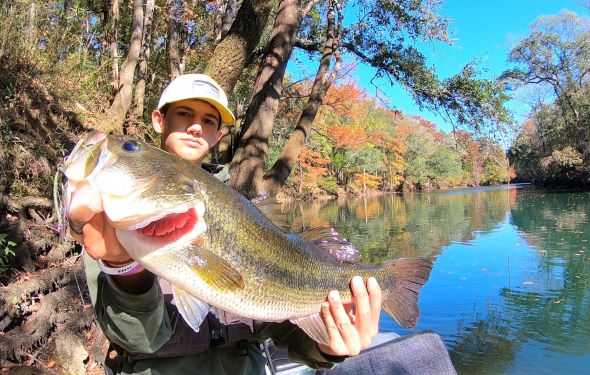 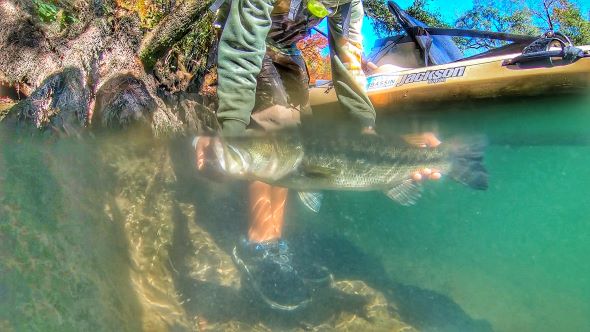 (Releasing her into the clear Chipola River waters)

As the day warmed up, the fishing heated up as well. We all were picking up decent sized shoalies along the way. We reached a set of shoals that we always look forward to fishing. I noticed two shoal bass swimming to the right of my kayak. I managed to catch one, flip it in, and quickly pitch my jig to the other who was waiting his turn.  We talked about what a great day we were having but little did we know the best was yet to come. 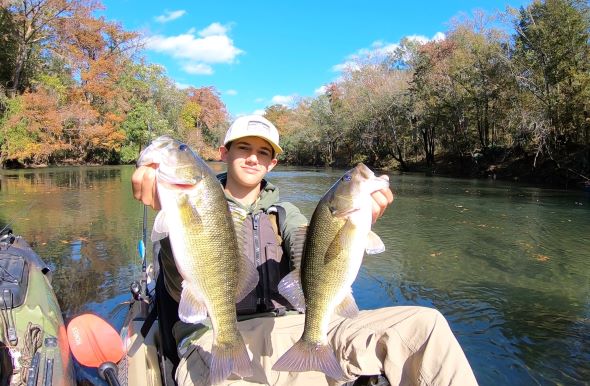 (Back to back cast shoalies)

After a quick lunch, we resumed our float. Since the days are shorter in November, we had to keep moving in order to get to the take out by dark. I remember the action slowing down at this point in the day. I was standing in my Coosa looking down into the clear waters of the Chipola when I spotted a decent fish swimming under me. I flipped my jig ahead of it and he quickly ate it. I set the hook and my line snapped. After digging through my tackle bag, I realized I had just broken off my last natural colored jig. I managed to find one jig in my bag but it was black and blue, which is normally best in muddy water. This jig was without a doubt not the ideal color for the clear water of the Chipola or so I thought. 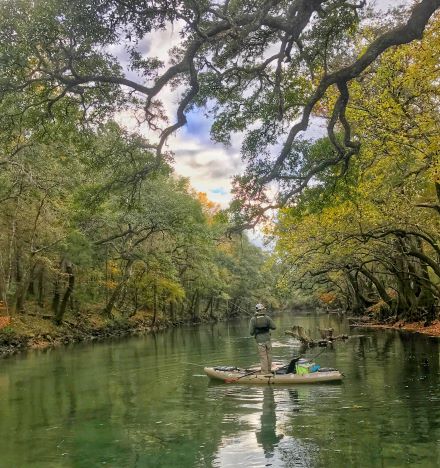 (Floating under a beautiful canopy)

As I came up on the last stretch of shoals, I fished hard but with no luck. I blamed it on the black and blue jig. At the very end of the shoal, a once in a lifetime moment occurred. There was a tree stretching across the river except for a small gap on the left side. This created an eddy on the right side. The shoal dropped off into deep water right before the tree. I cast my black and blue jig on top of the shoal and let it drift along the shoal to the drop off. Once it got to the drop off, it started to fall but never reached the bottom.

I felt a massive thump on my line so I reeled down and set the hook hard. The hook set pulled me into the eddy and the fight was on. The hard-fighting fish peeled drag and dove straight to the bottom. I fought her for about 15 seconds before I saw her. The water was super clear so I could tell it was at least a 5 pounder. I remember yelling to my uncle “it’s at least a five.” She ran under my boat and then came out and surfaced for the first time. This was when I realized it was a giant shoalie. When she surfaced, I sat down hoping to land her. She started to head shake on top of the water heading my way. My jig flew out of her mouth when she got about a foot away from me. I quickly grabbed her by the mouth, pulled her out and said a quick, “Thank you, Jesus!” I put her in my kayak and paddled to the river bank where my uncle was waiting. He took one look and said, “Dude, I think you’ve just caught the state record.” 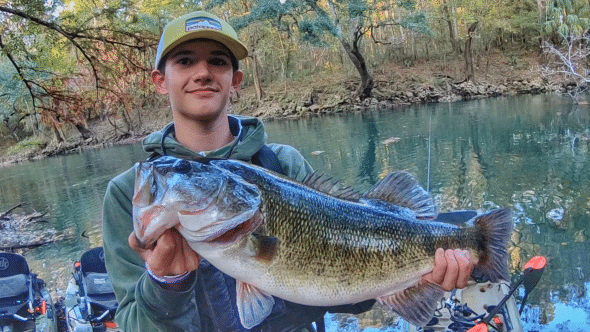 My dad had floated a couple bends ahead of us so we called him. He paddled back upstream to get some pictures and suggested we call the Florida Fish and Wildlife Conservation Commission (FWC). We finally got in touch with an FWC office who took our contact info. We waited for a biologist to call us back as we made our way to the take out with the shoal bass on fish grips. As we neared the take out, Katie Woodside, FWC Biologist, called my dad. She was excited to weigh a possible state record but traveling from Panama City it would take her over an hour to arrive at the landing. As we waited, two fellow riverbassers, Will Clements and Jackson Kayak teammate Travis von Neumann arrived. They, along with Jackson Kayak teammate Jean Wilson, were planning on floating the same stretch of river the next morning.

As the sun went down, it got very dark in the backwoods of Calhoun County, Florida. Katie Woodside arrived and we huddled around as she placed my bass on the certified scales. With only her truck lights shining, we waited for the official weight. My bass weighed 5.95 pounds breaking the previous record by almost a pound. We all shouted with excitement and passed around a few high fives. Katie took a few other measurements and a fin clip. I then released my new state record shoal bass back into the waters where she likely still swims today. 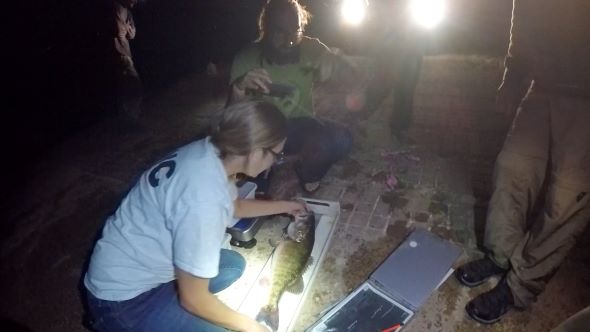 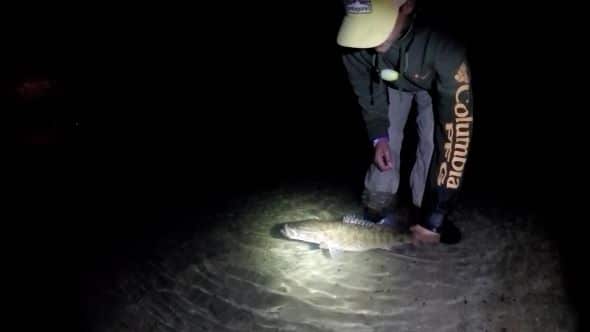 (Releasing my newly caught State Record back into the Chipola River)

So next time you have the opportunity to go kayak fishing, get out there! You may catch something bigger than your wildest dreams. Tight lines, yall!