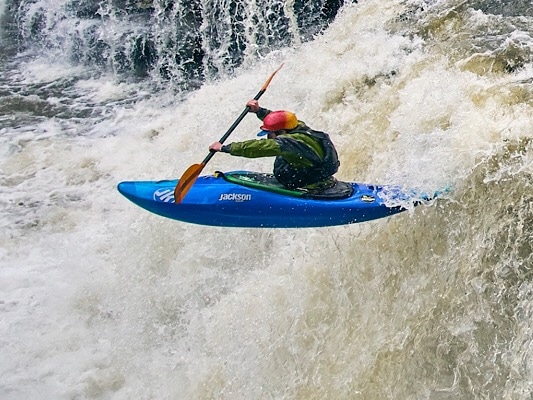 When I first saw the Antix at Gauley Fest when it was being prototyped I was a little shocked by its looks. I mean, it wasn’t exactly sleek looking. It wasn’t slicey. The hull was flat but with weird rocker. It didn’t look fast. It looked way playful and was supposed to creek. It had some things going on but nothing that that stood out. When I finally paddled it, the Antix was as unique a boat as any of its class, if you could classify it.
I opted for the large weighing 185 and 5’10”. Height and size matters greatly in choosing this boat!!!!! At my size and skill level at the time of the boats release, I immediately cruised down all my favorite class five creeks and was doing kick flips, splats, and stern squirts along the way. The boat was zippy, glidey, turny, and responsive. Loads of fun.
But, things go from wicked fun to wicked scary in the Antix, especially if the run is difficult for you as a paddler and you push it a little too much. And this is where the Antix, along with the other playful creek boats, have serious drawbacks.
The Antix almost laughs at creek boating. It is lighter, easier to boof, turns on a dime, and surfs. But once you cross that threshold of having too much fun it can land you in some serious situations. For instance the large Antix boofs me great but I jumped in the medium for a casual run down the Meadow and ate it in a hole doing more freestyle than I wanted ending in a swim! Another day I hadn’t been paddling hard for a few months. I got out for a quick run on Manns, a solid class V run which I had done many times before in that boat at some very high levels. But this day I had a weird line, while doing a stern pirouette in the middle of Goliath, and got vertically pinned. I was okay but had to walk out.
So my final word on the boat is that it is fun. Uniquely fun. It is not a RPM, Axiom, Ripper, Sleek, or whatever slicey stern boat. At 185, the Medium Antix is a fun playboat on the Gauley every once in awhile. The Large gives me giant kick flips and an energetic day on the creek. The short stern allows me to squirt in shallow water. The high rocker surfs Many waves blasting up the green. Where it is not fast in Top paddling speed, it makes up for it with quick accelerating turns.
As far as the slicey vertical stern squirt, the large is a brute to stern squirt at times at 185lb but in good current goes quite nicely along with splats. The medium is a fun surf boat giving up lots of spins and some loops in the right spot. They boat kick flips really really good too.
I feel most paddlers would enjoy the boat if they gave it a chance.