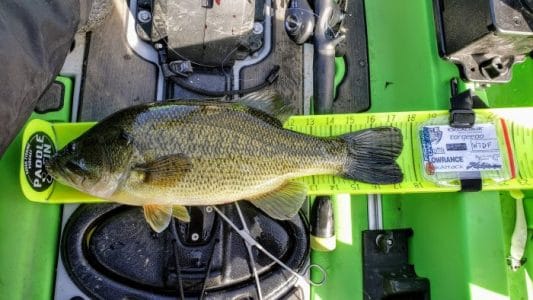 First let me just say how great it was to see everyone out there since I had taken the 2018 season off from tournaments. The bite was extremely tough and there were some victors that would claim some sizable paydays. As for me though it would be a top ten finish among some pretty stiff competition. The conditions the day before the tournament were down right unfavorable due to 25-45 mph winds. Everywhere you looked there were white caps breaking all over the lake. To take the kayak out in this type of weather would be insane, even if you had a motor. I instead went to another lake located at the campground I was staying at with friends and prefished there since there appeared to be more coverage around the lake to block the wind. We only fished for a few hours but we all ended up catching fish. It was great to me because I still hadn’t caught any bass all year in my Jackson Kayak BigRig HD/FD. Sliming the kayak was a satisfying feeling to say the least largely because 2019 has been so hectic for me up to this point and I hadn’t gotten a chance to get out yet.

Come tournament morning it was a balmy 34 degrees with a projected high of 55 degrees. Winds were to be 7-10 mph but ended up being more like 5-15 mph at times as the day progressed into the afternoon. The water temps were in the range of 51-54 which can be tough to get a bite. I was keeping to the game plan of being ready to change lures and colors when it called for it. The morning bite for me just wasn’t there. I threw a combination of chatterbaits, swimbaits w/ underspins, jerkbait, crankbait and a swing jig creature bait and nothing, not even a bite. This would go on for a few hours. I of course was already thinking of my warm bed a few hours north. I was second guessing myself like usual and moved into an area that has a pretty sizable hole that I only knew to be promising considering I had caught my personal best (22.5in LG Bass) the year prior. I was throwing the crankbait mostly because in the Springtime this is my favorite lure to search with and because I prefer power fishing. As I crept into the corner of the spot I hooked into the biggest fish I would catch that day a 17.5in bass. I was very happy at that point but I still had 4 more to catch. I threw the crankbait some more but would come up empty so I continued to switch it up and see what might work. The winds were pushing from all directions. One minute it’s from the south and the next it’s form the east. It was annoying but you can only work with the wind so I started doing drifts and casting a ton. Again for a couple hours I wouldn’t get a bite. I ran into some of my buds from the group that was comprised of 4 of us. A few of the guys were already on there 2nd and 3rd fish and were all pretty much throwing the same things that I was so I kept at it except I had discarded my jerkbait and tied on a weightless texas rig senko (Crabby Bass Lures Whacker) in black and red. I started working the cattail grass lines along the shore and I found some luck in a channel that would help me get into the top ten. I caught a 15.5in bass on the point and then another 13.5 bass not too far form there. I moved a bit more down the grass line losing a 4th fish, right at the boat as I went to net it, that would have been a 15-16in easily. I was less than happy with the situation and after a short manly tantrum I moved on. Sadly that was to be my limit for the day and I was mostly OK with it which is a great step for me considering how bad I can get with myself on the failure of it. I just wanted to catch 5 fish. Whether I won or lost was not as important as putting the minimum in the yak. I measure myself on that standard first always as I’m sure most of us do. Upon returning I am hearing that a lot of the anglers had just as hard of a time getting on fish as I did. As the results were released I was surprised to hear that 15 of the 30 fishermen didn’t catch any fish. I couldn’t believe what I was hearing. There were some heavy hitters in this tournament that usually spank me due to their experience and time on the water. I was like well there might just be a chance. 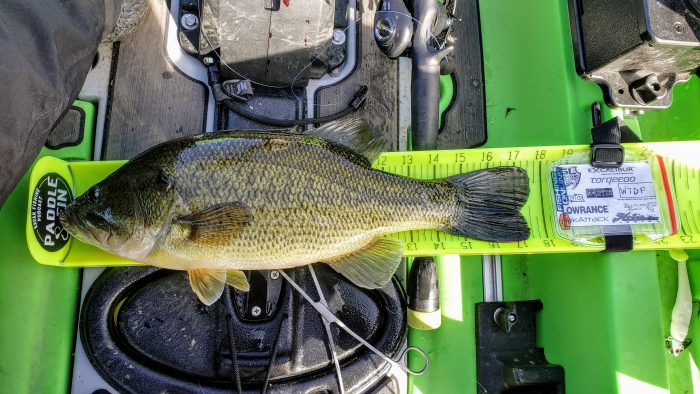 In the end I would place 9th behind some of my crew and it was rewarding to know that 3 of the 4 of us place in the top ten under some difficult conditions and that was fine by me.