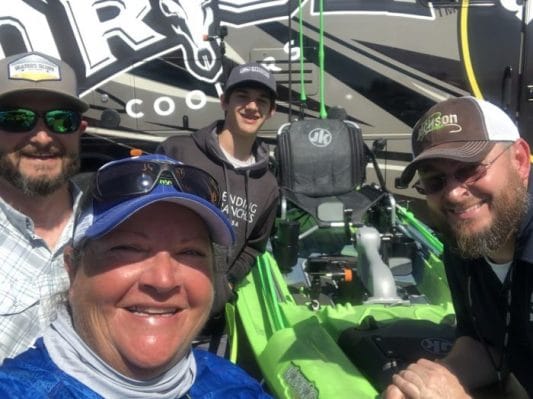 I had a blast representing Jackson Kayak the weekend of March 9-10, 2019 at the FLW Tour Event at Lake Seminole in Bainbridge, Georgia where JK founder, Eric “EJ” Jackson was competing. Jackson Kayak Fishing Team mate, Robert Brown of Huntsville, AL, who has worked these events with EJ all over the southeast, was there to show me the ropes. This was a totally new experience for me. I was not at all familiar with bass boat tournaments except for seeing the occasional photo of anglers holding up their catches on the podium. With the recent announcement of a partnership between Kayak Bass Fishing and FLW and with the ever-evolving nature of kayak tournament fishing, I needed to at least acquaint myself with the format and the experience. And it was quite an amazing shindig! The city of Bainbridge opened up their Earle May Boat Basin Park with free admission and it was filled with vendors, food trucks, bands on stage, all sorts of fishing related companies on hand along with big names in the industry. There were games for folks of all ages to play, including a kids fishing tournament, corn hole competition and flipping/pitching buckets to test your casting accuracy and skill. 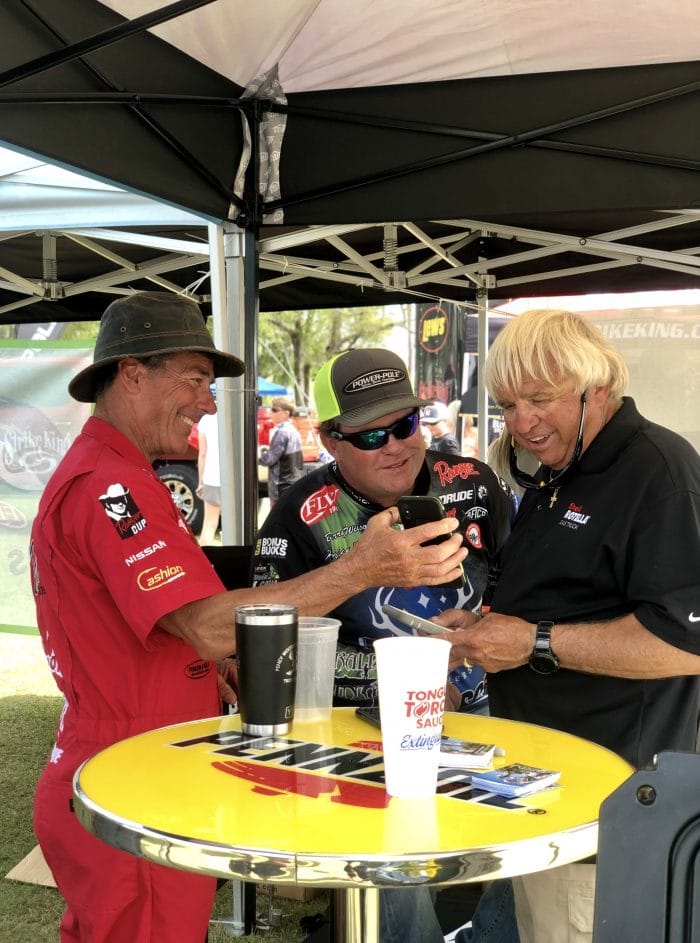 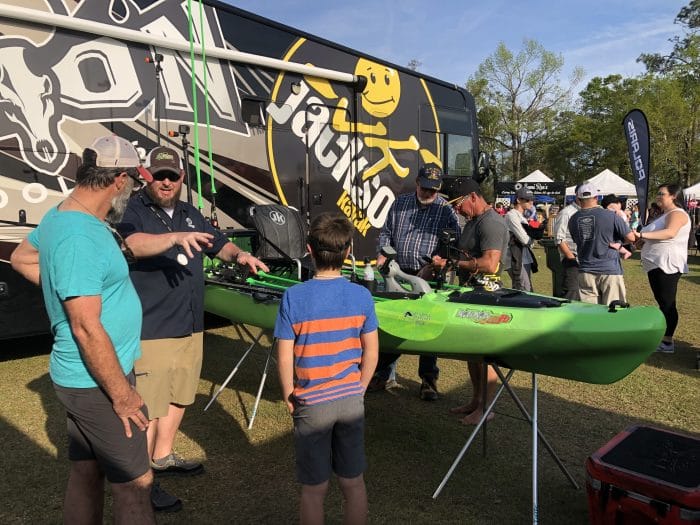 Robert Brown going over the features of his Big Rig HDFD.

What a great way for families to make a day of it while the anglers competed before the afternoon weigh-ins.

Robert’s new and fully rigged Big Rig HDFD, on display beside EJ’s RV, was a huge hit with the crowd! We spent the days chatting with folks about our kayaks and this recent addition to the JK lineup. This feature-rich and versatile kayak is really amazing! We demonstrated the Big Rig HDFD’s three options for propulsion with the different pod configurations. For just paddling, the HD pod provides a flat open deck and foot-controlled rudder. The Flex Drive (FD) pod is for pedaling forward and reverse, with an articulated prop that adapts to shallow water and obstacles and with this option the rudder is controlled by hand. With a quick removal of the upper FD unit the third option is the drop-in of the soon to be released E-Drive motor which provides true hands-free fishing with foot controlled rudder. Robert had all his gear set up on the kayak as if he were prepped for a tournament. His multiple rods were easily reached on his JKrate, Yak Attack Omega Rod Holder and in the protective built-in double rod stagers along both sides of the kayak. A huge plus for fishing overhanging limbs and vegetation. He also had his Raymarine Element, Nocqua batteries, Power-Pole Micro Anchor and multiple GoPro cameras installed. It was a very impressive set-up that would make for a great day on the water in any situation. Seeing his geared up kayak in person and getting some hands-on time with the electronics was very helpful to me. 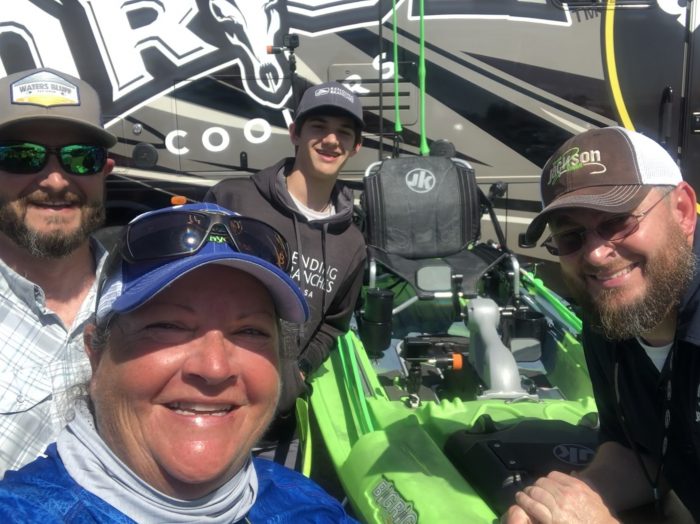 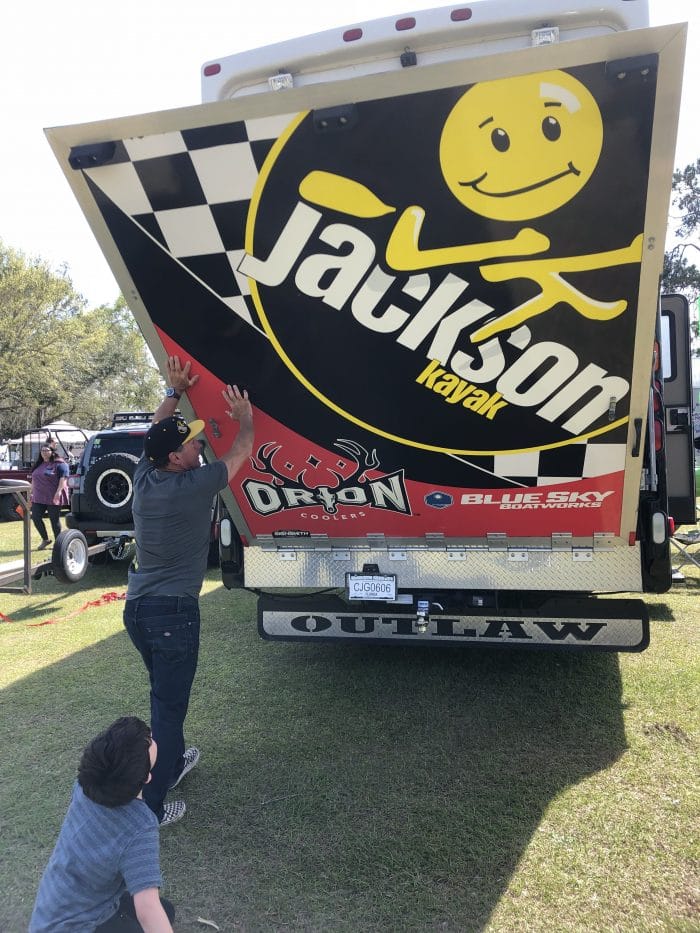 EJ and son, KC, let down the back porch on the RV.

It was such a pleasure to be warmly greeted by Kristine Jackson, EJ’s wife, before she had to drive back to Tennessee to take care of duties for the whitewater trials. Their wonderful son, KC, introduced me to the dogs of the house before heading out to ride the carnival rides. EJ arrived back from fishing with giant hugs of welcome, boundless energy and time for everyone!  He is as vibrant and engaging in person as he is on camera! Even though he didn’t make the cut to fish Saturday, EJ was in the money for the first time in his pro career!

Read EJ’s account of his days of competing and his mindset at the Lake Seminole event:

To top things off, father and son JK Fishing Team members Clay and Sheldon Grace from Headland, Alabama arrived and immediately jumped in to help us with the crowd. Fifteen year old Sheldon is the reigning state of Florida record holder for largest shoal bass that he caught from his Jackson Coosa on the Chipola River in 2017! You better believe that we were all ears as he and Clay provided great stories of their river fishing escapades and lots of invaluable fishing advice. 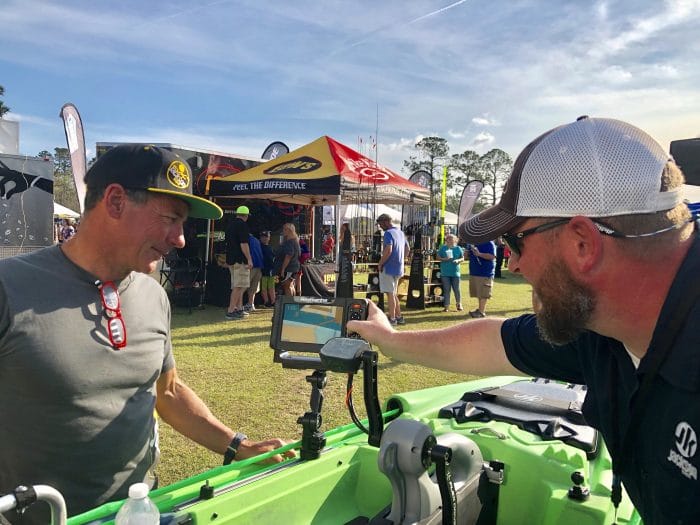 EJ and Robert go over the Raymarine Element on the Big Rig HDFD. 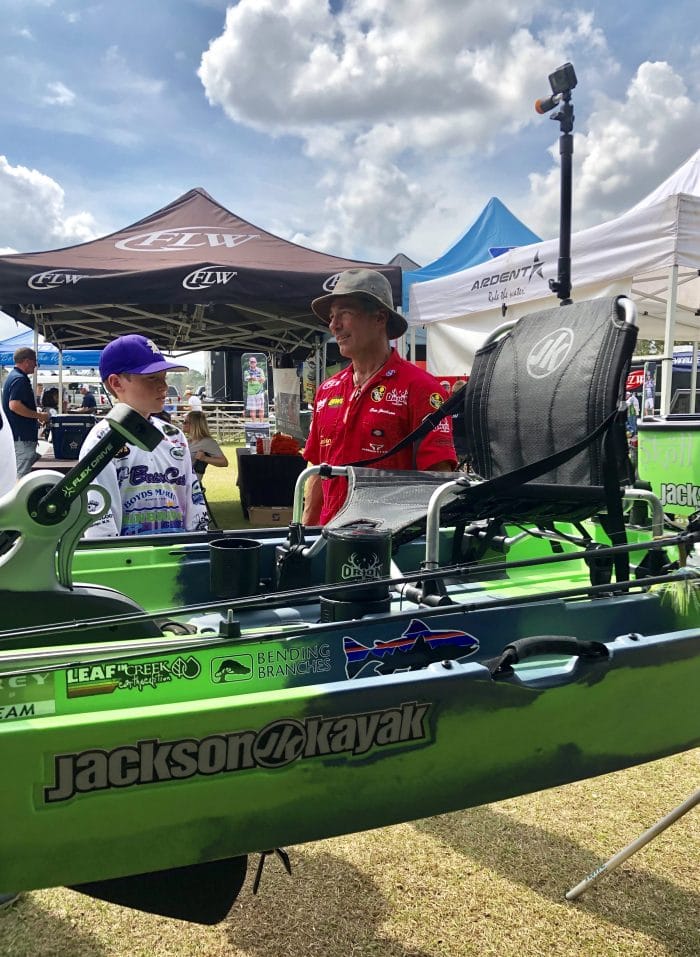 Chatting with anglers, young and old, about the Big Rig HDFD.

It was really great to meet so many new folks who were previously just social media friends or that came by to talk kayak fishing. I was even approached by a young fellow named Avery Wheeler who remembered me from several years back with a chance and brief meeting from afar on a lake in Tallahassee, Florida. I had been fishing from my kayak in a secluded spot when two young guys in a bass boat approached from a distance and saw me catching nice bass, one after another, on a magnum speed worm. The fish had been very active for quite some time and seemed to be stacked in this particular spot. When I realized that the fellows might be in a tournament I invited them to take my spot and have at them. My quota of catch and release fun was satisfied and now it was their turn. We never introduced ourselves as I paddled off so I’m not sure how he knew who I was. But it sure was nice of Avery to approach me all these years later to let me know that he and his friend really appreciated that encounter and to say thank you. Now that’s pretty cool! 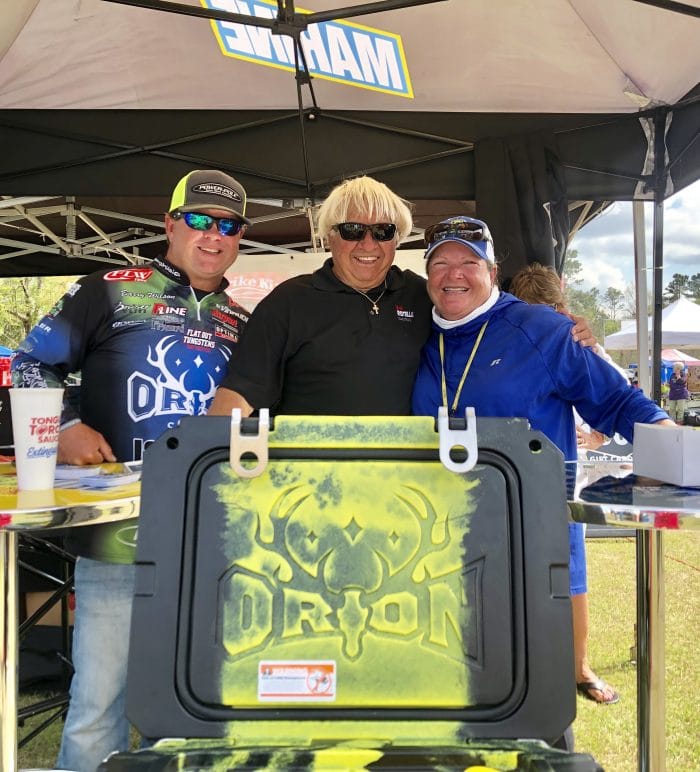 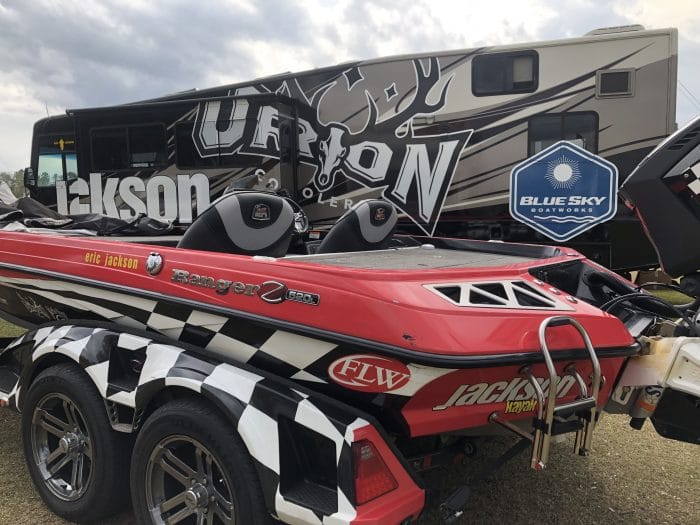 Tools of the trade.

On the final day of the FLW Tour, with the field of competitors narrowed down to ten, we got up on the televised stage with EJ to help him give out fifty hats. He needed no help in pumping up the crowd! They were an excited and happy bunch enjoying the festivities. EJ gave us all generous introductions and even mentioned my 15 pound largemouth bass Hall of Fame catch! There were also announcements of the raffle winners of a beautiful Coosa FD and Orion Cooler and give aways of rods, reels and other goodies that Jackson Kayak donated to the event. 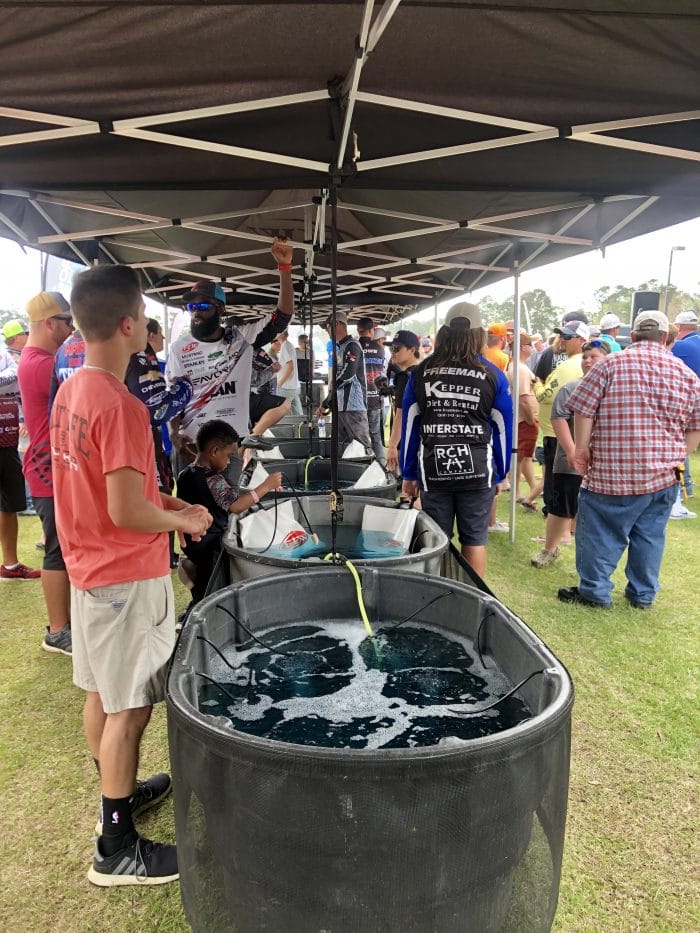 The top ten competitors hold their catches in the tanks before the final weigh-in.

Getting ready to give out hats and prizes.

When the anglers arrived with their catches in bags they gathered under a tent that shaded the bubbling tanks of water that keep the fish alive while waiting on the results show. Fans gathered around to get coveted autographs. One by one the anglers were called up on stage to have their fish weighed, to talk about their day and to give thanks to their sponsors. Then the last competitor, Brian Latimer, took the stage and when his five fish stringer was weighed and his totals were added to pronounce him champion there was such an explosion of emotion that overtook him and his family on that stage! The crowd was ecstatic! Tears of joy flowed freely as he had his well-deserved time in the spotlight. Like an exclamation point to the excitement, a thunderstorm that had been threatening the ceremony chose that moment to open up and downpour on the crowd. Despite the rain, Brian took his time and expressed gratitude for his hard fought win. 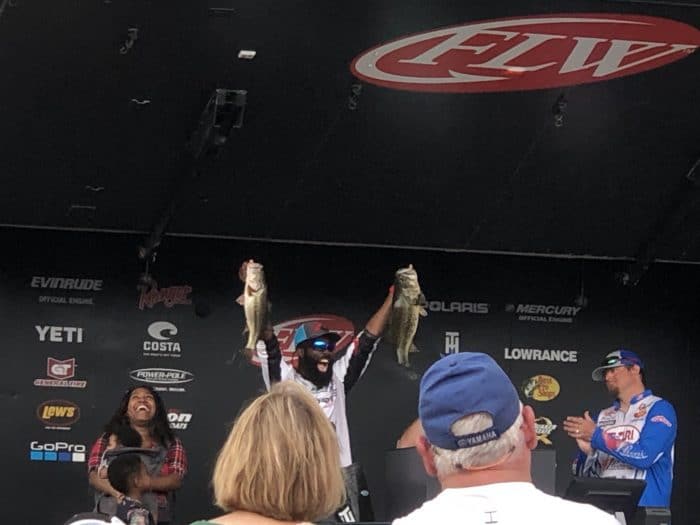 Brian Latimer and family celebrate his victory at the FLW Tour at Lake Seminole.

What an incredible experience this was!  I got out of my comfort zone and experienced something totally new. I learned a ton of new things, had chance encounters and introductions. And I met incredible teammates that remind me why we call each other JK family.