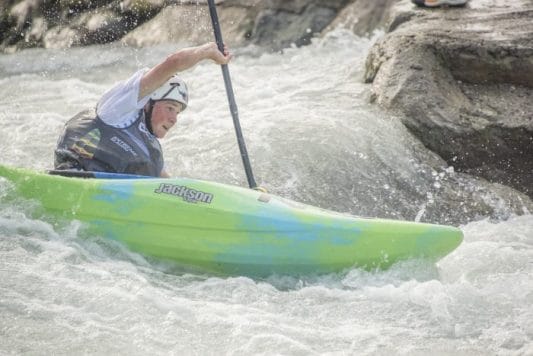 We are all faced with many decisions every day. Do this, don’t do that; be on time; a little late is ok. Take a chance; play it safe… Before I make a decision, especially one about kayaking, I always ask myself four questions, “what is the risk?” “ what is the reward?” “what is the probability of each happening?” and “what is the probability of something totally unexpected happening?” With the exception of things I’ve done many times before, I do this thought process before most of the decisions I make, and the outcome has been positive. 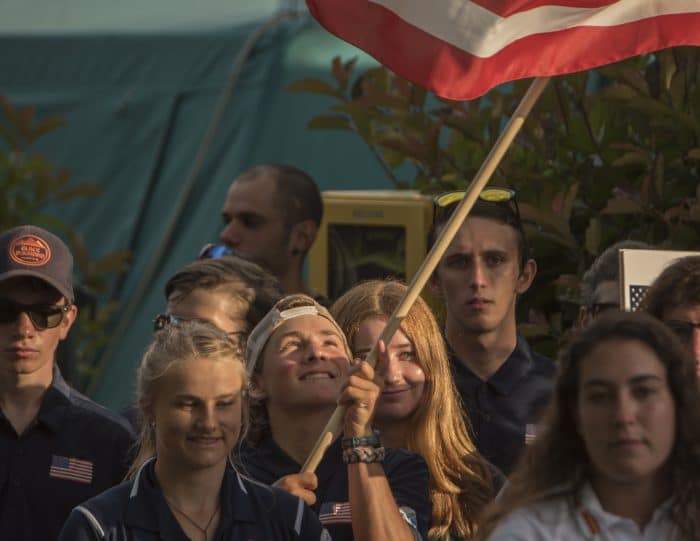 Now the reason I say this is because last Fall, I was faced with a decision that even though it didn’t have much risk, I was still very reluctant to do it. The decision was to try out for the U.S. National Whitewater Team for C1 Slalom. The reasons I was reluctant to try C1 were: 1) While I had paddled C1 for fun, I had never really done it on hard water in a slalom boat before, 2) My boat wasn’t comfortable, 3) I wasn’t very stable in the boat at all, and 4) I flipped a lot. However over some time, my family helped me realize that these reasons were very silly, and I would have fun doing it even if I didn’t make the team. So I signed up for Team Trials, and I trained as much as I could. And to my surprise, I paddled way better than I expected, and I did have fun. But the biggest surprise of all was that I earned a silver medal at Team Trials and made the U.S. Team. 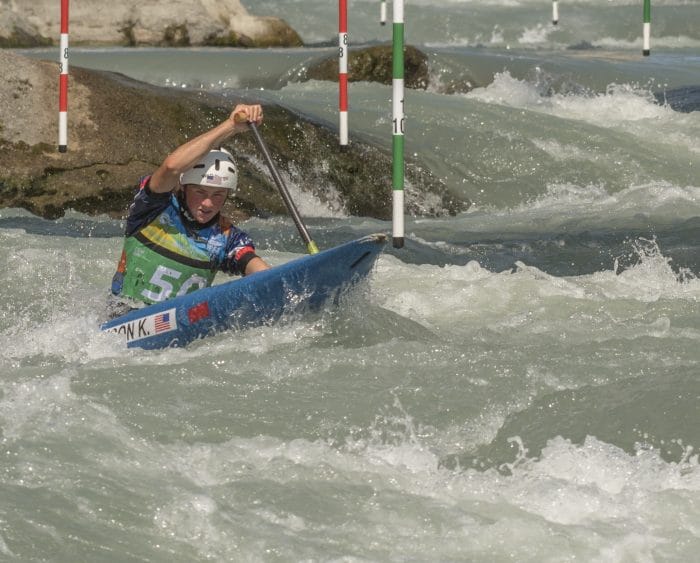 Four months and a hundred training sessions later, I found myself at the Junior World Championships in Ivrea, Italy. The opening ceremony was loads of fun. The ceremony began with a parade starting from the town square where we all ate gelato to show our appreciation for our hosts. All the countries were wearing their team uniforms and holding their flags high. Because I was one of the youngest paddlers on the team, I got to hold the U.S. flag as we marched through the streets of Ivrea and danced on the stage by the river.

After the ceremony, the racing began. My first race was in C1 against 53 of the best junior paddlers in the world. The way Worlds works is that you take one run and if you place in the top 20, you immediately move on to the semifinals. If you don’t place in the top 20, you get a second run to try and place in the top 10. If you place in the top 10 of your second run, you move on to semis as well. My first run wasn’t that bad. However I touched a lot of gates, and the penalties placed me over 20th place. This meant I would take my second run to try to make semifinals. On my second run, I was doing great. I was killing all the gates and padding fast. The only bad thing about this run was that I touched the last gate giving me a two second penalty. Even with the touch, when I looked up at the scoreboard my name was in second place. Good, but there were still more competitors to go who could knock me out. I got out of the river and kept watching the scor board. As the other competitors finished, my name moved down the list from second to fifth to seventh to tenth. I was hanging on to the last spot almost until the very end, when C1er from Kazakhstan beat me. I ended in twelfth place, just missing the cut by less then a second. 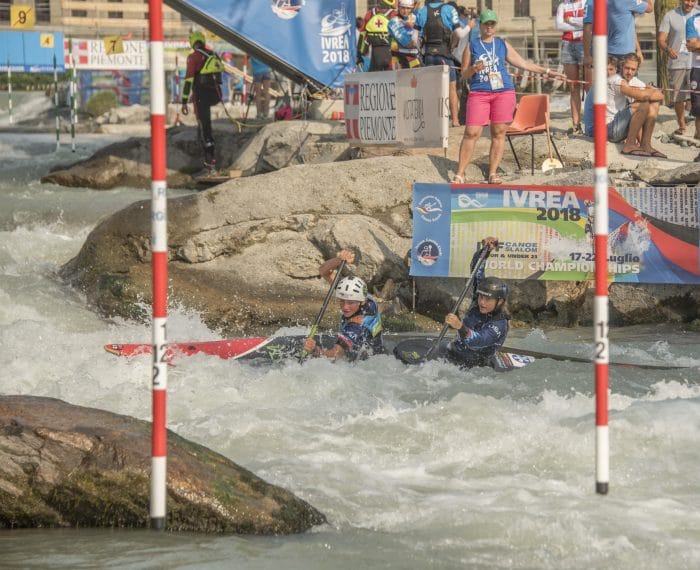 Even though I missed semis, I was stoked with my run and was excited because more racing was yet to come. I was on tap for C2 with friend and big sister, Sage Donnelly. Sage and I had spent lots of time training together in both freestyle and slalom, but never in the same boat. Still, we felt pretty good on our two (yes, just two- ever) practice runs together. The duck tape holding our boat together seemed to be in good shape, too!

On our first run, we paddled really well together up until gate 16. Sage was powering through a cross stroke and accidentally hit me in the face with her paddle. I was not totally in the game for the last four gates, but we somehow made them fast and clean and made it to finals- sitting in third place. 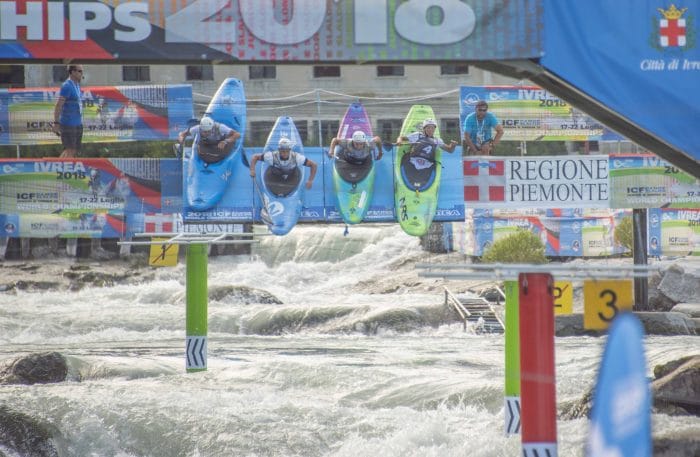 In our finals run, we started out fast. Unfortunately, after a few gates, our inexperience began to show, as we missed a gate giving us a 50 second penalty, and putting us in tenth place overall. While I was a little bummed, C2 is pretty cool and I hope to do it again!

Now onto Boater Cross! This was, by far, the most exciting race for me, not because of how I finished, but because of all the carnage I got to watch form the U23 race just before mine. When my time came for my first heat, I was really excited to be on the starting ramp with the whole world watching. Then everyone was quiet. Ready, Go! And we were off. I was paddling really fast and trying not to get hit by the other paddlers. When the finish line came within reach, I paddled even faster. I came in second and advanced to the quarterfinals. In the quarterfinals, I came in second again, putting me in the semifinals. I crushed it, almost winning, but spinning out to take another second place and moving on the finals. 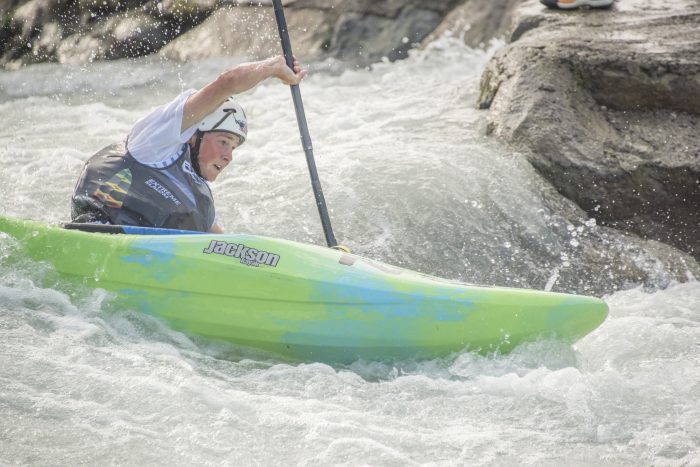 At that point, I was really excited and a little surprised because I didn’t expect to make it this far. In fact, when I looked back at my decision to try out for the team, I had no idea I’d find myself in the finals for anything at the Worlds. We all walked to the ramp and got ready for finals. We climbed up the stairs and waited, 10 feet above the water. Ready, Go! And we were off, flying through the air one more time. I was the fourth seed, so I had to paddle really fast to get in the main flow. At the halfway point, I was in first place… But as we came to the big drop, I spun out and two people passed me. I kept going, and when I came to the second drop, I was tied for third place. Now as the finish line came near, I was paddling I hard as I could, but unfortunately, it was not hard enough. I just missed the podium by one spot. While I was feeling a little disappointed, deep down I was pretty stoked. In my first World Championships, I had placed 32nd in the world for C1, 10th in the world for C2 with Sage and 4th in the world for Boater Cross. Thinking about the week in Ivrea, I look back at the path that I took to get here – starting with that one decision of competing or not.