The Battle of Big Bull Falls 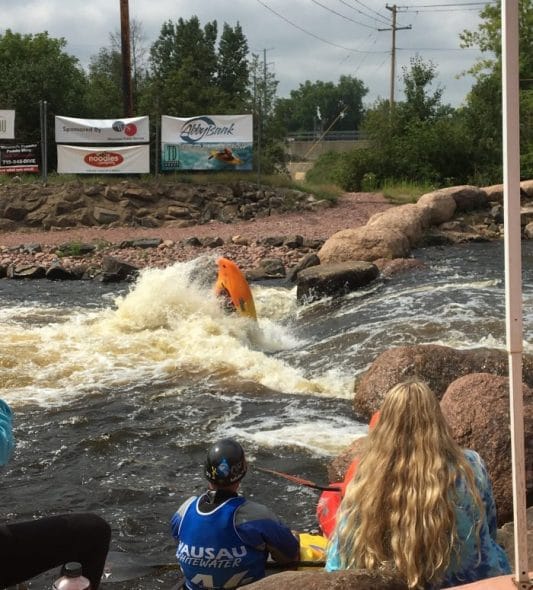 80 degrees and low humidity- Northwoods summers are hard to beat.  Which is why, every August boaters from all around Wisconsin and the surrounding states gather in my hometown at the Wausau whitewater park for the annual freestyle clinic and Midwest Freestyle Championship.  In years past we have even had competitors from as far West as Colorado (Don’t worry Paul, the women of Wausau voted and decided you are welcome back anytime…even if you aren’t from the exotic land of Quebec as -allegedly- advertised). 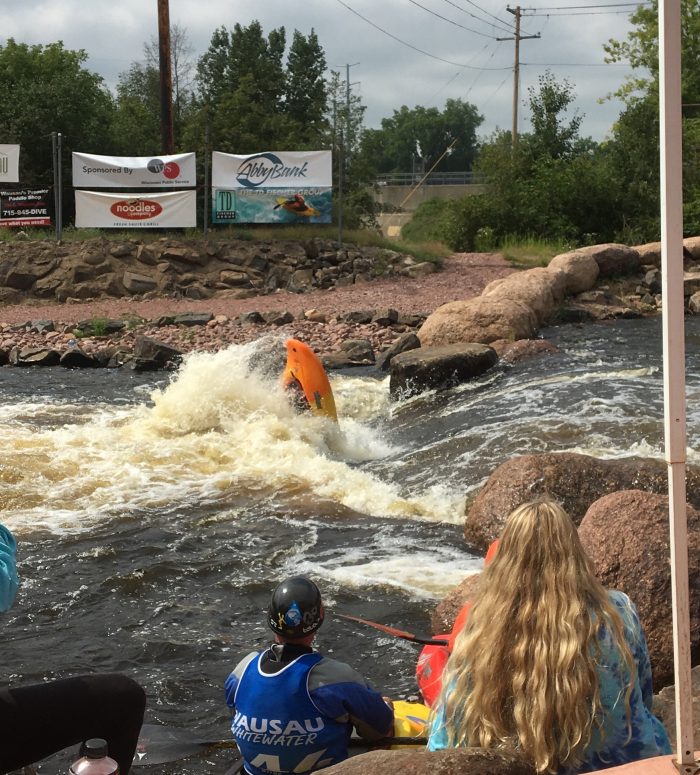 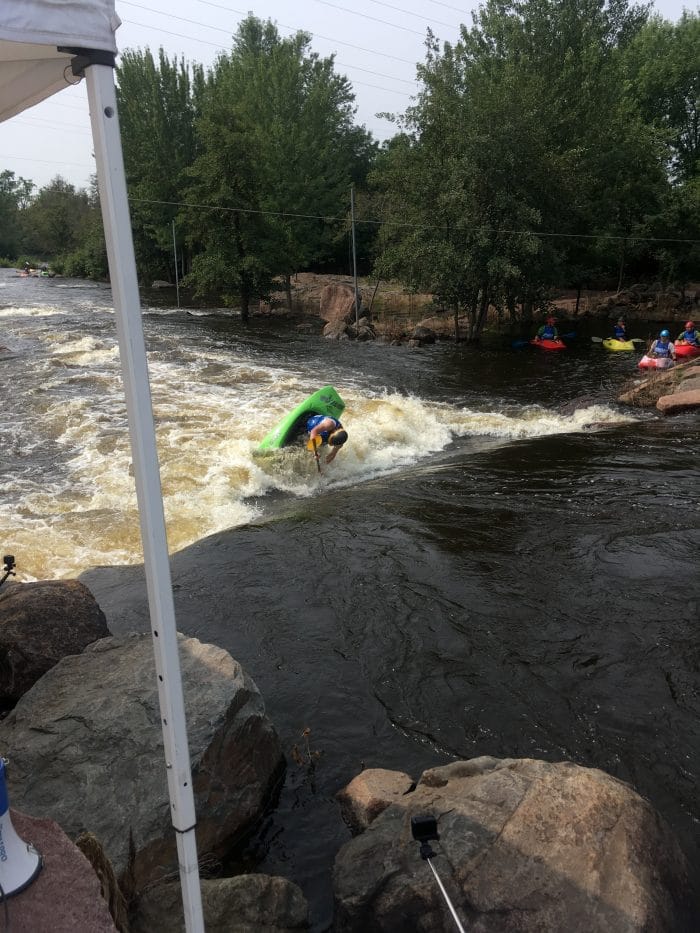 One of the young guns throwing down at 4th hole 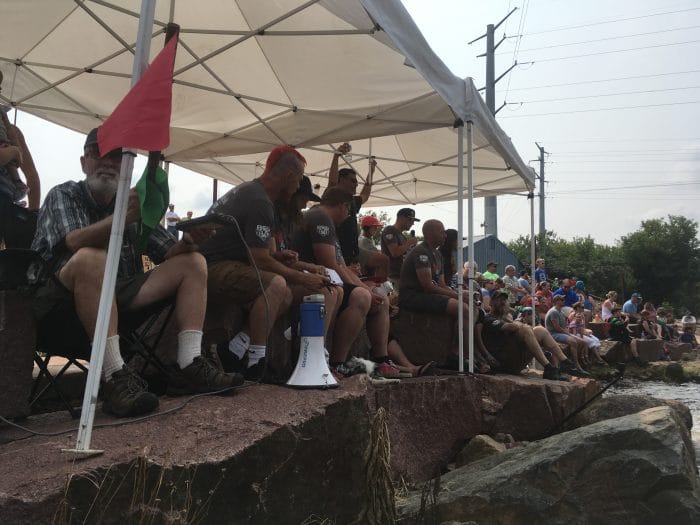 Some people are so judgy

Thursday and Friday releases commenced with some stellar freestyle instruction from fellow JK paddlers John McConville and Colin Kemp so everyone could hone their skills for the upcoming competition.  Full days of paddling left everyone exhausted…but not too exhausted for a bit of  campfire fun and festivities. 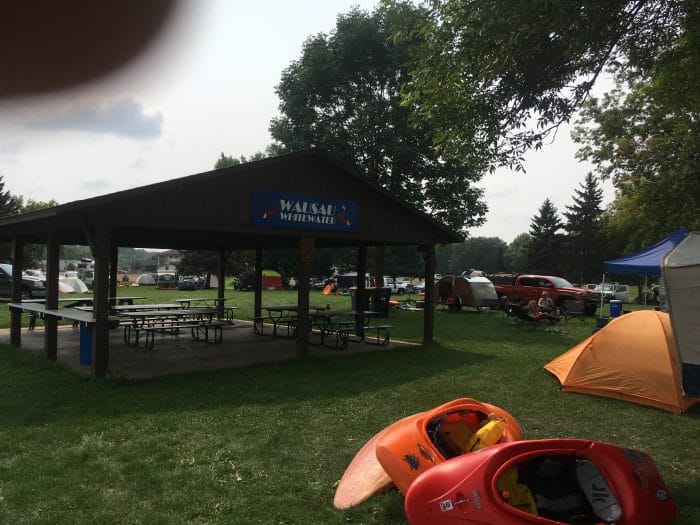 An eerily quiet camp…someone must be hucking big tricks 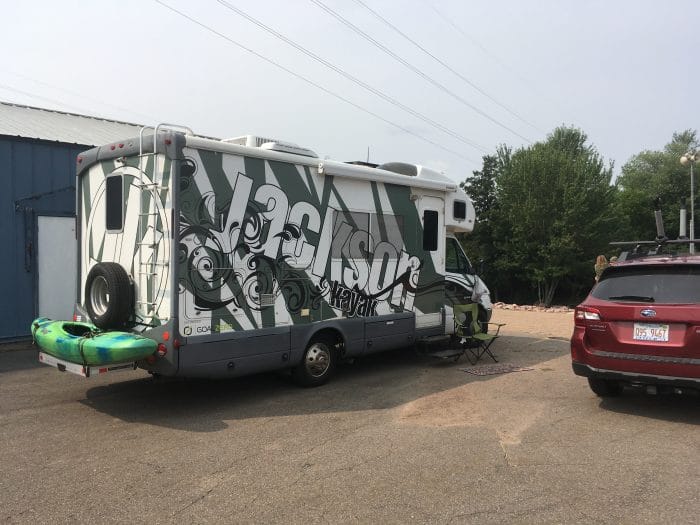 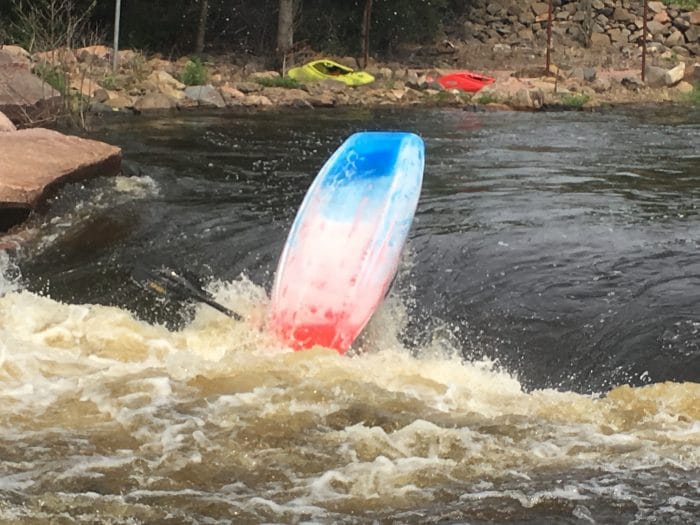 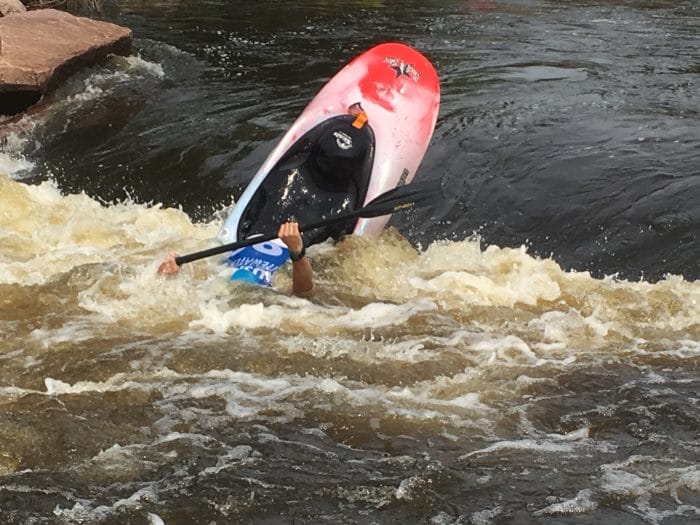 Saturday morning sunshine had everyone pumped and ready to show their stuff to the growing crowds.  When it came time for the Men’s Pro Preliminary round, the competition was friendly but fierce, and the scores were tight.  When the smoke cleared, 5 paddlers remained.  Brian Robin was in 5th place, Jim Jensen, after some fantastic redemption rides after a bit of Phelpsing the year before, found himself in 4th, I was in 3rd, Craig Esposito in 2nd, and Matthew “Machu” Cooper had a strong hold on the top spot.

Unfortunately, current, reigning champ and 9-time Midwest freestyle victor, “Farmer” John McConville, was stuck in the Southern part of the state for the day championing his high-grade, organic flora, fungi, and honey to discerning Southern Wisconsin gourmets.  It was unanimously decided (oh hindsight, you cruel mistress)  that John should be given a bye to the next round.  After all, the guy does dedicate his time, year after year, to teaching the freestyle clinic and helping us grow this sport we all love so dearly (read: ungrudgingly find ourselves addicted to).  The result: Sunday we were 6.

Semi-finals was a 1-ride death match cutting to the top 3.  Air loops and space Godzillas dominated the rides in this tricky feature. The hole doled out many flushes before feeding us her sweet grapes of retained trickery.  A few extra ends, spins, and splits carried Matthew and I️ into 2nd and 3rd respectively, and a clutch McNasty placed John comfortably in first for the final cut to top 3.  1 ride, winner takes all.

As I️ lined up to give it my all for my finals ride, I knew John was going to be tough to beat.  I️ carved out to the feature, found the sweet spot, plugged my bow for an opening loop, and WHAM! Loop to flush!  “Well that won’t cut it!”  I️  thought to myself.  “You got this. Do it again. Take your time.”   Paddle in, set up, plug, huck….BINGO!!! My loop landed so perfectly I️  immediately plugged for, and scored a space godzilla.

Now I️ was feeling good, so I️  spun my boat around, threw some quick ends and set up for the space Godzilla in the other direction.  “Ewwwww!!! Nicht sehr gut.” As my German freestyle judging cohort, Max Reinhardt, might say.  I️ shanked it pretty badly and flushed.  Not a problem. Plenty of time left.  So I️  paddled back in, took some time to set up and went for it again…..  No siree…. shanked the second one even worse then the first.  This time I️ flushed deep. However, A quick recovery above the rock ensured that I️  would get one last chance.

I️ raced up the eddy as 10-second whistle blew.  I️ knew that I️ would have to throw something big if I️ was going to have a chance of beating my bucolic adversary.  Phonix Monkey.  It was the only way.

As the clock counted down, 5, 4, 3, 2, I carved back on the feature managing to plant my cross bow stroke right before the buzzer.  My bow pulled around, I rotated my head up stream, and SPLASH! I fell over sideways failing to get the pop I needed to pull the loop through.

Matt and John both had good rides.  As the fireworks erupted, and the national anthem boomed over the downtown, I stood proudly in 2nd place next to Machu and the 2018 Midwest freestyle champion, and fellow Jackson paddler, John McConville!

For next years competition, we are considering a proposal requiring John to carry no less than half of a bushel of his fresh produce (my vote was for rotten) in his stern during his competition rides.  After his 10th win here, some sort of equalizer seems appropriate. 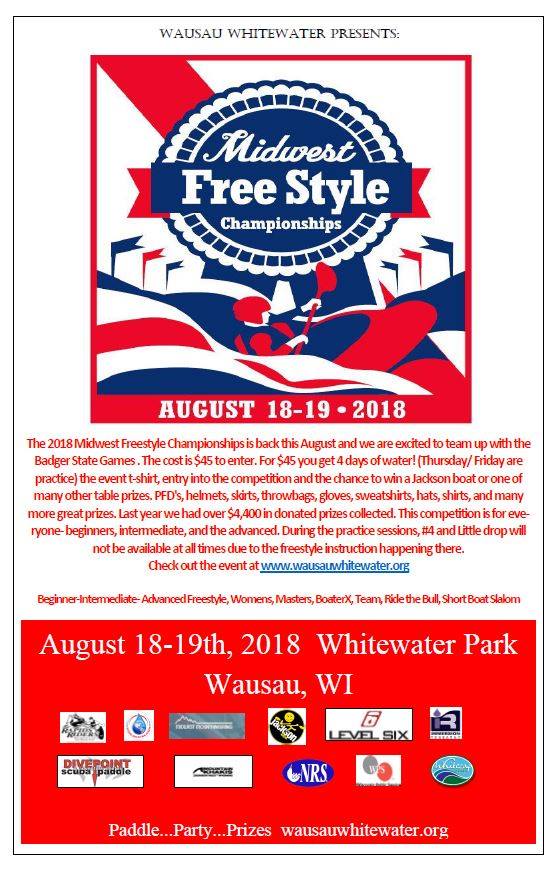 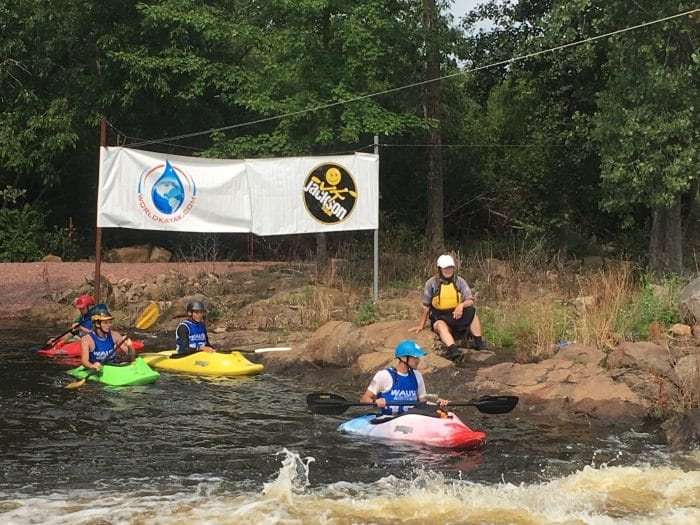 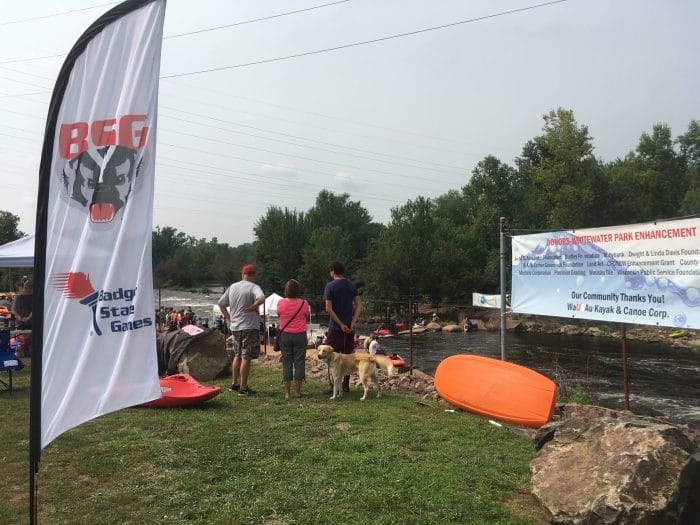 Congratulations to all the athletes for their tremendous effort and thank you Wausau Whitewater for hosting another incredible event…and congratulations (he mumbled, teeth clenched, brow furrowed) to my very good friend, hunting buddy, and paddling nemesis on his 10th year claiming the title as the MIDWEST FREESTYLE CHAMPION!!!!!  Truly an amazing feat! (I️ hope your skirt implodes next time). 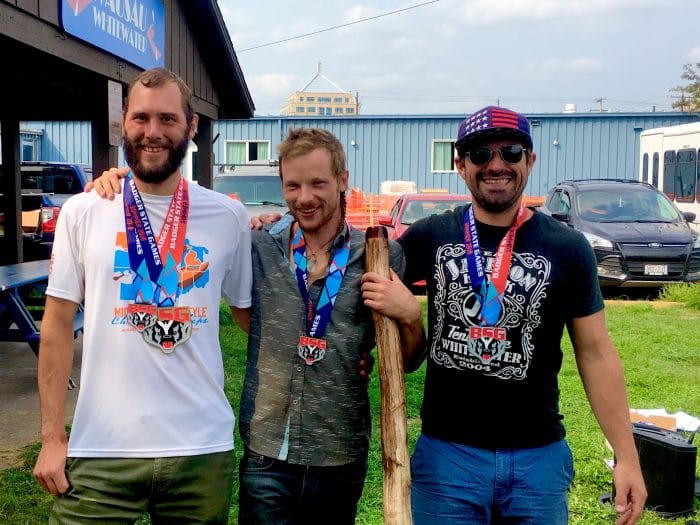 John, Matthew, and yours truly sportin’ some bling…and a didgeridoo.