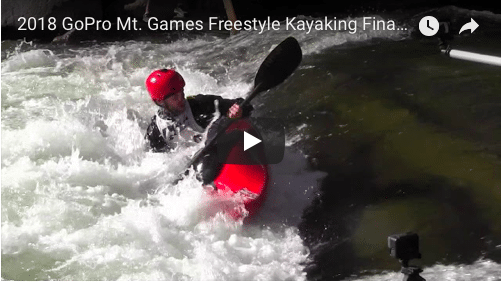 Each summer I look forward to the competing in the “Colorado Tour.” For me, this tour consists of 4 or 5 events around the state during the months of May and June. This year, for whatever reason, I executed my best rides and was rewarded with my highest finishes.

To kick off the season, I entered the Golden Games. This is only the second time I have participated in this smaller event, but I have really enjoyed it and encourage others to come check it out. On a cold and rainy Saturday morning, around 40 kayakers went up Clear Creek Canyon to race down the rapid called Screaming 1/4 Mile. The race starts with a fun ramp that puts you into a two minute sprint down the class 4 rapid. After two laps, Nick Troutman had the fasted time followed by Kenny Kellogg and Riley Frank. I just missed the podium with a combined time of 1.5 seconds slower than 2nd place finisher Kenny. After finishing the race, I went into the Golden rec center hot tub to warm up before the freestyle event.

The play spot in Golden is shallow and flushy, but offers up all hole tricks if they are done in a certain spot in a certain way. I live about 25 minutes away from this spot and my “home court” advantage allowed my to take the top spot with a score of 780. Nick Troutman finished second with a 750 and Seth Chapelle was third.

Colorado Kayak Supply (CKS) is home to the Buena Vista Pro Rodeo each year on Memorial Day weekend. I spend a lot of time kayaking in Buena Vista and the level was primo, but this is always a hard event for me. It is early in the kayaking season, so I am out of shape and out of practice. It also conflicts with my teacher schedule because it is a busy time at the end of the school year. After camping for 4 days/3 nights with our 6th grade class in Moab, I drive to BV on Friday, practice for 30 minutes, and then compete. This year, I finished 8th place in semi-finals with a high ride score of 980.

Lyons is a great town that was unfortunately devastated by a flood a few years back. The town has been slowly recovering and they installed a new play feature this year! While it was not perfect (shallow and flushy), it is a great improvement and was really fun to paddle in! I struggled to land my tricks in the hole during prelims and just barely made the cut to finals. However, I put a good second ride together in finals and scored 1015. That score held up and I had won my first event against a stacked finals. Nick Troutman finished second and congratulations to Clay Wright who finished on the podium for the first time in a while! Eric Jackson has been paddling really well this year and placed 4th. Stephen Wright dominated prelims, but hit a rock a few times in finals and finished 5th.

The GoPro Mountain Games is the biggest event of the year. Vail fills up with tens of thousands of spectators and the best athletes from around the world come to compete for glory. Clay Wright organizes the paddling events and has the responsibility of adjusting the bladders to create an optimal feature for the given water level. In this low water year, the feature was shallow and flushy in a similar fashion to Golden and Lyons. Perfect.

In prelims, for the first time ever, everything went exactly according to plan. In my second ride, I had done all of my planned routine and still had 8 seconds left on the clock for some bonus points. I was stoked to land in the first place position with a combined score of 2,200+ points. The level was lower in semi-finals and so were the rides. My high ride of 770 put me in fourth position going into the finals.

Finals at Vail is different than finals anywhere else. The terraced shoreline, upstream and downstream bridges, and 3 levels of hotel balconies create a colosseum like venue. Then, thousands of spectators fill up this colosseum. A boom camera is overhead broadcasting live to OutsideTV. Professional photographers wade into the water to get a good shot and go pros on poles are thrust out toward the action.

And it was an action packed finals. Tom Dolle from France opened with a high energy ride worth 843 points to get the crowd fired up and I answered by executing the ride I had planned. Hunter and Dane stepped it up putting them in 2nd and 1st respectively. For my second ride, I wanted to chase those guys, so I added some combos to increase my score to 1171. Nick laid down a strong ride at 1150 and then Hunter exploded with a 1668 followed by Dane’s 1586. None of us could top our 2nd ride scores, so the order remained unchanged with Hunter in 1st, followed by Dane, Me, Nick, Tom. Thank you to all of these guys for putting on a show and creating the most fun finals I have been a part of.