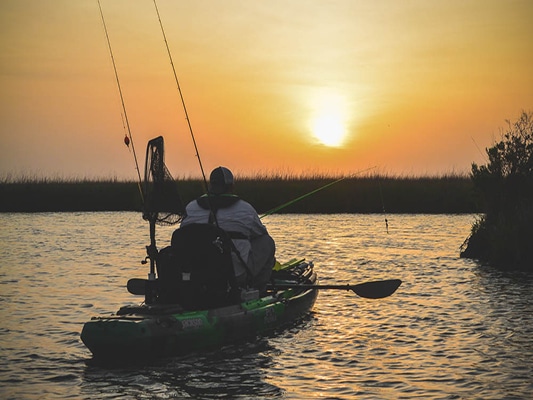 So, as I posted earlier the prior week, Karl & I were looking forward to fishing this year’s LA 1 Slamboree (put on by the Lafayette Kayak Fishing Club). And while we both got to fish it, the day did not go as planned.

We knew we’d be dealing with a rough west wind most of the day. I headed down the day before to scout out the area. I was discouraged to find that our “plan A” spot had fallen victim to the recent public/private land issues. With the site of recent installed POSTED signs, I called Karl and we talked through our options for locations. By that point, many of the guys that would be staying at the marina that night had arrived and the pre-tournament festivities began. We mostly just hung out at the water and hung out, occasionally fishing after the sun had gone down and the dock lights had attracted the bait fish. 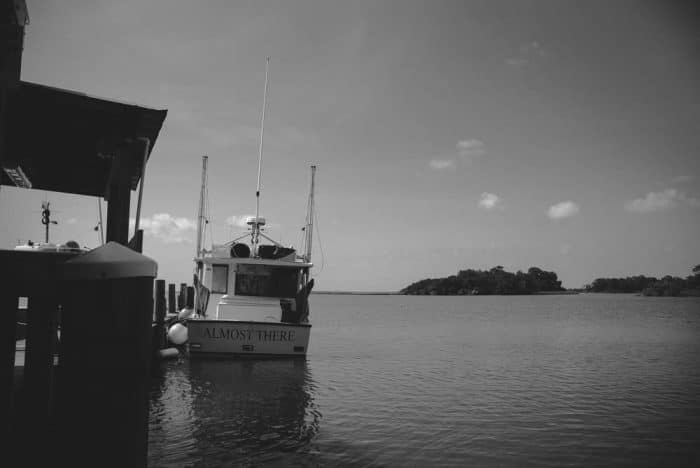 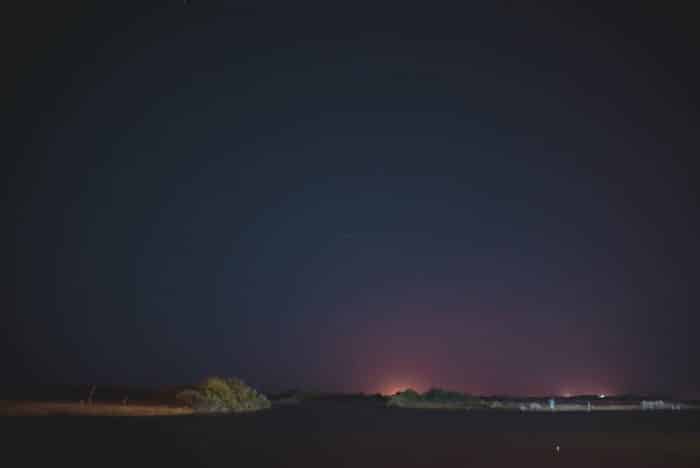 When Karl arrived the next morning, we dropped in right at the marina and headed east. There are plenty of pipeline canals in the area, so we knew we’d have a little protection from the west wind. I figured the redfish wouldn’t be much of a problem, the trout would be scarce, and the flounder would be mythical.

We spent about four hours in that area and Karl had missed a red, I had missed one and caught one, a 16.5″. Checking out a few familiar spots but without much luck. I made the decision, after needing to head back to the marina, to head northward to Bason’s. I figured that I needed to give up on the trout and flat-fish, and just try to get a nice red. 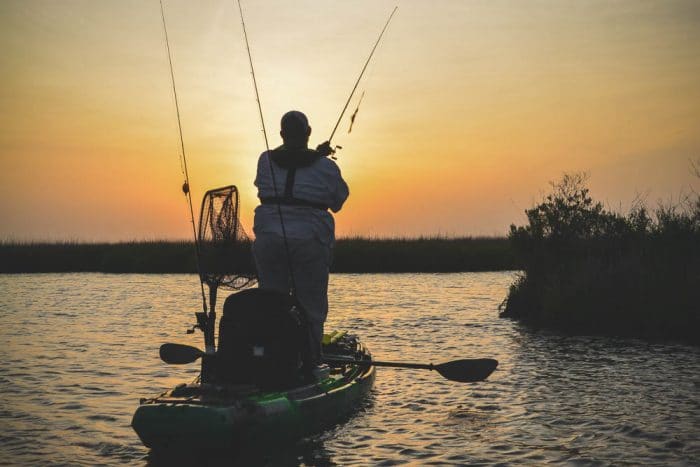 After fighting the head-wind back to the Marina, Karl decided to hang back and just enjoy being in the area; bank-fish a bit and head to the Island (Grand Isle).

I packed up and headed up to Galliano. When I got there I was greeted by several of my friends in the Redbone Fishing Club who were packing up to head south.

With seemingly no hope of a trout that far north, I headed to my redfish spot still bottom fishing slowly trying to find a mythical doormat. I arrived at my redfish spot and found….. a trout! Every bit of 12.25″ flailing at the end of my line. Into the bag it went!

However, there were no redfish. Murky water and occasionally a small red or two right along the bank. I never could get a good cast at one, and blind-casting was yielding no results either. I then decided to head into a long, straight canal heading back north while trolling a Ginger Avenger Inline Spinnerbait.

I don’t love trolling but it is an easy way to keep a line wet while being mobile. And it gave me something, because it didn’t take long before I’d nabbed another barely-legal red. Where were all the upper slots?

I neared a marsh drain while I was coming to terms with weighing in two barely-legal fish. I looked up into the drain-out… a tail. I stood up to get a good look at the fish and could tell he’d be as good as it would get. He spooked on the first cast – I brought the bait to him too fast. He made a u-turn then stopped. Up went the tail, and then a second tail. This was too good, I just needed the presentation to be subtle. The Bugg hit the water about three feet on the other side of them from me, and I reeled it in closer… slowed down… popped it…

After a short fight, I netted and bagged the 25.5″ red and figured I needed to head back, get loaded up, and get to the marina. 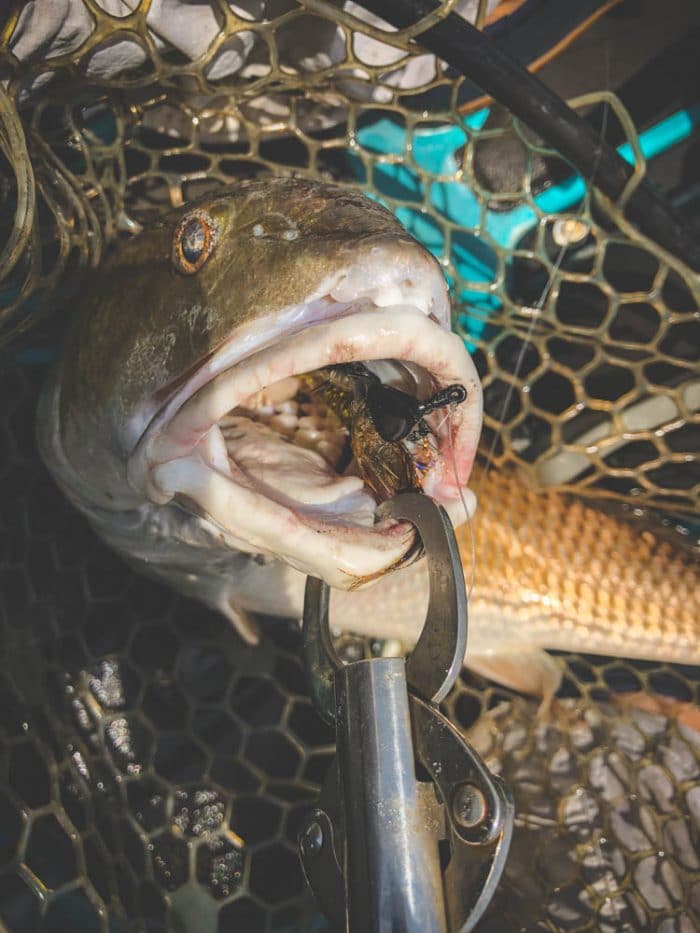 This tournament, this year, counted as a true-slam tournament – if an angler caught all three species (redfish, trout, founder) they would place higher (regardless of weight) than someone with two fish. I had spoken to Scott during my change of location and learned that he had gotten his trout and a flounder. He arrived at Bason’s shortly after me and grabbed his red. A few other guys had similar luck.

I still haven’t finished in the money, but this is the closest I’ve gotten with this tournament. There were 5 spots paid-out overall and 5 slams caught so all who caught all three fish got a check. I ended up 13th overall. Not really great, but out of 61 registered and 40 that weighed in, I’ll take it.

Big fish categories paid-out the top two spots. My redfish with the 5th heaviest overall, but granted it was tough conditions and the typical tournament bruisers were missing. 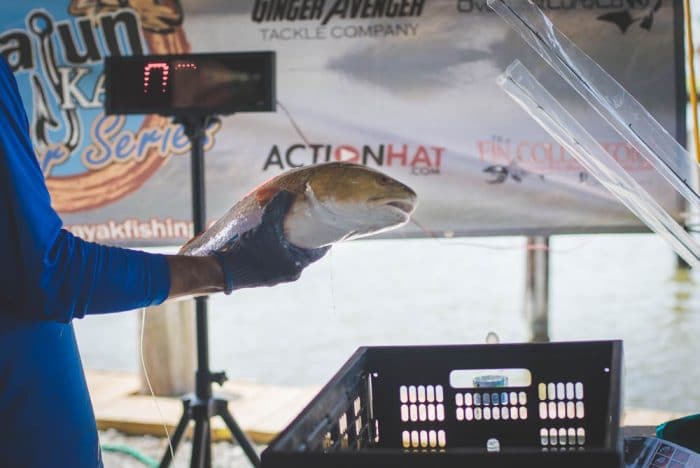 This tournament really got me fired up and I’m looking forward to the next event. Not sure when that will be, but I’m ready!