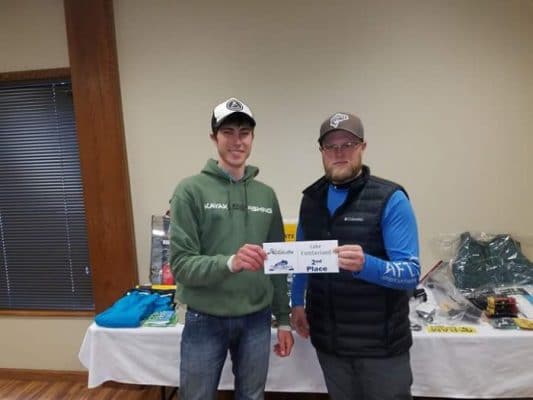 We pulled up to the pre tournament meeting at 5:00am. Exactly thirteen hours since we had departed from Titusville Florida. I have to admit, stepping out of the truck Into the freezing air of southern Kentucky wasn’t the greatest. Especially since the day before we had been enjoying the tropical weather of Florida. Nonetheless I was beyond excited to try my luck at a world class smallmouth fishery and against some seriously stiff competition. The check-in went smoothly and off we went; fifty two anglers set out to brave the weather and chase some trophy fish. 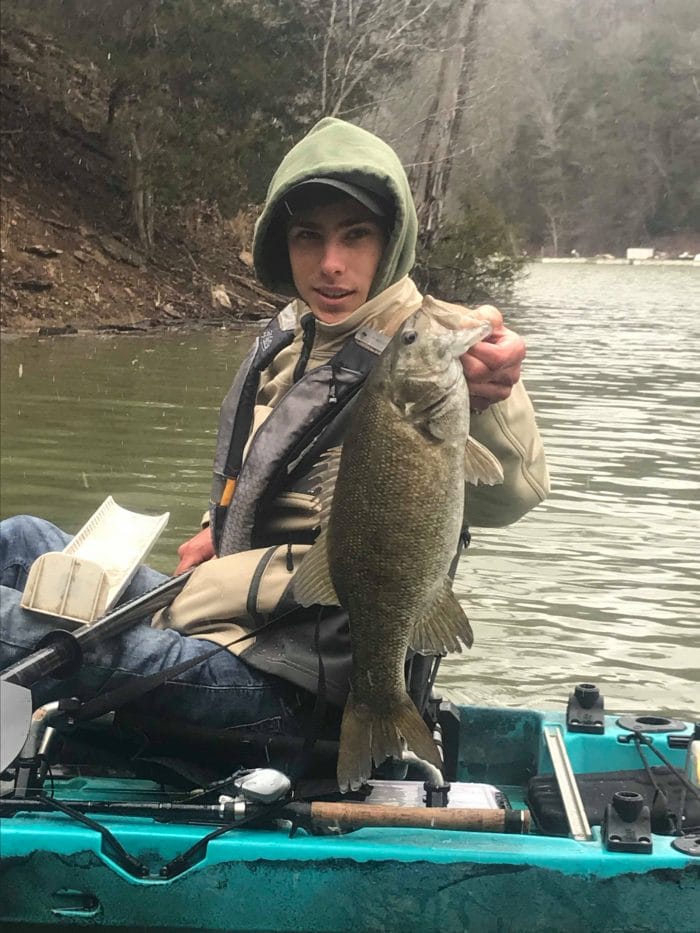 The whole lake was fair game. Even with over a hundred square miles of lake available to fish we opted to drive three minutes to the nearest marina and get to work. Unloading the Cuda HD was a blur. The excitement of what the day could hold moved me quickly despite the still freezing temperatures. Rods, net, then the seat and power pole. Everything found its place on the kayak as I mindlessly raced between the ramp and the truck. The kayaks hit the water with only minutes to spare and we were off. 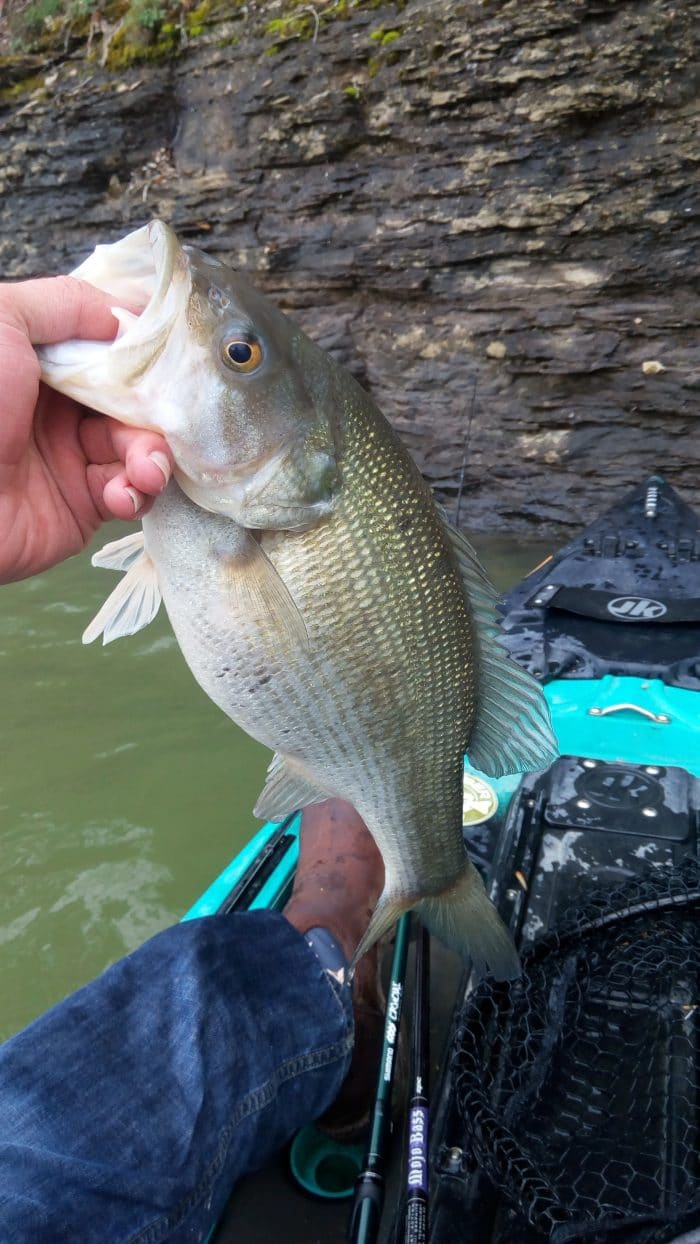 I believe that I was wearing every pair of pants that I had brought with me yet that cold air seemed to cut straight through. I figured the fish couldn’t be much warmer so I reached around and pulled out the good ole Ned Rig. I made a few quick casts at the bank as we drifted away from the ramp. The lake was somewhat flooded so there was debris drifting about and the water was slightly stained. As I sat there observing the water, I heard the unmistakable sound of a spinning reels drag. I look up and of course my buddy James was hooked up over the side of his Kilroy. He boated the first fish of the day. A Lake Cumberland smallmouth coming in at around twelve inches. After watching James CPR that fish and a little bit of friendly trash talk we resumed fishing. Not ten minutes later I boat flipped my first lake Cumberland Smallmouth. I sat there and admired it in all of its nine inches of glory. I scored the fish and tossed it back. I figured everyone has to start somewhere and at least the skunk was out of the boat. 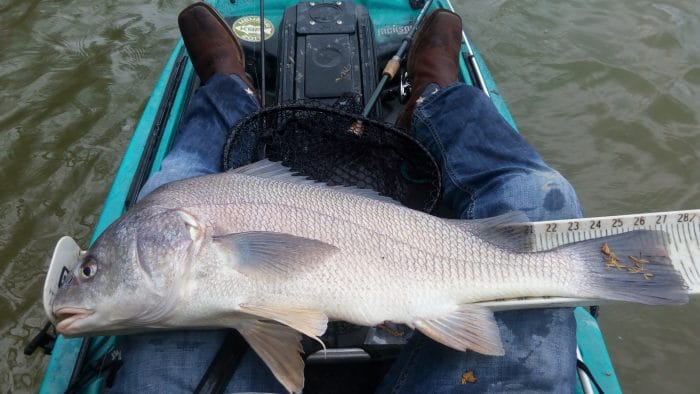 From there my day became somewhat of a grind. I went without a bite for a few hours. In that time James had managed another reasonable fish but I was struggling. We weren’t doing anything fancy; we just fished down the shoreline hoping for a bite. It wasn’t until 9am that my spell of no bites was broken. I was fishing down another debris filled shoreline when the light tap followed by the scream of my drag caused me to jump to attention. I played the fish knowing it wasn’t another nine incher. After a few hard runs she hit the net. A solid nineteen and half inch Cumberland smallmouth. I scored the fish, took a few quick pictures and then sent her off. At that point in the day I had two fish out of a three fish limit. The funny thing was that my first fish was small enough to be a meal for my second. I knew I had one good fish and that I needed two more like it to stand a chance so I set off. That fish gave me a second wind and almost made me forget about my feet which were almost numb. 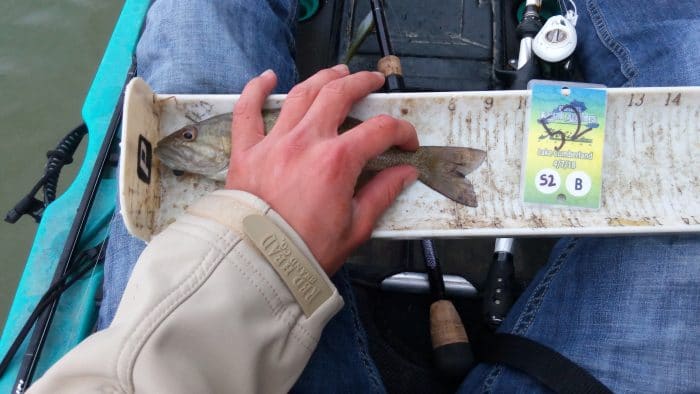 Twenty minutes later I had my limit. I boated my third smallmouth which came in at seventeen and three quarters. From there the grind resumed. I paddled the lake hunting for something to cull my nine inch fish which had been penalized down to about seven inches. After about an hour I boated a thirteen inch fish  immediately followed by a fifteen. As I scored the fish I took a look at the standings and found out that my fellow Jackson Team Member Brandon Sorg was leading the tournament! He was sitting with a solid fifty five inch limit. I did some math to find out that I needed about a nineteen inch fish to pass him. With some more motivation I set out. After about an hour of no bites I was beginning to doubt I could catch Brandon. Not two seconds later my rod was almost ripped out of my hand by a monster fish. I was beyond excited until I realized what I had was no bass. It turned out to be a monster drum. Disappointed I retrieved my lure and made another cast into the same spot. To my surprise I got an almost identical bite. This time it was something that would actually help the cause: a spotted bass just shy of seventeen inches. Brandon still held the lead but that fish moved me from sixth to second! 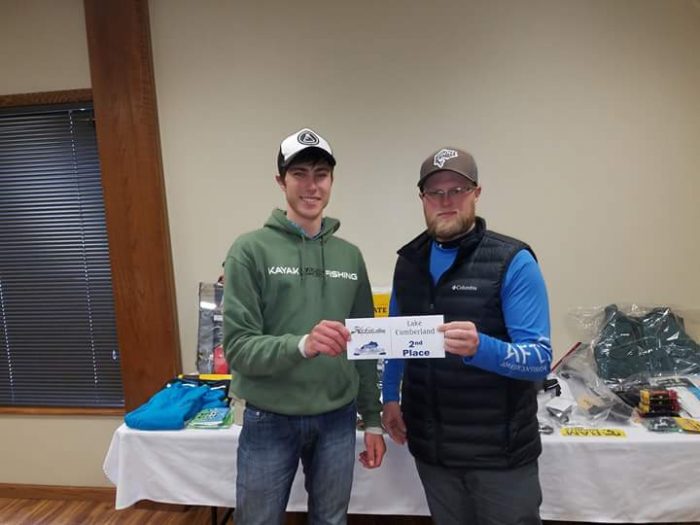 Overall I had a blast fishing with the Bluegrass Kayak Anglers. It was a great time being able to meet everyone and enjoy some time on such an awesome lake! It’s always a good day when the Jackson team can take first and second.