Tips for if (when?) your kid becomes a better kayaker than you… 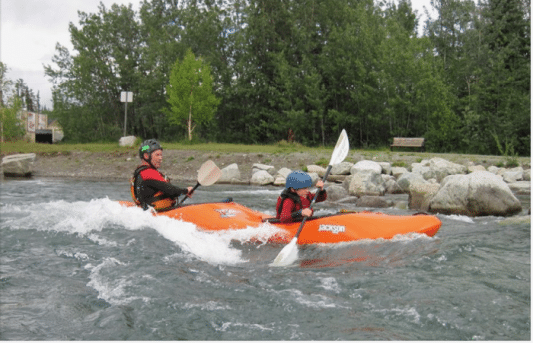 Progression in kayaking is an amazing, terrifying and rewarding activity. It’s HARD and yet oh so worth it…

Last fall there was a role swap in our family. I went from 2nd best, and the one looking out for the kid, to comfortably in 3rd place with the 14 year old kid now looking out for me. 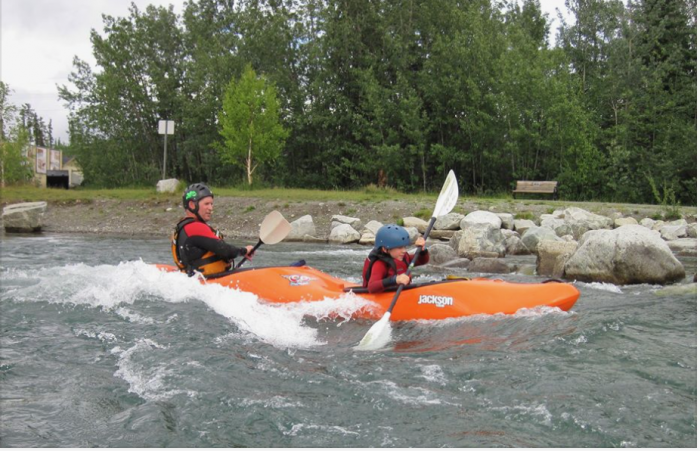 I realized this in the late fall when we were paddling a new river and all of a sudden I was the one sandwiched in the middle rather than at the back or the front.
How did we get here was the question running through my mind at that point.
If we rewind 5 years, I had been back into kayaking for a year or two and we were teaching Hunter how to kayak. He was picking things up pretty quickly and, thanks to some creative teaching by Tim, was starting to front surf waves confidently. Watching him I realized that I was not progressing at the same pace and that if I didn’t do anything different I was going to get surpassed by my 10 year old. I was ok with getting surpassed at some point, but not that early on in the game. I picked up my socks and sent myself off to immersion kayak camp at Endless Adventures in Crescent Valley, BC where the weather and the water are warm (cold Yukon water was definitely a barrier for me). It was great to spend a week focused solely on myself and pushing my comfort zone, both mentally and physically. 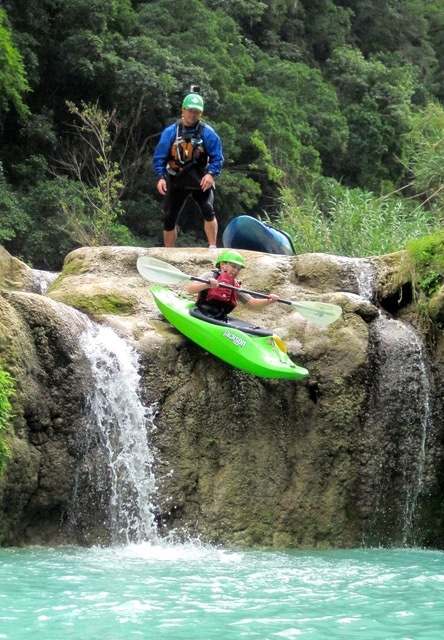 That was a great jump start for the following year and then two years ago I took another step and attended EJ Week at Wilderness Tours on the Ottawa River. Another warm weather/water destination and the features definitely felt like a HUGE step up for me, especially in my first playboat. I had fabulous moments and sucky moments, with plenty of time spent swimming, but I walked away with a step function increase in my own mental confidence. I went home to our local hole and it looked so small and manageable in comparison. For the first time ever, I threw myself into the hole and was learning to loop by the end of the summer.
Last year we were on the road paddling from mid April through the end of November. We covered a number of new rivers and some old favourites as well. Through all of that, I’ve learned a few tips for progression that I wanted to share:
1) If at all possible, have a home river that you can use for your progression benchmark. It is great to have a place where you are highly comfortable to measure your improvement against. Is that ferry easier than it was a month ago now that you’ve challenged yourself on some other rivers? Can you run the harder sneak and feel in control the whole time after having consistently run the easier line? What one thing can you do on this run that is different from your normal runs? 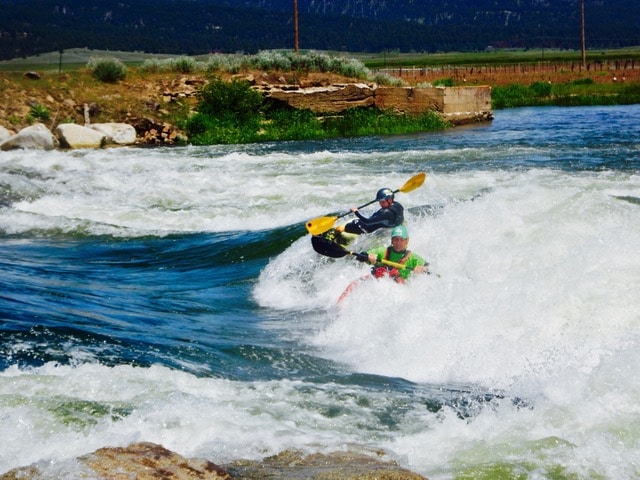 2) Find people that you trust to paddle with that will support your efforts to stretch yourself. Will they take the easier lines down a new river section for you to expand your experiences? Will they teach you how to boof that one tricky feature on your home river? They can be your biggest cheerleader and you need that when you are pushing yourself. Progression means growing, and growing often means feeling uncomfortable, which leads to a whole lot of adrenaline running through your system, which can be exhausting and overwhelming. Hence the very valuable external support.
3) Take your time and move at your own pace. Progress doesn’t have to be linear. We have been to Kelly’s Whitewater Park in Cascade Idaho 3 times now. The first time I didn’t go in the top hole at all. Looked at it and said “no thank you”. The second time I went in it, got worked and again said “no thank you” for a repeat adventure. Our third trip was in late June of last year. The weather was warm and I decided that I was going to push myself. My goal was to be comfortably surfing in it by the end of our visit, which was 10 days long. I spent the first five days in “get to know you” mode. The most logical approach to the wave was through a big foamy hole and it terrified me so I practiced dropping in from up top, from entering on the far side and from by just paddling into the back of the foamy hole but not actually going into the trough. Five days in and I was starting to get the feel for the foamy stuff so started dropping into the hole and just side surfing. Days 6-9 were works in progress with some big high 5’s and a few topsy turvy beatings that had me call it a day. Day ten and I closed off my visit with entering through the hole side, front surfing the wave under control, got a spin and back surf and even had an unintended wave loop. 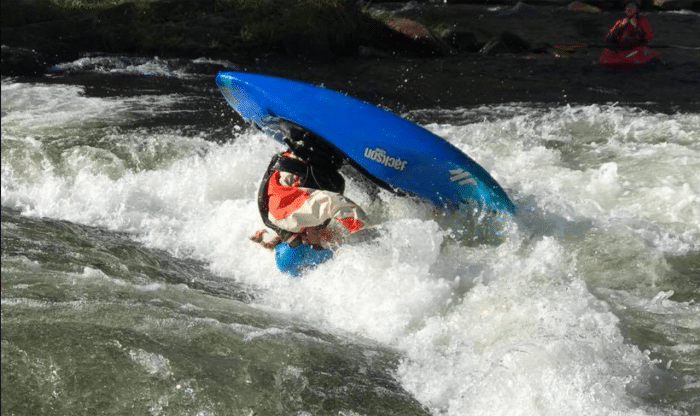 4) Work on the mental side of things as much as the technical and physical. Why is my 14 year old progressing faster than me? He’s more willing to throw himself into a feature and work it out than I am. Case in point is he was surfing the top feature at Kelly’s on our first trip. It was his first time surfing in a hole that big and he got stuck in a side surf, had that terrified look and feeling of fear about how am I going to get out, got worked and swam. But got back in again and carried on. Many of us adults have stronger recall of that uncomfortable feeling and don’t jump up and down to replicate it. Anna Lesveque wrote a great article on paddling resilience that is worth a read for additional tips in this area (https://mindbodypaddle.com/8287/build-emotional-resilience-water/).
5) A day on the water is better than not going out on the water. If you aren’t feeling it or the run your friends are running is just too daunting, take a look for a way to still get out and do something on the water. Can you drive shuttle and then put in from the take out and paddle up to meet them on an easier section of whitewater? Can you find a place where you can go back to basics and spend time finding the joy in jet ferries or zen like front surfing? 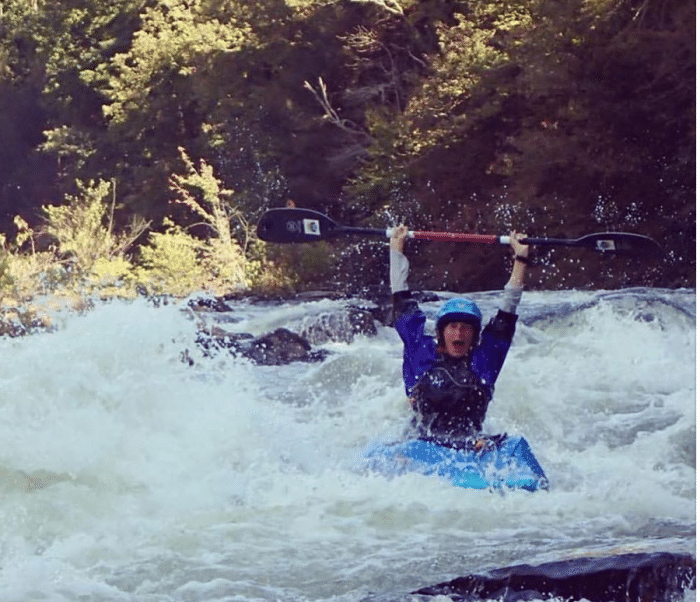 Bonus: embrace the swim. It happens to everyone for one reason or another. Don’t beat yourself up. Shake your head, self-rescue, smile and then get back out there!
Lee (Kayak Mom who’s not willing to give in yet…)