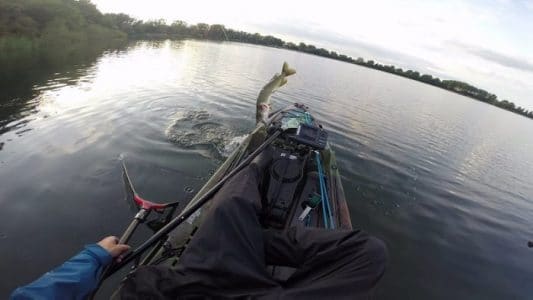 One of my last kajak adventures in 2017 on the Zevenhuizer lake was end oktober.
As the temperatures drop slowly, nature starts to prepare for the winter season.
Armed with an my LTS flyrod and Jackson Kayak Coosa HD I hit the water in the beginning of the evening.
I know that in a couple of hours when daylight starts fading away, the pike start gathering around the more shallow part of the lake as that is where the baitfish are. 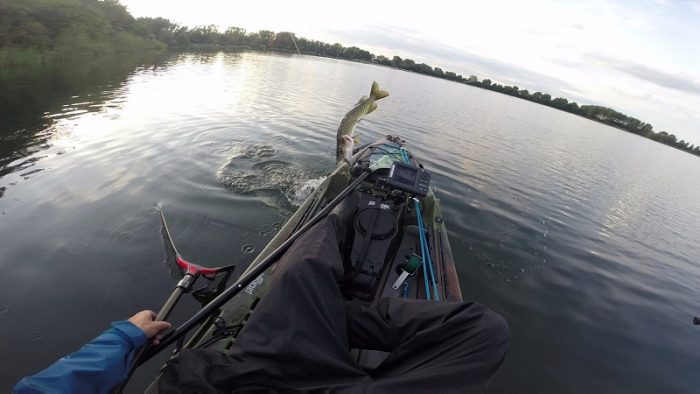 Did some recon in the first half hour to see if there is activity on the fishfinder. And that is a funny thing about the Zevenhuizer lake. I had numerous sessions on this water where I was trying to spot and catch fish but it seemed that they were completely gone. No action, no fish, nothing to find on the sonar.
This time,….. action !! Everywhere along the part where the lake starts to get deeper you could see schools with fish,……and under these schools,…….you see “bananas” ! And that is what we want to see,….BANANAS !!! 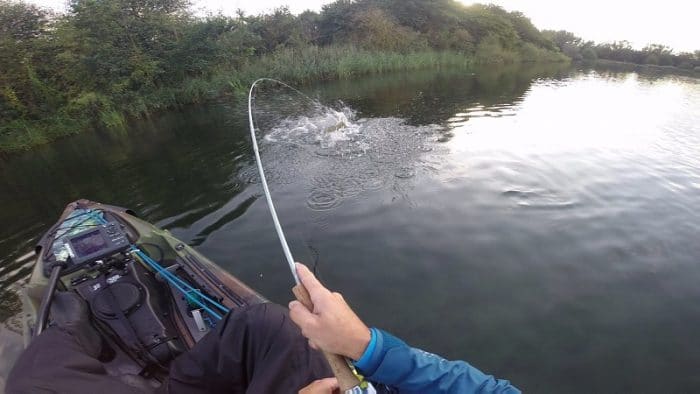 Paddled back to the more shallow part of the lake and let’s start fishing.
My weapon of choice for tonight is an LTS Zalt flyrod, #8 with a floating line and a T8 sink tip to get the tube fly down easily and fast.
First casts are towards the banks. There are some left overs of the weeds of this summer and maybe there is somebody hiding itself underneath. No fush !
There is light south easterly breeze over the lake and it slowly moves me to the deeper part of the lake where the drop off starts. 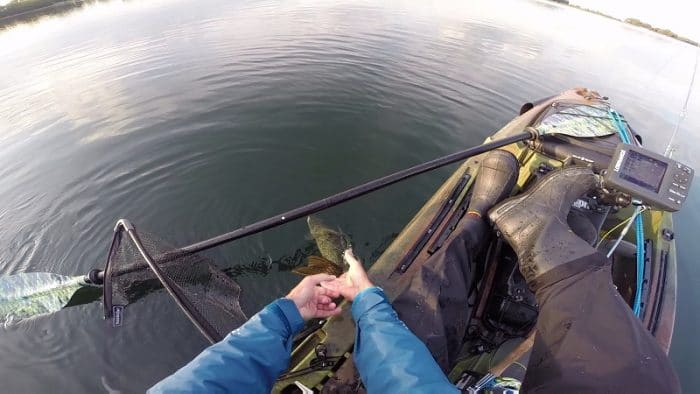 Bang !! Pike on the fly !! I put myself in the nice seat of the JK Coosa and the fight starts.
I can feel it is not a real big Mama. But fish is fish !! As I reel the fish in I spot it a few times when it comes to the surface. Around 70 cms approx. But it fights like hell !! The fish in this lake are so healthy. Each and everytime I have the pleasure to get one on board you can see the fish are full of energy and they show healthy colours. That is great to see when you live in an area with more than enough urban activity.
When I try to net the fish the first time it did not cooperate. In fact,….this pike was so happy that I was floating in a Jackson Kayak that it decided to make an attempt to get onboard.
Again I am so happy that I always fish with barbless hooks. Unhooking a pike gets so easy in this way.
OK, I lost one too later that night but I take that for granted.
That was one nice last session for 2017 !!