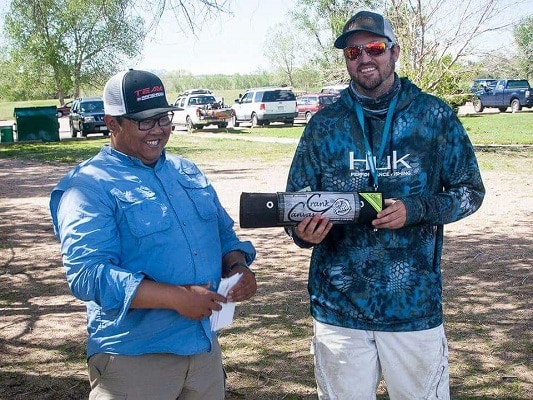 With the first kayak tournament under my belt, it was time to see if Boyd Lake was a fluke or if I could keep the momentum going at a lake I’ve never been to before: Chatfield Reservoir.

Chatfield, unlike Boyd, was more of a drive for me. Whereas Boyd was about 3 miles away, Chatfield is about an hour and fifteen minute drive. This meant I was going to be more limited in my pre-fishing opportunities. Fortunately, I was able to learn a lot about Chatfield from my computer. There is a ton of information out there on Chatfield and I was able to watch YouTube videos, listen to past episodes of Terry Wickstrom Outdoors, and see multiple Facebook posts to help me get an idea of how I was going to fish the reservoir.

My first trip to Chatfield was a frustrating one. The wind had picked up early on in the day and I was struggling putting a pattern together. I saw other anglers around me catching some nice smallmouth on what looked to be a dropshot, but that is not a strength of mine. I threw a few different things that day but didn’t catch a single fish over 13 inches. I believed I was in the right spot after seeing nicer smallmouth caught in the area, and I was determined to figure out how to make them bite. I didn’t stay very long that day, and would only have one more opportunity to fish before tournament day.

The second trip to Chatfield was a slight improvement over the first one. I went back to the same spot and although my numbers increased, the quality did not. Smallmouth started busting shad on the surface so I could have taken advantage of that bite, but since I am already very comfortable fishing top water, I wanted to find other patterns to utilize come tournament day and ignored that bite. I thought I picked up a clue when hooking into a larger fish but it turned out to be a walleye. I never thought I’d be disappointed in catching a nice walleye but I was a bit disappointed with that one. I packed it up and still didn’t feel like I had a tournament winning strategy, but with the tournament 3 days away I was all out of time to pre-fish.

Tournament day came and I had lures tied on that I hadn’t used much, if at all, during pre-fishing. I started the day off attempting to pick off a few bass on a popper. After only getting one small blow up, I quickly abandoned top water as the conditions weren’t quite right for it. I moved on to throwing a senko on a dropshot using a tube as the weight. This way I felt like I could try 2 lures at once to see if either would clue me in on what to do. I finally caught a break and a decent smallmouth that bit the tube. I continued fishing the senko/tube dropshot and picked off another nice smallmouth on the tube. I ditched the senko part of the rig and went to work throwing just the tube. I caught a couple more nice smallmouth with the biggest one being 17.75 inches. I had caught a limit of 4 decent smallmouth with one dink at 11.25 inches. I had my opportunities to improve my limit, but I had 2 nice smallmouth come off at the kayak. I was kicking myself because if I had tried netting those fish instead of playing them out there is a good chance I would have landed them. Once again, this just helped me improve as an angler and taught me a lesson in how I would fish tournaments in the future.

I never was able to cull out the 11.25 inch dink and turned in a total of 73.5 inches. The tournament was won by CKFC board member Ronald Southworth who had a 5 fish limit of 78.5 inches. My 73.5 inch limit, however, was enough to get me a 4th place finish and keep me in the top five in Angler of the Year (AOY) points. Just like that, we were halfway through the season with two tournaments remaining: Pueblo and Horsetooth Reservoir. Because of my schedule, I would only be able to fish the Horsetooth event, meaning that Pueblo was going to be my dropped tournament. Fortunately, anglers drop their lowest scoring tournament when calculating the AOY results meaning I would still be in the hunt to finish at the top. This just meant I would need a strong finish at Horsetooth!