Why Argentina Worlds Were the Best Ever!

These Freestyle Kayaking World Championships in San Juan, Argentina were particularly special for me. First, after Garburator Worlds, I honestly said to myself that I was not going to Argentina – it seemed far away and impossible to imagine going!! Second, I was not sure that I had a real chance of making the team. Third, I could not imagine going without a good support network. What may not seem apparent when considering what it takes to do your best at the World Championships and have the most fun is having a good support crew off the water. This is key. For the Argentina Worlds, I was not sure any friends or family would be willing to come all that way to Argentina, and I knew I really could not and did not want to make the enormous effort to go to the Worlds without them. 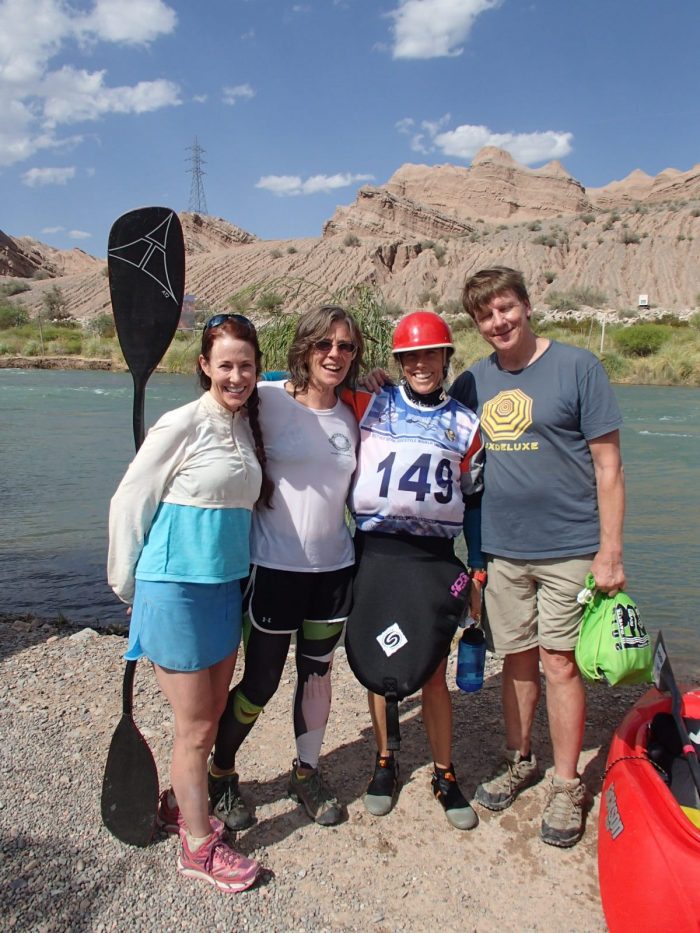 After I made the team, I took steps right away to see who might be able to come. Since there was nearly 6 months between team trials and the Worlds, I knew that giving people enough lead time would make it more of a likely possibility. Learning from past experience, I worked hard not to over program my time up until Worlds. Finally, based on how I had felt at all other Worlds during the actual competition, I planned my training for my best preparation specifically trying not to over train – this included not making an extra trip to Uganda before going to Argentina. My last Worlds at Garb had me completely exhausted and let down after it was all over. I reflected on that experience a lot and figured out how to make this experience the best Worlds yet. As soon as I made the team this time, I started working on who might be willing to come all the way to Argentina for Worlds! After a little discussion with my friends and family, I had some excited nibbles for those who wanted to go – namely my main support crew in Colorado: Rachel Wiese, and Dave and Paula Saaf.
The day after team trials in Colorado, Emily and Kristine had sussed out the best place for all of us to stay in Argentina – Del Bono Beach Complejo Bahia- a mere 2 kilometers from the hole! Though I did not really pay attention to what the accommodation looked like, I liked the sound of it and its proximity to the feature. I wasted no time in booking a cabana and renting a car. And I was so thankful that there was plenty of time after team trials until Worlds to train. As it turns out, the Northeast would be slammed by a drought for the second year in a row and my local awesome play hole at Tarrifville Gorge in Connecticut would be way too low for any real hole training. In the end, this would be very surprisingly beneficial because I learned about a new amazing tidal surfing spot on the Maine coast called Sullivan Falls. That was a huge blessing as it was a really fun, beautiful and reliable spot that you could count on running twice a day. 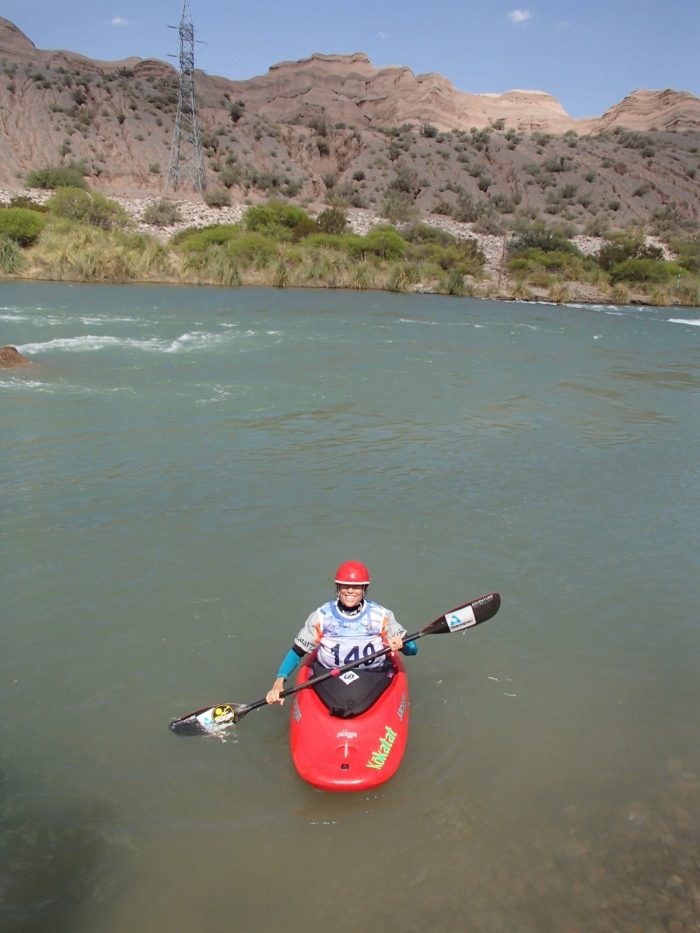 In addition to my paddling at Sullivan Falls, I did a lot of hiking and flat water training – even some SUPing too! I felt super fit and ready for any hole training that might come my way. In the end, one of the best decisions and training opportunities I had turned out to be coming early to Argentina. After an epic journey with my friend Karen, kayak, paddles, and poor Spanish skills, I made it to Argentina on November 1st. I was wiped out from the journey but happy to have made it. Emily, Nick, Tucker and Parker were there to greet us as we arrived and training started the very next day! I had expected many paddlers to be there already but they were not! Our training sessions were high energy and included many rides and no line!
Though I kept expecting many people to show up, ithey did not until the last week of training! I felt extremely lucky because I had had the privilege of getting to do a lot of paddling in the amazing Worlds hole before things got too busy. It was 100% like going to kayak camp for several weeks, and I definitely got to work on a number of new tricks I could not do – even if they did not make it into my routine, they were really fun. All the early arrival paddlers I watched really impressed me, and I knew that at this Worlds the Women’s and Men’s paddling levels would be very high. I was even more impressed when I watched the juniors – especially the junior women. Somehow, 8 years ago if you could do a spin, you were on the US Team as a junior woman. Today, that was far from the case. This year, junior women, had all their loops moves and were working on McNasty’s! Then, one day, I saw Ottie Robinson-Shaw and her dad Will. Ottie threw the biggest clean aerial loop I had ever seen by a girl – it was extraordinary and inspiring! 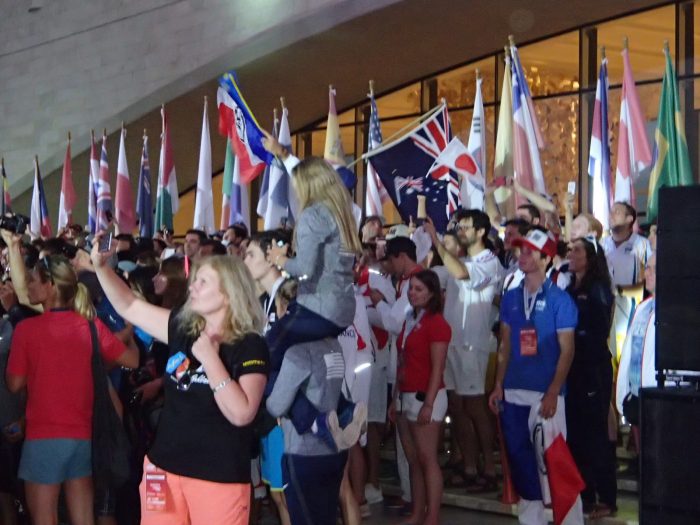 By the time we got to team practice, I was feeling prepared but not hitting my rides on the first two rides we got in each practice session. I was rushing and knew it, so decided to stop focusing on the time limit of 45 seconds and trying to squeeze everything in to that time period. That helped a lot. I relaxed and started to have much more fun! I also got a terrific opportunity to see how great the rest of our team was paddling – I felt inspired. Everyone looked strong and ready for the competition. The next piece that fell into place for me was that my really good friends and paddling buddies came to Argentina! As soon as I picked them up at the airport on the Friday before Worlds began, I relaxed. Just knowing they were there and would support me and cheer me on, no matter what happened, made me feel a deep sense of comfort. The last piece to come together was arrival of Juerg. Though I had told him, it was ok not to come down to Argentina, he had agreed to come just for the competition. I was very happy to hear this but trying not to count on it – just in case it did not work out.
Finally, the Worlds started with an amazing opening ceremony on November 26th. Even though it was near 100F that day, San Juan put on the most marvelous opening ceremonies for all of us! Wearing our long sleeve track suit team uniform was hard to imagine in the heat, but in the end, everyone was so caught up in the moment that it did not matter! The opening ceremony included an amazing Tango dancing display, music, and fireworks. The atmosphere was electric with excitement and everyone was ready for Worlds to start. After a delicious late night dinner at Antares brew pub, home of the best taco I have eaten, we went home to bed. Thank goodness I had a few days off and I could rest up before paddling – what a blessing. Monday we woke to a real live sandstorm – it was impossible to see the mountains across the lake and in contrast to the hot still 100F day of opening ceremonies, Monday was cold and windy! The day warmed up and the wind calmed as time went on. 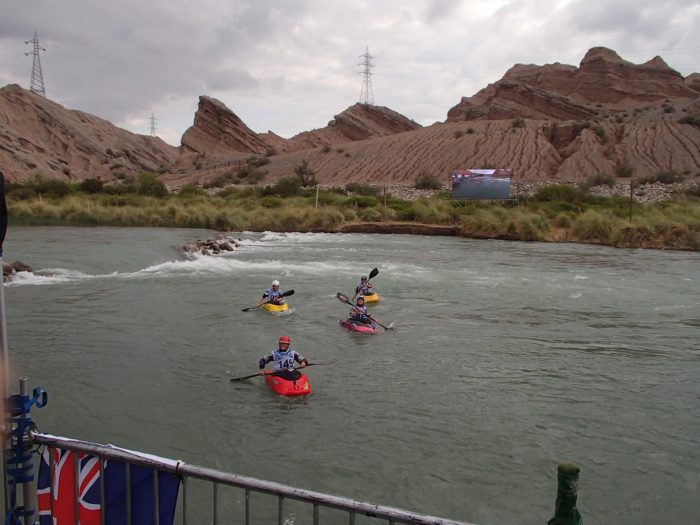 By dusk, it was the men’s squirt boating final. Clay was back in his element and put on quite a show for all. The youngsters definitely could not keep up with him and it was thrilling to see him paddle so well. As well, it was wonderful to see Anna Bruno climb up the lady’s squirt ladder through the final round. She finished in 3rd and was super happy. Her parents even arrived in time to watch her paddle which was quite awesome too.
The rest of week went into overdrive after that. Though there were quiet moments, overall, the time flew by! Before I knew it, it was time for my heat. I was ready – excited, nervous but also ready. When I dropped into the eddy and looked at everyone in the stands and felt the positive energy from the crowd, I almost burst into tears, overwhelmed with emotion! My first ride was one of the best if not the best ride I have ever done in competition – it felt effortless and one trick flowed into the next. I was so happy – even if nothing else happened – I was thrilled I had been able to pull it all together to do that. Of course, it was extra sweet to finish in the top 20 so I could paddle the next day. And I was super happy to paddle Quarterfinals because you get three rides and two of them count. It was a super thrill – all of it! And my overpowering feeling when it was over was that I could not wait to paddle more and keep learning new stuff. My body was feeling good and I was not over tired – even though I was pretty darn exhausted – I felt elated.
An overwhelming feeling I had and carry from these worlds is gratitude – just feeling so lucky to get to compete at that level and be a part of something so beautiful. Each one of us competitors is out there trying our hardest to do the best we can and demonstrate what we are capable of. There are so few pure examples of that in life – especially as life goes on and gets complicated by injury, responsibilities, and “the shoulds” that pull you away from your passions. When we do get that opportunity to really do what we love, it’s an awesome moment to savor and share. These worlds will stay with me for a long time for all those reasons!