Its not over until its over!

There is a lot that goes through my routine when I prep for an upcoming tournament. I always study a lot of contour maps and satellite images. I also will go over past tournaments and fishing outings in the area where the future tournament will be. Time of year and weather has to be taken in consideration when going over past notes. If the conditions aren’t right, its hard not to fish the history, yet the fish could be long gone from that area, but its usually worth a cast or 2 throughout the day, especially if you are in the area. 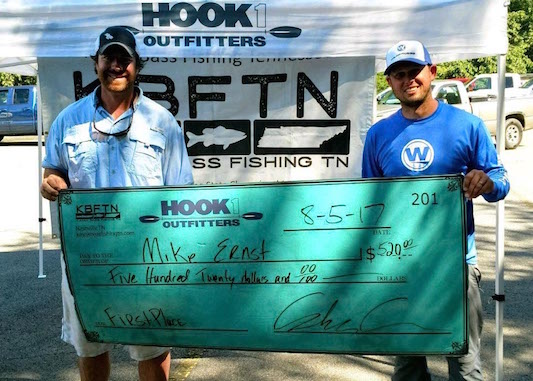 The KBFTN season closer was on J. Percy Priest Lake in Nashville, TN. It was an open launch, which means we could use any public launch on the entire reservoir. I had prefished 2 different areas and hadn’t had much luck. One pattern that is pretty consistent on reservoirs around here is as the water warms up over summer, the bridges attract a lot of bait in their shade, which eventually brings in the bass. Usually this bite gets better as the sun gets higher and hotter. And bridges just tend to hold fish most of the time anyways.

Because I had no luck prefishing, I decided last minute to head to an area that has one of these bridges. I hadn’t fished this area yet this year, but knew that if it got hot enough and the sun was shining, that there should be some fish that would show up under that bridge. Since the tourney started at sunup, I hit a shallow mud flat right at daylight. I managed 2 keepers and 2 shorts on a spook in the first 15 minutes. Then the sun came over the trees and the bait and fish left. I continued to a steep bank with some deep water close by. I wasted an hour fishing this bank without a bite. I headed to the bridge. It was about 8:30 AM. There wasn’t any bait on the surface, nor was I marking any on my electronics. I fished it for a few casts without any luck. I paddled out to a few brush piles that I knew of and flipped a jig in them. No luck. I then picked a shady bank, as the sun was getting a little hotter. I hit that bank back towards the bridge with a buzzbait on the shade line and in the laydowns. Nothing. The second time I came up to the bridge it was 11:00. I made a few casts at the first pilling and had no luck, as I paddled to the second one, I started noticing some bait flickering and I was marking several clouds of bait along the shade line. I casted a fluke at the second piling and instantly had a bite and caught a short. The next cast I missed a good bite. I stuck around a little longer and I had no other bites. 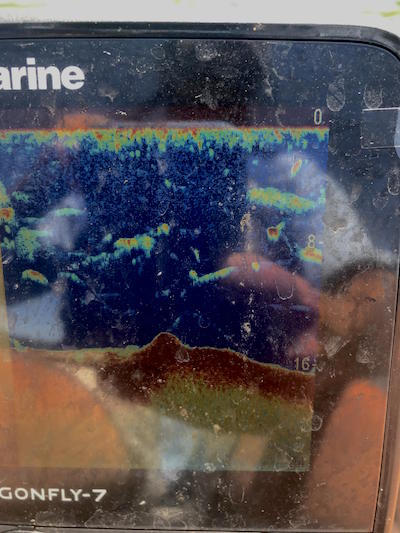 I continued on to another few brush piles that I knew about without any luck. I gave the bridge about an hour rest as I hit a few other areas. At noon I pulled back up to the bridge. I missed a good bite on the fluke on the 2nd cast, but the next 15 minutes were without action. I tossed out my Strike King 6xd in Citrus Shad color and on the second cast I caught a 17.5”. I measured it, took the picture and released it. The very next cast I caught a 14” on the exact same retrieve. There was a boulder down there that if my crank bait deflected off it, I got a bite. I caught 6 more off that boulder in the next 45 minutes and took the lead by over 5”. I never once marked a big fish on my graph in that area. But I did mark lots of bait. With the combination of the shade from the bridge, the bait and the fact it was along a river channel, it was a recipe that had to hold bass. It took me 3 times checking that spot to catch good fish. Just because you fish an area that doesn’t have fish on it early on in a tournament doesn’t mean that there is nothing there or it doesn’t mean nothing will show up.

So next time if everything adds up or you know of a hot spot, give it a few tries during a tourney if the first time or 2 don’t pan out. It could pay off!