For the first time of my life, I went all the way up to Canada for what we called “Stakeout” as a kayaker. Stakeout is the ice melt in Quebec and Ontario at the beggining of the spring so after a long and freezing winter. So when the ice melt in May, the river is 10X times higher than in summer time and creates enormous waves, holes and waterfalls.
Stakeout is one of the stoutest thing you can do as a kayaker. I’ve been dreaming about that since I started kayaking, every experienced paddler needs to do this, everything is so much bigger compared to low CFS in Europe.
A couple days after my Math exams in early May, packed up,  Mom and I headed up to St Stanislas. 25hours, (yeah It’s long but It’s WORTH it) We finally made it !!! The Boys finished there last event of « Unleashed” the day before I arrived, unfortunately I missed this event because of my Math test.
My first day kayaking was the Mistassibi river, a 30 mins run of huge whitewater including the famous Hawaii rapid. I was feeling really stressed to run this rapid. The deal when you run the Mista for the first time, you lead the group, well I was way to scared to run it at first so I bailed… So here we go into the first rapid, I follow the legend “Bren Orton” there was a sick wave right before the rapid and I caught it, was so much fun surfing that super cool wave. I looked at on my left and guess what Bren was surfing too !! A second later it flushed me, I realized that I did not know where to go but luckily Bren flushed too, he knew where to go! The first rapid was SOO big for me, I was not used to that big whitewater so I was yelling all the time because it was so good and so scary!! But little did I know first rapid  the smallest rapid of the river. 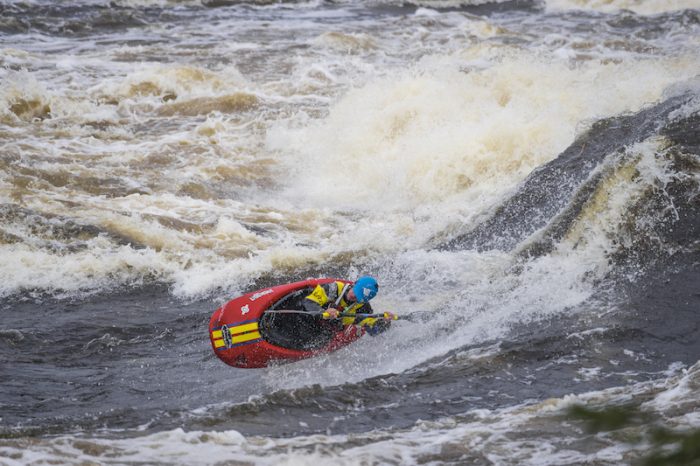 Hawaii rapid, the biggest rapid of the river was next, I was following Raoul Collenteur, as I dropped into the rapid, Dane did a wicked airscrew right next to me. Then I cruised to the left to avoid a huge hole on the right, maneuver to the middle to avoid Hawaii, a huge curler that falls into a massive crashing hole. Then there are just massive waves to the end of the rapid and it is just so much fun and scary. The rest of the river is just big waves and big holes. My first day at Stakeout, I am already in love with this river.
The following three weeks;  “You Gotta Be Kidding Me », not many people know this wave. The wave only comes in at a small range and was prime level ! I watched a couple people going in to see how to avoid the hole. I’ve heard that a couple got body recirculate in this massive hole so I was scared. Got in my boat, I missed it. So got back up and surfed it, the next time I tried an airscrew, so I spent the whole day there trying to airscrew and miss the pour-over.
Since I started kayaking I’ve always seen videos of Dane, Nick, Bren, Benny…surfing Detonator, and I’ve always been wondering « Will I ever get the chance to surf Detonator”. And Guess what ??? Detonator was in the next 3 days !!!  We were so excited, we rushed to the river. There was Detonator and after a couple attempts I caught it. It’s really technical to catch this wave. Paddling up, I was thinking about what would I do If I caught it, I was thinking I would throw the biggest airscrew of my life. So that’s what I did. After 40mins of missing the the wave, I caught it and threw a airscrew, not the biggest one but it was still pretty big. Then I was so happy and just wanted to do it again, Raoul did a huge one right after me, then David had a really big one too. Later in the day, I did a pretty big one… It was crazy surfing this wave, I felt like I was flying all the time, when you are at the top of the wave, you see the 3ft drop below you, It is just so much fun. 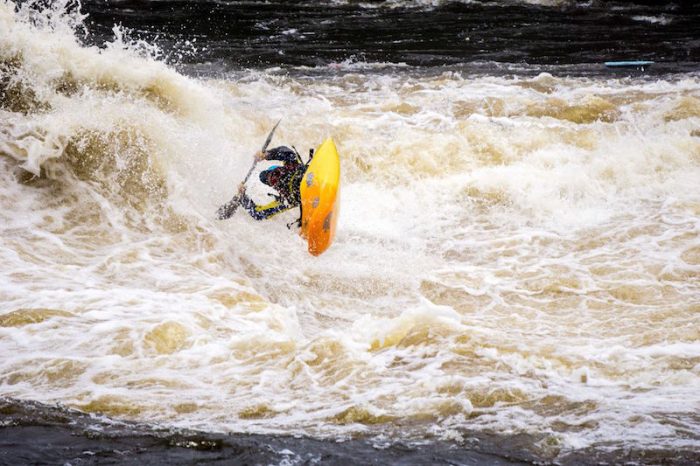 My favorite day of all Stakeout !! Everybody was there: Dane, Bren, Kalob, Nouria, Doug, Raoul, Brooke. It was higher that day, I caught it less times that day but did more tricks. Everyone was fired up, Dane was throwing massive airscrews, silly flips, Kalob threw a massive pistol flip, Nouria and Brooke did big blunts and me I threw the biggest airscrew of my life. I was so happy
The day before the « défi des grandes rivers », the Pattersons brothers hit us up, said that they were going to do a little expedition on the Mistassini, they had seen a wave looking down on google map. A group of us dropped in, the river was pretty chill, we scouted it and we ran it, after that,the river channeled into a gorge that we needed to scout. It was NOT good to go, so we should it our boats and walked it. Lucky we didn’t run it, all the water dropping into a massive pour-over and there was no lines. We paddled to the wave and scouted it, It was a massive, smooth wave. I tried to surf it, I missed it, I was really scared. It was the biggest wave I’ve ever surfed, then Brooke dropped in and the wave just crashed on her and she had to surf it, she was the first person ever to surf this Google wave. The water was so hard that I could feel the hull of my boat moving. After a couple more surfs, I realized I couldn’t leave this wave until I tried an airscrew, I threw a massive airscrew that was as big as the one in Detonator.
Sunday was the comp day, We all meet in Dolbeau, we were at least 70 people. After a briefing they gave us our bibs, and they told us “the comp was on Pillars wave ». The number of competitors dropped to 30. Pillars wave is a sick green wave under a bridge, followed by an other wave, after that sick wave, there is a MASSIVE pour-over which is really scary. I looked at the wave for the first time and saw that massive hole below it, I managed to do one ride before the competition. an hour per heats, best 3 tricks counted. 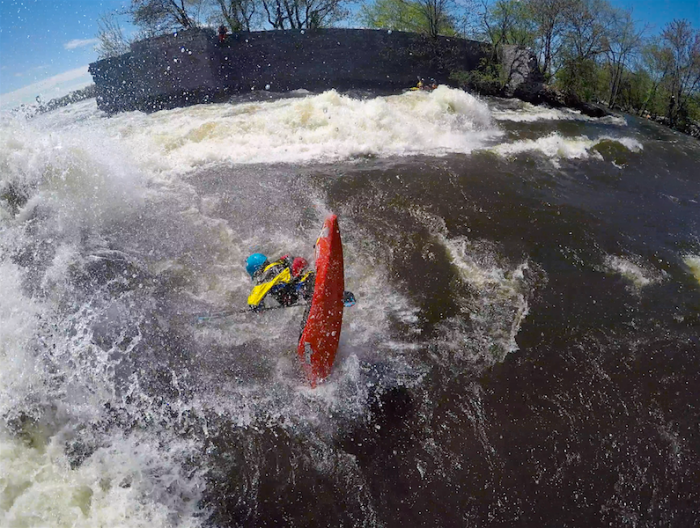 I was in the first heat, Dane was the first to go, I was second, I caught the wave, did a panam and flushed. But I was stoked because I didn’t get stuck into the hole. Benny, Bren and other good paddlers were going huge and doing so many tricks. Nuria Newman dropped into the wave, did a blunt and got stuck into the pocket hole, next to the big pour-over, ended up swimming, It was terrifying. I was scared and had just seen Nouria getting destroyed.
My goal was to do at least one big trick, so I managed an airscrew and then got out, time was almost done and I didn’t want to get trapped into  the pocket. The competition field got smaller due to the consequences of the the pourover. The competition was wild and eventually won by Benny. Amazing experienced
I spent my last few days on the Mista doing Joy laps with the boys, we headed down to the Ottawa River, nobody wanted to paddle, we were all so tired, after a day break. Nick, Dane and Bren picked me up and we drove to the Gatineau river to surf Lucifer, we spent all day there getting trashed, It was so much fun. I did a big bread and butter and got beatdown.
Stakeout was about to end for me, but not before checking the “Ruins » at prime level!! Ruins is a sick wave, way harder than it looks on video. To access to the wave, you have to ferry and paddle hard to miss the ruins to get to the island and the wave. You have to find the key to avoid getting eaten by the hole. At first I was scared to throw tricks, because i didn’t want to miss the eddy and have to walk and ferry 35mins back to the top of the eddy. Got a couple of airscrews and bread and butters and had a great day. 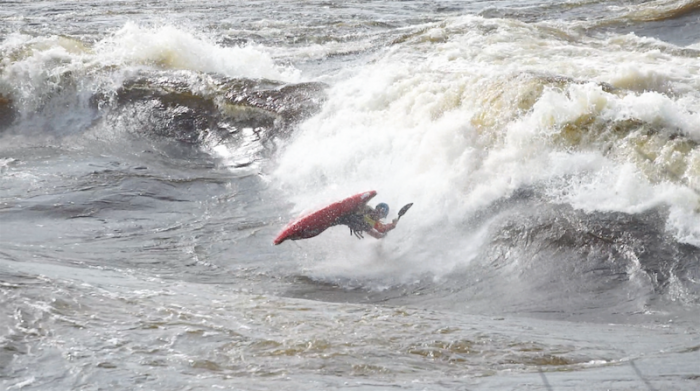 Finale for an excellent trip in Canada, Nick, Dane and I, surfed Buseater. The power of the river ripped my helmet off my head. Luckily It was the last day of an excellent trip.
Those 3 weeks in Canada were intense, I paddled everyday, I experienced fear, pushed my limits, I surfed Detonator, Lucifers’s anus and the « Google” wave. I pulled the biggest airscrew I have ever done. Ready for Stakeout season next year!