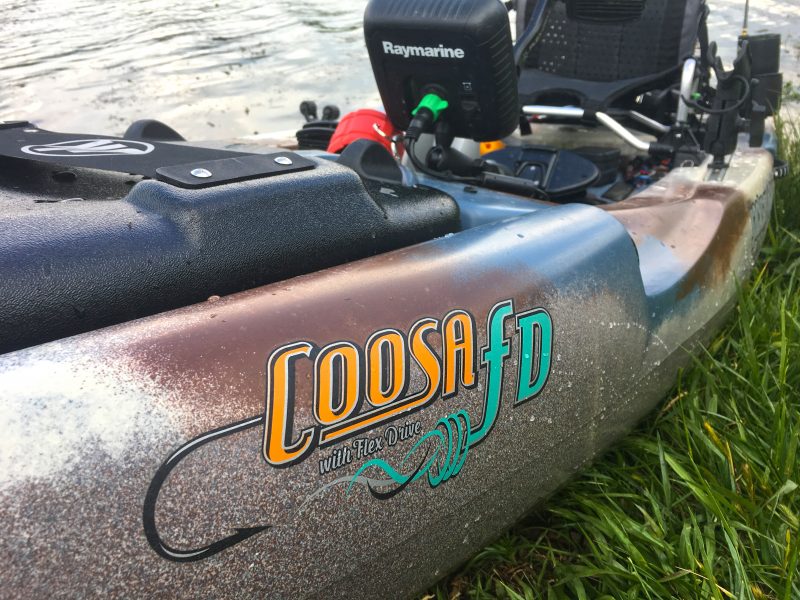 The late spring morning dawned quietly enough. A few hours later the wind kicked up to between 15-20 MPH – nothing like a touch of a challenge to get things started! Largemouth bass and crappie were the quarry; Coosa FD was the vessel. 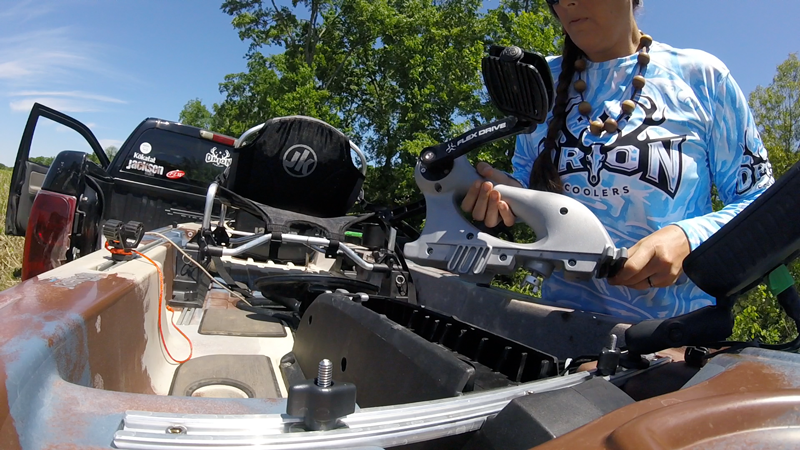 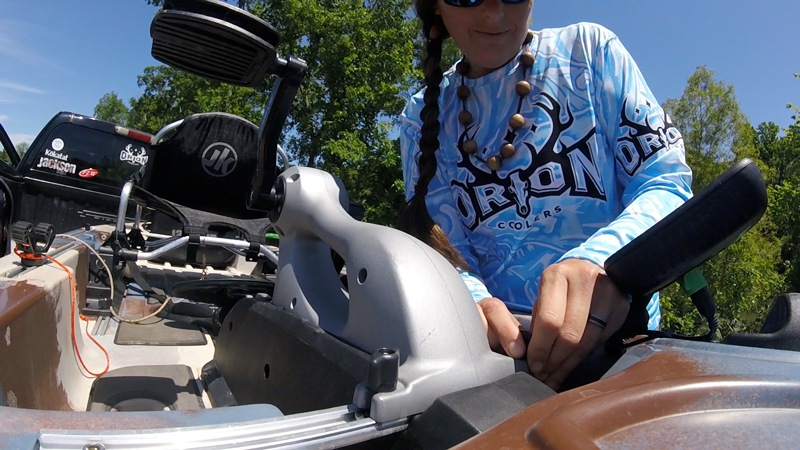 Following an extended period of rain, bass were transitioning from shallow spawning areas to secondary cover. A jig would be a challenge to throw under these conditions, but increasing weight to a 3/4th oz from a 3/8th oz jig would provide additional contact given the conditions. Also queued up – a spinnerbait with a hammered copper willow leaf blade.

First, to get the FD into the water. 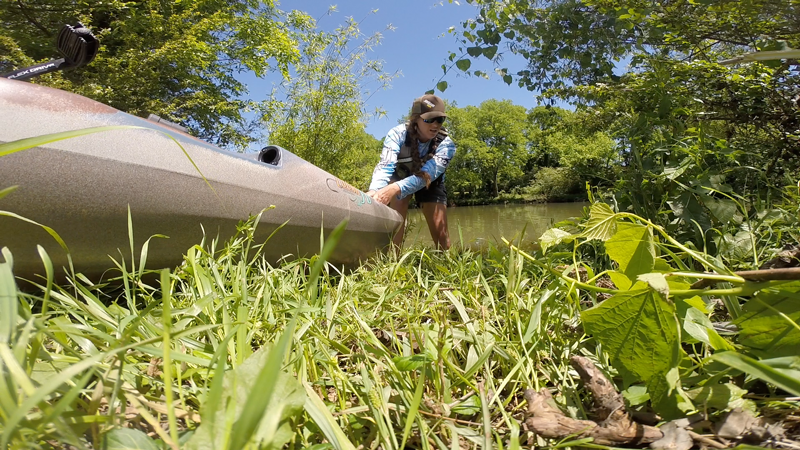 After climbing aboard, the search began. Not traditionally a ‘cover a lot of water’ kind of angler, the pedal drive said ‘hey, let’s go, let’s go!’. My partner Joey Monteleone was in his Big Rig paddling into the wind. The goal? Position ourselves to let the wind push us back while working the bank. After kicking back in the seat and starting to pedal, I caught up easily. 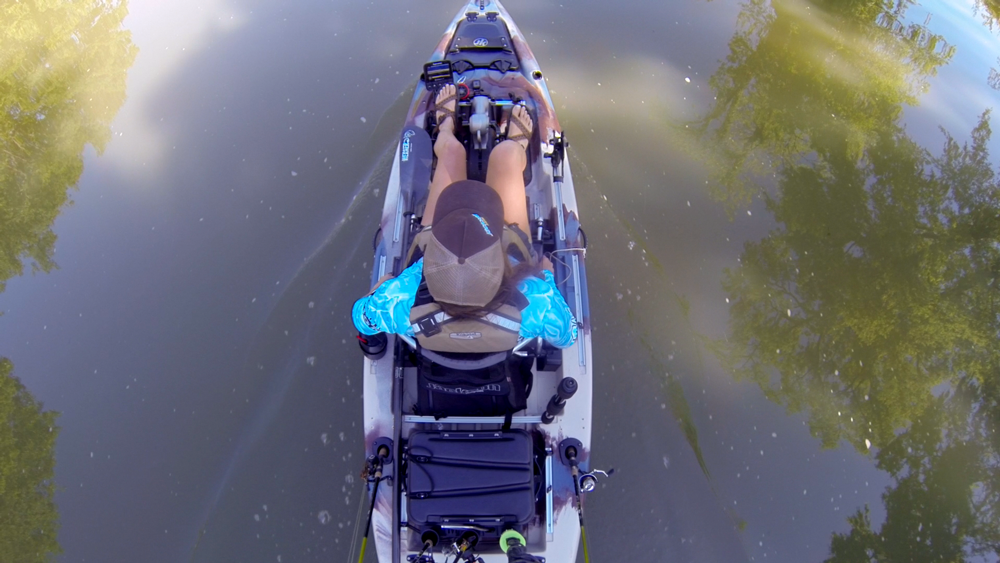 From the top of the drift we started working brush piles just off the river channel. Picking along the bank, gliding into position and backpedaling allowed me to run the jig over the submerged timber at precisely the right angle. Reward? Time and again bass picked up the jig on the fall and headed toward deeper water. A quick snap of a hookset… and they were in the boat! 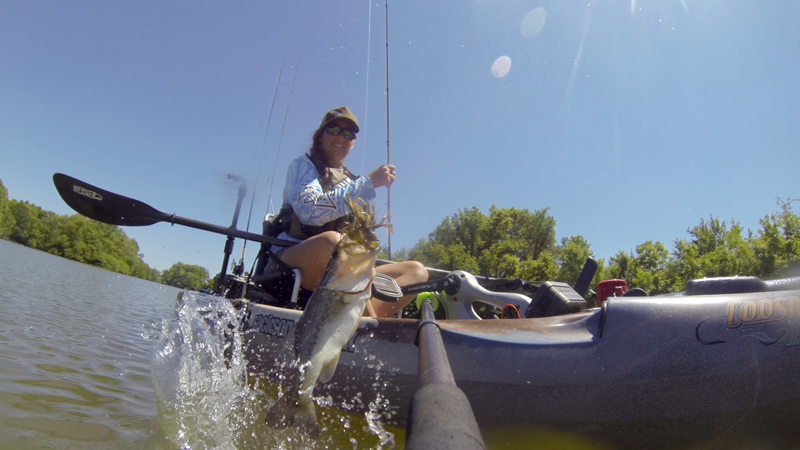 As we continued along, I noticed Joey had been blown nearly back to where we’d started. It occurred to me then that the daggerboard protecting the propeller was also creating a substantial amount of resistance below the surface of the water and slowing my drift. Getting a jump on the nemesis of the kayak angler’s, the wind? Too good to be true! Much the same way a daggerboard below a sailboat keeps it from blowing over in the wind, the daggerboard below the Coosa FD increased the stability -and- wind resistance. Win!

Standing, sightfishing and casting along the bank felt completely secure, despite the wind howling on all sides. 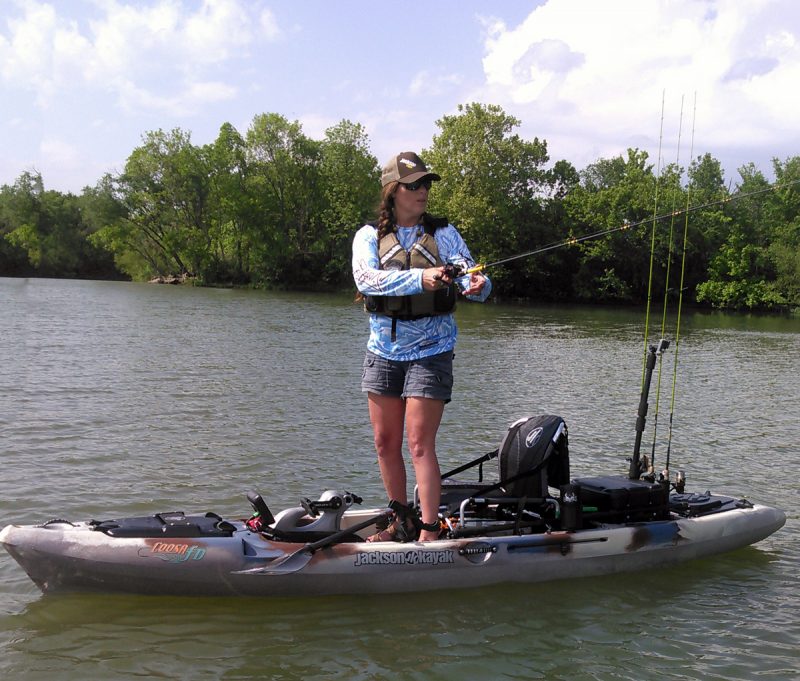 After a few more bass it was time to circle back around to run the shallow, sloping bank and weedline on the edge of the river channel. Time to work a little more quickly – and to pick up the spinnerbait. Casting past the inner edge of the weedline and navigating through with rod corrections kept the blades whirring through the clear patches, and ‘killing’ the lure at the edge caused it to flutter down like an injured shad. At one such spot, it looked so perfect I found myself holding my breath as the blades spun through the thick mat, and on letting the rig flutter down at the edge… WHAM! A massive flash, an aggressive sweeping hookset and there at the end of my line was a gorgeous largemouth. After pulling her out of the weeds with my 30lb test braid we snapped a few quick pics and sent her on her way. 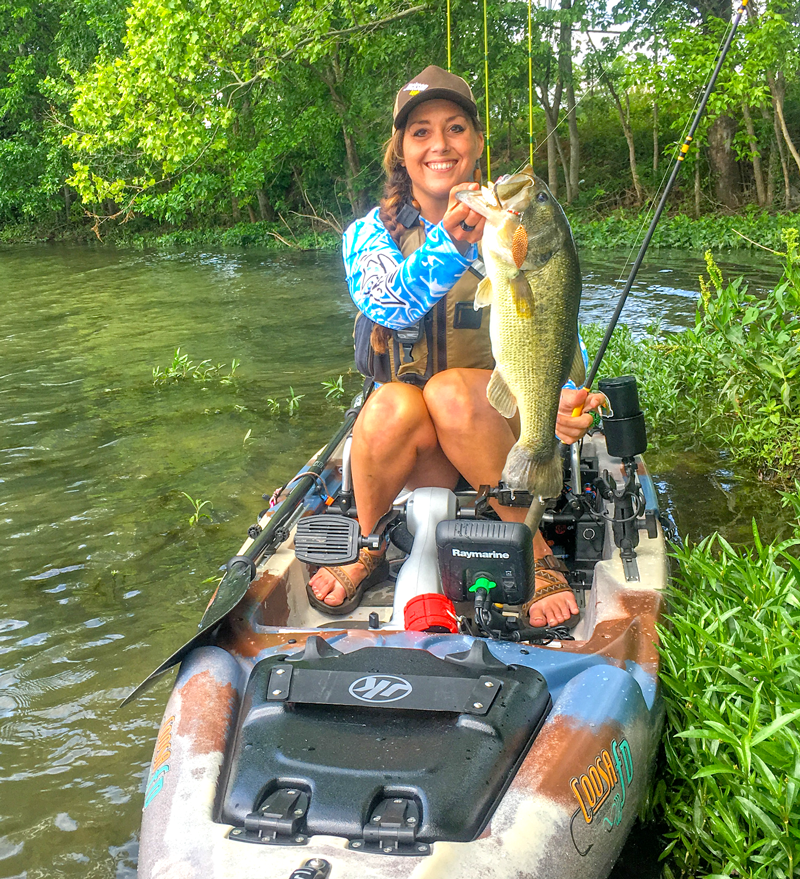 As much as I love bass fishing, there’s something about big crappies that gets me fired up! Spinning back around and peddling toward a tree in about eight feet of water (one of the deeper pockets in this particular body of water), cruising up, reverse pedaling and throwing a black and chartreuse tube on a 1/8th oz lead head brought success on the second cast. 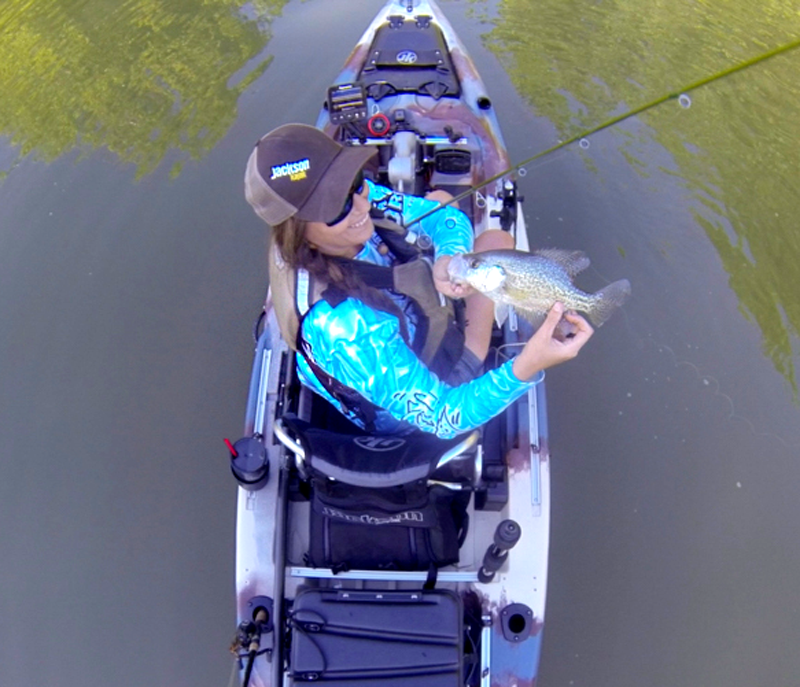 Maintaining position was a breeze… rolling back and forth, trying different angles over the same pile brought several more crappie to the boat. Slow retrieve, letting the tube pendulum back after landing in the water and giving an occasional pop drew strikes. 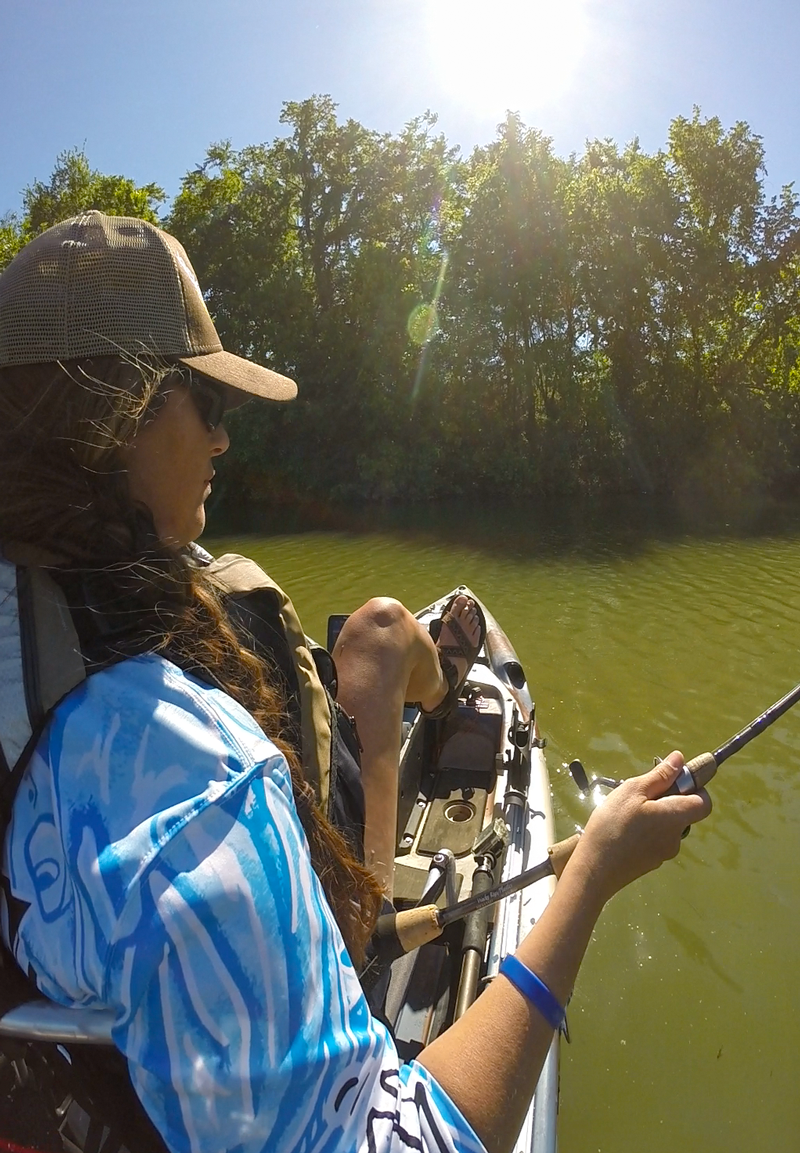 As the sun came out the crappie were tighter to the wood, meaning the likelihood of getting hung went up exponentially! Most maneuvering was with pedals and the hand rudder control, but a quick nudge with the paddle provided a quick pivot point as needed. 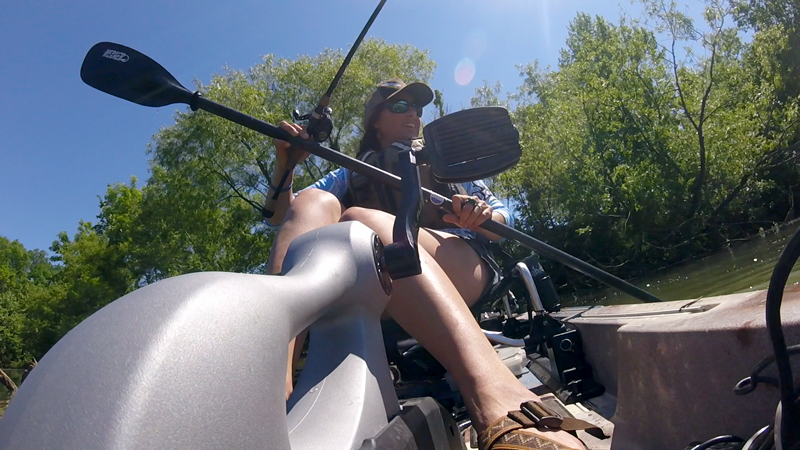 After a running through a particularly gnarly section and feeling my way through the limbs of the tree, I let the tube drop and spiral toward the bottom. When my line coiled I knew I’d hit the muddy riverbed and I started vertically jigging, occasionally feeling the lure pop up over a branch. One hop, two hop… and POP! Another good crappie to satisfy that panfish itch on 2# test. 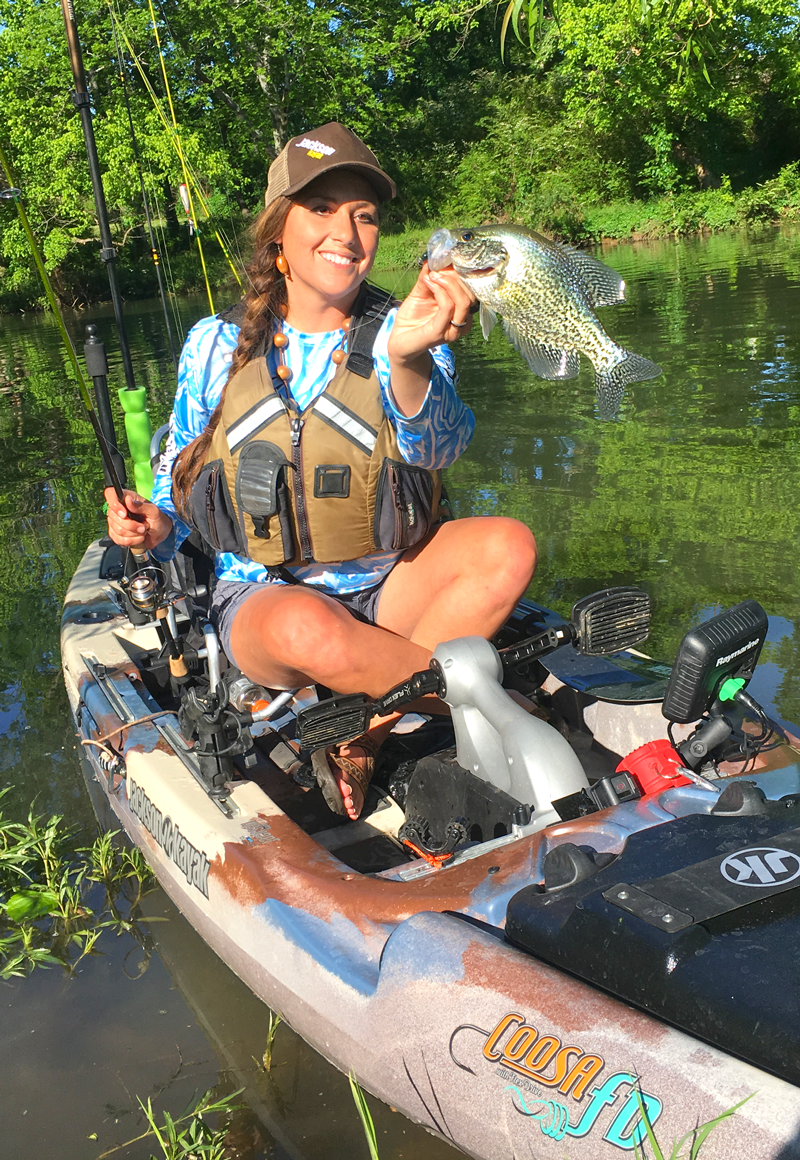 Picking up the jig for one final pass, pedaling to maintain position while drifting I decided to target deeper structure in the deepest part of the pool. The bass were still eager to eat.. and crashing through brush piles in the depths of the river tricked a few more into taking a crack at the jig. 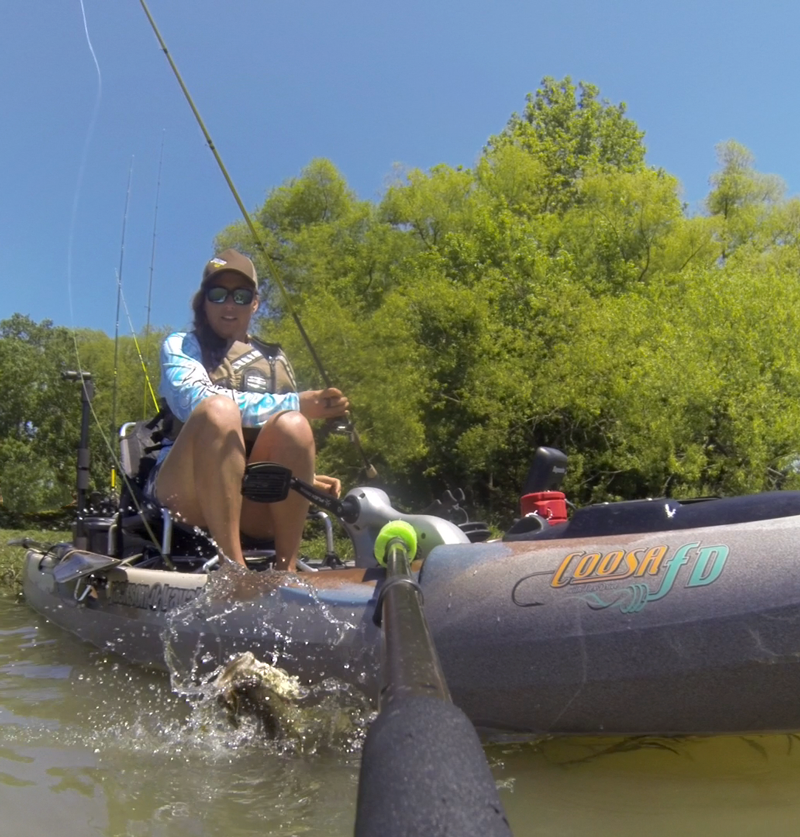 Adjusting position hands-free while fighting fish was a new one on me and admittedly… I like it! Excited to spend more time in the Coosa FD on different types of water this summer – I can’t wait to see how it perform in other arenas. You can get specs and learn more about the new Coosa FD here: https://jacksonadventures.com/blog/kayak/coosa-fd/.

See you on the water! 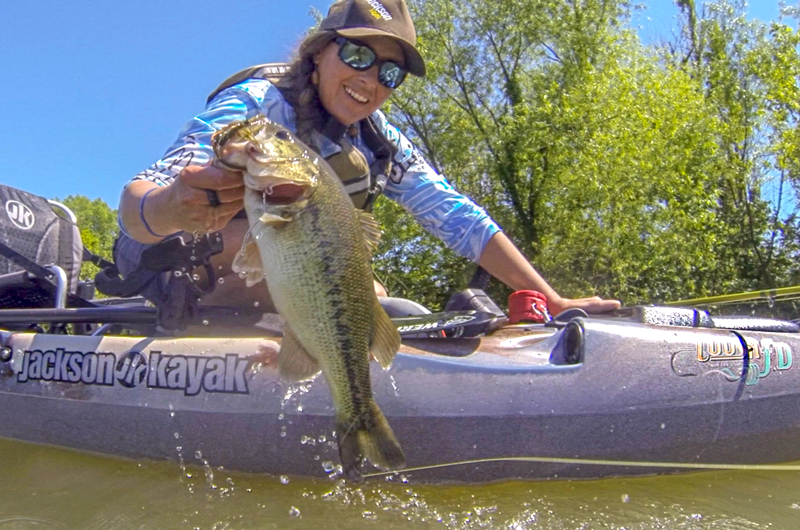