I took off work Friday, May 5th to attend the Cheat Race and start off my favorite fest. This would be my first Cheat Race and it turned out to top off the Cheat Festival just right. There had been rain, so the river was a good level with the Upper Blackwater and NF of the Blackwater both running. All my paddling buddies were headed to the Blackwater but I kept to my promise of running the race and trying to spend more time with my lovely girlfriend Leslie and our friends who are non paddlers but love Cheat Fest for the music and community of passionate West Virginians.

We showed up and set up camp in the best spot, right in the center of the festival in the Volunteer section. I was frustrated because we spent all day getting ready to go to Cheat Fest which caused us to get there with only an hour to set up camp before the race and the predicted rain set in for the weekend. I frantically found the race venue, signed up, set up our camp, said hello to friends and family, drank a beer, set safety, and walked my way through the festival site carrying my Karma UL to the race site. 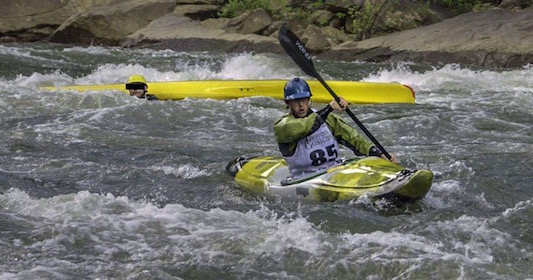 A lot happens in an hour race. Photo: Jeff Macklin

The race site at Albright was packed full of people, way more than I expected, and way more than at the 2016 Gauley Race. There were old, long glass boats, wavehoppers, the new school creek race boats like the Karma UL, playboats, creek boats, and rafts! I spotted a few people I knew and WAY more people I didn’t know. We all paddled out for the mass start lining up and fighting the current until they blew the horn to start the race. It was a mix of nerves and excitement as I was saying hello to everyone knowing I was about to collide with them and fight for position in the rapids to come. They called out the 5 min warning when I felt a nudge from behind. It was a long time friend Sam Hess who I actually started paddling with and grew up with on the Gauley in Nicholas County. He actually reminded me that 20 years ago was our first full spring of paddling! What a great feeling to start the race with! 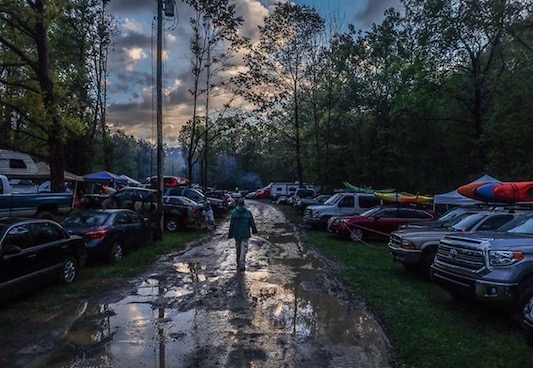 Steady rain did not stop us . Photo: Jeff Macklin

The horn blew and we were off! Andrew McEwan and the other race specific paddlers stood out as they lined up in the front and took off with perfect form. I was able to stay in the head of the pack at the beginning passing a Dynamic Duo team and a few other plastic race boats in the same category as me. There were several paddlers with great form that were hard to catch up with in the beginning. I was actually having a hard time passing a female paddler who was flying in the flats. I had great lines in the current and could see that I was able to gain on the faster paddlers in the rapids. I was right behind two Green boats waiting for my chance to try and get ahead of them. We entered a rapid and they both charged left. I felt a few feet further left would give me the faster line. At that moment I went from barely catching them in the flats to shooting up next to them as my faster line continued to move left around a big hole causing us to collide. The lead paddler had a few choice words for me as I pushed her towards the hole keeping my spot in the faster current. It ended up being Big Nasty rapid. She was not happy and continued to harass me and intentionally try to knock me off line, which didn’t work. I just had the faster line and wasn’t about to slow down just because there was a hole in the rapid. And rubbing is racing. 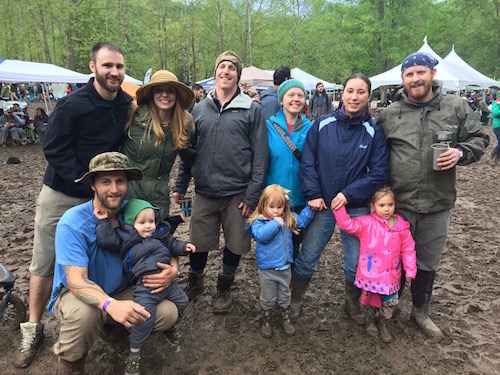 A family that goes to Cheat Fest together stays together

I got into position and kept my rhythm thinking I was ahead of the other plastic, creek race boats with only a few Mirages and Dancers in front of me when a guy paddling another Karma UL started gaining on me with the female paddler drafting him out for blood. We entered another rapid where I was in the dominate position once again to have the faster line. I stayed ahead for that rapid until the flats where the Karma UL paddler took off around me and left me in his wake! He turned out to be Milan Rusnak from the DC area. Boy is he FAST! The female paddler I battled with was Ashley Nee, team USA. Not someone I wanted to piss off, whoops. 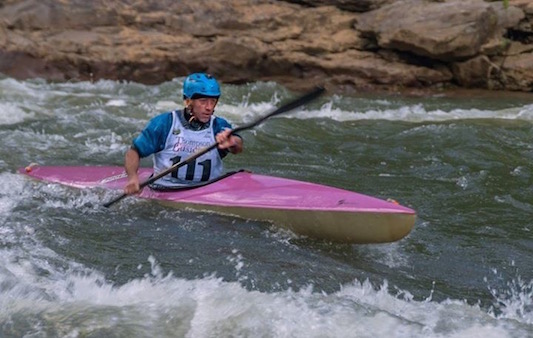 The rest of the race was great. So much happens in that short period. I ended up 5th in my category and 17th overall with a time of 1 hour and 12 min. I luckily got shuttle with my good friend Sam and headed back to the fest where I got to hang out with good paddling and non paddling friends and listen to music. 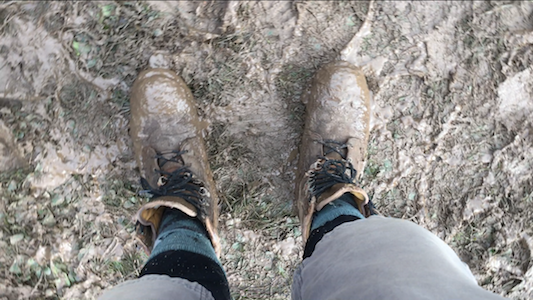 It was a Mucking good time

Cheat Fest is a community event that brings music lovers, native West Virginians, and paddlers together. It isn’t dominated by the Kayak companies trying to hock boats or overrun with whacked out music lovers there to party. The emphasis seems to be on gaining support for the Cheat River drainage. And that vibe creates a grass roots feel that makes you want to come back. I talked to so many people who said this was there 20th Cheat fest. People who don’t even paddle would say this was there favorite festival of the year. And the spirit of support for the event could be felt in first trimmers, volunteers, hardcore paddlers, soft core paddlers, and seasoned festival goers!
Saturday I woke up late and promised Leslie, my lady, that I wouldn’t spend all day doing laps on the Blackwater. Luckily the Top Yough was running at a beefy 1,000 cfs. And I have never done it! I got up with a good buddy Corey Lilly and we busted out a lap. I was in my Antix and found plenty of current to play with. I botched the first move at Swallow Falls, saw a beautiful rock formation below a huge waterfall from a trib, surfed some nice waves on the fly, found some kickflips among the high water boofs, and had an unbelievable first run. I have had chances to run this many times in the past but just never got after it. It was nice to save it for a perfect moment like this. 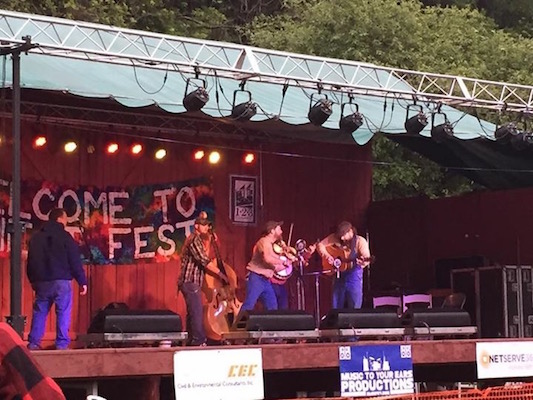 Jamming out beside the Cheat

I got back to the festival site that was now a giant mud pit. Seriously, the steady rain made for the ultimate mud. My friends were on it and laid a bunch of hay down so all the kiddies could run and play without being temped to play in the mess. And what a good group of friends and family we have. All loyal West Virginians that exert what it means to live in this state. They are not there to paddle but to just be with each other, volunteer, sale their locally made Hawk Knob Cider, let their kids play, listen to music, and play music. 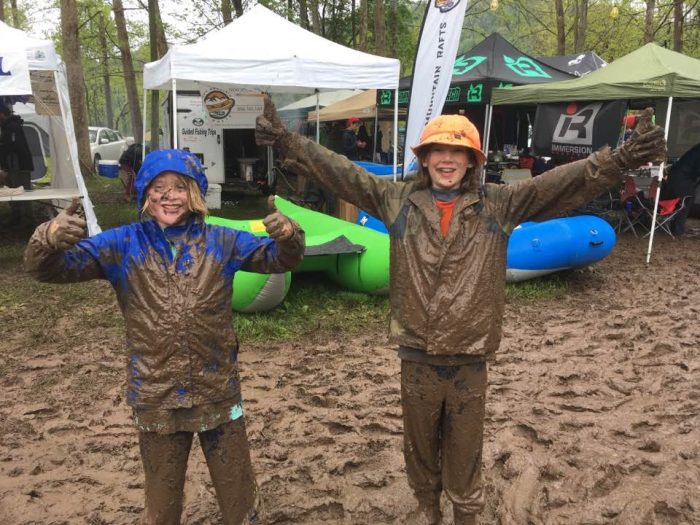 I met so many local legends. One of which was Dave Bassage, the founder of Cheat Fest. At around 2:00 in the morning I got to hear the history of Cheat Fest as he ran me through how the idea came to be and all the work it took to clear the land and create the event. He said the first one over 20 years ago was small and they didn’t even have a roof over the music stage because it didn’t occur to them it could rain. Beside him while he chatted away about the proud history was the current event coordinator Ellie Bell who set in a camp chair beside the fire wiped out as the fest had come to its peak. There just isn’t another Festival like this one. Good rivers, good people, and held for the right reasons. Hopefully I can get a little faster for these long races and kick some butt next year.
Shane Groves