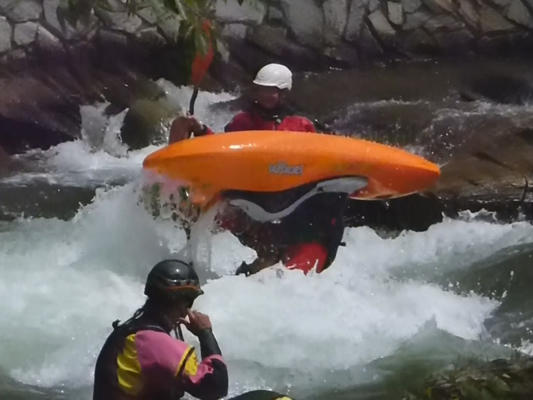 The new 2013 Jackson All Star is a great boat. I am six feet tall and weigh about 165 lbs. and fit perfectly in it. And I can easily make it tighter or looser just by adjusting the outfitting. I’ve heard flat water tricks are just a bit harder than the Rock Star and 2010 All Star, but from what I’ve seen it doesn’t take long to adapt and nail them. Unlike with the Rock Star, the learning curve is short-lived. After only three days of paddling the boat, I’ve dialed it in. The same thing goes with playing in holes. The first surf I took I was able to throw all the tricks that I have been able to do in the Rock Star. Everything I’ve heard about it is true, the loops are massive and they stick very easily. I did find it a bit harder to get the McNasty around but that might just be me, but once you get the rotation, you can’t miss. I thought the Phonix Monkey was easier in the All Star than in my Rock Star. This is because the pirouette is the easiest part of the trick for me, finishing the loop is the hard part. But with the new 2013 All Star the loop part is just as easy as a regular loop.

This boat goes big with every trick, even wave tricks. I took the All Star to Rock Island, TN and was throwing huge air blunts without much effort. And this boat is not just a freestyle kayak; it runs rivers really well too. I ran the middle Ocoee, an easy class 3 stretch, and almost never had to brace. The edges are very soft and do not catch as much as the older boats Jackson Kayak has come out with. Throughout the run, not a single wave or hole had grabbed my stern either. This is because the new All Star is a bit longer than the Rock Star. This is by far my favorite kayak. The fact that it can double as a class 3/easy class 4 river runner makes it even better.

Check out the boat in action on the Ocoee River. There’s some funny carnage in the hole on Broken Nose rapid!