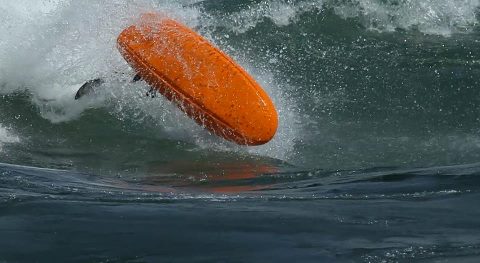 First Review of 2013 All-star
Just a quick review of the new All-star after paddling it off and on daily for a week.
Me:  165lbs,  30” inseam,  5’9” size 11 play booties.
Compared to Rockstar Medium
Fit:  The cockpit rim is lower than the Rockstar, I went ahead and added a 200 Sweet Cheeks like I usually do and the knees feel lower.
The Foot area is larger… letting my toes go outwards towards the side with air in or foam behind my Happy Feet instead of having my toes pointed towards the bow all the way at the end.
Bow looks different, interesting view looking down the front of this boat because instead of a ‘scooped out” curve it’s a straight line from cockpit rim to bow tip, making the bow look wide and round .. like a UFO.
Stability:  initial stability is much improved, even with a similar height seat to the Rockstar it’s a bigger boat feeling, requires a bit more lean to edge and a bit more turbulent water to flip you.   Secondary stability is up as well, you can balance leaning over at 45 degrees no problem.
Bow-stern stability:  you’ll feel the extra 2”.  While the bow can still go under it’s less likely to pearl to vertical on an eddy line and the stern is less likely to slice when you don’t want it to.   It also requires a bit more effort to do plowing enders, bow stalls and stern stalls as it’s just a slightly bigger, rounder shape.
Speed:  flatwater speed is improved,  but wave surfing speed is MUCH improved!  On edge or flat to the wave this thing is a rocket.  Surfs flatter waves, goes faster on passes, can go further out on the shoulder, gets clean air on waves the Rockstar requires muscle to blunt on.
Edges:  Feel crisper, harder carving at low angles to the current, more stable when you land on them, deflect harder on a bigger bounce,  and they generate more air when you switch from one to the other.   While eddy turns and spins feel more forgiving, it rewards more aggressive paddlers who want to really put their body weight on a rail and launch into the air of it rather than just lean back and bounce it up.   Requires a bit more lean from one edge to the other, but rewards you with more stern pop over your head.
Flatwater Tricks:  Initially I was really challenged to get the bow down and cartwheel as the edges are wider and the bow feels bigger.  After a few sessions I learned the correct angles and it’s getting much easier despite still feeling like a larger boat.  Flatwater loops go bigger,  the bow stall and stern stall further from the surface so they require a bit of extra balance but I adapted within a few days.  In general I’d say it’s harder to do flatwater tricks but you adapt. 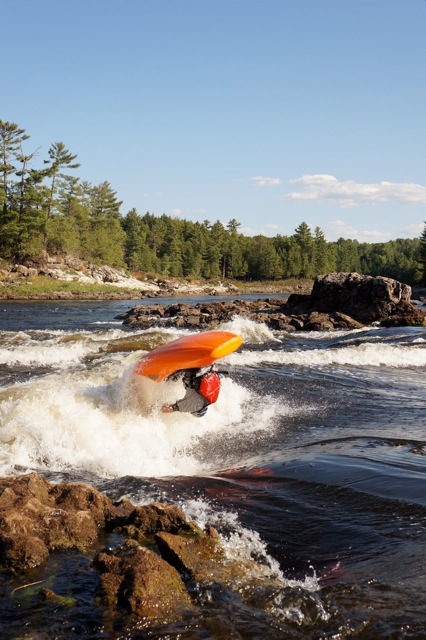 Holes:  Loops go MUCH bigger!  Maybe a foot higher on your best ones but requires a bit harder ‘tuck’ to bring the longer boat around back under you.   Cartwheels well – more retentive and poppy for sure, so you can cartwheel wave-holes like Pushbutton easier than ever.  On spinny tricks like Mcnasty’s and Phonic’s the bow feels a bit ‘duller’ because it’s a less slicey shape but the extra volume makes them stick much easier once you get em around.   Stern rises up really nicely for those
Mcnasty’s.
Waves:  WOW.   It’s SO much faster!   Catching steep green waves just go way easier and sticking tricks did too.   Pops up on a plane way before the 2010 All-star or Rockstar allowing you to catch the wave way easier and keep it planing really far out on the shoulder.  On Lachine’s Pyramid wave I was stoked to hit 4 blunts and a clean blunt in my Rockstar, then on my first ride in the 2013 All-star I got cleans both ways several times, then a helix and airscrews both ways!   The extra speed on this flat rounded wave made all the difference, allowing me to throw pass after pass instead of waiting for a break to send me down the face.     On Garb it’s retentive as heck…  coming back from way behind the foam pile or when there is none way off on the shoulders.    This is my favorite wave boat EVER! 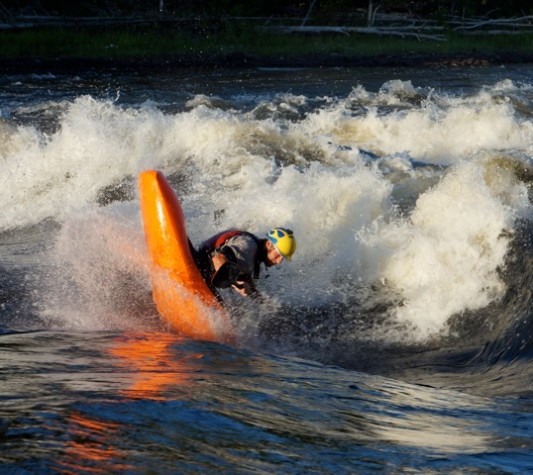 River – running:   faster for sure, easier to keep the bow up so I’m making the same moves I like in my Rockstar more often.   Will find out MUCH more when I hit the Gauley!
Can’t wait to keep testing this boat … or better yet get my own and stop having to share it with everyone else on the Ottawa…
Heading out to Garb… again..
Clay Wright
Shots:  stephen wright shot by clay wright