There are a lot of firsts this year for me.  First time in my Ibis, first time with my daddy’s camera, my first blog post (with help) and definitely the first time going far in my kayak.  One of my dad’s favorite sayings is “She gets that from her mom”, but loving my kayak I get from my dad.  He has been asking me to go out with him kayaking for years.  I’m 11 years old, so, about 10 1/2 years he has been bugging me to go.  He loves whitewater but I’m not so sure I’ll like it so I’ve been staying home till now.  Till I got my Ibis!  So now I’m stoked!  I can paddle, take photos and explore.

This past week we went to Lake Erie.  Believe it or not, this was my first visit to the Great Lakes.  Getting there was crazy, we were on one of Canada’s busiest highways.  At one point Sam, Dad and I counted 32 lanes across going through Toronto.  Daddy used bad words quite often but we just laughed.  We pulled into Rondeau Provincial Park on a Monday night, after the 9 hour drive, and set up camp with no one around us.  We had the park to ourselves because only our school board was out for the summer.  Sweet.  We quickly ran to the beach.  Amazing, lots of waves to surf and the wind made everything move.  Tall grass, birds hovering in the gusts, peaking waves and the sound of it all made the deserted beach even more spectacular.

Day one at Rondeau, Daddy packed us all up  and off we went to do some exploring.  The Rondeau Provincial Park is both a large lake shoreline and host to some amazing marshlands.  Our goal was to paddle 7kms to the marshland region, portage to the marshes, take photos and return in the same day.  Yikes!  Dads idea, not mine.  Sam my 8 year old brother, sat in the front of the Big Tuna with Daddy paddling.  Notice I said SAT in the front as Sam paddled only when he wanted to, and he rather fish than paddle, so daddy paddled most of the way himself.  The good news on the way out was that we had the wind at our backs.  The bad news was that with wind at our backs daddy said that it most likely will be a longer paddle back.  I didn’t get that until we returned and turned the coastal corner into 30 knot winds and 3 foot waves.  That story coming later.  The paddle in was fun.  We stayed 20 feet off of the shore, stopped for cool flower shots, did some fishing, did some surfing with the Ibis (very fun) and collected all sorts of stones and shells.  I am reading bird books and did a lot of work getting familiar with the birds that we hoped to see on Lake Erie.  We weren’t disappointed.  The birds were used to fishing boats so as we paddled we had a group of gulls and waterthrush follow us all the way.  There were many nesting areas with signs posted.  It was clear that the birds were nesting as the area was buzzing with noise.  Birds in nests make for great loudness. 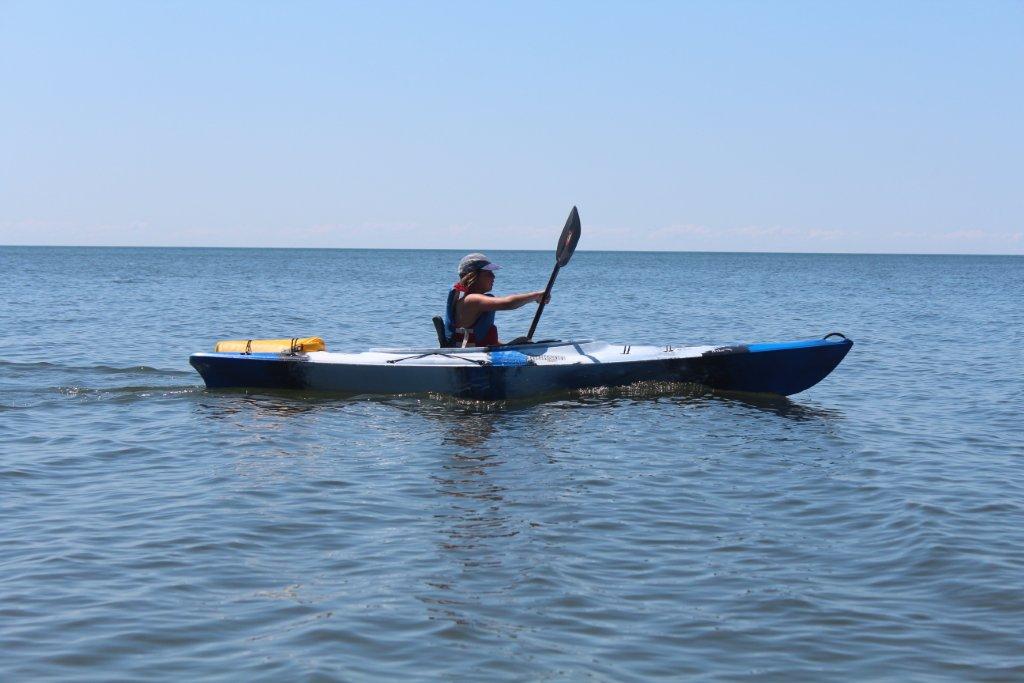 It took us a few hours to get to the top of the peninsula and the beginning of the marshland area.  Sam and Daddy got in and started fishing right away, only to find out that this was a fishing sanctuary and had to stop.  In the meantime I got out the camera and started taking photographs.  There were even more birds here!  Warblers,  We also saw a fox, a cool herd of white tailed deer and a large water snake, daddy says it was a Northern Water Snake, brown with stripes.  We saw signs of a recent snapping turtle migration with the bodies of a few dead baby turtles on the sand bridge between the marshes and the lake.  The marsh land was full of flowers and cool treed islands.  It created a scene that was very different from what I’m used to.  Beach, hanging mossy trees, surrounded by water and flocks of birds everywhere.  Spring here is cool.  This setting with no one but us around made it like a different planet.  Almost like Avatar, the movie!

We spent two hours paddling through the weed beds and then headed back to the big water.  As I said before, the return was a LOT different from our way in.  We started out OK, but after an hour we turned a corner and into the strongest wind possible.  Daddy says about 30 to 40 knots!  The waves started getting really big, so we stayed away from the white breaking stuff and out 20 or 30 feet more than before.   Going up and down that much got me nervous at first.  Then Sam started going WOOO HOOO and I realized that I wasn’t going to flip at all.  The Ibis was FUN in the waves.  The nose broke through any waves that broke, and the ride up and down waves was exciting.  It just made for a longer trip back.  We took about 3 hours with stops to get back.  I didn’t like the stops as much because it meant I had to surf into shore.  Surfing was fun to start, then when the wave broke, I had to follow my daddy’s instructions and keep it straight.  If I turned too far sideways I had to place my paddle right and lean a bit into the break.  It was all good though.  Easy.

When we got back to shore Sam and I carried all our stuff to the car.  I fell asleep in the back seat after my first trip back.  I was tired.  That night we sat down to the famous Indiana James camping macaroni and cheese cook out, I wrote my journal of the day and finished the night playing a game of Elite Seat Hacky Sack Tennis … don’t ask.

Rondeau Provincial Park rocks!  If you can get up here on a weekday in April to June you can have the place to yourself.  Two thumbs up from Emilie-Rose!  Thanks daddy for getting me my Ibis!