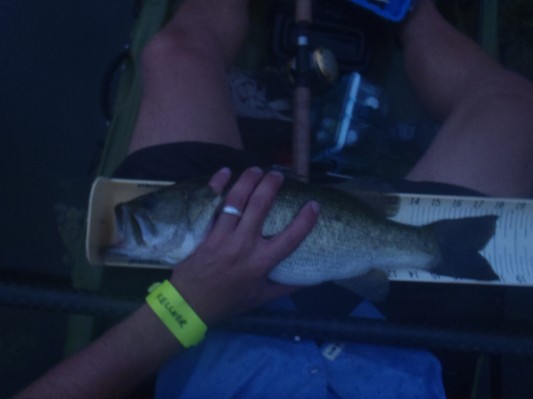 I flew in from Georgia, landing in San Antoino on Friday, June 1st (my birthday) at 3:15 pm. By the time we loaded up from the airport and drove the 3 hours home, it was 7:00. I had had zero time the week before we left for Georgia to pack and prep for the Classic, so nothing was ready to go. I rushed to pack my Cuda, Navigator, and 5 rods and reels. I gathered up most of my tackle and hit the road around 9:00 pm.

I had a 4 hour drive to the launch site on Lake Bastrop’s North Shore, plus a stop for some food and drinks that I would need in morning. I finally arrived at the park at about 1:30 or so, and set up camp in the bed of my single cab truck with a blanket and a pillow. My trucks radio stays on for five minutes after you pull the keys out, so I left the radio on the Coast to Coast AM show I had been listening to since 10:00 and closed my eyes. I was asleep before the radio turned off. Oh the life of a Tournament Angler.

The alarm on my phone went off what felt like 10 minutes after I fell asleep, but it wasn’t. It was 5:00 am, and time to ready the Cuda and check in for the tournament. I had a chance to do a few stretches to wake up, get dressed, and eat a banana before it was time to hit the water.

Just like every other tournament this season, I did zero pre-fishing and my fishing suffered as a result. I did not no where I was going to fish or what I was going to throw. I new from 10 years ago that the early summer, early morning, topwater bite could be good if you were lucky. The rest of the 15 anglers went right, to the south end of the lake, so what did I do…I went left. I went to the mouth of the discharge. I did not go up into the discharge, but stayed out on the flats and reads in front of it. 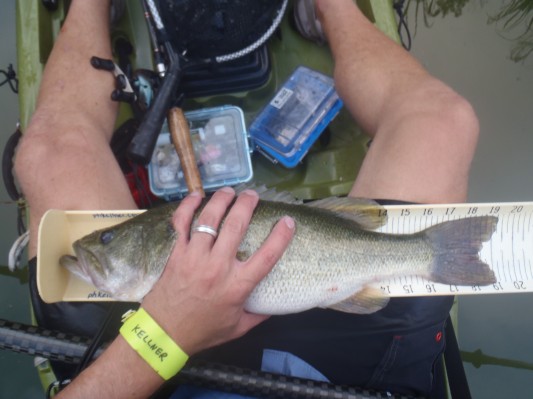 Shortly after making my third cast with a topwater popper, I landed this:

A decent 18″ bass. I knew I would need 4 more at least this size to win, but what a good way to start the morning.

A few casts later off the edge of some reads I landed this:

A 15.25″ bass on the same topwater popper. You can see the lure I was using in the net in this picture. It was another fish toward my limit, but hopefully this fish would be culled. 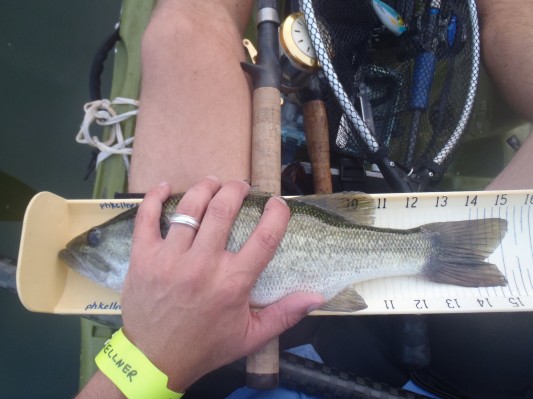 About I then proceeded to miss 2 fish in a row on my popper. One appeared to be large! But oh well, that is topwater fishing. And then the topwater bite turned off. I had a semi-mental game plan. To fish topwater early, once the topwater bite turned off, throw shallow running crankbaits and spinnerbaits in the same areas, and then start working deeper throughout the day. So…I switched to a spinnerbait first, and missed a fish, then switched to the shallow running crankbait, and missed a fish. That was four fish in a row that I missed. I should have had a limit by 7:00am. But I kept fishing, and a few minutes later I landed this big girl in the back of a cove in about 4 feet of water.

She went 19.25 inches. A good fish for Lake Bastrop and what I needed to stay in this tournament. Maybe my plan was working out too. Maybe I did not need to pre-fish.

I kept throwing in crank for about 30 more minutes without a bite. The sun was warming up quick, so I decided it was time to start working a little deeper. I grabbed the jig rod and tied on a custom P. H. Kellner jig in a sunfish pattern. I had already seen several sunfish swimming around in 4 feet of water or so, so maybe this would be the ticket. Quickly I landed this fish:

A good 16 inch bass, but hopefully another cull fish.

I kept on fishing the jig, and wound my way into Boy Scout Cove. There was no grass back there today, but I wasted way too much time to find this out. Pre-fishing would have helped eliminate this area, and I wouldn’t have spent an hour fishing in and looking for grass in Boy Scout. I finally gave up on the area, and started to work the reeds at the mouth of Boy Scout and quickly caught this fish.

Another 16″ bass on the jig, and my 5 fish limit. It felt good. It was 8:30 and I had a limit of bass, even with missing 4 fish and wasting an hour in the back of Boy Scout Cove. Maybe I was onto the bite flipping the reads with my sunfish jig. I kept fishing the jig for another hour and landed a couple short fish, but nothing that would help. I needed to find some big fish to start culling if I wanted a shot at the win.

I stuck to my game plan and started working deeper water. I fished everything from 10′ to 15′ water with crankbaits and jigs, but could not catch many fish. I caught a couple more short fish, but again, nothing that would help. So, after a couple hours I went back shallow with the jig. Again, a few more short fish but nothing else.

I then headed over to the dam with about 2 hours left in the day. I worked along the dam, and saw a few small bass swimming in the grass patches that grew there. I fished those for a while but the largest I caught was this:

I had about an hour left and needed some big fish. So…I grabbed the deep diver and started fishing deeper weedlines. I made a couple casts and caught a short fish. Then the next cast I felt a decent fish hit, then another fish slammed my crankbait. I had a double!!! When I got them to the boat I could see that they were both too small, and had 4 or 5 more small fish following them. I didn’t even bother to take a picture of my double. I was in a hurry and needed to maximize my casts. The next cast was another short fish.

I had 84.5″ of fish. I knew it wasn’t going to be enough to win and was I was a little disappointed in my preparation. But what can you do when you live 4 hours from the lake and you were out of the state the week before the tournament.

Overall, it was a great tournament though. I think each of the anglers who qualified for the Kayak Anglers Tournament Series Classic caught a limit of fish. This just goes to show that these really were the top kayak bass anglers in Central Texas. I found out later that the winner was throwing frogs in the shallow water behind and in the reeds all day. Something else I would have know had I pre-fished. In fact, all day I was wishing I had brought some frogs with me…again, Pre-Fishing would have helped. Oh well. I had a blast. It was fun, and an honor to fish with these excellent anglers.

The guys from KATS put on an excellent tournament series. I think over 80 anglers competed in the tournaments this year. That is awesome! I would highly recommend you coming out and fishing next year if you get the chance. I can’t wait!