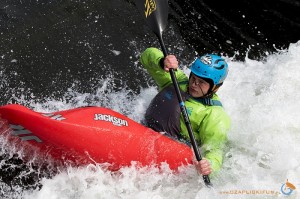 How did he get into kayaking?
Tomasz (Tomek) is a person who started pro-kayaking by accident. When he was 10 years old he had serious accident on Jet-ski which stopped him for almost half year on wheelchair but didn't stop his dreams. During one of short breaks between his leg surgeries his Dad helped him to sit in kayak and he started to paddle on the lake near his family house. When he finally started to walk again he felt that he need something different than his schoolmates are doing. From the insurance which Tomasz got after accident from insurance company young polish teenager bought his first kayak. That was beginning of his sports career. But there were also different sports disciplines. In the same time Tomasz was training swimming maybe that’s why he is still spending so much time on the pool during every winter but with his boat.
Tomasz is travelling across the Europe and flying to different places in the world looking for perfect places to train Freestyle and Creek boating.

"It's hard to say which medal or which event is the most important for me. In my career I won so far 16 Polish Champion Titles but I think my results in the international events are the most important. 3rd place in the World Championships in 2013 probably is my biggest achievment so far because I showed myself to the wolrd freestyle scene and I won first Worlds medal for Poland. That makes me proud but I know I could win the World Champion Title and I want to improve that result. My second best achievent is the 1st place in Euro Cup in 2015 when I won in 3 events (Wildaplen, Prague and in my home town Jelenia Góra). I'm happy that I can do something for freestyle kayaking organizing events like Beaver River Games and be coorganizer of Polish Kayak Games"