The Double Drop | Riding the Melt on Tumalo Creek 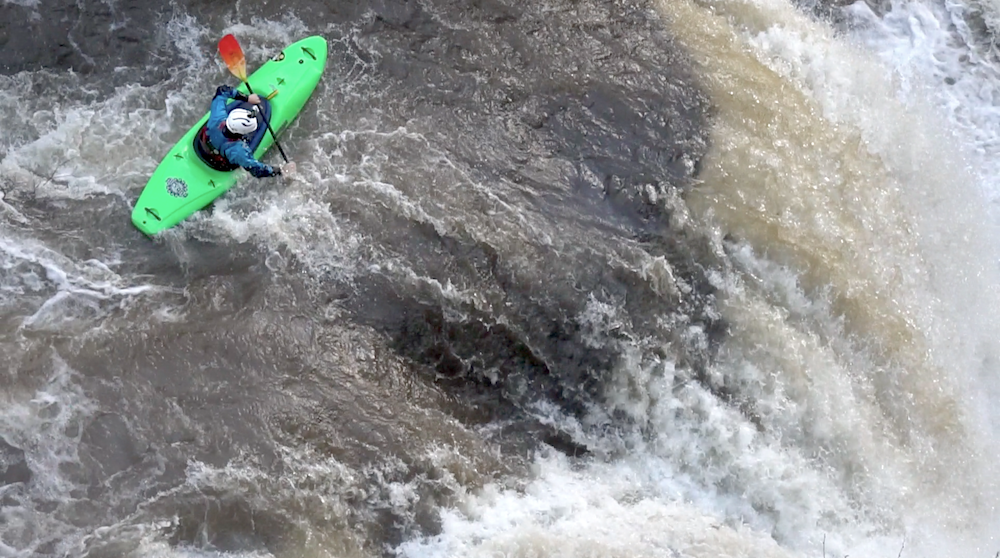 Wednesday as I finished up at work I got a text from Orion Junkins: “So much water dude, highest I’ve ever seen it, get stoked.” We’d been hoping all week that high temperatures would push the snowline up on the surrounding mountains and raise the water level in Central Oregon’s seldom run Tumalo Creek. Orion’s message was all the motivation I needed. I rallied home (admittedly a bit faster than I needed to), threw my creek boat on the car, and pointed myself towards Tumalo Falls trailhead. 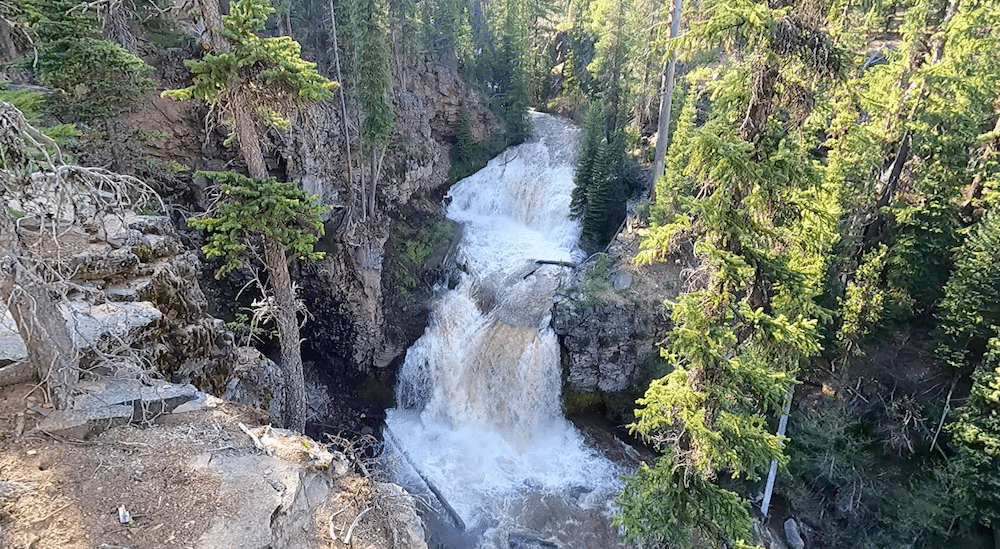 I arrived maybe 15 minutes later to find a giddy crew of local shredders already gearing up and debating the lines they might aim for. Orion and I were joined by Aaron and Kyle Anderson along with Gavin Biancucci. The energy in the group was palpable. Facing a bit of a hike, we decided to take only 2 boats up from the parking lot – best to minimize the lower body exertion, us being kayakers and all. Orion and I drew the short straws. We shouldered our boats and started up the trail. 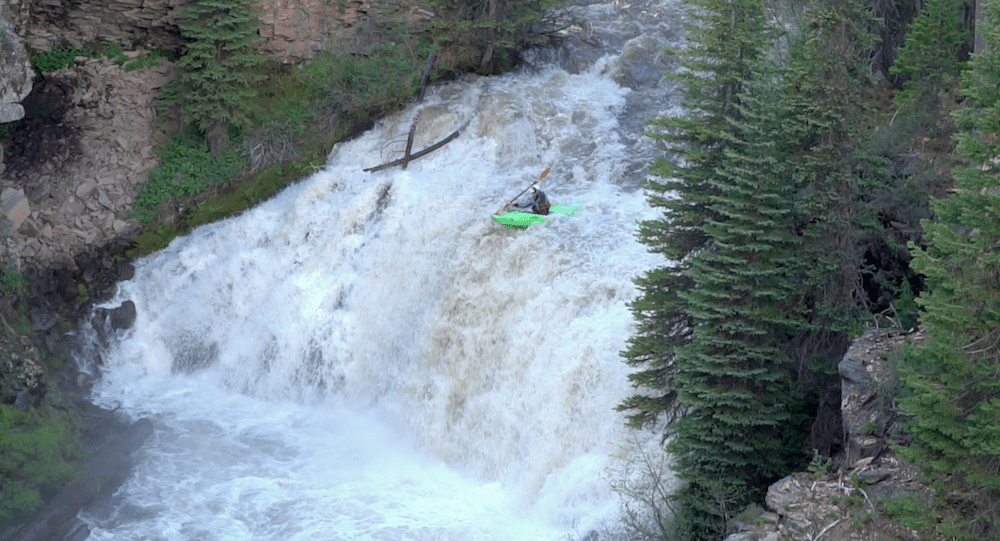 The rapid in question lay about a mile and a half up. Having only ever seen one picture of “the double drop,” as I came to know it, I spent much of the hike struggling to discern what I might be getting myself into. We stopped briefly at Tumalo Falls, a picturesque 100-foot cascade with an awfully enticing lip… and a catastrophically jagged landing. After day dreaming for just a minute, we got back to the task at hand. The trail zigzagged upstream, away from the water, gaining some notable elevation over the course of our trek. Our pace quickened at every ridge line as we hoped to catch a glimpse of the double drop, or any rapid for that matter. 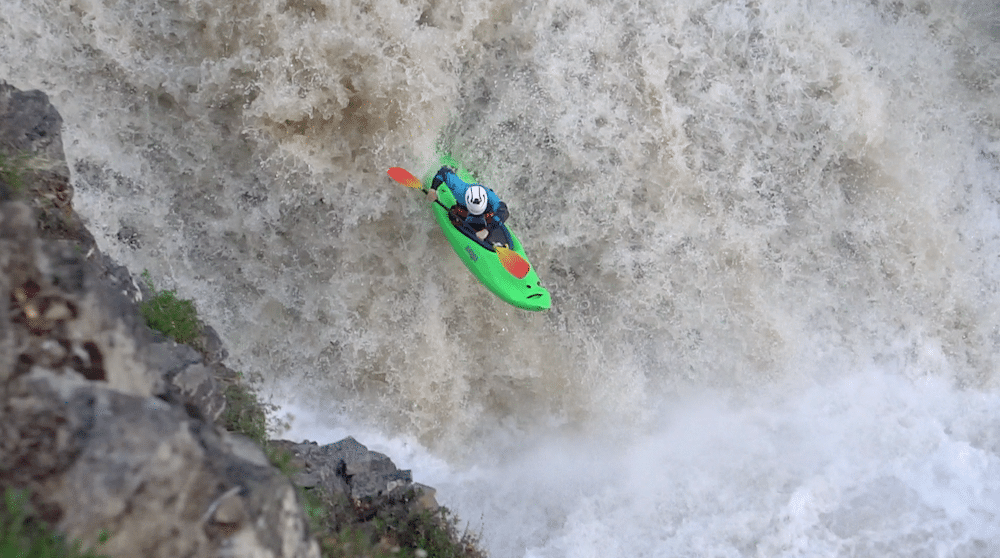 We didn’t have to wait long. Soon we found ourselves standing at the edge of a deep gorge, maybe 70 or so feet above the river. Downstream was a tight canyon jam packed with logs, some of which we’d inevitably have to paddle over if we decided to run the drop. Above, the river careened off a series of striking ledges, ricocheting off the serrated lava rock with a sort of unpredictable charm. “No #&$%ing way,” I stammered. Gavin agreed. 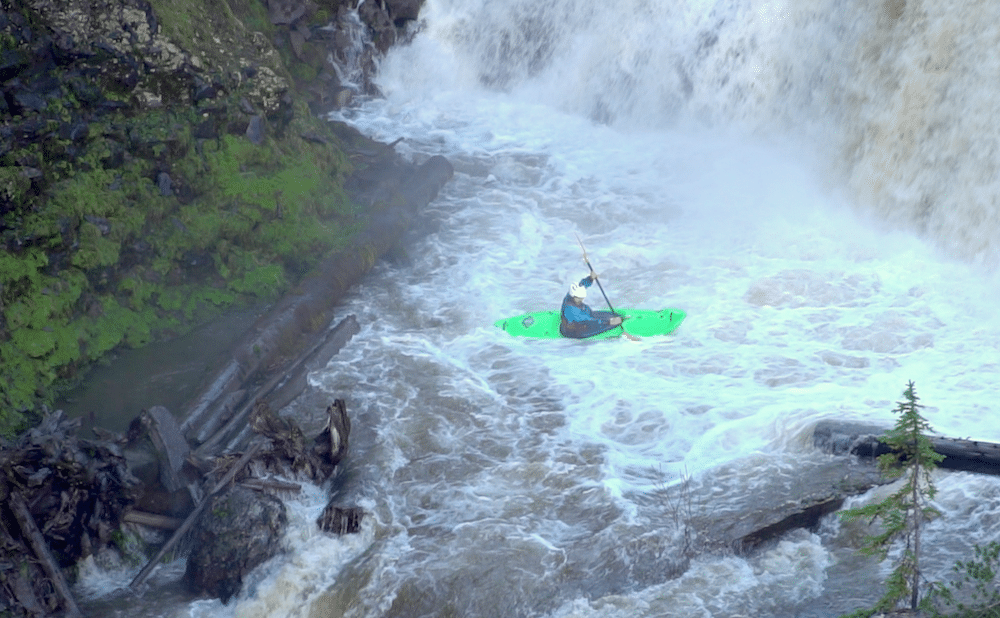 The double drop began with a ten-foot slide into a 15-foot boof, followed by a (very) brief recovery pool. Mostly, the pool was just a frothing cauldron with a couple logs hanging inconveniently into it’s right side. The second drop was clearly the problem child, a 25-foot ledge with a messy lip and an even messier landing. Feeling unsure, I began picking the landmarks I’d use to line up the second drop. Logs on the right made me wary of the traditional line – charge hard to the right bank, avoid a nasty looking crack in the middle, and bounce down onto a messy reconnect. The far left side would’ve looked more tempting had there not been a visible shelf jutting into the landing, maybe 2 feet under the surface at it’s deepest. That left the middle line – a shallow but rolling lip with a clear shot, albeit a narrow one, to the boil below, perfectly between the ledge on river left and more logs on river right. It was a tight window.

Orion and Gavin were keen from the get go. With hardly any hesitation, they geared up and ran to the top. The boys took one last look from the lip of the first drop, high fived, and disappeared back into the woods. Orion went first, roosting off the first drop with very little drama. Charging hard to the right, he narrowly avoided the slot and found himself lined up perfectly to graze a small flake coming off the right wall. Despite a small stern tap on the way down, Orion landed beautifully and resurfaced upright. I could see his grin through the full face of his helmet – he’d been waiting to run the double drop for five years.

Soon after, I watched as Gavin peeled out of the top eddy and lined up the first ledge. I can’t say I’ve ever seen someone skip so far out of a landing. Gavin skipped so hard he damn near missed the recovery pool altogether. Having so little time to line up the next drop, he struggled to charge right. Despite his efforts, he hip checked a log, fell directly into the crack, and corked 180 degrees mid air. Gavin landed entirely, I mean completely upside down. I could see his boat hit the shelf from where I was standing a few hundred feet away. My heart sank, this was just about the worst case scenario. Thankfully, Gavin rolled up quickly, avoiding the massive log on river right. I held my breath until I saw him flash a quick “I’m okay” signal moments later. We agreed that he’d gotten pretty lucky, the bow of his boat struck the ledge first, crumpling the bow a good four inches. A foot further forward and his body may well have taken the initial impact.

I have to admit, at this point I wasn’t sold. The right side, to me, seemed like too much of a gamble. Consulting with the Anderson’s however, the center line on the second drop became more and more enticing. The margin for error, we agreed again, was slim. We took a moment to discuss our landmarks from top to bottom: left of the curler on the slide – directly off the point of the first drop – sneak behind the spindly bush in the recovery pool – aim for the highest point at the lip of the second ledge – eyes on the boil in the landing – deep breath. Aaron and Kyle were fired up. I left them to their final scout and returned to my position behind the camera. 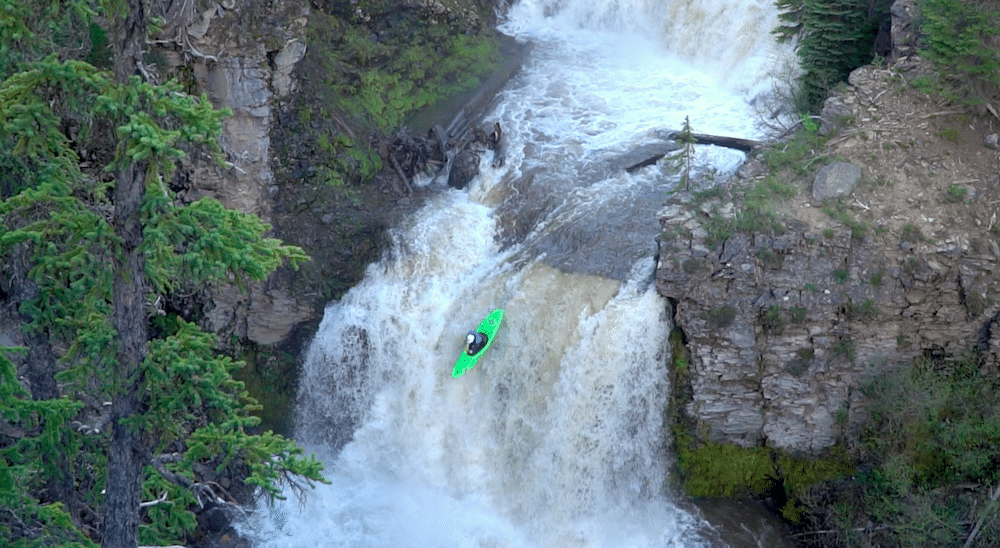 Soon after, Kyle peeled out up top. He flew over the first drop and charged dead center over the second. There was a moment of stillness as he seemed to freeze at the lip. It felt like he was in the air forever. Holding his weight forward over his knees, he landed with a perfect 45 degree angle, hardly getting his hair wet as he rocketed away from the logs in the LZ. Seconds later, Aaron left the top eddy. He floated effortlessly over the first boof and charged just a hair further left than Kyle had. I watched eagerly as Aaron made one final adjustment, shifted his weight forward, and plunged seamlessly into the boil at the bottom. They sold it well. I picked up my kayak and trudged towards the top.

The struggle to get down to water level was real, but as I sat in my boat and tightened the back band, I found myself enjoying a sort of empty mindedness that I’ve come to find quite comforting in situations like these. I knew my landmarks, was confident I could make every move, and trusted my friends to have my back down below should something go sideways. What more was there to think about? I took one last look over my shoulder and pushed off.

I hardly had time to splash my GoPro before I entered the first slide. Left to right – small stroke over the curling wave – big righty over the drop. I landed further right than the other boys had, deflecting hard off the boil into a small eddy. I gave myself no time to think about the logs down below, or the shelf on the left, or the crack above which I was about to ferry. I spun my boat around to point upstream and charged out of the eddy. I focused my eyes on the highest point of the middle flake and pushed left. I snuck behind the spindly bush as planned and planted a brake stroke on my right. As the flake grew nearer I feared for just a moment that I’d come in too fast. Too much momentum would have sent me flying past the flake, over the ledge, and undoubtedly onto the shelf below. My mind stayed focused. I dropped my edge and waited, trusting the process, holding my body position until I had turned almost 90 degrees. I watched as everything came together, feeling almost passive as my bow squared up to the flake. I was exactly where I wanted to be. I pulled my weight forward and planted one final stroke as my bow began to fall. I took a breath as the landing came into view and smiled to myself. The landing was so soft I hardly realized I’d hit the water. 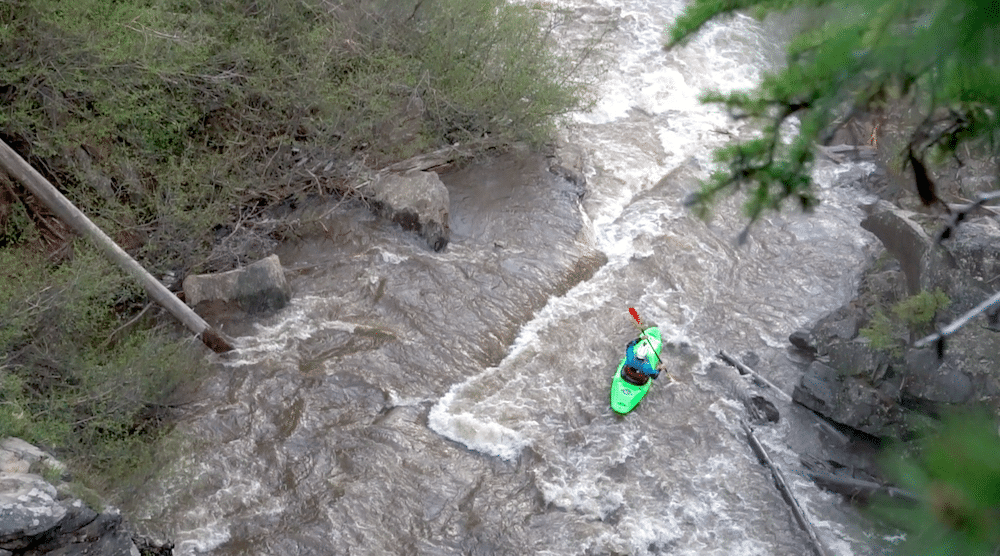 I heard the crew cheering as I resurfaced and bounced off one of the logs. My voice joined theirs and I threw my hand in the air, almost forgetting my proximity to the wood right behind me – one of the most satisfying lines I’d ever had. I meandered downstream a hundred yards or so, over a handful of barely submerged logs and into an eddy on river right, grinning wider than I had in a while. A single thought came into my mind as I looked back up and the crew on the cliffs above: “how am I supposed to get out of here?”

It took me 15 minutes to scramble back up the ravine. It probably would’ve taken me a lot longer had it not been for Kyle’s assistance. We reconnected with the others on the trail, covered in dirt from our escapades. Smiles, laughs, hugs, high fives, you name it, we were all fired up. After a celebratory beer, the crew gathered our belongings and began hiking back down the trail. The sun was dipping below the tops of the ponderosas and the woods had started to glow a warm orange in the evening heat. As we hiked, I savored the last drops of empty mindedness, reveling in the company, the setting, the general sense of adventure.

It was an absolute honor to be a part of this little mission with this group of people. I was the only “transplant” in the crew, everyone else had lived in Bend more or less their entire lives. Nothing makes you feel quite as much like a local as running a hidden gem, a secret stash, with people who have such intimate knowledge of the area. I cannot thank these gents enough for the motivation and humility throughout this excursion. With water levels now dropping and autumn fast approaching, the only trouble will be waiting for next year’s melt.