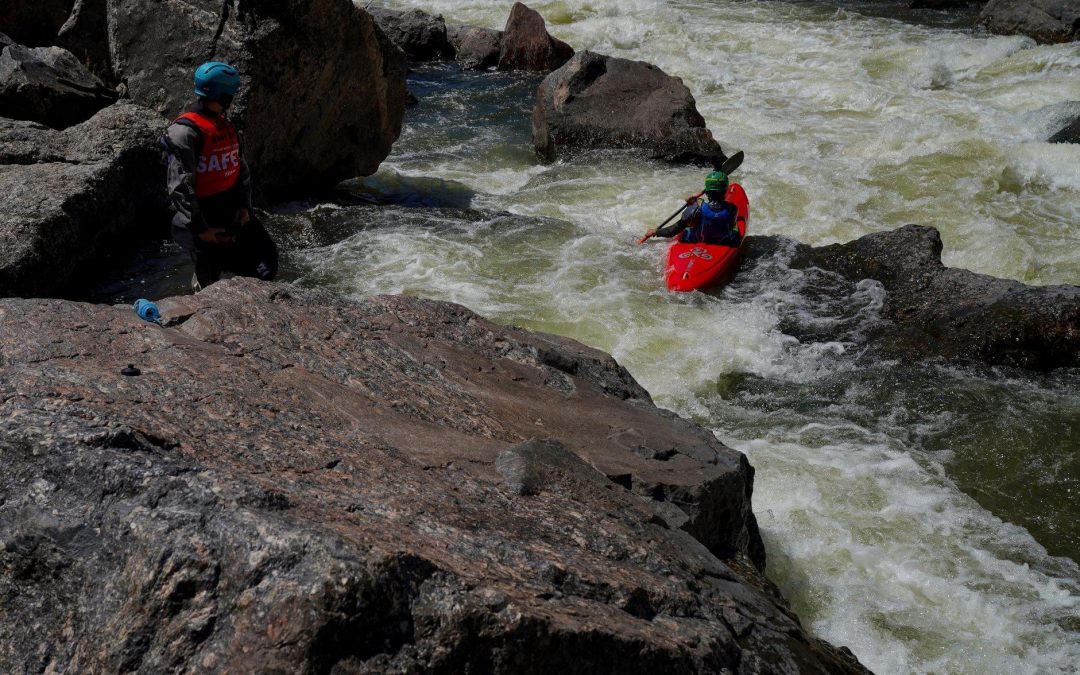 On the last weekend of August of 2021, the Gore Race went down. Just outside of Kremmling, Colorado, around 85 total people (including everyone in rafts) came out for the race. For those of you unfamiliar with Gore Canyon, there are 4 miles of flatwater before 3 miles of class 4/5 rapids and 2 miles of class 3 at the end of the canyon. Out of those 85 people there were only four people that raced in both the long boat and short boat classes. Those people included myself, Riley Frank, Mathieu Dumolin, and Cody Beach. Crazy enough, everyone that raced both was on the podium for both as well. Cody won long boat and got second place in short boat, Riley won short boat and tied second in short boat and Mathieu got third in long boat and tied second in short with riley. I won the juniors class for both long boat and short boat and also got 8th overall in both.

With this being my first race down this canyon I wasn’t sure if it was a great idea to race both especially only having paddled a long boat twice and my lines definitely weren’t the cleanest. But after a few days of deep thought I decided to race both mainly because there’s a lot of safety there and I know the lines pretty well.

The highlights for the race are 6, class 5 rapids that are all quite unique to each other. The first one being applesauce is a huge ramp that abruptly shoots up and mostly lands on rocks. About a half mile downstream is Gore rapid. There are four different lines you can take here which are the Sneak, the Professor, the Meat and Left Left. The main race line is Left Left which is just a huge boof off a curler with minimal room for error due to a massive hole called Ginger, to the right so if you drop in too low you’ll get pushed into it and if you boof too high you’ll bounce off the rock and go into the hole. Anyways, directly downstream from there is Scissors which has a huge flake boof into a massive hole but you can take an s move to the right to make it much less scary. And to finish off this short sequence is Pyrite. Pyrite is a funky ledge boof with not much of a hole behind it but the ledge is so unpredictable with which way it’s going to put you. After a bit of class 4 one of the most entertaining places to watch this race is a rapid called Tunnel. With a tricky lead in and a guard hole blocking where you want to go, there’s a lot of flips and hole rides. A little ways after Tunnel is Toilet Bowl. It’s a river wide extremely sticky ledge hole where the beta is, “If you get stuck in the hole, don’t try and fight it, just swim”. Luckily there’s a pretty easy boof off of the middle. Right below Toilet Bowl is the last rapid of the race called Kirshbaum. It’s a pretty long and continuous rapid of dodging holes and rocks which makes it pretty interesting if you get lost in there. In the runout of Kirshbaum is where the end of the race is.

The main festival/awards were held at Pumphouse rec area this year. Big thanks to American Whitewater for everything they do on all rivers including the Upper Colorado and for putting on this event every year! Also thank you to everyone who helps sponsor the Gore Race to help make it happen! I’m beyond stoked for next year and i will definitely race in both categories again!