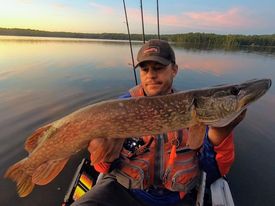 Who says big fish with sharp, fang-like teeth can only be found in oceans? Introducing the freshwater gamefish, Northern Pike and Muskellunge. Both are part of the Esox family and are known for their feistiness and bad dude attitude. And teeth…lots, and lots of razor-sharp knives that can slice and dice its prey, or chomp on an unsuspecting swimmer…YIKES! https://windsorstar.com/news/local-news/when-muskies-attack-windsor-swimmer-shares-toothy-fish-story 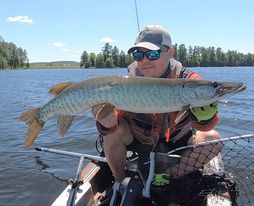 I’ve learned the hard way (more than once), that both Musky and Pike can easily transform a digit into a bloody mess. Care should be taken while un-hooking these fish for the money shot. Fortunately, that slice to your finger, knuckle, or thumb usually heals quickly. But on my last outing, a razored thumb washed in lake water, and not cleaned properly when I got home, led to an infected wound, and a trip to the Medical Centre. (I should know better to be honest; part of my job often includes cleaning wounds). The Doctor prescribed a course of antibiotics, which resulted in the ability to give a full ‘thumbs up’ less than a week later. 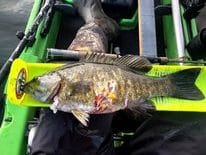 Storing a pair of fishing gloves in an easily accessible area of your kayak is a good idea. Wearing a glove as part of your Esox ‘Catch-photo-release’ routine will soon become second nature. If gloves are out of the question, properly cleaning any type of wound is very important. A first aid kit containing Polysporin and band-aids can keep you in the game, and out of the Doctor’s office. 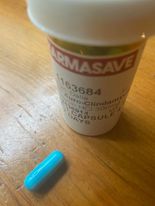