Finesse | The Solution to Summer Fishing 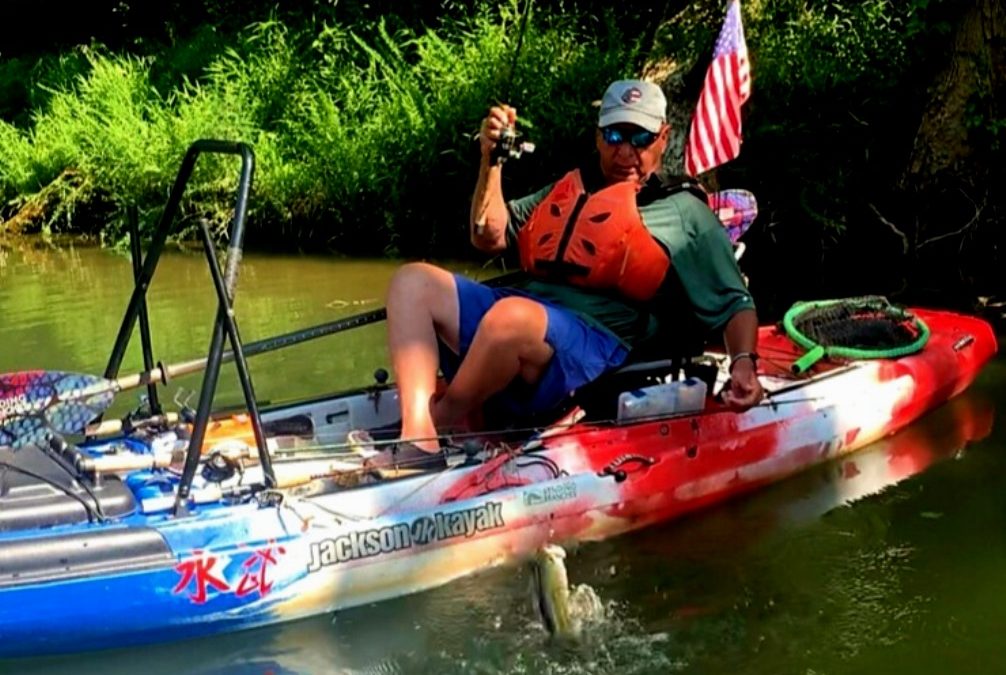 While summer is a great time to paddle or pedal your kayak the accompanying weather and water conditions can make it tough for fishing or more accurately catching. Taking the normal precautions for protection from the sun and of course zipping up your life jackets a few adjustments can help you land a few fish. After several seasons I’ve developed my own system for even the toughest days on the water during the dead of heat summer situations.

While my lure choices don’t change much the size of my offerings does. As surface water temperatures rise into the 80’s there is a natural phenomenon known as oxygen depletion. Breathing becomes harder for fish and they go into a slowdown. The strike zone is reduced and their willingness to chase down food sources is diminished. I subscribe to the theory big baits catch big bass but a few summer factors alter my approach to “getting bit.” Sometimes during the summer months water levels drop, the water gets clearer and freshwater fish of many species become more lethargic. Even these lazy largemouth bass, crappie, bluegill and others can be induced to bite with a different approach. The popular saying is “go big or go home.” Now is NOT the time to go big, in fact it’s time to downsize. The more diminutive baits are more likely to get gulped. Smaller baits even when closely scrutinized are less apt to be discovered as being bogus. Large lures offer details to their not being a natural food source. Switching to some of the same soft plastics but the smaller versions is a very effective tactic for most gamefish. Undersized spinnerbaits, small cranking lures, tiny topwaters and lures from each category are offered and highly recommended for hot water fishing. Using certain lures, lines and set ups has positioned me to catch great numbers of warmer water bass, crappie out of more than twenty feet of water and bluegill that wouldn’t bite anything else.

Generally a baitcasting outfit is still staged in my kayak but open faced spinning outfits dominate my boat space. Admittedly I’m a fan of medium, light and ultra-light spinning for the fun fight turning even small fish into a feeling of a big bass brawl. A hand sized bluegill will also make you question what that is at the end of the line on the on the lighter gear.

Managing space and lure choices calls for a couple of rods, say six or six and a half feet long, light action and a lightweight spinning reel. This rod facilitates the long cast and light line that the summer situation begs for. The reel normally has a line capacity (around 80-100 yards) will exceed the necessary amount of line to effectively present your baits. The rod and reel combination together weigh mere ounces (reel 5-6 ounces, rod 3-4 ounces) and makes a day long trip a breeze. Most major manufacturers offer light or ultra-light outfits. 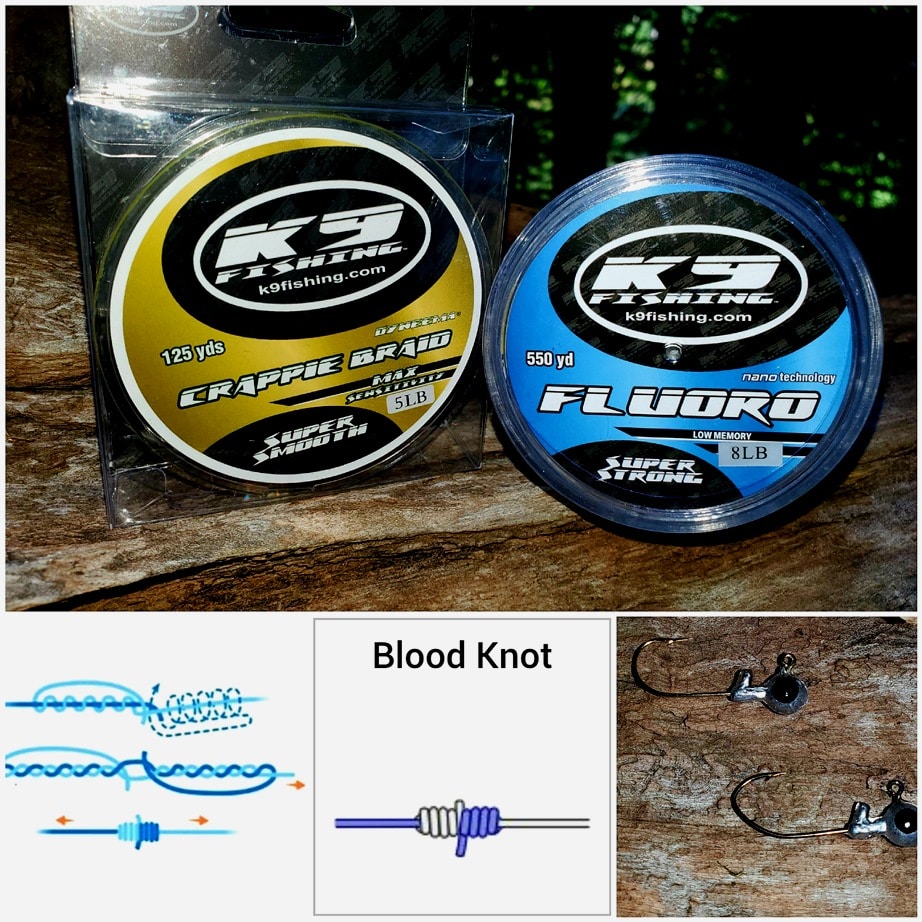 As far as line I grew weary of the dreaded line twist that seems to be inherent in the spinning equipment. A few years ago I made a move to using braided line and a fluorocarbon leader. The best lines for this application came from one company, K9 line. www.k9fishing.com . My system utilizes a few yards of monofilament line as a base layer and then comes the knot connecting braided line to then fill the spinning spool to almost capacity, then using a blood knot to secure the eight pound test fluorocarbon leader to the braid. I use a little less than a rods length of flouro. The logic: the braid virtually eliminates the twisted lines, the fluorocarbon is invisible and almost equal in strength to the braid making it ideal for fishing the “feel” baits.

This type of fishing will often get you hung up in cover and this line combination is so strong I often straighten a hook before the line will break! * Word of caution don’t “lean” on the line. You can snap a rod. You can free a jig head hung in wood by reeling down to it and pushing straight down gently. Lead heads are cheap, be willing to break or cut line. In a conversations about lead heads a new variety offered by MidSouth tackle www.midsouthtackle.com is incredibly effective. Available in a few sizes and head shapes the “sickle” hook lead head is hard to beat. * See photo. The offset configuration stays locked into the jaw of the fish so much that I keep a needle nose pliers handy to unhook and release my catches on this new head. My baits are always tied using the Palomar knot for ease of attachment and top knot strength. 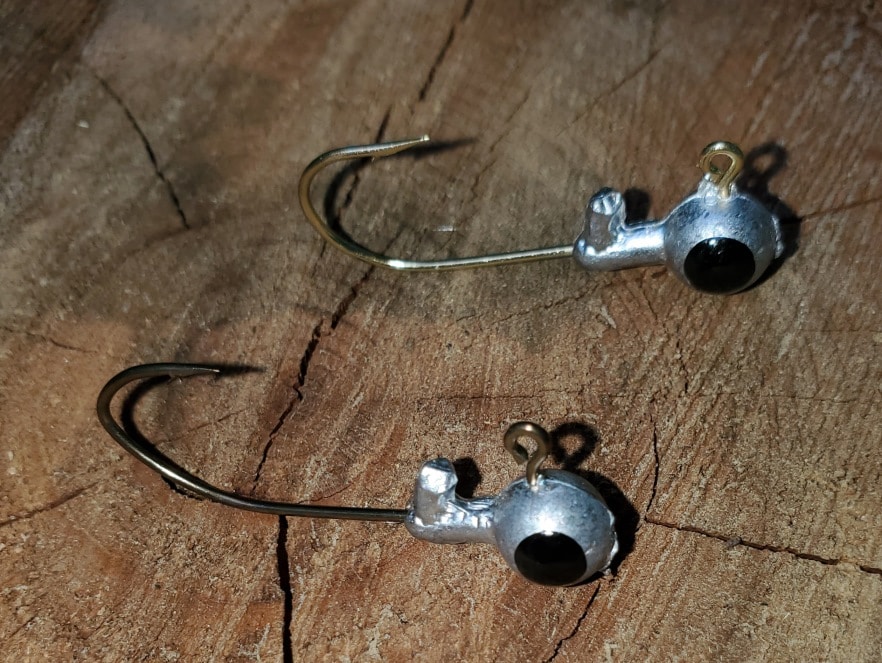 My summer specific tackle box has a few undersized spinners, tiny crankbaits and some surface lures. What lure category does dominate this system is soft plastics in a few various sizes, shapes and colors. With many rigging options available I can narrow down the decision for you. Of course there’s the standard Texas rig, Carolina rig, wacky rig and the shakey head set up. 90% of the time I’m using a 1/8th ounce MidSouth lead head and affixing one of these three (but not limited to) soft plastic lures. 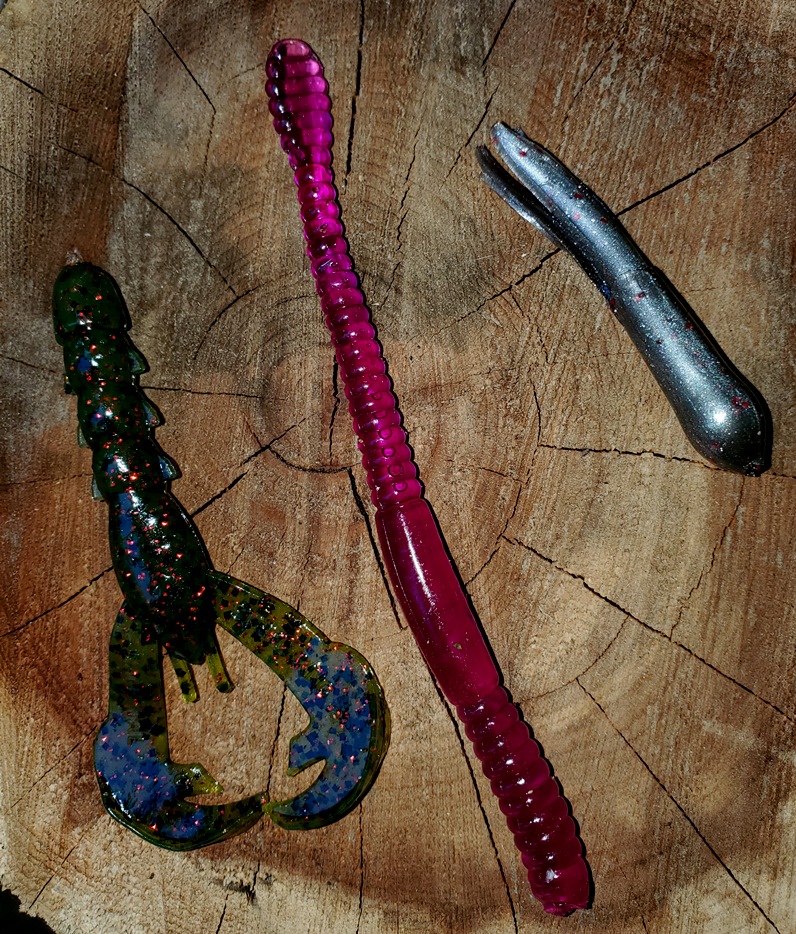 The Strike King Ragetail baby craw is deadly on bass but I’ve caught crappie and others on the same bait. The baby craw is a smaller version of the regular size Ragetail craw. Run the hook point up through the body turning the hook out to make the craw appear like a normal jigging bait. The claws undulate and make the bait almost irresistible to fish feeding on crawfish. Cast, drag, swim, twitch and repeat and wait for the thump or for the line to swim off, a quick snap of the wrist will drive the hook home. (This is where the braided line shines, sensitive but zero stretch) gives you the edge.

Next up, the Slider worm. www.sliderfishing.com Available in three sizes and a dozen and half colors the Slider 3, 4 and 5 inch models mimic the look of a natural worm but have the enticing quality of a small, silent easily swallowed meal. There’s a Slider specific head or you can use the normal lead head. Again a natural swimming motion, and the occasional twitch is effective but the fish will confirm when you get the speed and action right in the form of a “bite.” Again thread the bait on the hook to about the “egg sack” and turn it out for an open hook or you have the option to rig it with the point just under the skin to make it weedless.

Another staple in my summer (or any season box) is the MidSouth tube, particularly the 0095 Monteleone model silver tube. If it swims the 0095 will catch it. I’ve caught crappie, bluegill, bass (all three major species), catfish, walleye and almost every species of panfish on the small, flash reflective bait bearing my name. Once again simply thread the small plastic lure on the lead head and you have a great open water or close to cover lure the cures the summer time blues.

When possible I fish around the major moon phases to increase my odds in finding and fighting numbers and potentially bigger fish. The new and especially the full moon are the most likely time for hatches of natural food sources. Everything from mayflies, minnows, shad and other creatures appear around these times. Target a few days before, during or after a major moon phase to tilt the odds in your favor. A summer full moon is hard to beat. 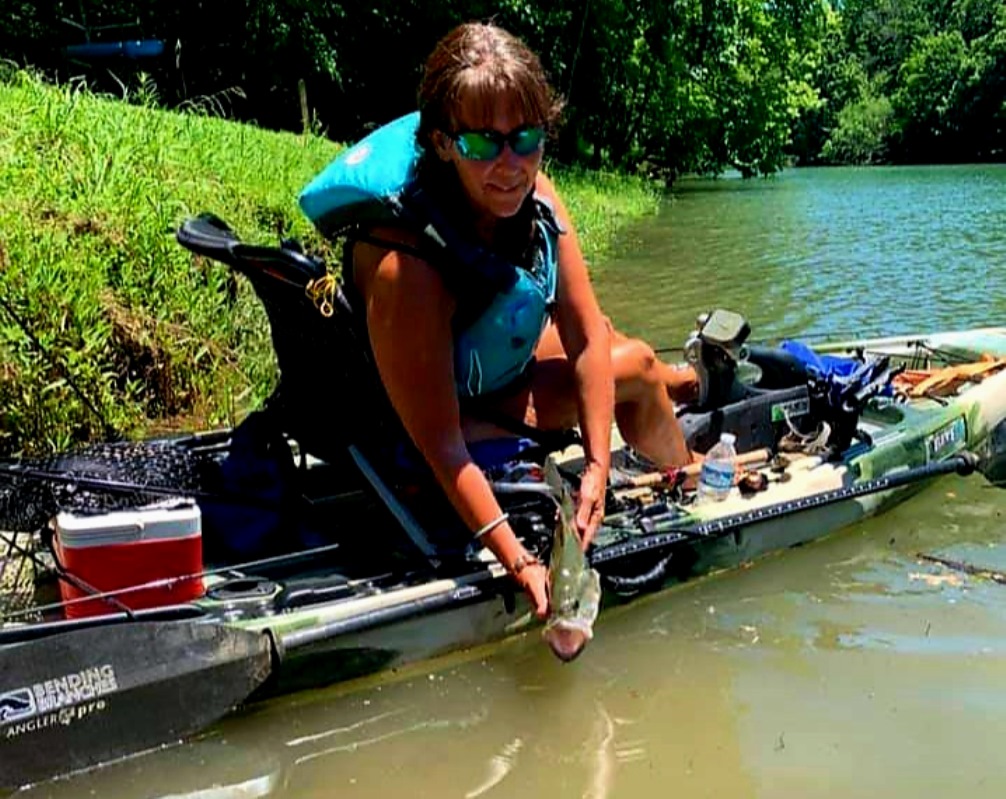 Other options include early morning launches or even fishing after daylight hours. Night fishing requires much more in terms of details to ensure safety on the water. Proper kayak navigational lighting and additional awareness of other water traffic are essential.
A lesson I learned years ago, when fishing is tough, smaller lures and slower retrieves almost always produce. A simple set up, my solution to summer fishing, finesse those fish!