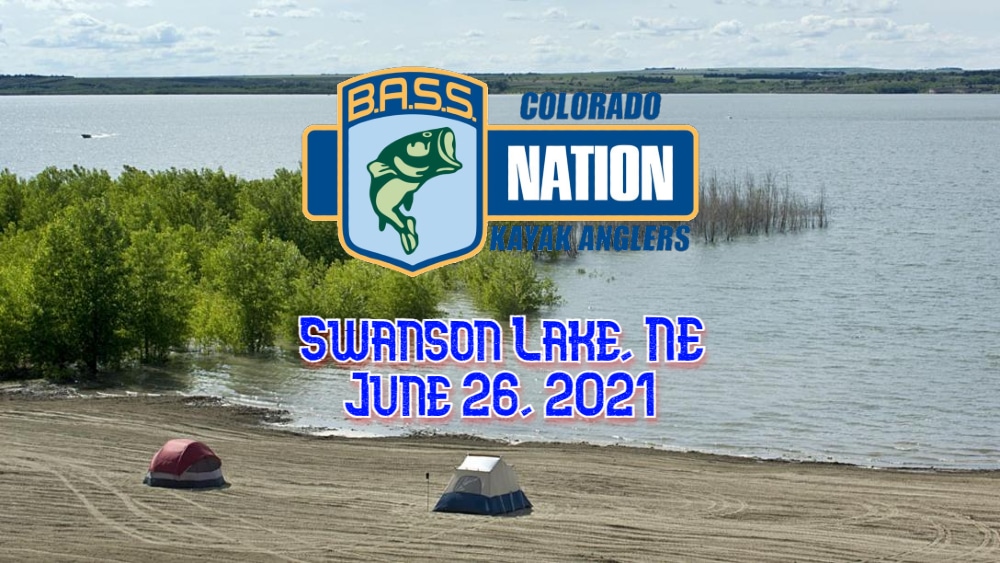 The Colorado Kayak Bassmasters (CKB) held their second tournament of the year on Lake Swanson near Trenton, Nebraska on June 26. There were only ten anglers signed up with many club members unwilling to make the trip out of state for this tournament. However, the ten-angler field was full of tremendous anglers including a few local anglers from Nebraska that would surely pose a problem to the anglers coming from out of state.

My experience began a couple days before the tournament when I made the four-hour drive in the early morning hours on Thursday. When I got to the lake, I was extremely sleep deprived, but I launched my Bigrig FD in the northeast corner of the lake to begin scouting things out. My plan was to travel west and basically do a lap around the entire lake looking for bass. This was extremely time consuming at first because there were trees, floating logs, reeds, and all kinds of cover for bass to hang around. I fished everything looking to dial in what the bass were keying in on.

I went a while without a bite until I came to an area known as Macklin Bay. When I moved back into the bay I caught three bass in quick succession throwing a chatterbait. I marked my spot and continued on to look for more areas. After this I began fishing offshore, fishing a submerged rock ledge in sixteen feet of water with a 12-inch worm. I had one bite doing this that didn’t feel much like a bass so I moved on. At this point the wind picked up and blew me off the water stranding me on the southern part of the lake. I waited for the winds to die down before I decided to skip fishing the west end of the lake and instead, I began making my way east. I didn’t get a single bite on the main lake, but then I moved into the southeast corner of the lake which is a creek called Spring Canyon. This area was full of grass, trees, and floating logs that was holding a lot of bass. I had a blast catching a lot of fish in this area throwing top water buzzbaits and frogs. I decided to call it a day after fishing this area with the intent of fishing the west end of the lake the next day.

On Friday I made my way to the west end of the lake which was full of reeds, grass, trees, and floating logs. It didn’t take long for me to begin catching fish in the area on just about everything I threw: buzzbaits, frogs, chatterbaits, texas rigs, etc. I felt like after fishing this area that my game plan come tournament day would be to fish all three areas where I found fish with most of my time being focused on the west end of the lake.

Tournament day arrived, and I immediately made my way to Macklin Bay where I started off throwing a buzzbait. On my fourth cast I hooked into a really nice largemouth that jumped off right next to my kayak as I was about to land the fish. At first, I thought the fish was about nineteen inches, but I think I exaggerated the size based on my excitement when realistically the fish was closer to eighteen. Either way, my heart sunk and this was a hard way to start the day. I rebounded, however, and caught a quick limit in the area on a chatterbait before I decided to pack it up and move to Spring Canyon.

Spring Canyon was a bit slower than in practice. I did catch a fish to help cull my limit but most of the fish I was catching were around thirteen inches and weren’t of much help. I found that if I wanted to get bit in this area that I had to get my kayak into the thick trees and throw frogs near the nastiest and thickest cover I could find. This resulted in me hooking into another really nice largemouth. The fish was in such thick vegetation that I wasn’t able to pull it out quickly enough before it got hung up on a tree and came off the hook. After fishing this area, I once again packed up my kayak and drove to the west end of the lake.

The west end of the lake wasn’t producing many fish for me, especially when compared to the day before. There were a few other anglers in the area and I thought maybe they had fished the area prior to me arriving and the fish were too pressured to bite. Once again, I found that the only way I could get a bite in the area was to get my kayak as far back into the thick vegetation as I could. I caught a few more fish throwing a frog in this area with only one fish that would make a cull in my limit. At the end of the day, I ended up with a limit of 80.75 inches.

At the weigh-in, the anglers met up and discussed what worked for them on the day. My 80.75 inches took sixth place in a close tournament with very little separation between many of the anglers. In third place was Bobby Rubek who had 82 inches and big bass of the tournament with a 21-inch largemouth. He caught his fish throwing ned rigs around standing timber. In second place was Marty Hughes with 82.75 inches. Marty had a tremendous day catching over sixty fish in a small area that he found loaded with bass. Marty caught his fish throwing neko rigs and a weightless lizard. In first place was James Strawbridge who caught his fish flipping wood with a Berkley Pit Boss. James caught a limit of 85.50 inches with a solid 19.25 inch largemouth towards the end of the day that helped him solidify his win.

I’d like to congratulate James for taking the win and really all of the top five anglers as any one of them could have come out on top in such a tight tournament! Thanks are also in order to the CKB board for putting on another great event! The next tournament is once again to be held in Nebraska at Red Willow Reservoir on Saturday July 10.