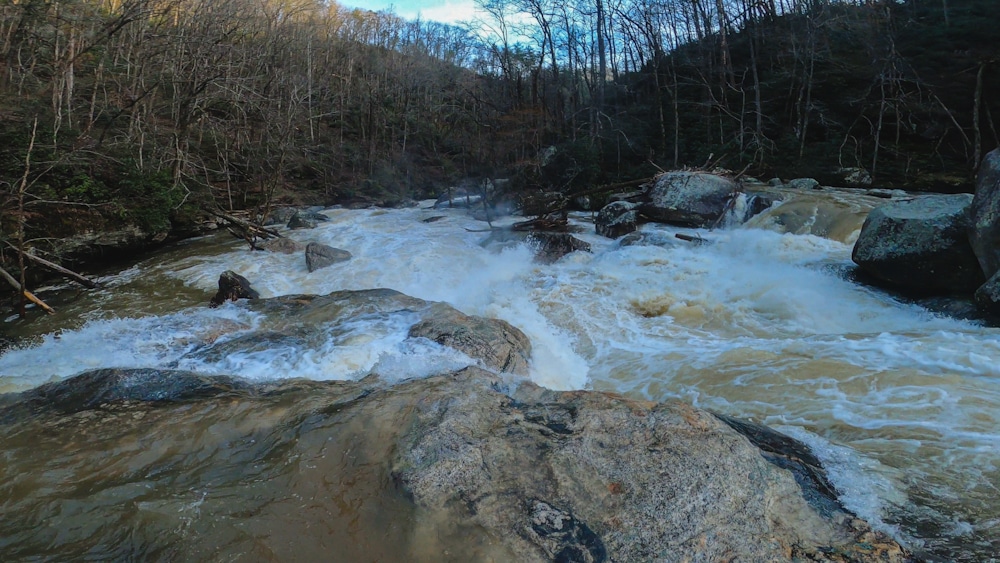 The Green River in Saluda, North Carolina is one of the most famous rivers in the world, particularly the Narrows section. Standard, 1 unit releases are about 8 inches or roughly 180 cfs which is a great run for people running class 5 runs for their first time all the way up to seasoned professionals, but sometimes 1 unit is simply not enough “juice.” Thankfully, there is a great thing called rain. With heavy rain, the Green can reach levels of up to 70 inches! In the late afternoon of March 26, 2021, a couple friends, Ben and Gibson, and I decided to tackle the beast after a couple days of rain. 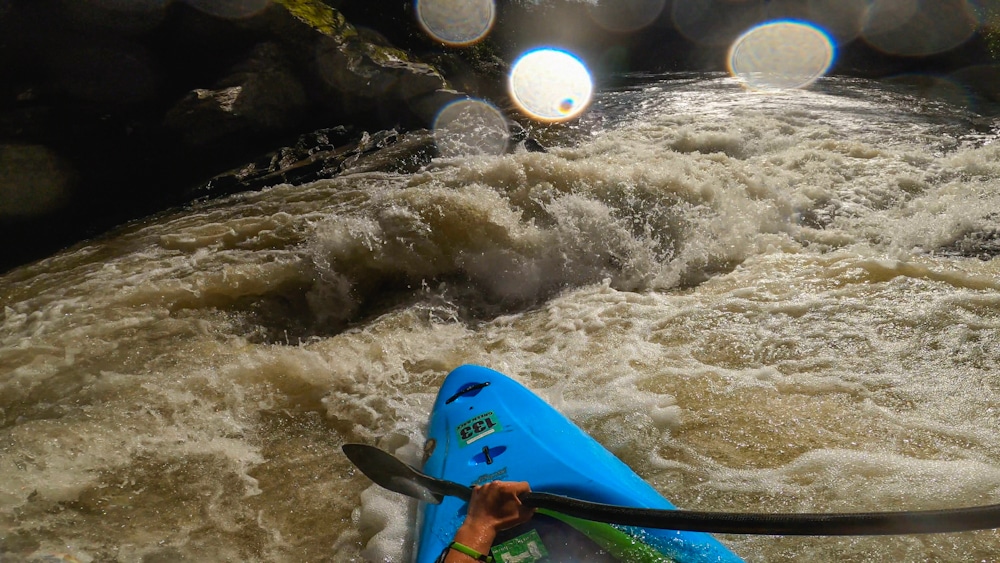 We assumed it would be somewhere between 25-50 inches, hoping for the lower end in order to paddle the entire gorge. We put in at Big Hungry, a short, tight creek that also happens to be a tributary for the Green. To be completely honest, I could have just done laps on Big Hungry all afternoon as it was one of the most fun things I have ever done: fast, hardly any stopping, and pretty large holes. It felt like Big Creek at 3 feet but, for some reason, less wood. After a grand intro, it was time to see what we were really getting ourselves into. 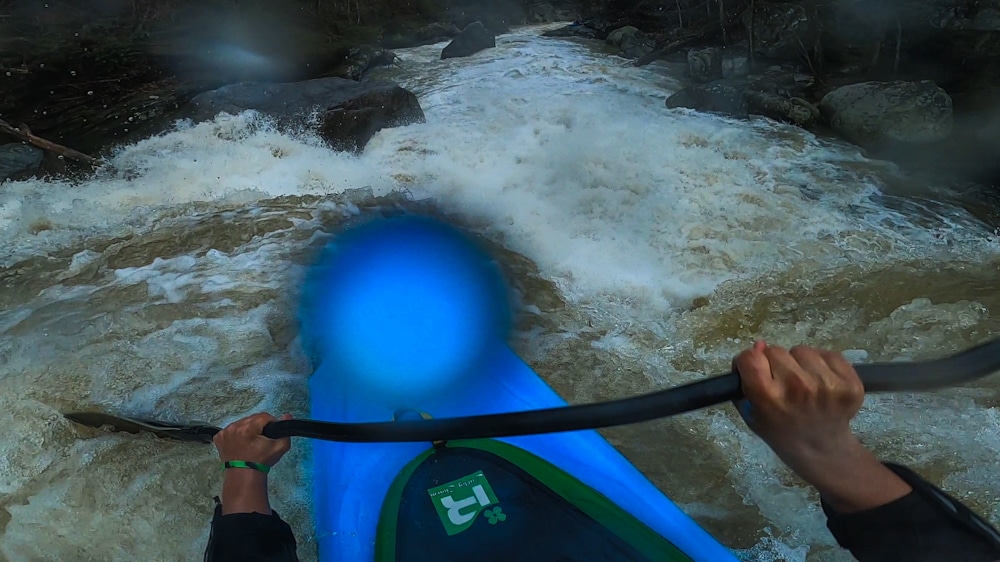 We reached the rock where the gauge stands to find no gauge. It had been buried under the water. Ben reached down and found the gauge 6 inches under the surface of the water. That gauge ends at 40 inches. The three of us laughed with a mix of nervousness and excitement. This is what we wanted. As we paddled down the upper section of the run, not even to the gorge yet, large waves (for a creek that usually runs at 180 cfs) and holes were everywhere. We spent little time playing though as we had only a couple hours of light, and we had a feeling there would be a lot of walking downstream. 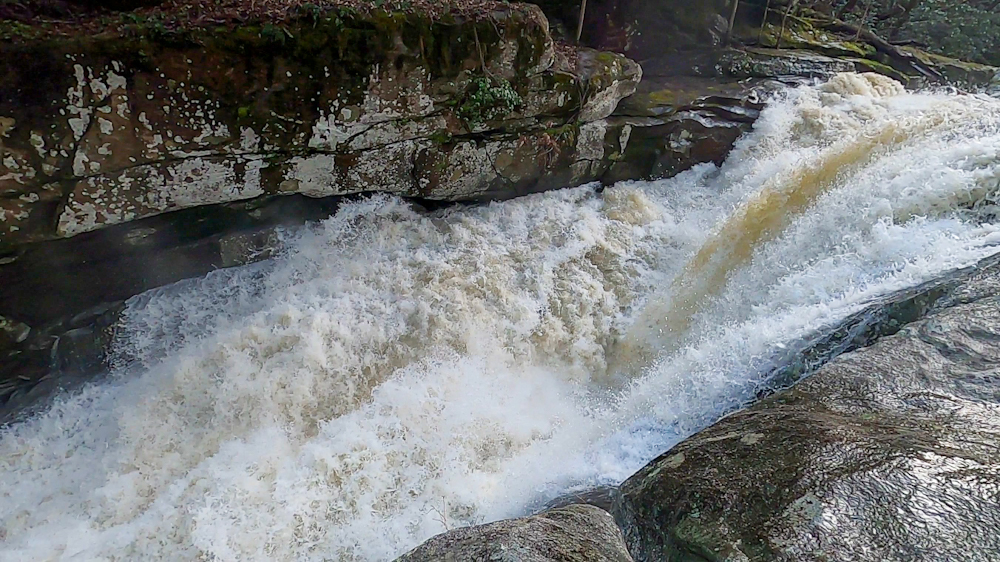 The first rapid, Bride of Frankenstein, went from being a moon boof into a slot to being a giant Hawaii five-O wave. This then put us right above Frankenstein which no longer looked like the narrow, S-turn rapid that it’s known to be. It was now a boily, holy mess. We made the quick decision to just pin it straight down the middle, attempting to boof off a rock that usually stood way over head. What followed was a crazy fun section of fast, squirrelly water with big waves and holes that towered over your head. We eddied out in an eddy swirling with whirlpools almost able to suck down my medium Nirvana.

The next rapid, Pincushion looked fairly benign, but a tree had gotten stuck in the main channel where we couldn’t see. Luckily, we were able to boof right over it and grind across it, but it was a great reminder that we always have to be on the lookout for new hazards such as this. 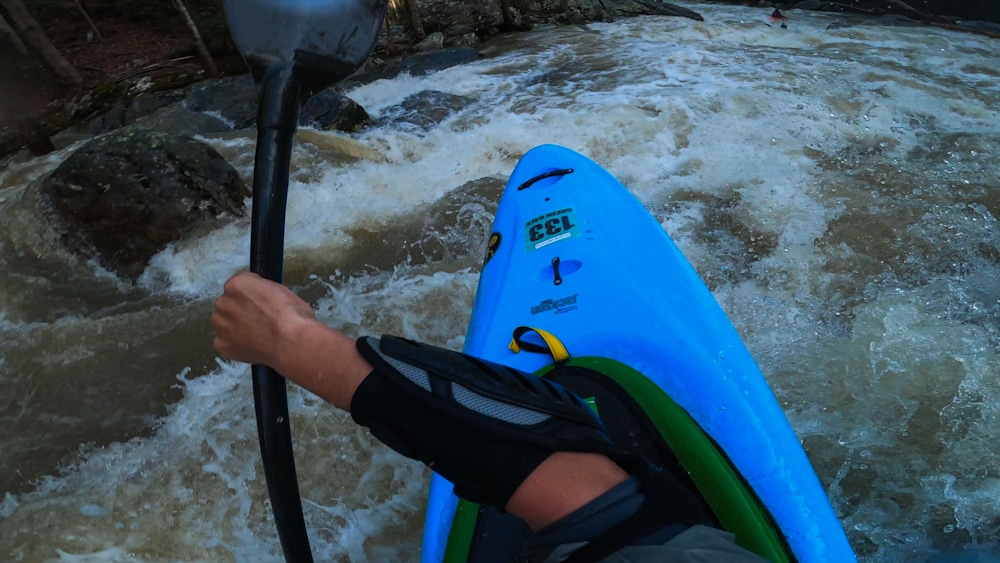 We cruised on down to below whale tail and decided to hike along the river. We didn’t want to take any chances getting stuck in a bad situation with only three paddlers and limited daylight remaining. While looking at the middle gorge, we were able to find lines through most of the rapids, but each rapid routed straight into the next without a pause. We knew we had the skills to paddle most of the rapids, but it certainly wasn’t the smartest idea. We walked the rest of the gorge until Sunshine where Ben and I decided it was good to go. May I just say that Sunshine at 46 inches is quite possibly one of the most fun rapids ever, and at that level, there is no back-breaker rock to hit! The runout was back to class IV (SE) big water with kick flips, wave wheels, and surfing. We did end up walking toilet bowl and hammer factor because they were absolutely HUGE.

The moral of the story is be adventurous and try your local runs at super high water when everyone else is looking for the things that only run with rain. We did have to hike more than we kayaked, but for what we did paddle, it was completely worth it. Just be wary of new hazards whether it be massive holes, no eddies, moved rocks, and/or wood. Water is unpredictable, but it sure as hell is fun!