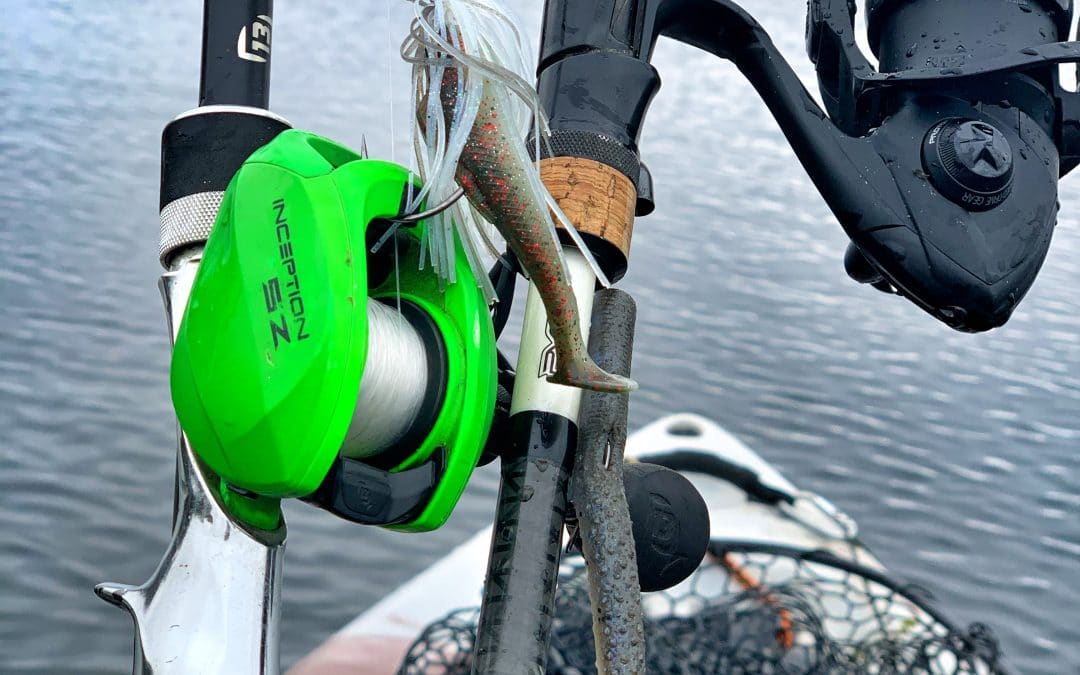 The first stop of the Hobie Bass Open Series for 2021 was Lake Seminole out of Bainbridge Georgia. Major cold front conditions as well as high water was the dominate challenges that the anglers faced in event. In the weeks leading up to this event a warming trend had the bass starting to move up and feed for the coming spawn. water temps the week leading up to the event had reports of water temperatures nearing the 60 degree mark. That all changed with a major cold front and precipitation that dropped the water temperatures back into the lower 50s and had the Florida stain bass tight lipped for most anglers prefishing the week of the event.

I had struggled to locate a solid pattern early in the week in targeting current in Spring Creek, the Flint river arm as well as the backwater sloughs of the Chattahoochee river. I was able to locate a few bites in the flooded timber and current of the Spring creek arm targeting the back side of current breaks where the high water was flooding through bends in the river and joining back up to the normal river channels. This pattern was very dependent on water level which was forecasting to rise on tournament day. In order to reach the productive area on this river I needed to float nearly 5 miles of unproductive water to reach the area that produced bites. 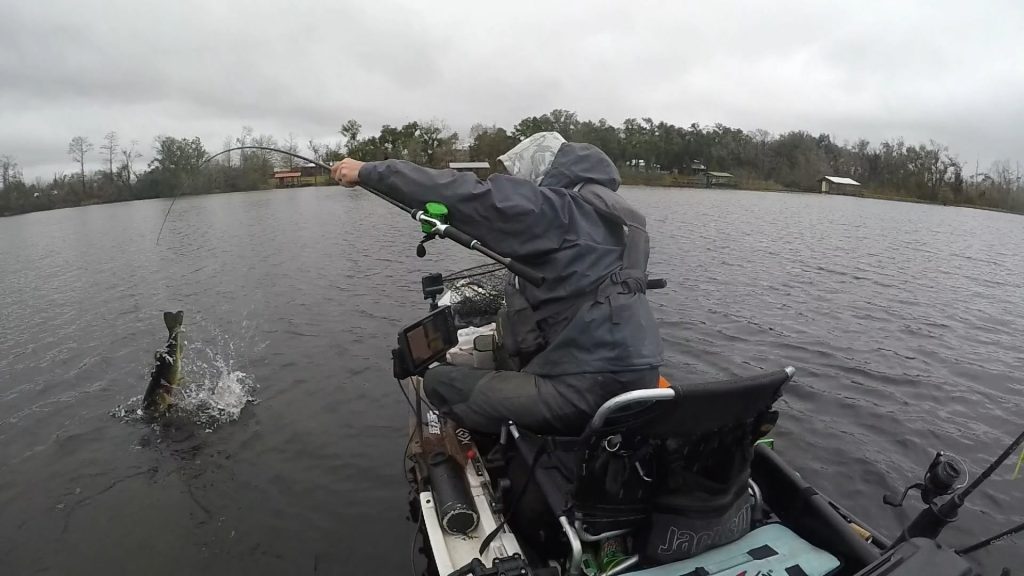 I was having success throwing a 3/8 0z Zman Jackhammer chatterbait in the Golden Shiner color with a Zman Swimmerz trailer in Redbone color. Casting accuracy was a key in getting the bites as the bass were holding very tight to cover in the small current seams created from the flooded water running through the trees. Casting upstream and banging the chatterbait into the trees as it entered the eddy produced bites and good quality size. This area was however ruled out on tournament morning as the water level came up over 2 feet from my prefishing day. My plan B was an area which I had success the previous year during this same event. This area had the warmest water that I had found as well as some of the best looking grass that I had found all week. My first day of prefishing my partner and I went to this area and found that the bass were still there and we were able to quickly put a few keeper fish in the kayak. 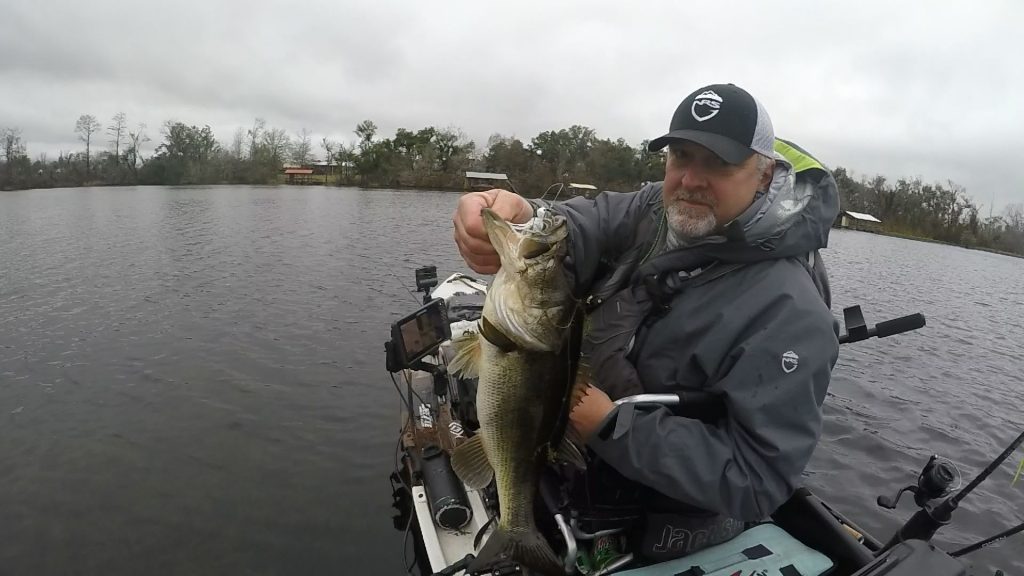 I hadn’t found the size that my river pattern had produced but with the bite being as tough as it was all week I felt that a limit could be caught in this area for two days putting me in a position to cash a check and score some valuable Angler Of the Year points. Day one of the tournament I made may way to the back of the grassy area along with 6 other competitors who had found the same thing. I opted for a spot off the edge of a deep depression on the windy side of the bay and dropped my Anchor Wizard down in an area of sparse grass just outside of the thicker grass and waited for lines in. My first two keepers came quickly on a dropshot using a Zman Long Shotz bait in Hot Snakes color with a 1/4 oz FISHingOnline Tungsten dropshot weight. After about an hour in that same spot I pulled up the anchor and began searching the perimeter of the grass edge with a Texas rigged Zman Big TRD with a 1/4 oz Tungsten FISHingOnline bullet weight rigged on a Mustad Grip pin light wire 2/0 hook. It didn’t take long to then fill out my limit and begin culling out a few smaller fish to get me to 80 inches and 30th place after day one. 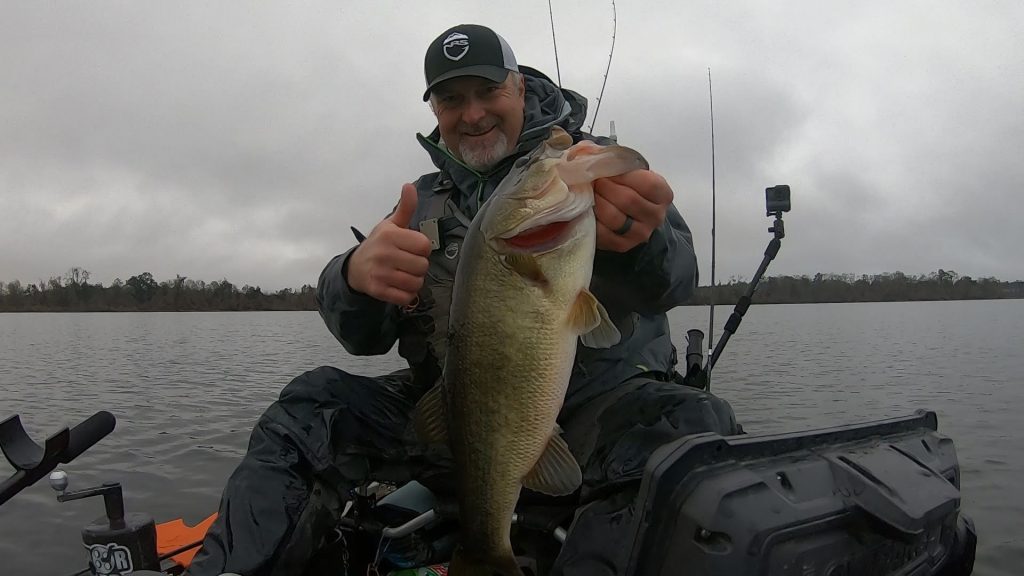 Day 2 found me back in the same area with only 3 other anglers this time. I went right back to the same drop pin on my Lowrance mapping and started the day out with back to back 18 inch fish on the Texas Rigged Big TRD. the morning went on and I quickly realized that the fish had moved and my grass edge bite was not producing like the day before. The wind had picked up drastically which make the finesse presentation difficult. I was cold and getting no bites so I decided to grab my Zman Jackhammer and begin moving into the shallower grass area and try to figure out where my fish had moved to. It didn’t take long as I began fan casting across the grass I was quickly rewarded with a 21 inch bass that came out of a small hole in the grass to inhale my jackhammer. Two casts later in the same area and I was rewarded with yet another 20 inch bass followed shortly by my 5th good fish of the day giving me a solid 95 inches by noon on the final day of the event. I continued throwing the Jackhammer the rest of the day but was never able to upgrade from my first 5 fish of the day.

I was able to finish the event in 7th place out of 175 bringing home 1300 dollars and some valuable AOY points for the year. 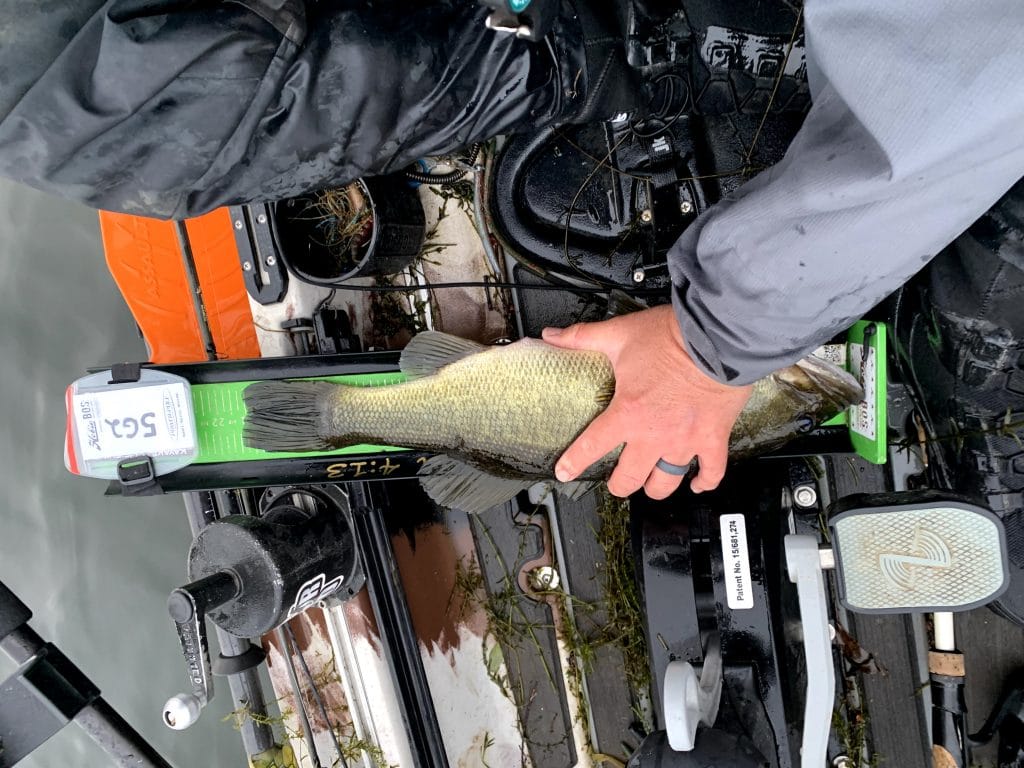