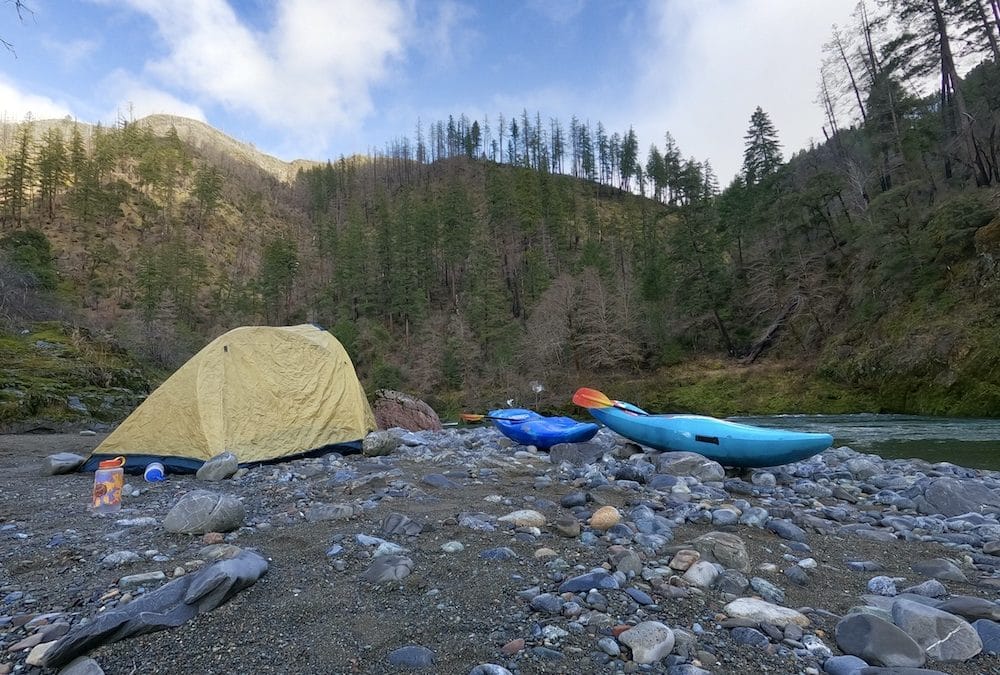 Contrary to what the name might suggest, the Illinois River (at least this one) is not in the midwest. Rather, it flows through southern Oregon’s expansive Rogue River-Siskiyou National Forest. The put-in at Miami Bar (Google maps was as confused by all these out-of-state names as we were) was a mere five hours from home; the Oak Flats takeout, only six. Hungry for a deviation from our typical weekend in White Salmon, 11 hours total drive time seemed more than worth it for a two-day, one-night river trip with more than 30 miles of pristine, remote whitewater. There was, however, a catch. As the most convenient shuttle route was snowed in, we were left with two options: pay a shuttle service $350 to pick us up, or drive the additional 151 mountainous miles ourselves… 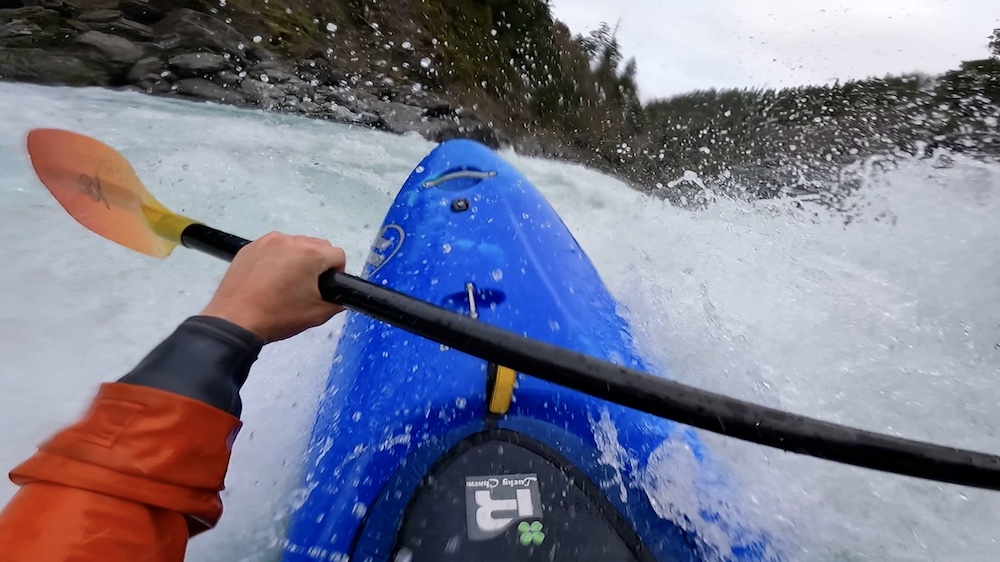 Noah and I left for the takeout just after 6am on Friday, adding only a half hour to what we’d anticipated would be the first six hours of our journey. Despite the snow we’d driven through in the mountains around Oak Flats, we were confident that we’d be comfortable on the river. Leaving my car behind, we pointed Noah’s truck first towards the coast, then south into California, northeast to Selma, OR, and finally west down Illinois River Road. We stopped in Selma in search of a self-issue permit required to run the Illinois. After finding none and calling the ranger, we learned that permits had been discontinued at the beginning of the COVID pandemic; we were good to go. We sent our last text message check-ins, looked at the level one more time, and turned down the unassuming residential road towards the put-in. The last 10 miles took us an hour. 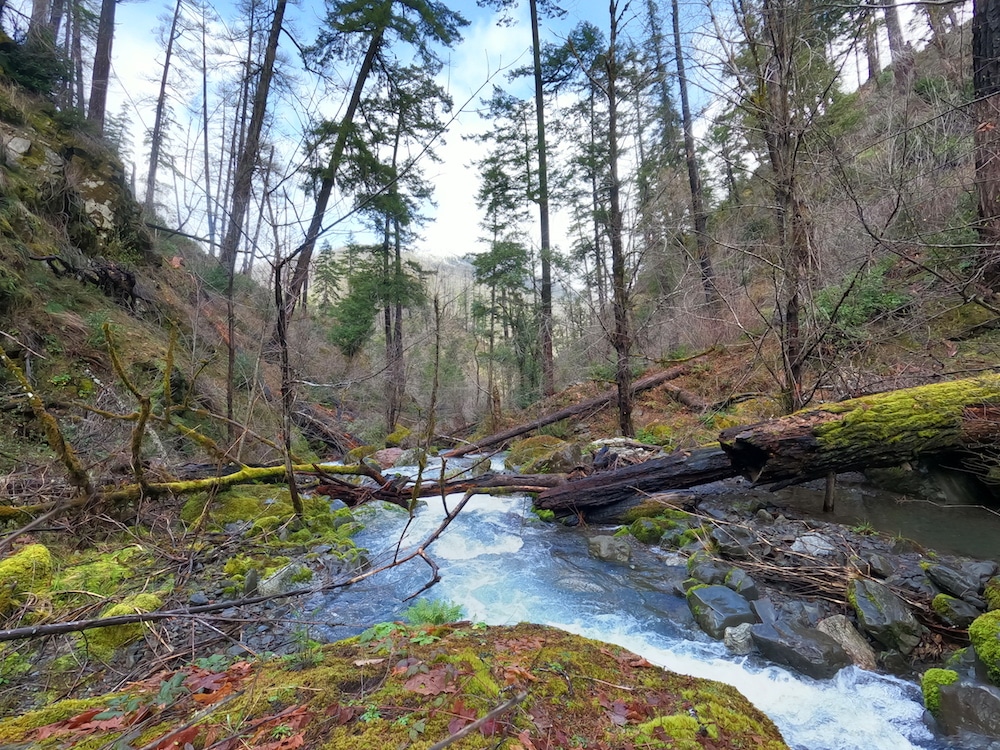 Upon our arrival at Miami Bar, we ran into Judy, a sweet lady in her 60’s, the only person I’ve met bold enough to attempt a u-turn on an 8-foot-wide dirt road in a 25-foot sprinter van. It took us 20 minutes or so to tow Judy from her precarious perch (back wheels suspended in a ditch on the right, front wheels scrambling for grip on loose gravel a foot or so from a cliff edge on the left). We spent the remainder of the night double, triple, and (knowing ourselves) quadruple checking our gear list before turning in early. We knew there were at least 2 other groups on the water and we hoped to get an early enough start to beat them to our proposed camp site the following afternoon. 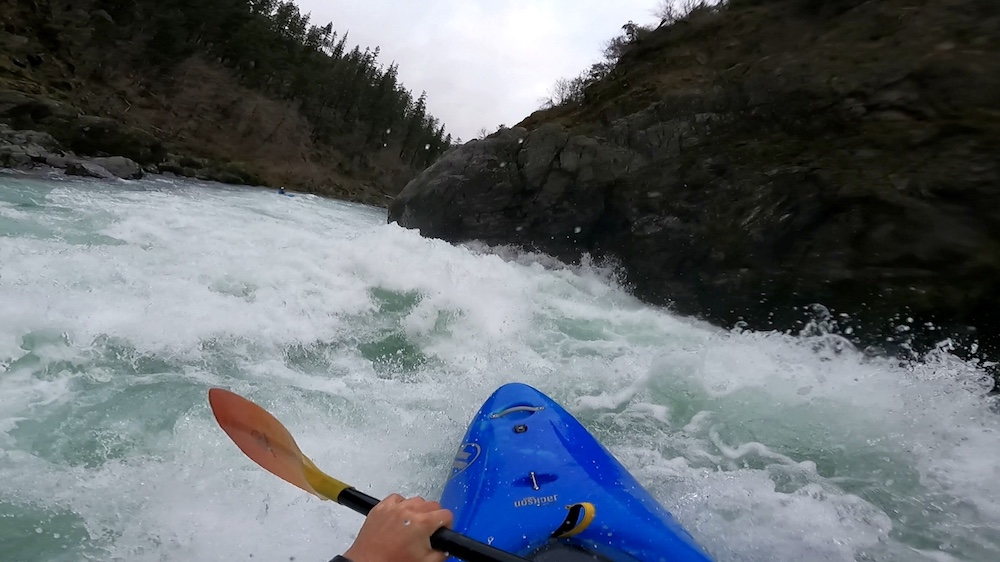 We woke up on Saturday just as the sun was rising and immediately began final preparations. Breakfast consisted of two packets of instant oatmeal and some coffee. With the truck locked, dry bags filled and stuffed into our kayaks, we mosied down to the waterline. We passed Judy who took our picture and wished us safe travels (she ended up camping next to us as, to use her own words, she “wasn’t quite sure what [she was] doing”). Noah was first in the water, grinning ear to ear for no particular reason other than the sheer excitement of adventure. I glanced at my watch and followed close behind. Put-in time: 8:37am. 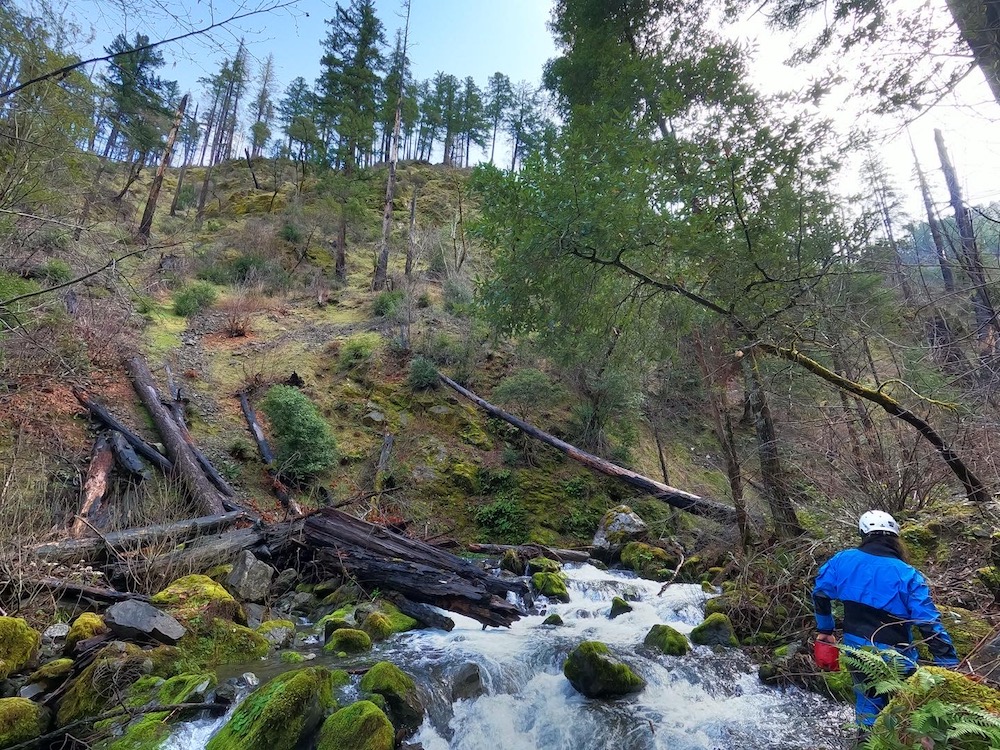 Day one of the Illinois starts off slow with about 3 miles of glassy wave trains and astonishingly blue pools. Noah and I set a calm but consistent pace and continued downstream, soaking in the already awe-inspiring beauty of the Oregon wilderness. We tried for a bit to put into words the simultaneous angst and comfort of knowing that everything we needed for the next two days was, for better or worse, right there with us in our boats. The action slowly picked up and soon enough we were enjoying some of the finest whitewater in the state.

Wide boulder gardens were punctuated by sizable pour-overs. Deep gorges featured ledge drops and mesmerizing boils. The Illinois had a distinct big-water feel which provided a noticeable contrast to many of the other rivers and creeks in the area. With countless lines through every rapid, we were having the time of our lives just bopping through the woods. The “charge for the biggest horizon line you see and put your faith in the weight of your loaded boat” mentality was working like a charm. Of course, on occasion, Noah and I each found ourselves dropping into holes which were bigger than anticipated. So goes the game of read and run class IV. 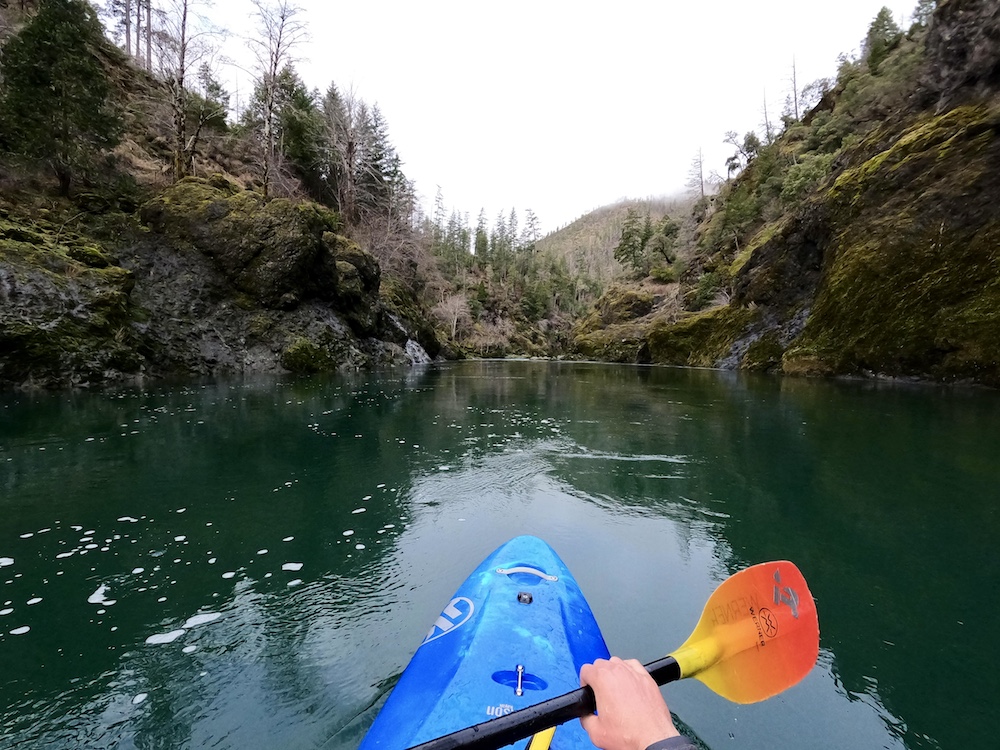 We were thoroughly enjoying every bit of our surroundings, from the rapids in front of us to the misty hills and snowy mountains above. More tributaries than I could count cascaded into the Illinois from both banks, most of them finishing with some sort of spectacular falls. We passed two other groups Saturday morning, both consisting of kayakers, both still tearing down camp and gearing up for the day. This was great news for us, we’d get our first choice of camp sites downstream. We didn’t think to look at a clock, we were soaking the day in and couldn’t care less about what time we rolled into camp.

Noah and I had figured it should take us no more than four hours to complete the 16 or so miles we planned to paddle on day one. Four miles per hour on average seemed a bit on the slow side, but we weren’t hustling, and we wanted to take our time getting the full Illinois experience. We found ourselves rolling into South Bend, our camp for the night, earlier than expected. The sun was still noticeably on it’s *ascending* morning trajectory. I pulled out my watch and glanced at the time: 11:29am, time to camp: 2h 52m. Time flies I suppose…

As it had been drizzling on and off most of the morning, we took advantage of a patch of sunshine, pitching our tent on a sandy beach and cooking lunch before the rain inevitably returned. We dedicated the rest of our day to exploring as much of the immediate area as possible. Our campsite was jaw dropping. We were set up on a sandy beach on river right, directly across from the most unapologetically green cliff face I’ve ever seen. Upstream on our side were a series of 10-30 foot cliffs jutting out over a sequence of captivating electric blue boils and eddylines. Noah and I ferried across the river to a creek that tumbled down the side of the cliff in breathtaking fashion. We spent a few hours hiking up and down the creek bed, hopping across massive granite slabs, and delighting in the simple sense of being absolutely *out there*. The temperature dropped notably as the sun dipped behind the surrounding hills. We boiled some water for our MountianHouse dinners and crawled into the tent, eager for day two. 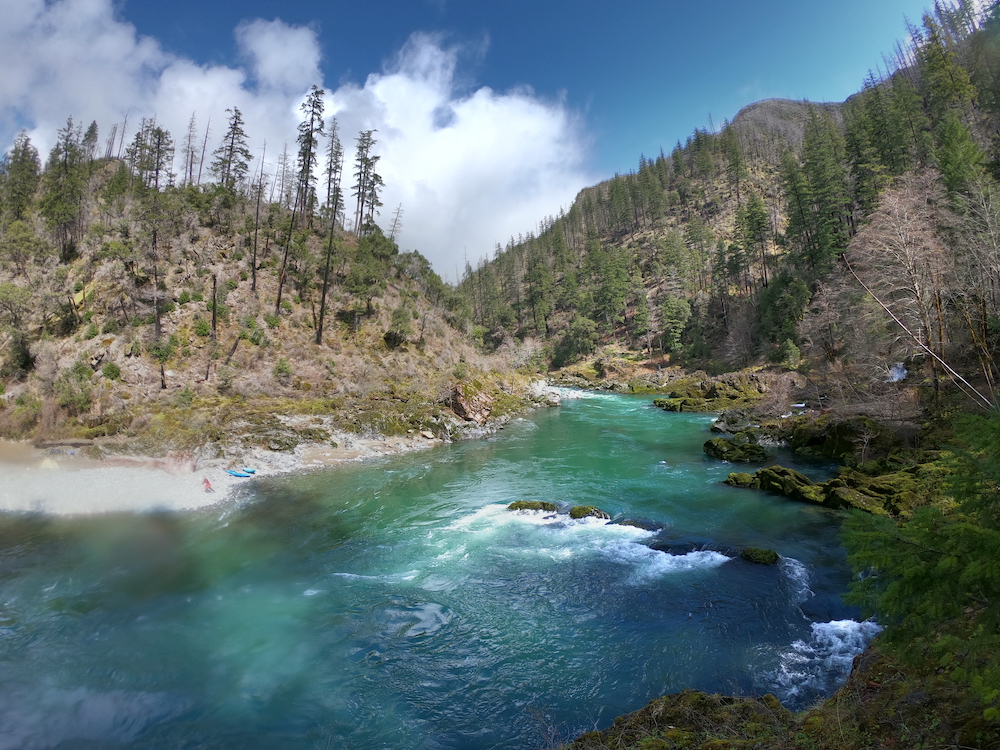 Staring down another 10 hours in the car, and with work looming early Monday morning, we hoped to hustle a bit more on Sunday. We woke up early, slammed some Cliff Bars, and loaded everything back into our kayaks. We pushed into the water at 8:07am, taking a long final survey of the river’s southernmost canyon and the cathartic beauty therein. Paddling downstream, we quickly made it to Greenwall, the crux rapid of both days on the Illinois. We hoped to save time by boat scouting the drop and rallying straight through, a plan that quickly unravelled when we laid eyes on the first horizon line. Fortunately, an eddy on river left provided the perfect place to hop out and peak over the intimidating ledge. We took one look down the gorge and agreed simultaneously, “down the left.” Back in our boats, we snuck the first ledge in Greenwall on the left before moving back center for a series of crashing laterals. Just about the best way I can think of to start the morning.

After Greenwall, the river starts to mellow with a handful of fun, I mean really fun, boulder gardens. Surf waves, big boofs, deep gorges, no matter how far we pushed there was something to enjoy around every corner. About six miles into our second day, the whitewater calmed to a handful of class II wavetrains separated by long sections of flatwater. As the rapids dwindled, however, the scenery abounded. It seemed each corridor was more stunning than the last. Every bend in the river revealed another canyon, more braided waterfalls, deeper forest, the type of scenery that makes you want to pinch yourself just to check.

We kept up a consistent pace through all the flatwater, aiming for no later than noon at the takeout. Boogying, but not charging, we convinced ourselves that we must be getting close despite the sun still hanging low in the sky. The last corner came as a bit of a surprise. The first gravel bar we’d seen since putting on came creeping into view. Even after only 2 days, my little blue Honda seemed out of place against the deep green Rogue-Siskiyou backdrop. We floated down the last riffle, passing a couple of viable eddies. “Should we get out?” Noah asked. Part of me wanted to say no. Actually most of me wanted to say no. I wanted to just stay in the river, in the forest, in the retreat of this wilderness that we’d come to love, maybe need, so much.

Reluctantly, we pulled into the last eddy on river right and checked the clock: 10:29am; time to takeout: 2h 22m. We dragged our boats a couple hundred yards to the car and loaded up. Boats on racks, gear in the back, we climbed in and began the second four-hour shuttle of our weekend, first towards the coast, south to California, back up to Oregon and, finally, down Illinois River Road. We got Noah’s truck and were relieved to find that Judy had somehow found her way out with no further assistance (at least not from us). From Miami Bar it took us about five hours to get back to Bend, a grand total of (for those keeping track at home) 19h 30m drive time and 5h 14m paddling time. Perhaps not the ratio you’d expect, but all that time at the wheel afforded me plenty of opportunity to reflect and reanalyze the worthiness of our weekend rally. It simply could not have been more worth it.