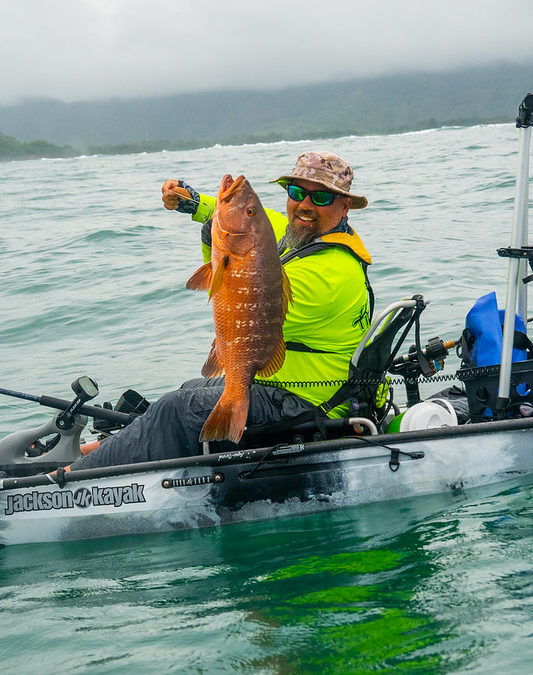 When I stepped into that Panamanian surf, I had no idea what was in store for
me. I had fished the salt before but never surf launched and never fished the deep
blue. All I knew was that just about every possible species I could catch would be
new to me and I was a solid mix of excitement and trepidation. Everyone talks
about the “slam” of the big three; roosterfish, yellowfin tuna and the cubera
snapper when they go. I would have been tickled pink with any one of the three!
The team had run way up the coast hauling our Coosa FDs in Pangas and launched
into seas that were way too high for this bass fisherman’s comfort zone. While I
was getting my gear situated a Panamanian fisherman came by trolling a hand
line out behind his boat and a few hundred yards out I saw him wrestle what
looked to be a tuna over the gunnel then start back trolling. I headed towards the
spot where he had his catch with hopes that a school would be in the area and
soon had a blue mackerel Yo Zuri minnow lure swimming behind my kayak. 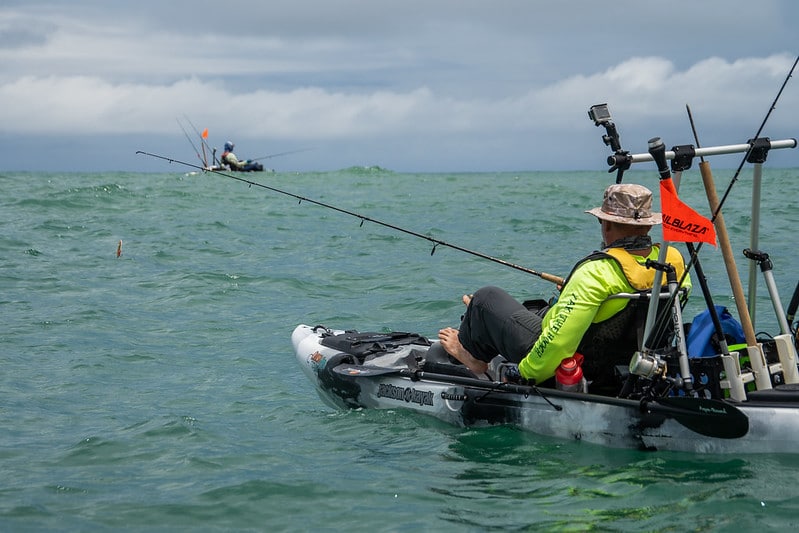 I had gone a short distance when the rod slammed against my chest and the drag
started screaming. I radioed the team that I had a fish on and turned the boat to
fight it head on. After a few minutes I could see color and the shape of a tuna
circling under the boat and soon I could make out the yellow finlets that told me
the species! I wanted this one badly since I had never caught a tuna before and as
the support boat showed up, I put the spear gaff to work. I don’t know exactly
what happened after that, but I am pretty sure the crew had never seen someone
so excited over a small tuna before. I tend to overact when I catch a brand-new
species and I hope I never change that reaction. 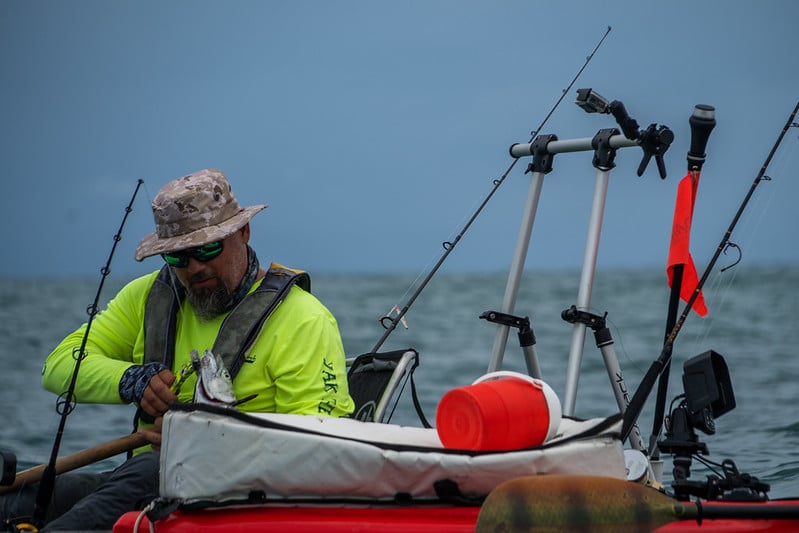 After a week of floating, trolling, jigging and photographing; I had caught 19
species of fish and 13 were new to me but I had yet to catch a rooster or cubera. I
had texted my bride the day before to tell her we were going into the last day and
I still hadn’t caught the other two targets, but I was fine with that. It had been an
incredible adventure and I was in no way disappointed. There had been several
roosters caught, and a couple cuberas, I just wasn’t in the right spot at the right
time. She responded, “maybe it’s your day; have the best day ever!” 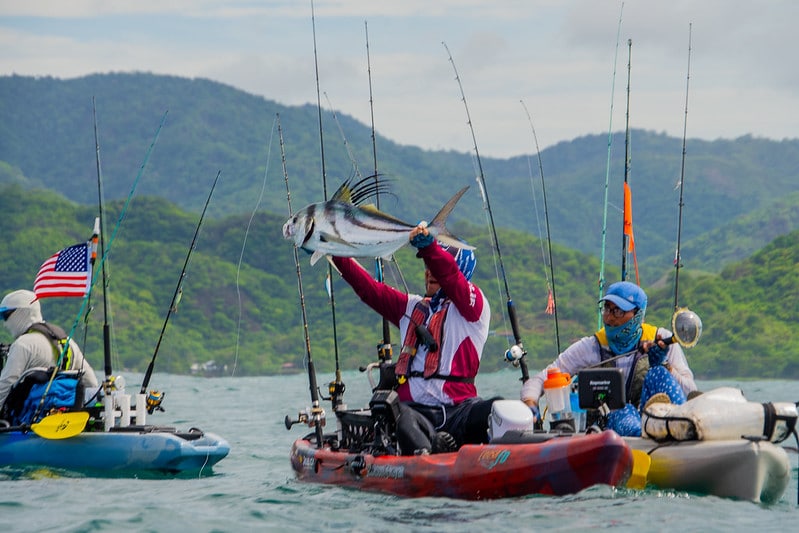 Roosters were popping up right and left and the team was burning up the radio
with calls of being hooked up. Our guide Adam came by to check on me and hand
me a fresh blue runner he had just caught. After rigging it up he told me to pedal
for a 15 count while letting it out behind the boat. After dropping the bait, it was only a few minutes before my clicker when off. I had a sore arm from a false alarm caused by an 8ft long shark the day before, so I was a little hesitant to lock down the drag, but I did. The heavy rod bowed over, and the fight began! This
one was not as strong as the shark, but I could not see the fish yet. After a short
tug of war, I saw a silver flash below the boat, and it had a rooster comb! I
couldn’t believe my eyes at how beautiful this fish was. When I finally got my
hands on it, I crowed like a mad man. I am pretty sure most of the pacific coast
heard me. 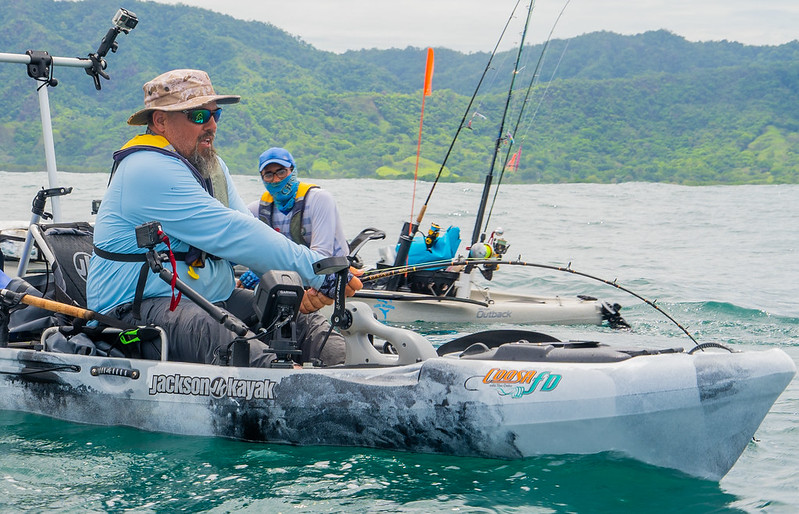 I was floating in one of the most beautiful places I had ever fished and processing
all the events of the week when my fish finder lit up with a stack of fish just off
the bottom. I put my big rod in the holder and grabbed a slab spoon to drop down
on the marks. The spoon hadn’t made it down very far when the clicker screamed
on the rod in the holder. This fish was dogging and running so hard I had trouble
getting the rod up out of the holder! After a couple drag bursts, I had the fish
away from the rocks. Straining my eyes to see any glimpse of color I thought I
could possibly see red. I held my breath until I saw the big canine teeth and I
yelled out CUBERA!!!! I could not believe it, here I was on the last hour of the last
day and holding one of the most coveted species of the area and a completed
Panamanian slam. This was a trip that will forever live on in my stories and
memories. I was truthfully blessed with the entire experience and with the crew
of friends I got to share it with. 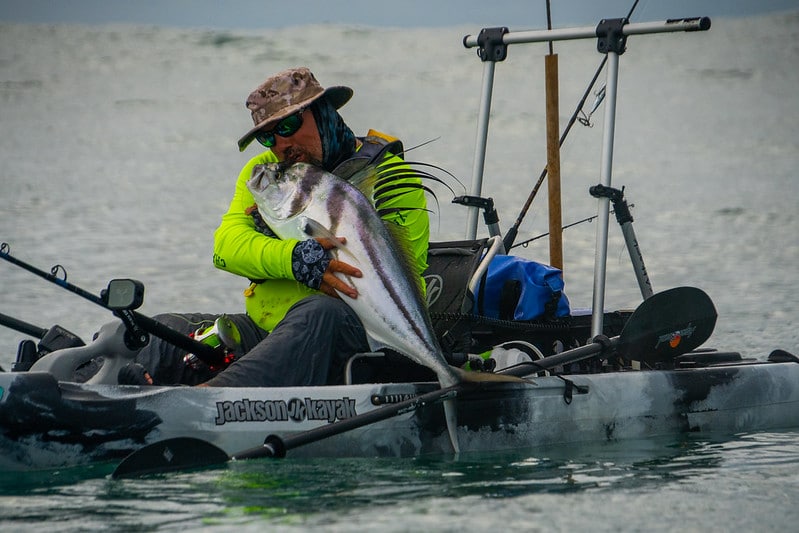