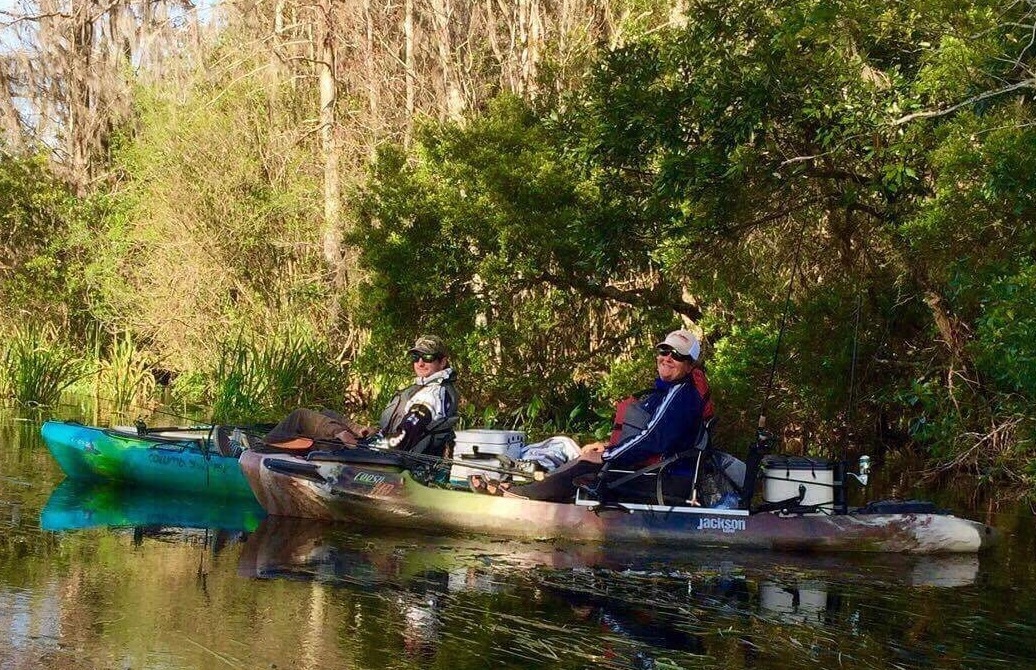 It was gearing up to be a great outdoor weekend of camping and kayak fishing for big bass with a friend on my backyard waters in the panhandle of Florida. Trophy sized catches were what we hopefully anticipated. Little did we know that our dreams would be realized and wonderful lifetime memories ingrained.

I had spent Friday helping my local kayak dealer/outfitter wash and load kayaks to bring down to the river for their demo day on Saturday. My fishing buddy, Travis, was driving after work to the area to do some night fishing and camping overnight before meeting up to help with the demo day. We were both representing Jackson Kayak at the demo and we had a great time talking to folks about kayaking, fishing and about enjoying being on the water in whatever kind of adventure they could imagine. We accompanied them on their test drives on the beautiful, springfed and tidal Wakulla River where manatees often cruise by, swimming under and alongside your kayak, providing jaw-dropping thrills! 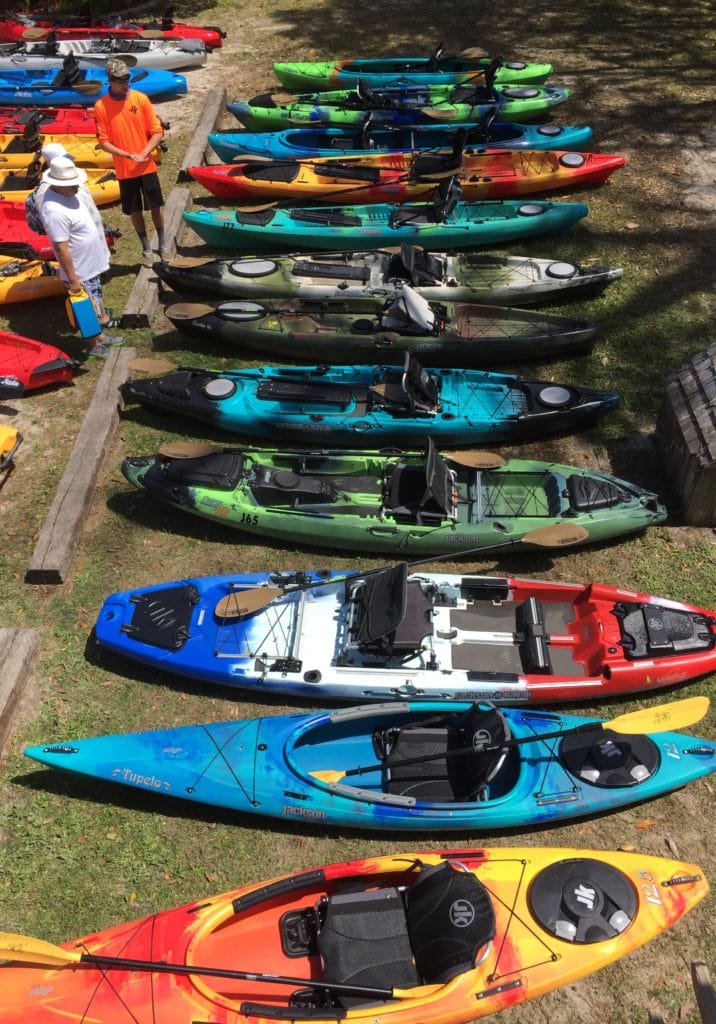 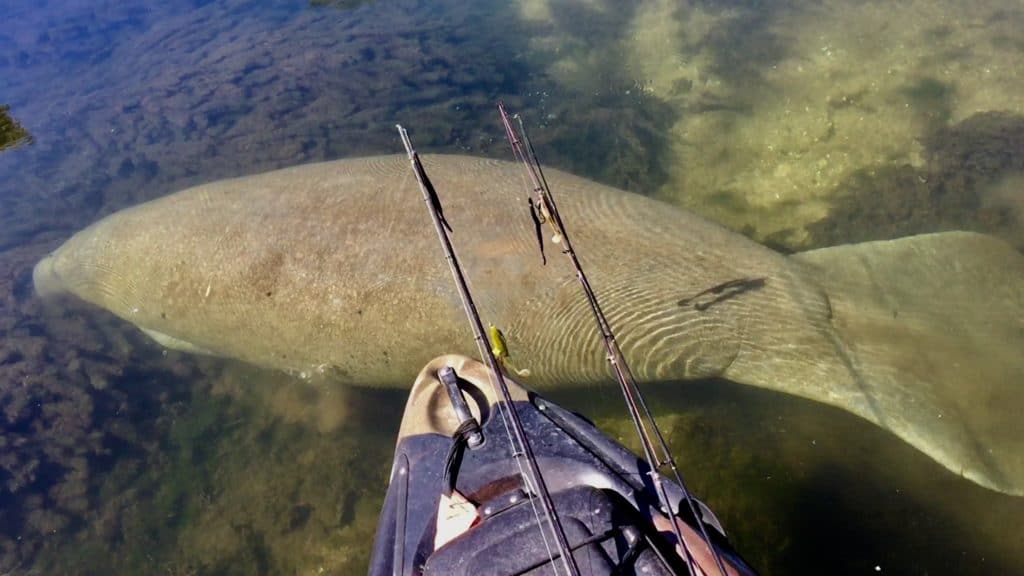 Later that afternoon Travis and I then headed to our fishing destination to begin our hunt for some big bass. We were both competing in a season-long online catch-photo-release tournament and already had some nice submissions under our belts.
Travis had recently moved to Florida from Ohio where he spent many wonderful days fishing numerous rivers for bass, especially his beloved smallmouth. But the very big largemouth down south were the target species now. It was my hope that this weekend’s foray would be a stellar one for my friend. I have had the great fortune to catch some very large bass in the past few years and even some true double digit monsters on the river. We were hopeful that this would be another chance to possibly catch one of those giant river mamas. My opportunities to fish here are frequent. He gets a chance only on the weekends. We were both wishing that this day would be Travis’ turn to score a giant. 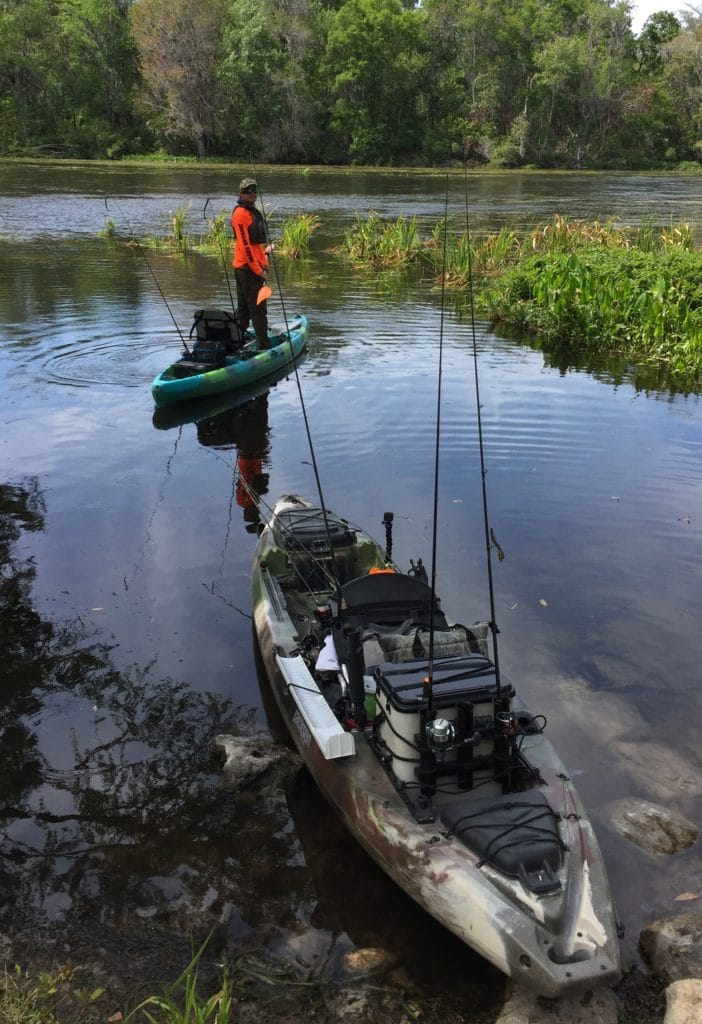 We launched my Coosa HD and his Cruise into a fairly stiff south wind which helped to push us upstream and set up a nice drift as we threw paddle tails and buzzing worms and other soft plastics.

Other than a few deeper areas, this was a mostly shallow springfed river full of eel grass, stands of wild rice and other vegetation, lined by cypress and hardwood forests. Very wild and very beautiful.
With bluebird sky/high pressure conditions, the fishing wasn’t terribly active but we were catching gorgeous Suwannee bass that are only found in a few rivers in this area. Suwannees are small but mighty and are aggressive feeders. These striking little dynamos, that rarely get larger than 14 inches, are such fun to catch! 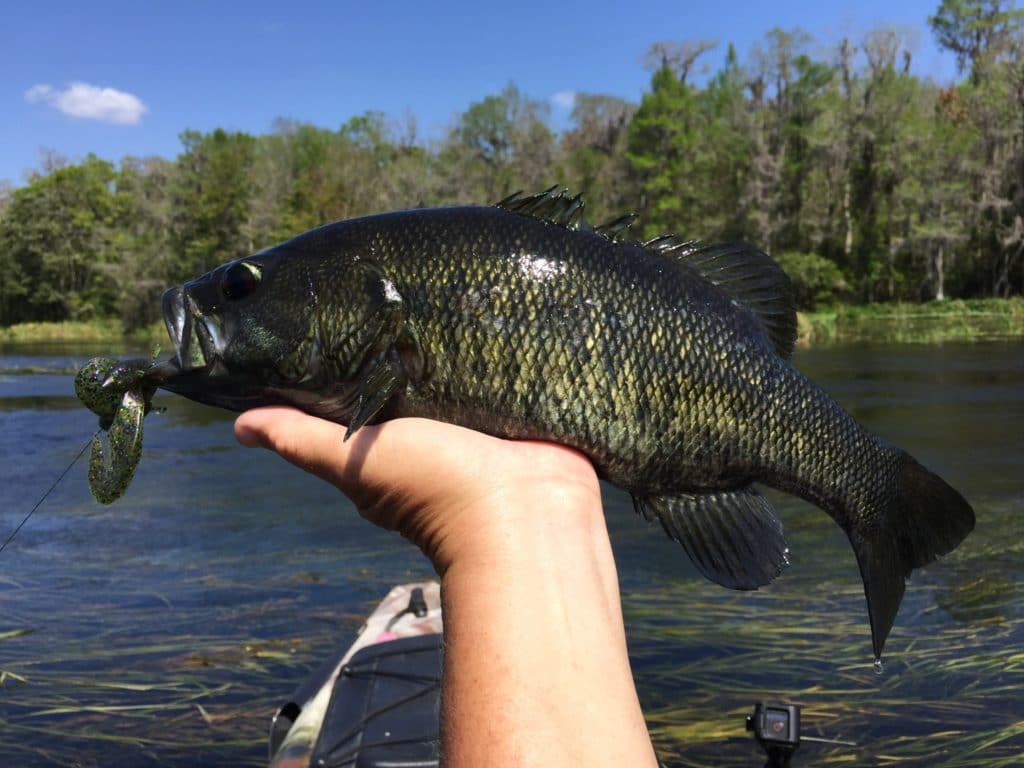 We were on the hunt for the even rarer and elusive oversized largemouth monsters, ones that I previously thought could only be found in lakes. For the past few years I’ve caught bass up to eight pounds on the river but within the last year I’ve been astonished by some super-sized lunker catches.
There were the two eleven pounders that had my head spinning! I had no idea that this river held such giants and didn’t think those two could be topped, but a year later I caught my personal best. She was a fifteen pound fish-of-a-lifetime largemouth river monster! My personal best, caught and released from my kayak, and astonishing in every way!

These giant bass could be anywhere. We tried to leave no stone unturned as we made our way methodically up the river. A few bass were caught but just not a lot of size. In between catches we pondered over whether the bass were still on beds or just using the cleared areas and depressions for good ambush sites. Our leisurely pace made for close observation of these spots often hidden by the undulating grasses.

As the shadows got longer we drifted farther apart. Just as I started to think that another precious fishing day would pass without much luck I heard a plaintive and urgent cry of, “Jean!”, from around the bend! I paddled hopefully and furiously and found Travis with his rod bent, reaching down into a tangle of eel grass. He pulled out the most beautiful sight to behold! It was a big fat river largemouth! His personal best at 24.50 inches long and right at seven pounds. River mama! Just what he had been dreaming of and I was there to see it! It was thrilling to see the happiness on his face as we both took pictures and documented her length, girth and weight before he released her back to her cool waters. What an exhilarating moment and I breathed a sigh of joy and relief. 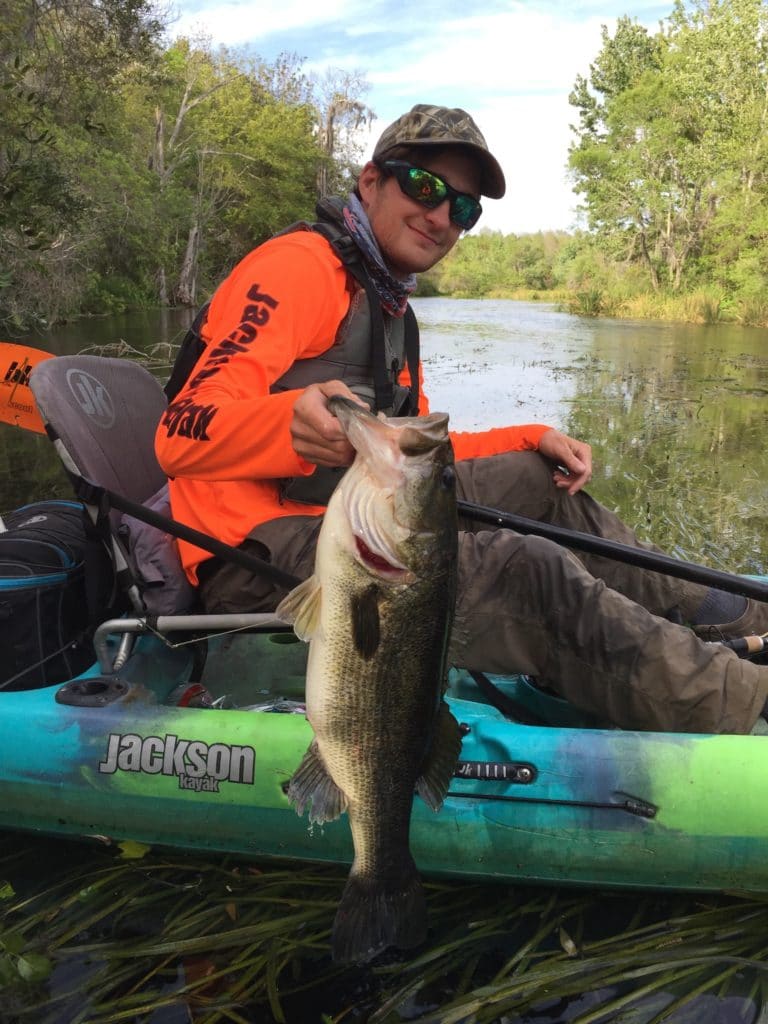 But our momentous day was not over…..

My fishing buddy had caught the big lunker largemouth that he had been seeking near the end of an otherwise slow fishing day. We were both giddy with happiness as we
headed back downriver toward the ramp. The sun had set and since the springtime alligators were very active and feisty we stayed close together as the light dimmed, continuing to throw out our lures. Still on a high after his longed for stellar catch, we chatted about where and how he had found her. His success had made for a very satisfying fishing trip. It was dark now and our headlamps and lanterns just barely made out the tufts of rice, grass and openings that marked our normally productive spots.

The mental notes made earlier in the day finally paid off when I casted my lure across what I remembered was a hole in the grass and burned the buzzing worm quickly on top. A huge fish exploded out of her lair and snatched the worm so aggressively that the sound made me react instinctively with a quick and hard set. She dove down with such power and heft that I knew this was either a big bowfin or another monster bass! Travis was right beside me as I brought her to the surface and we looked at each other with our mouths agape.

She was immense! A giant river bass! I reached in and grabbed the thick bottom jaw of her huge bucket mouth and held her in the water while scrambling to get out the measuring board, scale and tape measure. Usually I fish solo and rarely have someone there to help take pictures but my teammate whipped out his camera and started taking some rare-for-me hero shots. All the while I was thinking that I wished that he had been the one to catch her! I’ve had my turn many times over and didn’t want to overshadow his amazing catch from earlier in the day. But he didn’t let on any disappointment and continued to assist me with great enthusiasm. As we continued to document her we heard loud topwater feeding close by but Travis ignored the enticing sounds and stuck by me to get the photos and share in the excitement. She was a whopping 12 lbs 12 oz, 27.50 inch length with a 22 inch girth. A magnificent creature! 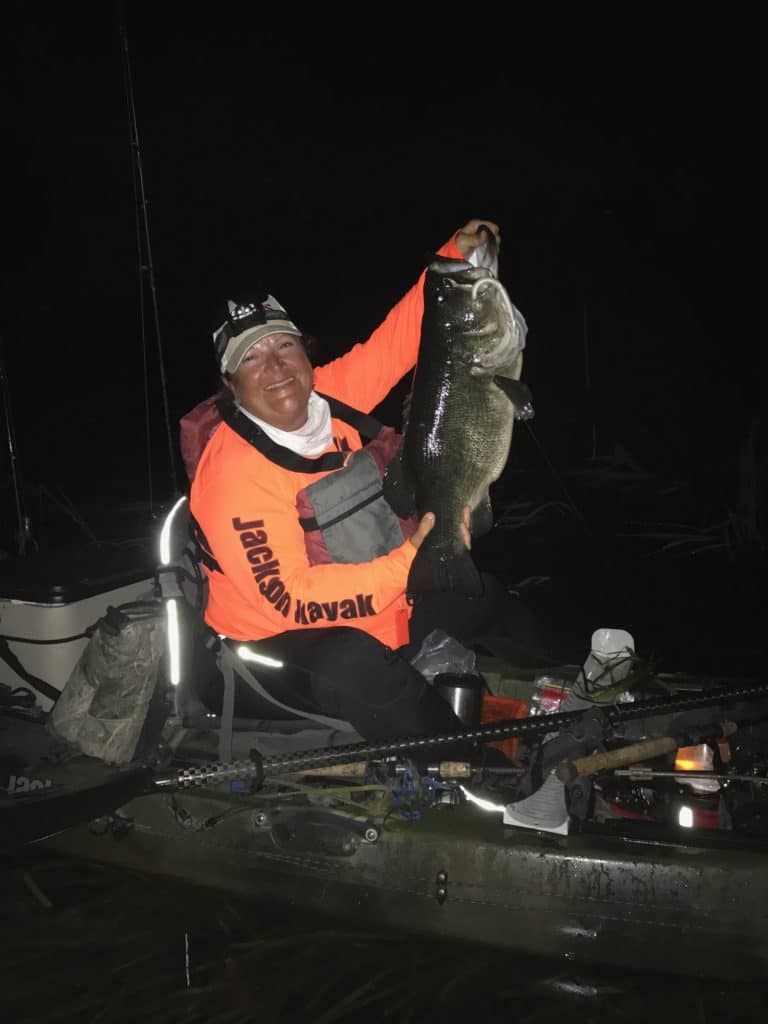 After the quick photo session and release of the bass we were both still shaking with excitement. The thrill of encountering such giants never wanes. Forever an awe-inspiring moment that is truly unforgettable. With our headlamps flickering and fading we paddled to the ramp in the still darkness of the river, grateful that we could experience each other’s momentous catches on this rarified day!