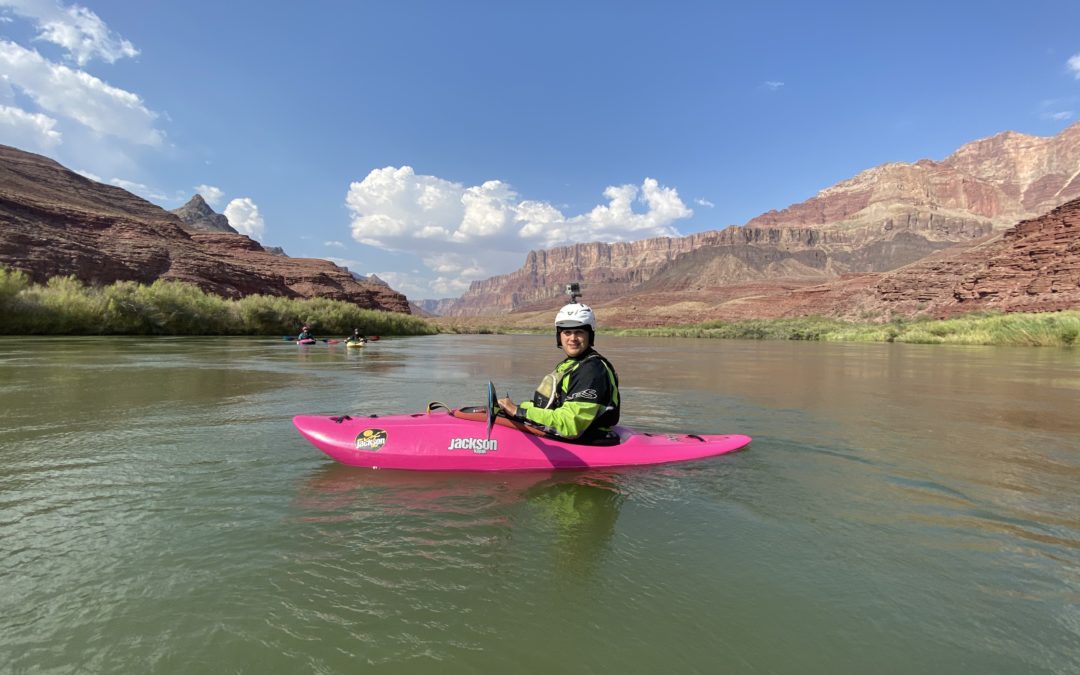 I had the fortunate opportunity to test out the Jackson Kayak Antix 2.0 at one of the greatest American treasures, the Grand Canyon of the Colorado River. This was my first time seeing an Antix 2.0. What better than to take it on a 280 mile test drive? Having paddled the Antix 1.0 for the past few years, I was nervous about the Antix 2.0. I LOVE the Antix 1.0! I considered it to be one of my favorite kayaks I’ve paddled in my 11 years of paddling. The Antix 1.0 surfed like a dream. I could paddle the Large size with confidence on everything class IV-IV+ at 6’0’’ and 185 lbs. 90% of the time I had a kayak with me, it was the Antix 1.0. How could the Antix 2.0 live up to the Antix 1.0’s high bar? 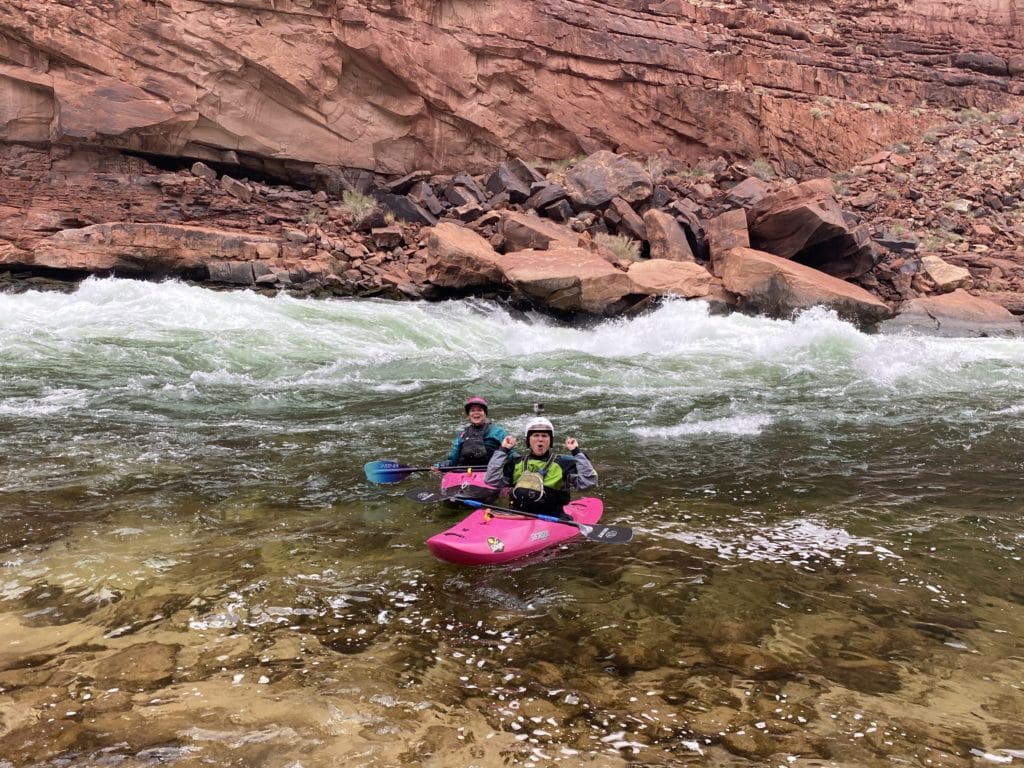 Well folks, I truly understand why the Antix 2.0 is described as being an improvement on the already wonderful Antix 1.0. First things first, I love the new seat position as my knees are higher than the frog leg position in the Antix 1.0. I found both seat configurations to be comfortable, but I find with the higher knee position that I can engage my hips and core muscles a bit more effectively. This was very important on the Grand Canyon, as I constantly had to do ab crunches to stay in control on the massive waves. I really appreciated the extra foot room in the medium size Antix 2.0, as I did struggle to fit my feet in the Medium Antix 1.0 while wearing Astrals. I was able to jam my feet in the Antix 1.0, but now I am completely comfortable in the Antix 2.0. I also can say that I remained comfortable for all 280 miles of the Grand Canyon, not an easy task. 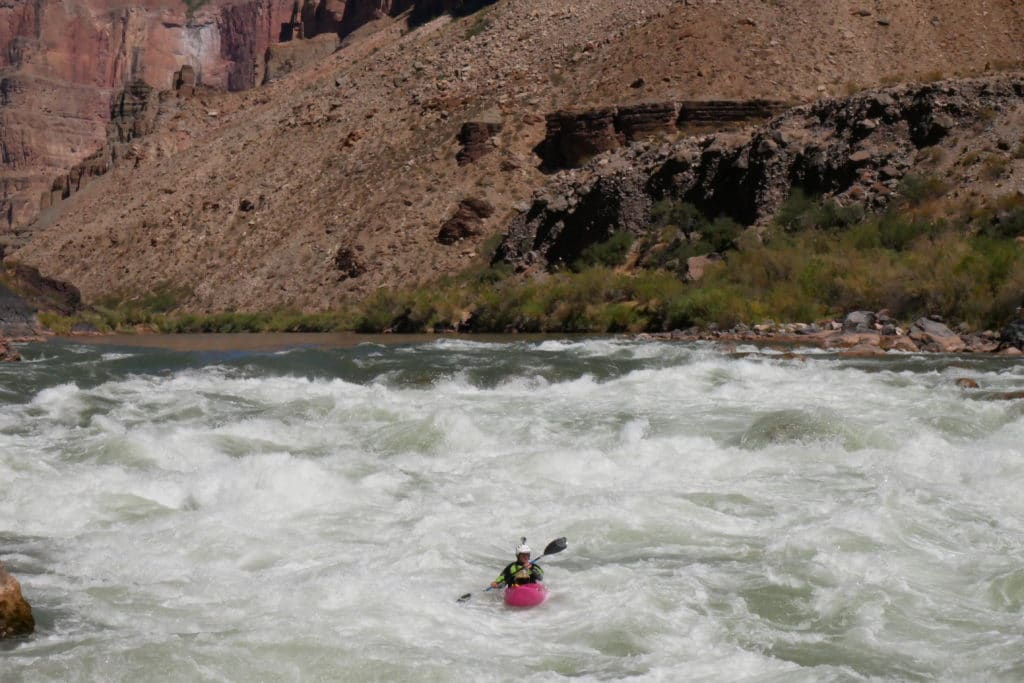 While I paddled the Antix 1.0 at the Large size, I opted to paddle the Antix 2.0 at the Medium size. This made me a bit nervous, as I was going to paddle VERY big water in what I thought would be a smaller boat with a squirt stern. The Antix 2.0 immediately gave me confidence. If felt familiar to the Antix 1.0, being stable on big rapids and keeping the stern from squirting during the big rapids. The stern of the Antix 2.0 is A LOT slicier than the Antix 1.0, but like the Antix 1.0, the stern needs to be engaged to stern squirt. When it’s not engaged, you’re good to go on the big and really big rapids. I paddled it through Lava Falls, Granite, Hance, and other big ones on the Grand Canyon and felt just as confident as I would in my Nirvana. I really like having a one-stop-shop kayak. If the water is higher than expected, I’ll be fine. If the water is lower than expected, I’ll be fine. I can take the Antix 2.0 to all but the very most difficult places I’ll paddle. Heck, my Rockstar 4.0 and Nirvana are getting a little jealous since I’ve come back from the canyon.

An unexpected plus of the Medium Antix 2.0 is that I can fit my Watershed Futa float bag with a 4-piece breakdown paddle in the stern. I was not able to do this in the Medium Antix 1.0. Yes, the Antix 2.0 has less stern volume than the Antix 1.0. Understandable if you need to read that twice. It’s true! Thanks to the fine folks at Jackson Kayak, you can get your slice on while carrying the safety gear you need to run the gnar. While on the Grand Canyon, I was able to pack a Watershed Ocoee on one side of the stern and the Watershed Futa float bag on the other. …and the kayak still paddled confidently without unintentional stern squirts. So you can pack that breakdown paddle, first aid, and pin kit while slicing up your local rivers. 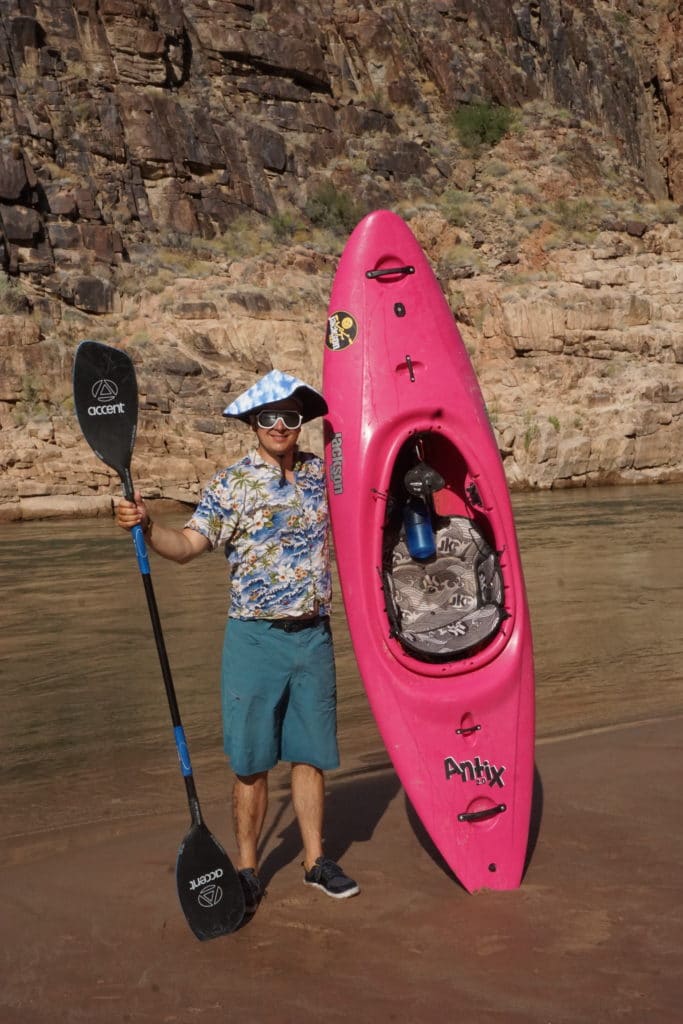 Speed. This was always a concern for other paddlers I talked to. Was the Antix 2.0 fast enough? I never really had this worry, as I thought the Antix 1.0 was perfect for surfing waves and staying on them. The Antix 2.0 was no different. Once on a wave, you’ll have no problem staying on it, carving every inch of a wave, and throwing some sick moves. I was again shocked that the surfing felt even better on the 2.0 as I had a bit more control of the kayak while on the wave. On the bigger rapids of the Grand Canyon, I had no problem making my moves, sailing over big waves, and zooming beyond the epic whirlpools. I just think the 8-foot mark for this kayak is very good, as it allows for making sudden changes in direction while in big wave trains, and has plenty of oomph to make it through holes. I also remember that a lot of those epic expeditions I watched early in my paddling days were in 8-foot kayaks. If you’re looking for a direct comparison, I paddled alongside a Axiom, Rewind, and Ripper and had no trouble keeping pace with everyone.

The fun factor of the Antix 2.0 was off the charts. I could paddle very technical lines one minute, and then splat and surf everything in sight the next. I am so thankful that I was able to ship an Antix 2.0 to the Grand Canyon and paddle all 280 miles from Lees Ferry to Pearce Ferry. I was able to fly it home with ease via Southwest Airlines (yay airlines with kayak policies). I also didn’t mind having a lightweight kayak as it made hiking to and from camp each day so much easier, as well as navigating an airport. If you’re heading to the Grand Canyon, I highly recommend taking an Antix 2.0 with you.