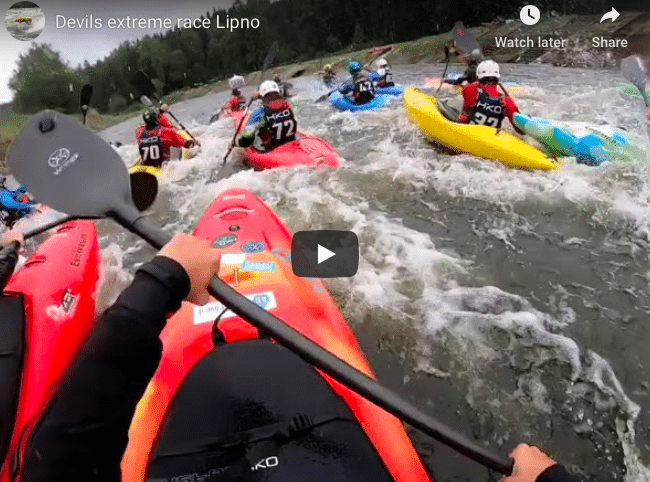 Last weekend one of biggest whitewater events took place in southern Czech Republic in Lipno at Vltava River. Event gathers hundreds of paddlers from all around the Europe to enjoy one of very few water releases that happens over the weekend. Multiple kayaking disciplines take advantage of it organizing events in Slalom, Rafting and finally Extreme Kayaking.

Devils has been on Whitewater map for a while now especially as for few last years European Championships and the final of the European Cup were taking place. My first time to the event was 10 years ago and that was probably mine first whitewater river. My friend took me over for the trip with my playboat and said – just follow me, you should be fine. Continous waves, pushing water and literally paddlers all around you sometimes waiting in the queue to run the rapid but sometimes running it alongside you and bumping in the middle of the way, that is sometimes Devils. But it has some great rapids too, the window, papiernia and stairs are the most reconized ones being big, intense and for stairs – technical rapid. There is one more that only the bravest will run which is called bloody hand. Gives you twinkles? It is not spectacular, nor very technical. It is just pushy and edgy and rocks that get covered by water few times a year, despite being round – they will work like sand paper for your skin. Would you dare? On the end of the day you can see a lot of people walking around with fresh bandages over hands showing what bloody hand has done to them.

Very unique thing during the weekend to be remembered is that you don’t have to worry about the shuttle! You simple get to the take out, walk to the train station where every 30 minutes comes a local train ready to bring hundreds of kayaks and kayakers to the middle or upper section to enjoy as many runs possible!

During the whole weekend, numerous events are taking a place including slalom, whitewater race and rafting all of them happening in the upper part of the kayak course. At the same time, Devils Extreme Race takes a part that has welcomed 83 paddlers this year in two main events.

The race kicks off with a sprint where each paddler goes on their own down 1.5km trail through Papiernia and The Window finishing just above the Bloody Hand. The top 32 competitors make it to the next round of kayak cross which takes place at the most technical rapid of the river called the stairs. This year it didn’t disappoint providing a huge show to the crowd as always. Matthias Weger snatched the win before Janosch Plathner and Andi Brunner in Men’s category while in Women Nouria Newman took a win followed by Martina Rossi and Elena Luciotti.

The second race is over 7km through the whole river section where all paddlers start from below the dam and go through the racing course at the top, lakes in the middle, papiernia and towards the window. If you are in the top 20 during the race you pass the checkpoint and continue down to the finish line. In this round fastest was Matthias Weger followed by Michele Ramaza and Janosch Plathner. In women, Nouria Newman came first followed by Lucie Součková and Elena Luciotti.

Second part of the day is at least as important as first one during the Devils Extreme Race where paddlers gather to share the stories of the day, make plans for upcoming year and enjoy Czech traditional beverage dancing to live music or DJs. This year the part was led by incredible bands The Closing Date and Move Breakers which definitely everybody is looking forward to seeing again next year. During the party, winners were announced with the overall winner for the whole event being Matthias Weger in Men, Nouria Newman in Women, Lucie Součková in K1JW and Huw Butterworth in K1JM.

Here is a quick check with Andi Brunner who performed great making it to the podium!
How did you like the event and what was your favorite part?
The event was great like always. I really enjoy the devils extreme race. Especially this year as it was the only kayaking event i have been to. Even more stoked i had a good race. Its quite hard to get a good ranking at devil’s because you have to perform in all three races during one day. So my favourite part was definitely when i managed to push through all three races and performed at my best. Or maybe it was the party, hard to tell because I don’t remember much of the party

It was a great event and I hope to come back next year! In the meantime, enjoy the short video from paddling: