Bringing the FUN back into Freestyle Kayak Competitions 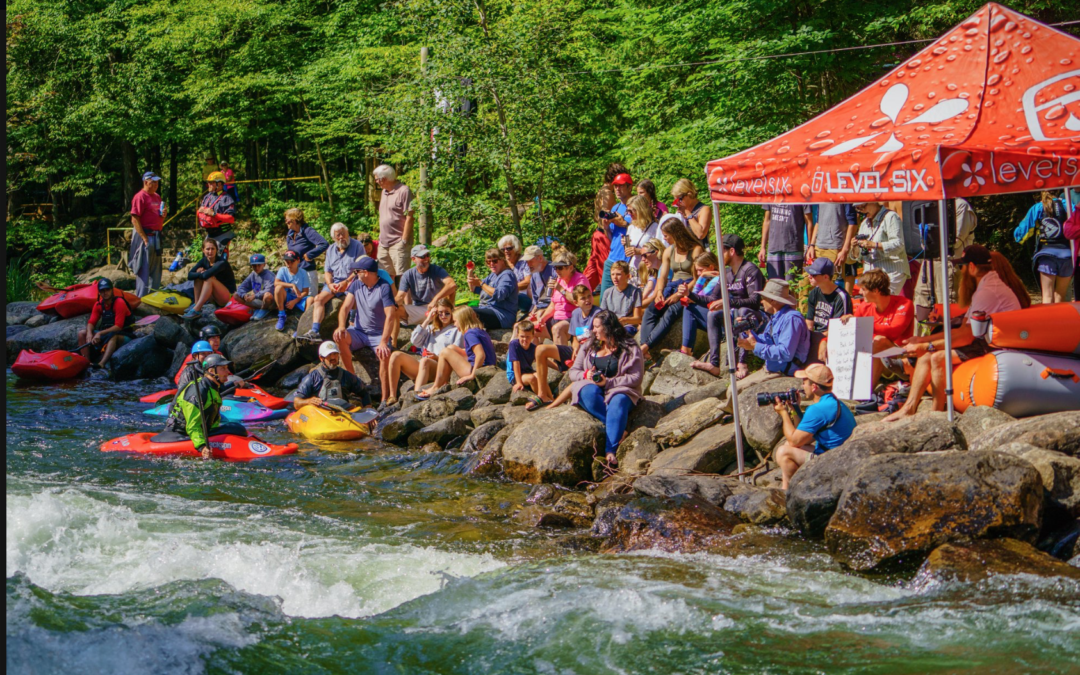 Freestyle Kayaking (aka playboating) is a relative newcomer in the history of whitewater kayaking, really coming of age in the 1990’s as boat designs started to lend themselves to playboating tricks.

Playboating competitions grew and evolved in a similar manner as other “x-games” sports, with local and regional competitions popping up, eventually leading to national championships and World Championships. They were organic and freeflowing, with a high degree of input and engagement from athletes, who in many cases also helped organize the events.

In 2006 Freestyle Kayaking was recognized by the International Canoe Federation (ICF) as an official “discipline” and the world championships in 2007 were the first ICF Freestyle sanctioned Worlds. While being under the ICF umbrella expanded the visibility and awareness of the sport, it also brought structure and rules to a grass roots sport, and associated events.

Over the last 15 years, the sport of Freestyle Kayaking has continued to evolve, as do all sports. It has become more sophisticated and started to grow up. There is more structure and a lot more rules. Judging standards have been raised as tricks and competitors have continued to push the limits of what is possible, thanks to continued evolution in boat manufacturing. 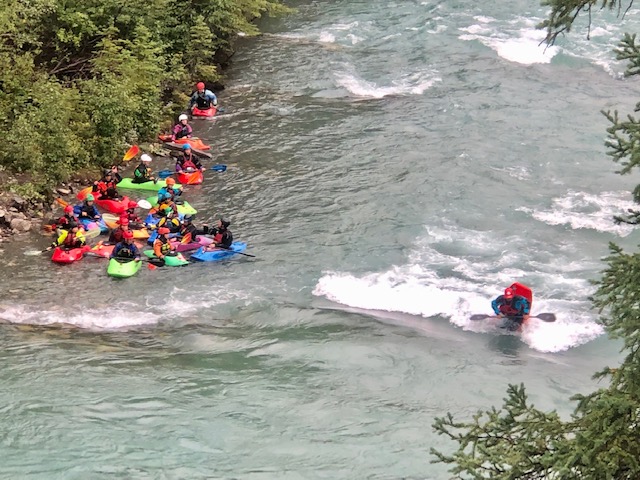 At the same time, we’re also starting to see a decrease in overall playboating participation at the grass roots level because it is perceived as too difficult and complicated. This is not a good thing for the growth of the sport.

In Canada we started to experiment with running Freestyle kayaking events differently last year, as part of our overall efforts to grow the sport and increase participation. Working with some kayak clubs across the country, we started playing with competition formats to find a way to run a fun event that got a broader number of athletes involved, were fun to participate in, and left people excited for the next event.

We ran these formats at local club level community events, provincial championships and at our National Championships last year. We got glowing reviews from all athletes that participated and increased interest in participating in these style events moving forward.

Here are a few of our event formats that we hope will help you bring the fun back into Freestyle: 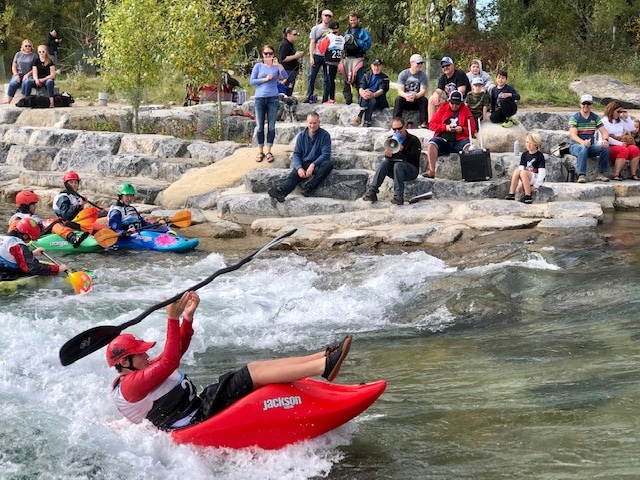 This is based off the premise of HORSE in Basketball but has some structure vs one person leading the game. The tricks start at easiest and slowly progress to hardest, with each athlete taking a turn to try to do the trick. Each turn that you are unable to do the trick, you earn a letter in the word. We vary the word based on the size of the group and the difficulty of the feature. Sometimes it’s a 3 letter word and sometimes it’s a 5 letter word. With the first trick being front surf, and the second being side surf, most paddlers make it through the first two rounds before they start collecting letters. That means that they participate five to seven times before they are out, which is significantly more than the two rides in regular competition format. When paddlers are out they remain either in the eddy or on the shore and continue to cheer for the other participants, making it a fun community building event. 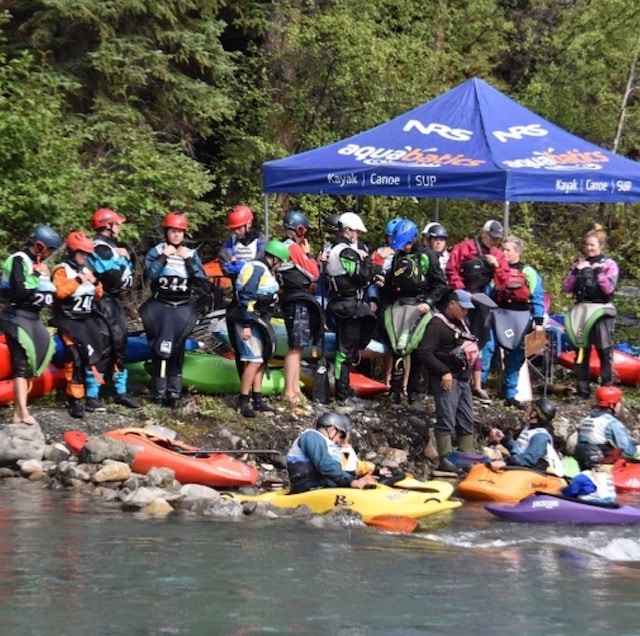 The object of the game is to earn as many points as possible. Every trick completed is 1 point. Gameplay happens in rounds and every rounds requires an athlete to complete 3 of the 5 tricks listed in that stage to move on. If an athlete executes less than 3 tricks they are given the letter K for that stage. On the second occurrence of less than 3 tricks in a stage, the athlete is given the letter O and is knocked out and unable to enter any more stages.

There are 4-7 athletes per heat and each heat runs for a pre-determined amount of time. Each participant is allowed a “shot-clock” time for which they can be on the wave for (once this time is up they are forced off in order to maintain the order. The shot clock starts upon the flush of the previous participant. Once all 3 tricks are completed the participant exits the rotation but stays in the eddy to cheer the others.

1 whistle blow signals completion of the trick and 3 whistle blows indicates all of the tricks completed. 1 long whistle indicates time is up.
If time allows there can be a bonus round in which everyone has a 30 second shot clock. Athletes go one at a time and must complete a trick they are missing from the round they got either the K or the O in. If they complete that trick they get an extra point.

Every point gets the Athlete an entry into the prize draw at the end of the event. Those with the most points have the highest odds to get drawn, but it’s not guaranteed, which makes it fun for all.

As this is focused on skill development, the fun trick names are intentional to build skill and have some fun:
• Fly on the wall – catch a surf on the fly. Must start in the flow above the upstream peak of the feature and surf without flipping for a 3 second count
• Blast off – dynamic forward movement of the bow up the green water, knees must be past the foam pile, “touchdown” must be achieved without pearling the bow
• Roundhouse – dynamic horizontal rotation of the boat from an angled front surf around through to a back surf on the opposing side. Can be completed with a carve or bow release
• Jetstream – must surf across the entire foam pile of the feature and exit beside the foam pile
• Slap the Monkey – while in a side surf position, take one hand off the paddle and slap the foam pile, regain hand position on the paddle
• Back- blast – dynamic forward movement (while in a backsurf) of the stern up the greenwater, hips must pass the foam pile, “touchdown” must be achieved without pearling the stern
• Retendo – an entire roll completed in the feature – also known as a windowshade
• Carve – clear change of direction from a 45 degree angled surf, using an opposing back rudder 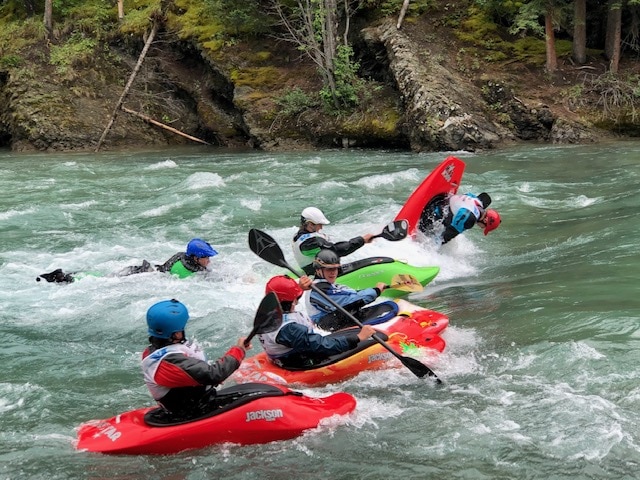 This takes a bit more organization but is super fun and accessible for paddlers of all skill levels. It is again progressive, resulting in more athletes participating longer and paddling more.

We have a board that faces the river with all the tricks written out for each round so the athletes can see it from the water. When a trick is scored, a paddler is notified with a single whistle. When a paddler has completed all of their tricks for the round, they are notified with 3 whistle blasts. The judges will often yell at the athletes to let them know what tricks they have left to do if they are unsure

An example of our skill progression rounds is:

This progressive model helps to reinforce the importance of continuing to practice the basic skills rather than just rushing in and only focusing on the higher scoring tricks. Less experienced paddlers were able to make it through the first round which gave them great encouragement and more experienced paddlers had to work through a diverse set of skills. All paddlers stuck around for the entire event, cheering on everyone throughout the day.

** Developed in partnership with Trevor L’Heureux, Eau Vive Quebec
I hope this gives you some ideas for how you can stray away from the ICF structure and use freestyle competitions as a way to build community, build paddling skills and increase the number of paddlers that come out to your events!