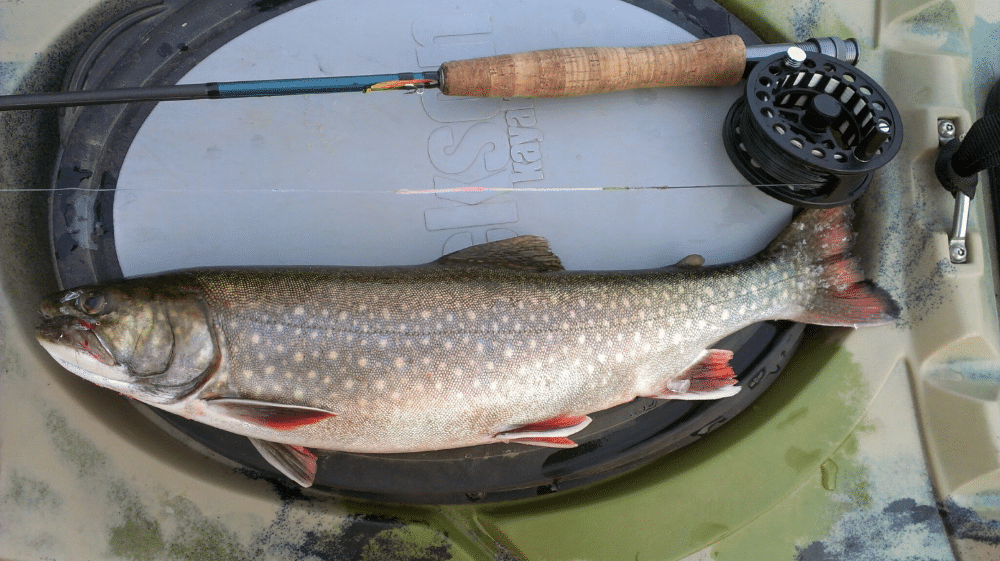 Throughout the ice-belt of the Northern U.S and Canada,
April is the time of year many of us have been waiting for all winter. Open
water! The kayaks have been pulled out of storage, the Robins are singing,
geese are flying, and the birch buds are the size of mouse ears. It’s time for some epic ice-out trout trolling action by trolling flies!

There are just so many species to choose from throughout
Eastern Ontario. From the world’s highest concentrations of natural Brook Trout
lakes in Algonquin Park to the numerous put-grow-take still-water lakes
offering many kayak fishing opportunities for Splake, Rainbows, and Lakers.
http://www.algonquinpark.on.ca/news/natural_brook_trout_lakes.php

One of the most effective ways I have discovered to catch
these early season trout is to troll flies on a sinking fly line. This
technique is extremely efficient and easy to learn. ‘Dragging flies’ as I call
it, keeps your fly consistently in the strike zone between the 5 to 20-foot
range. I like to think of ‘dragging flies’ as the great equalizer. An angler
doesn’t even need to know how to cast! This is a killer trolling technique that can elicit aggressive, heart-pounding hook-ups and an instant shot of adrenaline that all anglers crave! 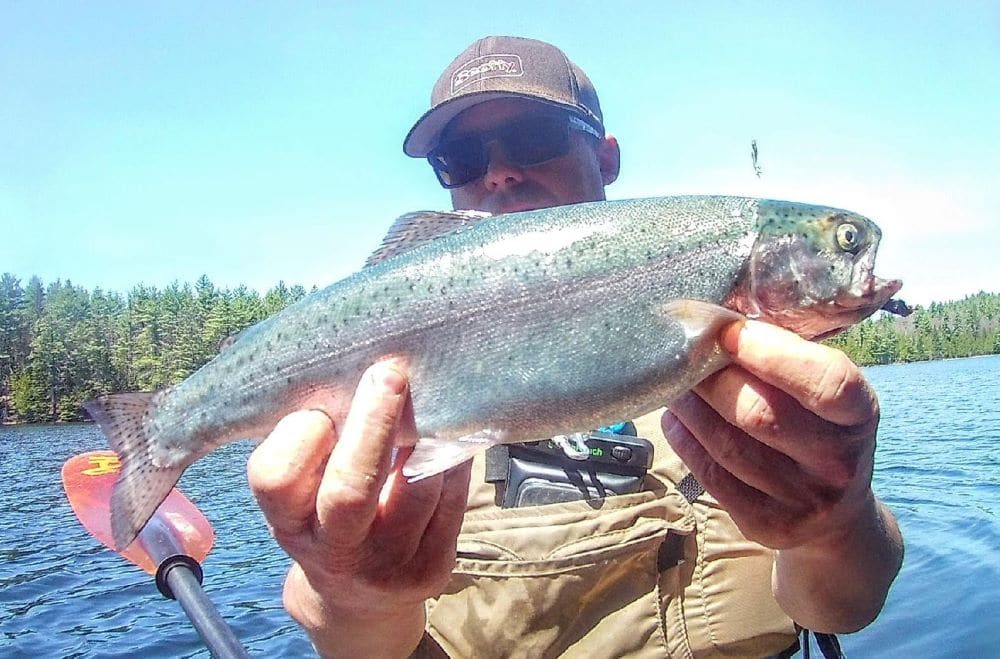 On an early spring trip to a backcountry trout lake a few
years ago, I managed to catch triple the number of fish caught by my friend who
was casting out of a float tube. He couldn’t believe the success I was having
with this simple technique! To me, it made total sense. I was covering 100
times the amount of water, varied structure, and vegetation. His position
(while off-shore and in a float tube) was stationary; effectively limiting him
to the length of his cast and what lay beneath. 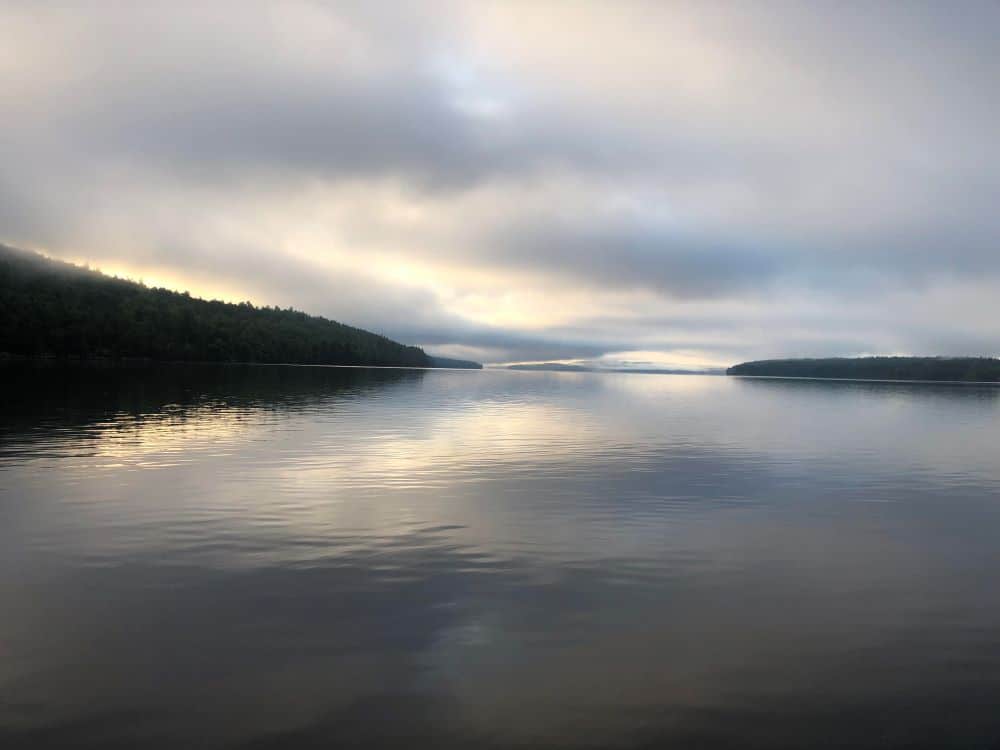 I like to place the fly rod between my abdomen and belt
lie when paddling. This allows the kayak angler quick access to the fly rod to
add twitches and jerks between paddle strokes. If this technique doesn’t work
for you, a rod holder placed close to your body is another option. Zig-zag
across the lake hitting potential hotspots such as mid-lake humps, drop-offs,
shoals, and weed beds. When you get ROCKED by an aggressive trout, circle back
and hit the same spot again. Soon enough you will develop a route that will
continue to target the most productive areas.

For this technique, I prefer an inexpensive 9 foot, stiff
action, 5/6 weight fly rod combination in the $100 range. A decent fly rod
combo will typically be pre-spooled with a floating fly line. For an additional
$50 you can purchase an extra fly reel, and spool it with 100 feet of type 5
full sinking line. (TIP: mark a one-foot section of fly line using a silver
sharpie at the 25′ mark, the 50′, and 75′.

This gives you a visual clue as to
how much fly line you have out. For example, 25′ feet of line behind the kayak
sinks roughly 5′, 50′(10′), 75′ (15′) and 100′ (20’+). For the leader, tie a 9-
foot section of 6Lbs fluoro leader material such as ‘Berkley Vanish’. I use the
Raymarine Element as a fishfinder. Using both the sidevision and downvision
allows me to find structure, fish, and vegetation with amazing crystal-clear
imagery. http://www.raymarine.com/element-series/element-hv/models.html 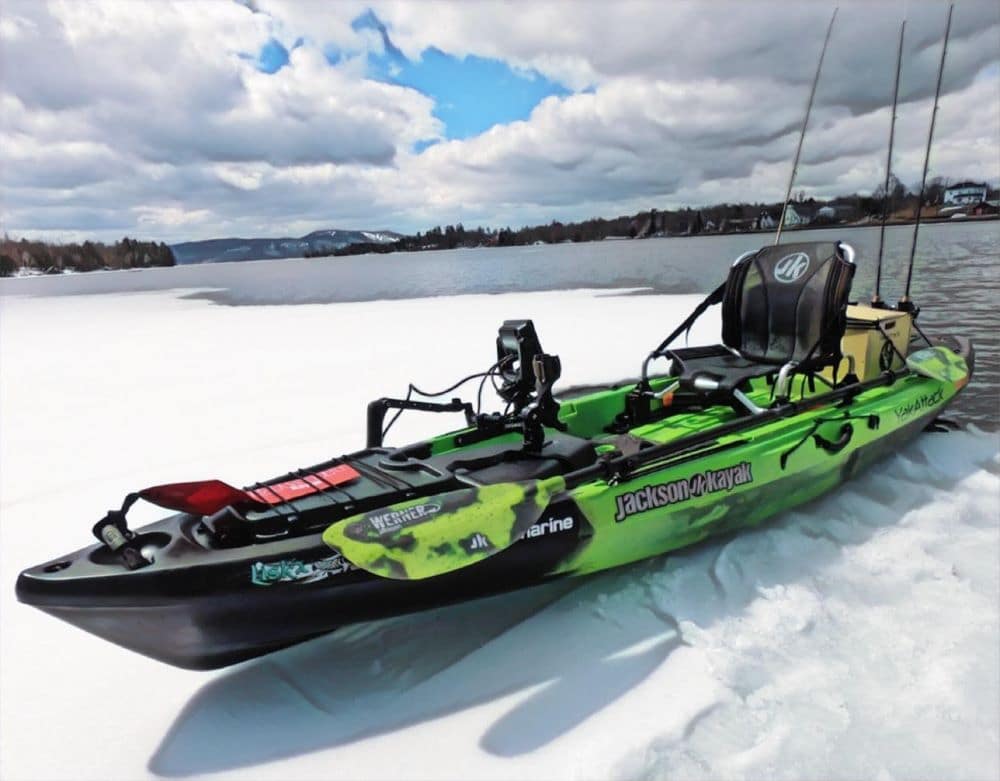 Flies used for trolling should be tied on a size 4 to 8
hook. I’ve always liked streamers tied with rabbit hair or marabou. These
materials give your fly an undulating, life-like look with each propulsion and
pause of a paddle stroke or rod twitch. There’s no hard or fast rule on what colours
to use. Experimenting is key while trying to ‘match the hatch’ as best you can.

When dragging flies, try starting with a slow, gentle
pace. Paddle slow enough that you are slightly moving, but not so slow that
there isn’t constant tension on your line. A few paddle strokes forward,
followed by a pause, then a twitch-twitch of the rod and repeat. If paddling
into the wind, obviously a harder paddle stroke is needed. Vice versa if the
wind is at your back. 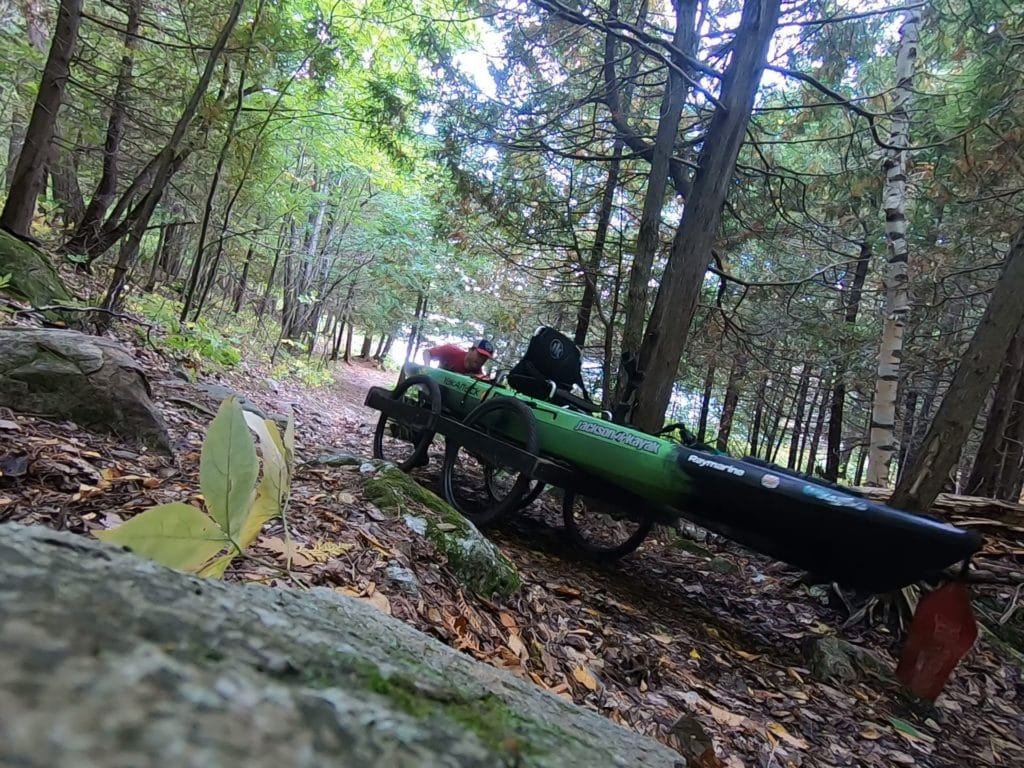 As with any kayak trolling technique, the hookset simply
consists of a few solid paddle strokes forward. With so much line out, the fish
will often hook itself. To further drive the hook home, simply pick up your rod
and firmly sweep it forward.

Dragging flies for Ice-out Trout has been my absolute go-to
tactic. This technique is highly effective and extremely efficient. If you can
figure out the right depth and speed, you’re well on your way to experiencing the thrill of the hook-up. Next, get ready for an aerial show, because, in cold water conditions, there’s a good chance the trout will give you a VIP performance!

So tie on your favourite fly, go for a paddle (or pedal) and get ready for the tug. You’ll be hooked in no time!