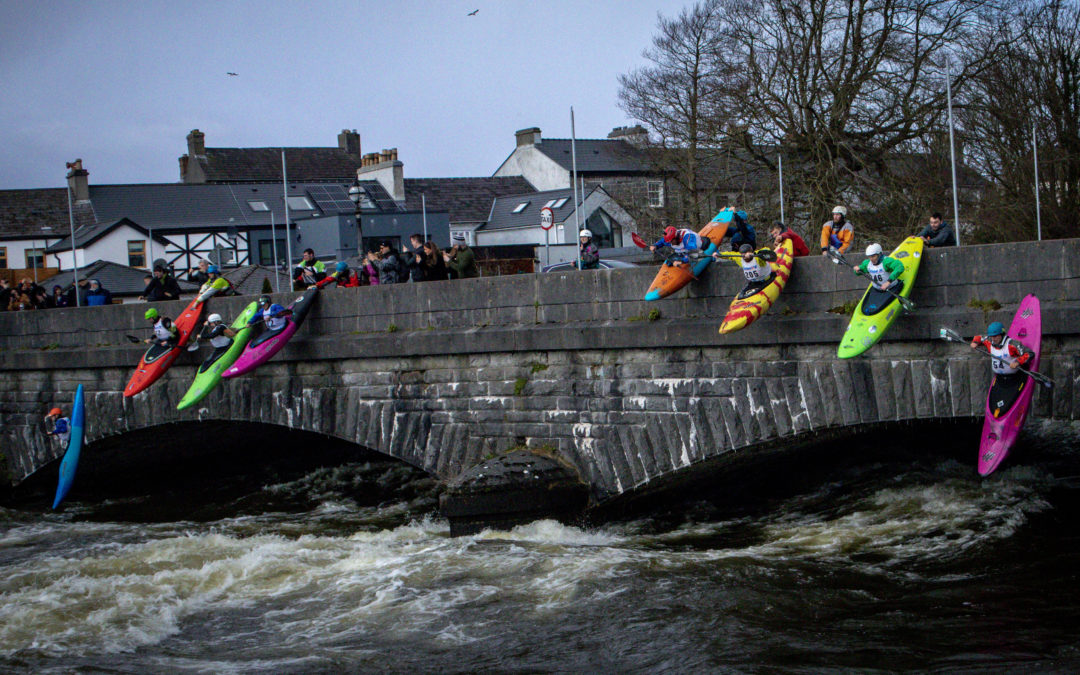 Galway Fest’s 9th anniversary was another one to remember. What a start to the event with a sell out registration of 250 tickets in just under 6 hours!

Once again the rain gods aligned the weeks leading into the event. The freestyle spot is a unique one, with the spectators up close to the feature under a canopy of Irish woodland, the ability to share advice and cheer each other on is a big part of what makes this day so memorable. As the finalists are drawn and the light starts to fade, the true spectacle of this event unveils. Dusk gives way to the bright lights on the banks, at which point, the stage is set. The women’s final show-cased some of the world’s best female freestylers on the scene right now! Spain’s Nuria Fontane i Maso, Austria’s Denise Rebnegger, US Sage Donnelly, Ireland’s Aoife Hanrahan, UKs Lowri Davies, Heidi Walsh and Ottilie Robinson Shaw. 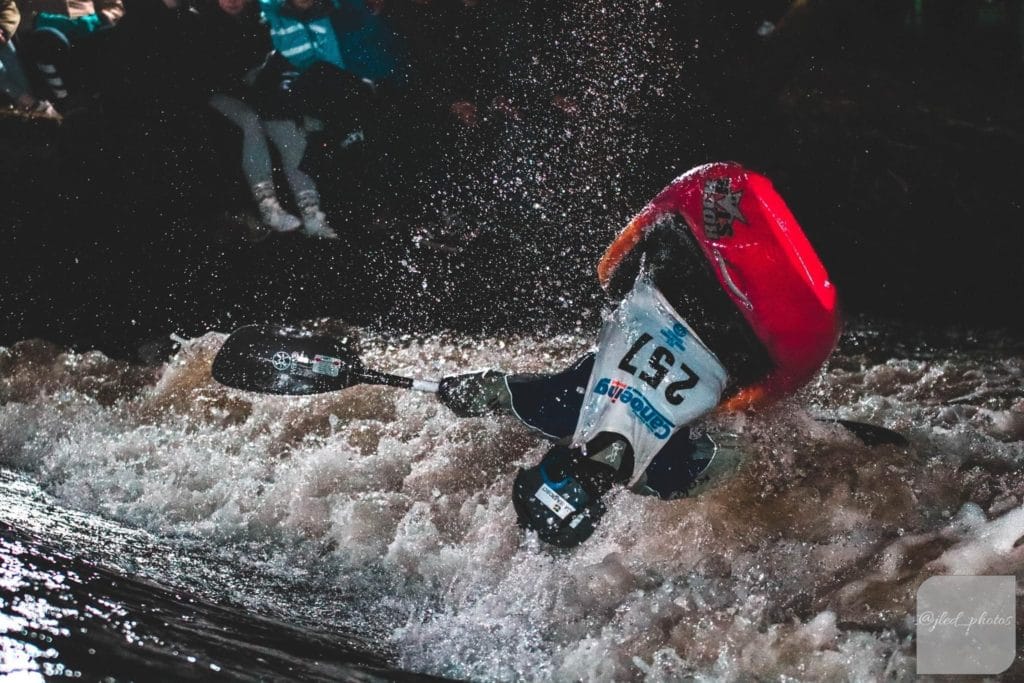 All women wowed the crowd with their rides going huge with some big air moves. Ottilie Robinson Shaw showed the crowd the reason she is the current world champion and why she is one of the most progressive and dynamic paddlers in the world right now, taking the win on Friday night! 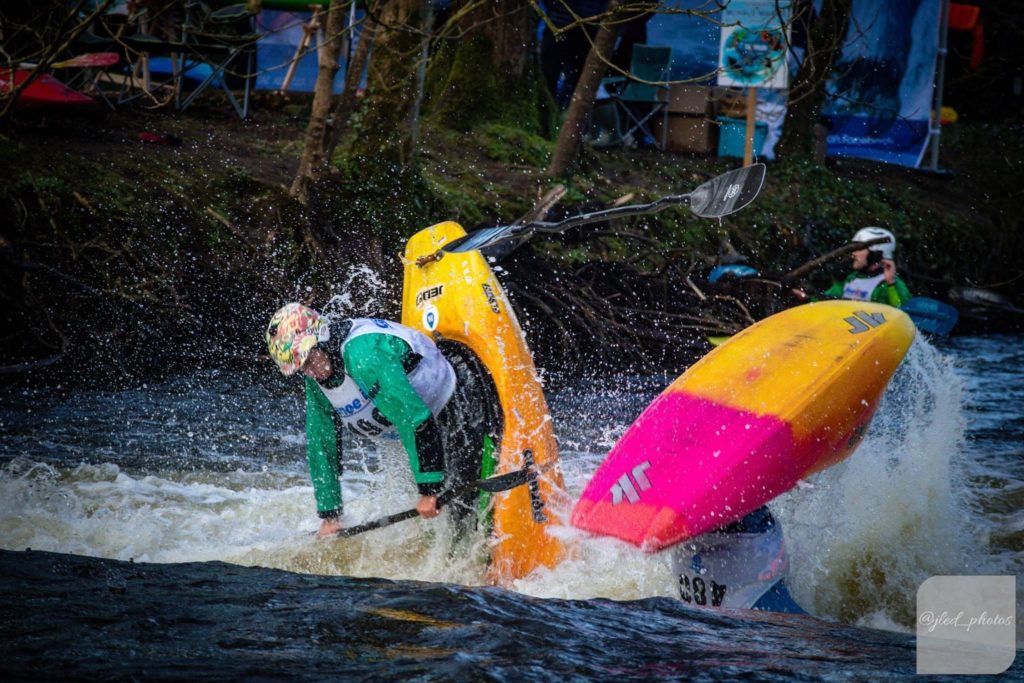 The atmosphere both on and off the water was electric. Each competitor cheering on the next as previous world Champion Quim Fontane Maso finished off the evening with an explosive and powerful ride taking the Galway Fest Freestyle Crown. 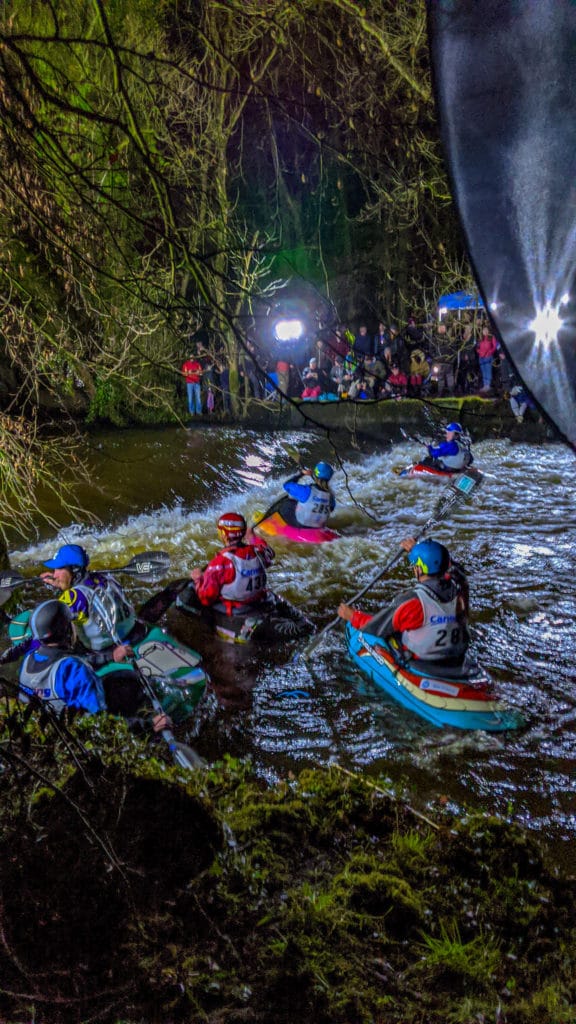 Saturday brought everyone out to the beautiful Gaeltacht (Irish speaking) coastal town that is An Spideal. The Boluisce’s (Tip: it’s pronounced ‘Bo-lish-ka) river gates opened up for our first racer early that morning.

Nick Bennet put down a blisteringly quick time, that was one of the fastest in Galway Fest history. Ahead of previous champion and 2nd place finisher on the day, Lucien Schreiber, by 3 seconds. Crowning Nick the King of the Boluisce! Or the Boly-sluis-e if you were to ask him… US paddler and slalom athlete Sage showed her incredible skill’s, taking the title of Queen of the Boluisce, pushing ahead of local Aoife Hanrahan on the course this year by half a second! Without doubt the final rapid Poll Gorm provides the height of entertainment for kayakers of a range of abilities all throughout the day. With spectators able to see the finish line of the race, albeit it not being a particularly difficult rapid- lactic arms after a gruelling 6 minutes prior paves way to some surprise finishes as athletes pull hard through the hole under the bridge, marking the finish line. Lots of smiles and laughs were had even through the rain showers and a particularly persistent Atlantic ocean ‘breeze’ ! 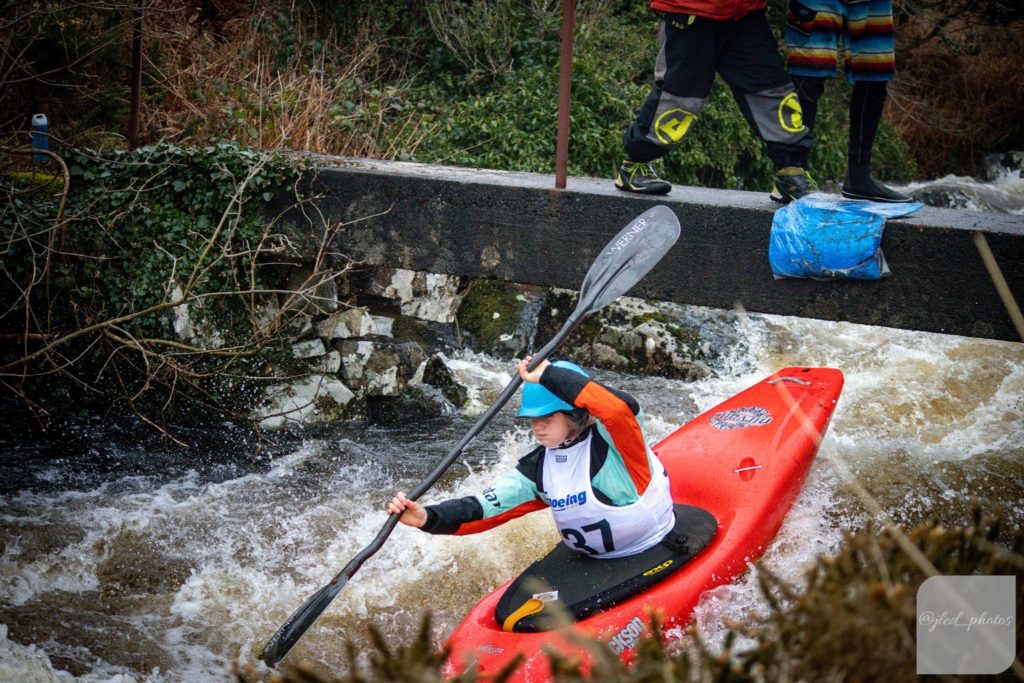 Team JK US paddler Sage Donnelly launching of the start bridge to throw down the fastest female time of the day!!
Photographer: Jack Ledwith

The day fell into the night, stories were told and friends reminisced grooving out in 80s themed style. The local kayakers showing the international’s how to celebrate a true Irish festival in style…..

As the sun came up, athletes flooded through the heart of Galway City to one of the festival’s highlight events, The NRS Corrib Boater X. 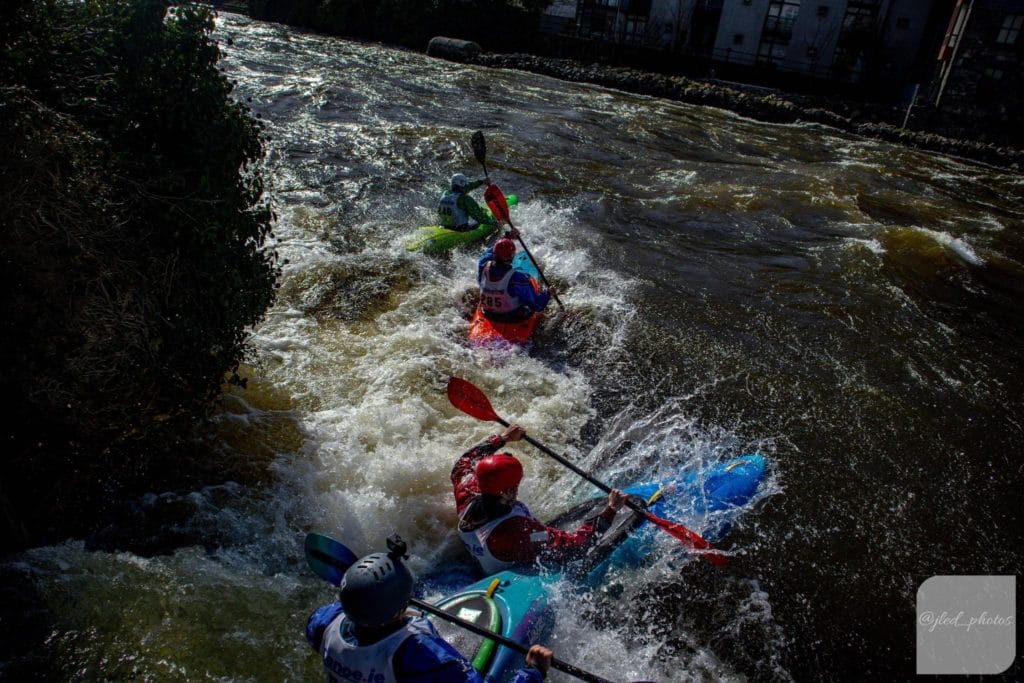 Jurys drop launch from a canal pool into the high flows of the corrib river! Ahead is JK paddler Lucien Schreiber.
Photographer: Jack Ledwith

Sage Donelly demonstrated those slalom skills of hers to to fly around the buoy and pushed hard to take the win!
The men’s final was yet again another showcase having a very ‘interesting’ start from one of the main bridges on the river. The finalists made it very interesting for themselves during the race briefing, jokes turned into race rules, and now a seal launch off the bridge a mandatory kick flip, and an upstream gate stood in their way of victory. With a diverse range of kayaking background’s in the finals, concern’s ranged from the obligatory kickflip, the fight around the buoy, and even the height of the seal launch itself. The atmosphere was electric watching some of the fastest boaters on the scene race head to head. Irish Kayaker Sean Cahill once again took the crown!!

As the weekend drew to a close, the prize giving saw a talk from the legendary Dave Manby. He shared stories from all around the world, one that had the room in sheer silence. The atmosphere was electric when the winners were announced and the roars from the crowd filled the room, if it’s one thing the Irish community excel at, it’s support for each other. Sage Donnelly was announced the Queen of Galway Fest and Quim Fontane was announced the King. Our prize ceremony contains a sobering moment where we reminisce about our friends who will never be forgotten. With Corey Middleton taking home the well-deserved Alex McGourty memorial trophy and Bradley Skidmore awarded our dear friend David Higgins memorial trophy. 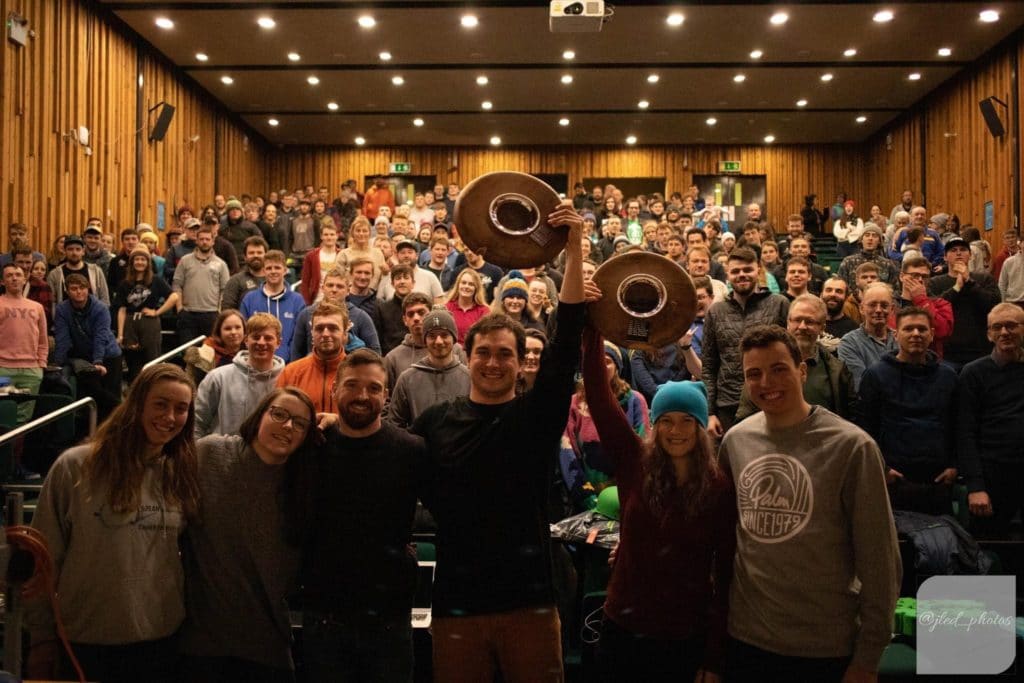 A big thank you to everyone who donated to the Higgins, McGourty and Vaughan fund with 800 euro going to each group: The Irish Community Rapid Response, Free the Rivers Fund, Balkan River Defence and the Kevin Bell Repatriation Trust.

The Galway Fest Crew want to say a big thank you to all of the incredible sponsors who support this event it would not be the event that it is today without them! They are very excited to announce that the 10th anniversary of Galway fest will be: