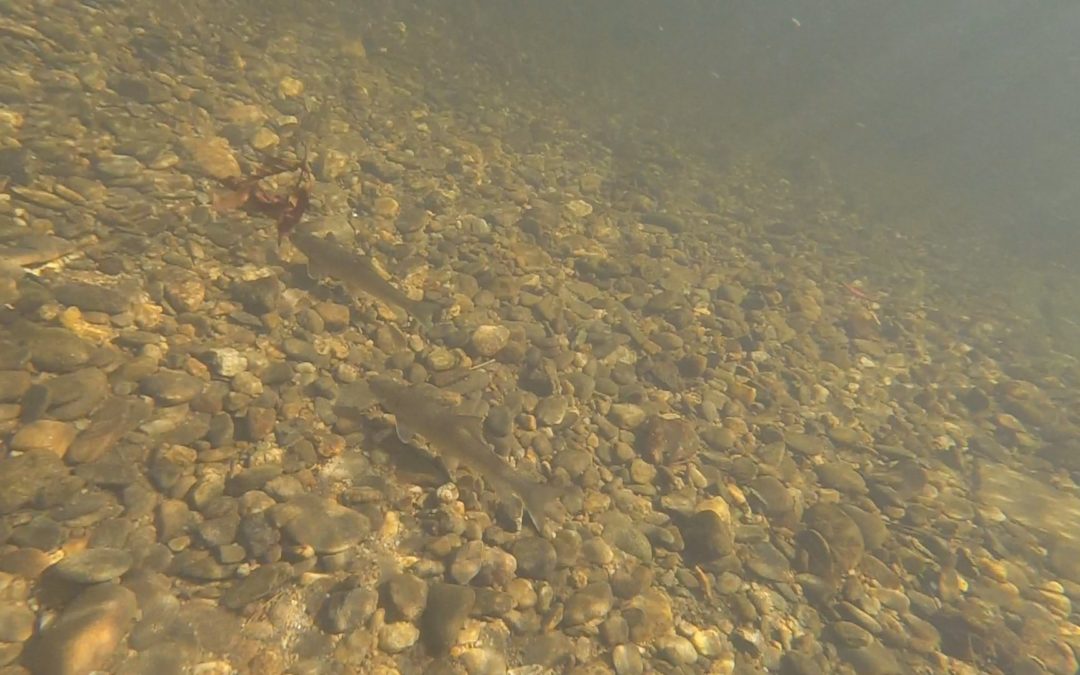 I just recently started to participate in Project Healing Waters here in Charleston, SC. They meet twice a month on a regular basis tying flies; except when winter arrives the volunteers of the group will help the Veterans on building a fly rod. When rod building lessons start the group will meet twice a week till the fly rods are complete. Other activities include casting lesson with a fly rod as well. The group leader then organizes some fly fishing trips for a few anglers to participate in. The trip that I managed to get to go on along with six other Veterans was a trip to Helen, GA for couple of days of fishing on the Chattahoochee River, the Soque River, and possibility the Smith Creek.

So what is “Delayed Harvest” when it comes to trout fishing? Delayed Harvest is a trout management strategy that provides a high quality catch and release trout opportunity from fall through spring. It is a stocking method that provides high catch rates for excellent learning opportunity for new fly anglers. Keeping the trout is now allowed during this harvest and is only catch and release with flies that are barbless. 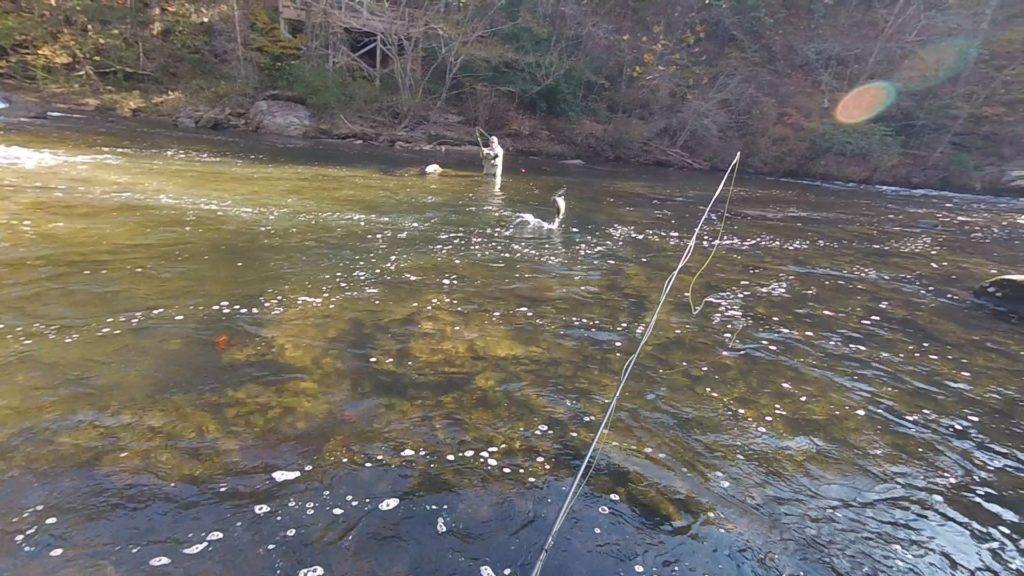 There are other factors that come into play to ensure that the trout will survive the winter months. The angler should play and land the trout quickly. As tired and stressed fish don’t survive well when released so handle the trout gently, keeping it in the water as much as possible. Unhooking the trout without lifting it from the water is best. Remove hooks with needle-nosed pliers or forceps and then release trout immediately. Following this guidance will ensure the trout will continue to grow and provide an exciting opportunity for the next angler. 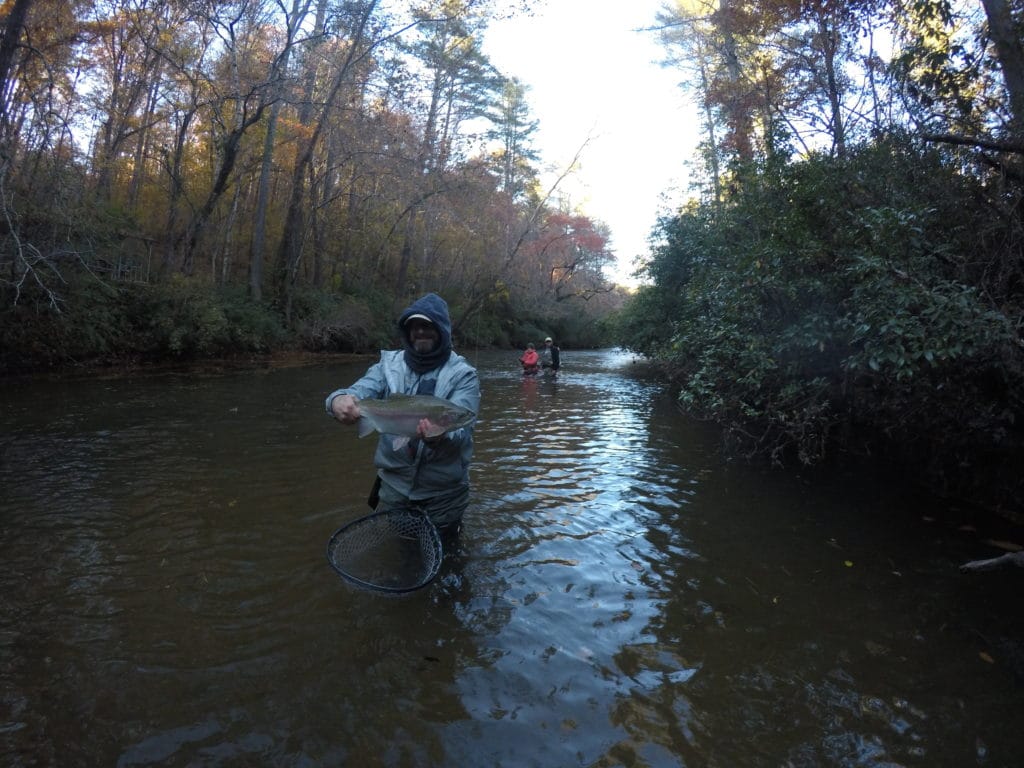 The first day we fished a section of the Chattahoochee River that is controlled by Unicoi Outfitters. I started near the dam and worked my way down river. At the dam my fishing buddy hooked into a nice rainbow that put on a great show by jumping out of the water as if that fish was a tarpon. The aerobatic performance of the trout resulted in Heyward losing this nice fish. His hookup was on a red squirmy worm.

I also managed to hook a nice fish at the dam that I gave me the impression that I had a snag in some rocks in a deep hole. As I maneuvered around to see if I could free the snag, all of a sudden my line started ripping through the water toward Heyward. This reminded me of hooking into a redfish on a grassy flat as the line cut through the grass. In an instance the leader broke and my spirits were broken. I had been bullheaded and opted to use a 6X tapered leader; where Heyward had told me that I should be using a 3X leader or better. After the fish bite turned off we decided to travel down river in search of other fish. 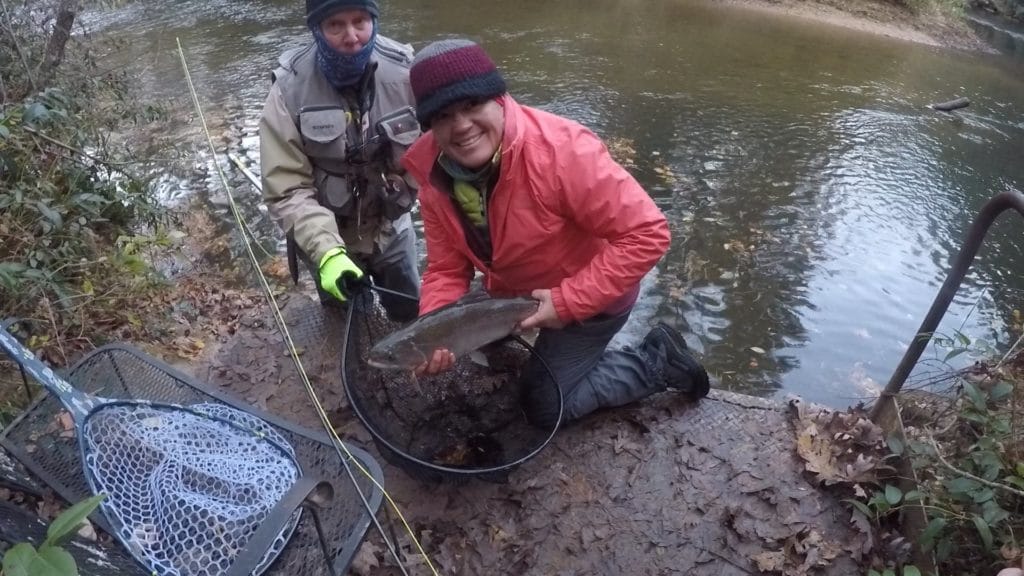 As moved to shallower water we managed to stop several small trout; which gave me hope that maybe the leaders that I had along would hold these trout. These fish and others that I came across downstream were not interested in my offerings or maybe since I could see the fish that they could see me and decided to ignore my flies. We ended the day with no more action.

After dinner and back at the hotel, the task of building droppers for the next day was at hand. This time I listened to my fishing buddy as I knew that we would be fishing a section of the Soque River that is maintained by Rivers Edge on the Soque Outfitters that is manages their section for trophy trout like Rainbows, Browns, and Palomino and increased my tippet to a 3X for this adventure. Fishing on the Soque started out just like the previous day on the Chattahoochee fishing was really slow. We took a break from fishing when the outfitter had lunch ready. After lunch something happened where the fish started to bite. I hooked into a nice monster of a rainbow but eventually the fish threw the hook. The fish were hitting the Glo Bug in peach color. A few minutes later I hooked into another monster and finally that rainbow made it to the net. 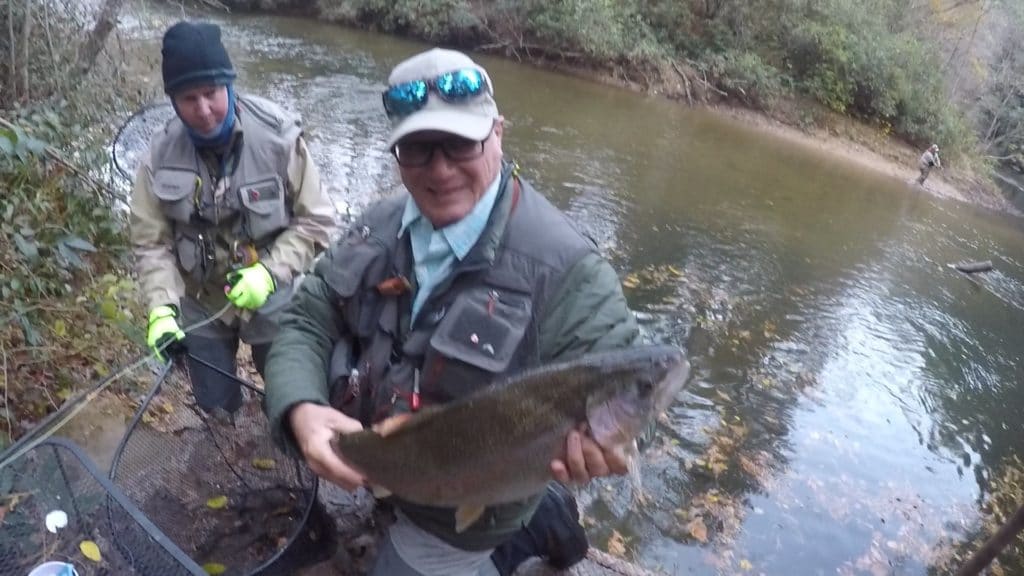 On this adventure all eight of us managed at least one trophy size rainbow or brown trout. Some of us managed to cast to a few Palomino Trout but all they would do was to follow the Glo Ball. So no one managed to hook on one of these unique trout species.

For our third day the weather for us to target some trout on Smith Creek looked like it will not be in the books as the weather reported freezing temperatures. The next morning there was ice so we opted to stay safe and not to maneuver the creek with icy rocks and such. So we had breakfast and headed back to Charleston. The two days of fishing on the Chattahoochee and Soque gave us all memories from catching our first trout on a fly to the more experienced ones actually hooking into a trophy trout. For my adventure was hooking a trophy rainbow on a fly in a size 14 hook.