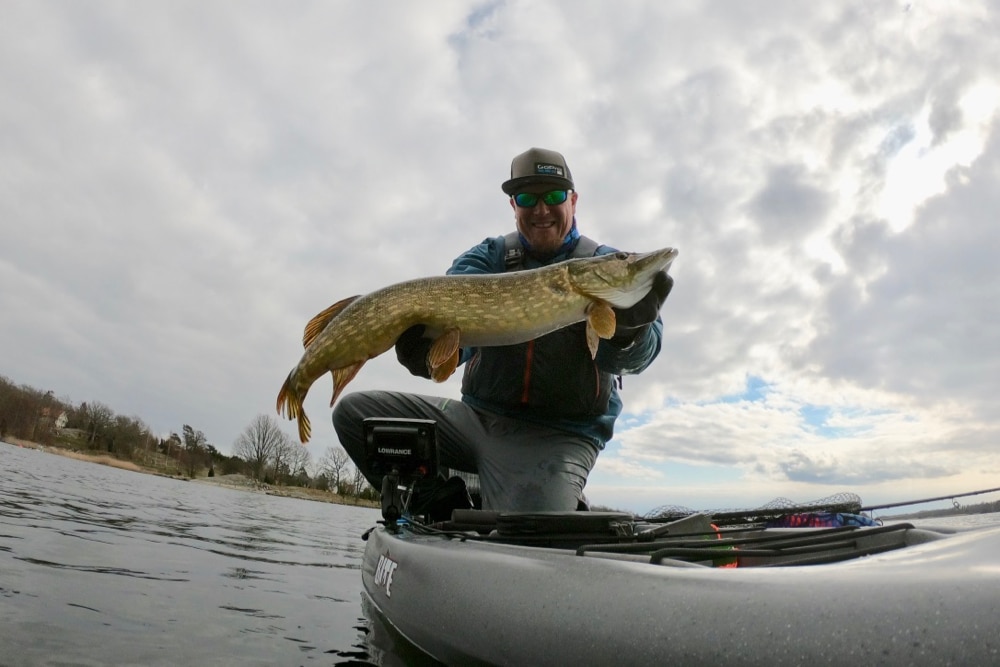 I visit beautiful Sweden at least once a year, either with my family or to see many friends at the Liska Kayak Open. The historical province of Blekinge in southern Sweden is about 400 miles away from me and can therefore be reached relatively quickly. Since you have to take a ferry from Germany and cross the Øresund Bridge, the trip is not cheap, but you will be rewarded with top-class pike fishing! Southern Sweden is definitely a bucket list destination for every kayak angler! 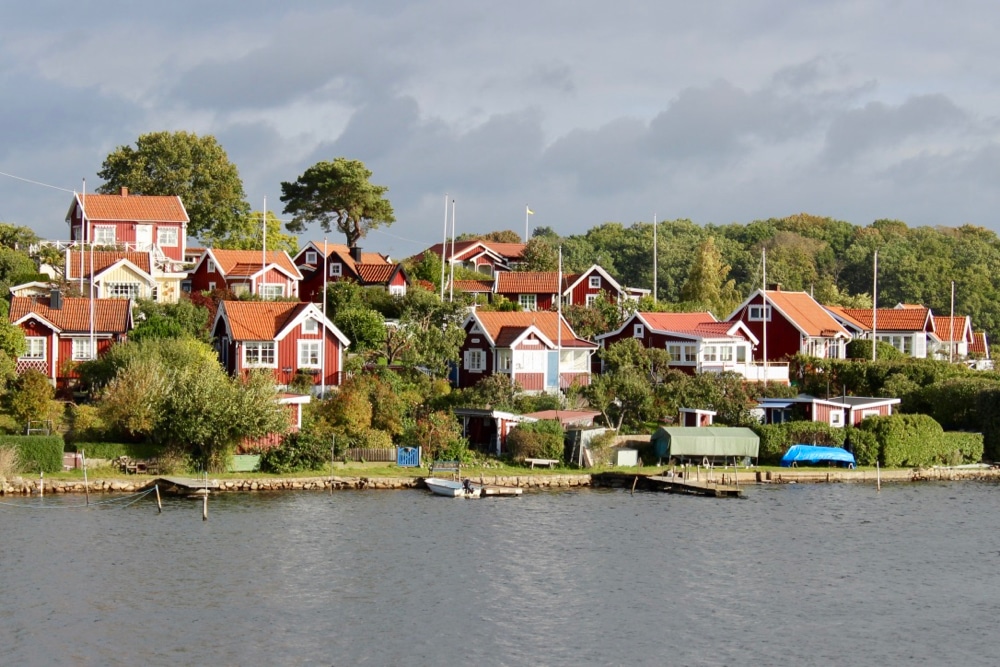 The Blekinge archipelago stretches among almost the entire coastline of Blekinge, from west to east. The many shallow and highly desalinated bays, lagoons, and estuaries along the coast are important spawning and growth areas for several species of fish.
The pike are in very shallow areas and that’s why kayak fishing is so successful here. Where the boats can no longer get there, we use our kayaks to our advantage. Since the water is mostly clear, you can often see the pike from the kayak. A really great fishing with large numbers. It is not easy to catch big pike, but a lot! We have already had real dream days in the Blekinge archipelago, this area is also a real highlight for fly fishermen. 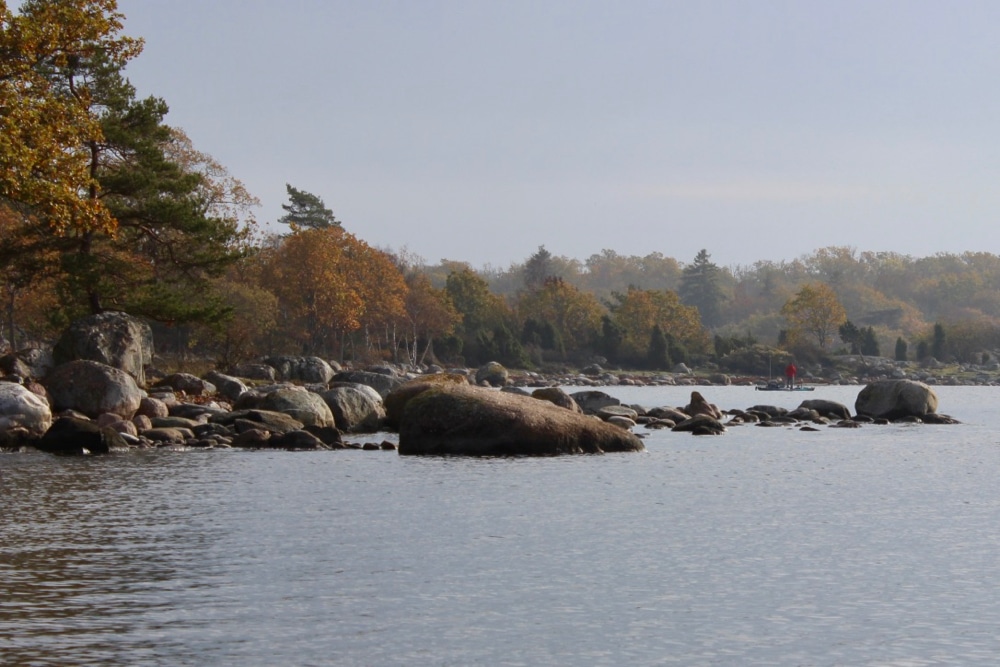 In contrast to the majority of other European countries, “Everyman’s Right” applies in Sweden. This is something very special, since wild camping and making fires is generally forbidden in Europe.

The freedom to roam, or “everyman’s right” (Swedish: allemansrätten), is the general public’s right to access certain public or privately owned land, lakes, and rivers for recreation and exercise. Since 1994 the Instrument of Government says that notwithstanding the right to own property “everyone shall have access to nature in accordance with allemansrätten”. The maxim is “do not disturb, do not destroy”. Allemansrätten gives a person the right to access, walk, cycle, ride, ski, and camp on any land – with the exception of private gardens, the immediate vicinity of a dwelling house and land under cultivation. 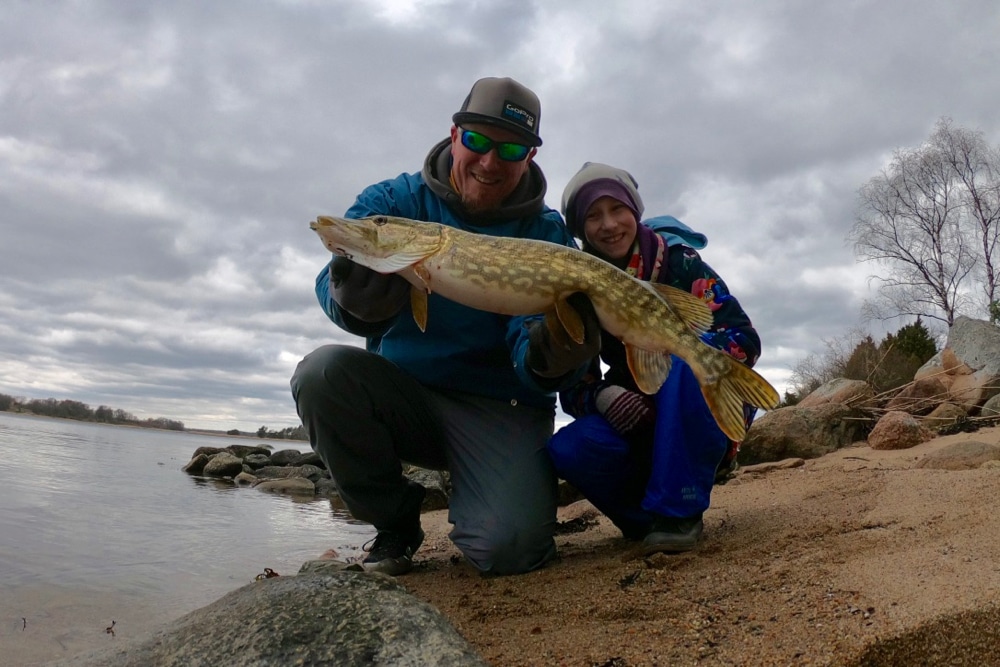 Restrictions apply for nature reserves and other protected areas. It also gives the right to pick wild flowers, mushrooms and berries, but not to hunt in any way. Swimming in any lake and putting an unpowered boat on any water is permitted unless explicitly forbidden. Fishing remains essentially private – apart from on the biggest five lakes and the coast of the Baltic Sea, the Sound, Kattegat and Skagerrak (the archipelago of Blekinge is part of the Baltic Sea, so you don’t need a fishing license there!). It is permitted to drive a car on a private road unless explicitly signposted otherwise. Small camp fires are generally permitted, but in some periods banned by local authorities due to wild fire risk. It is allowed to put up a tent on any uncultivated land for a night or two. That’s why we love Sweden, it can be so easy! 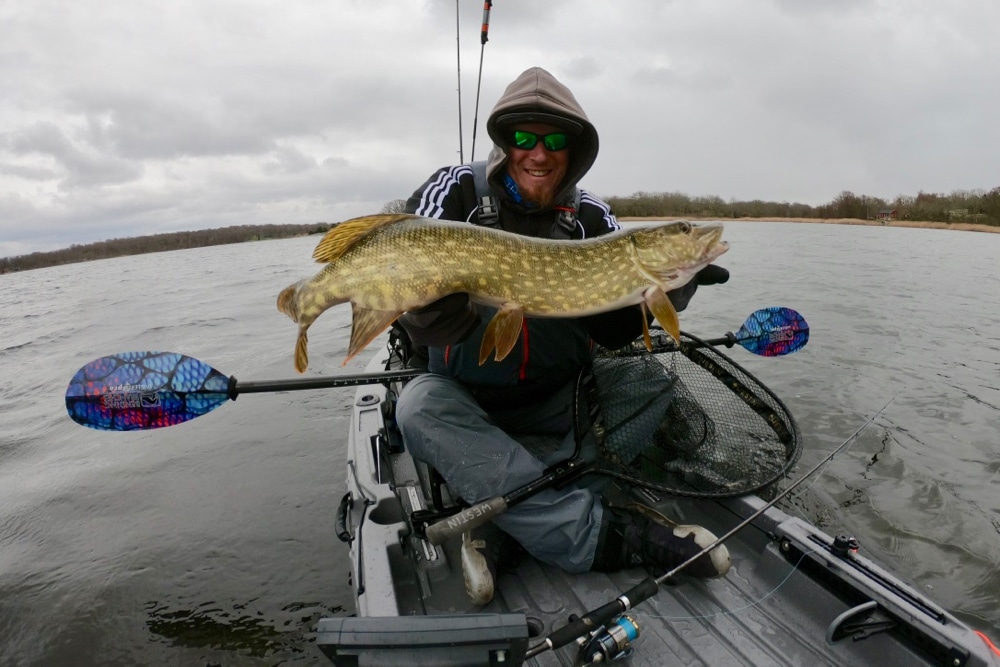 The province of Blekinge also guarantees a wonderful family vacation. The kids can experience and discover a lot in nature and of course also go fishing. A paddle tour to an uninhabited island to make a delicious barbecue is a great adventure for young and old! 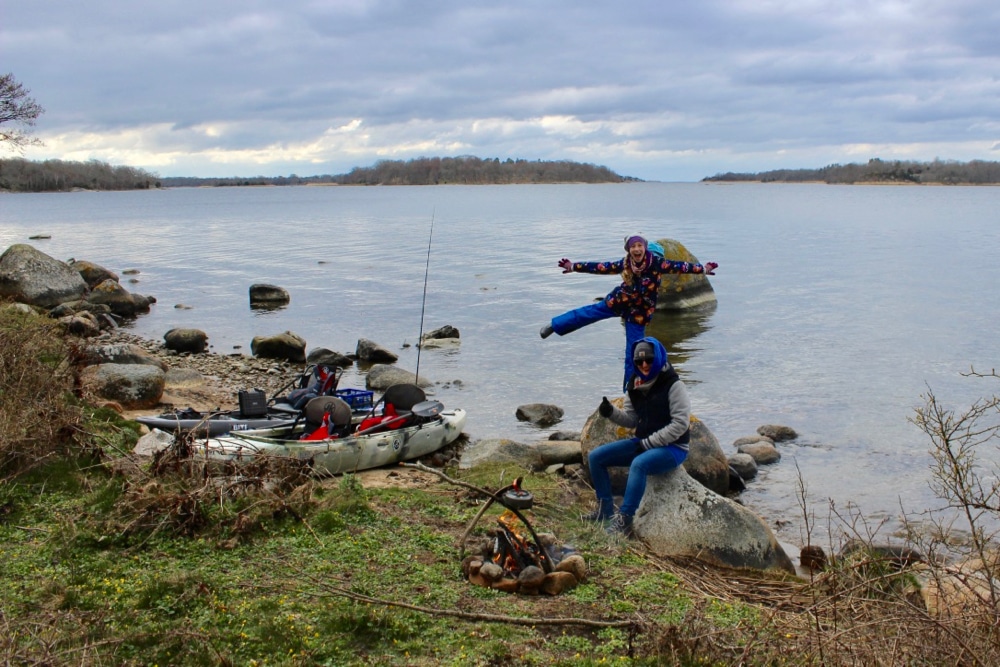 Anyone looking for accommodation in Blekinge should definitely contact Jackson Kayak Fishing Team member Gunnar Ahlström. Kayaks or boats are not a problem for guests. Gunnar is also the one who hosts the Liska Kayak Open once a year, one of the largest and most successful kayak fishing tournaments in Scandinavia. If you want to arrive by plane, it is best to land at the airport in Copenhagen, Denmark, from there it is just under 150 miles to your destination by rental car. 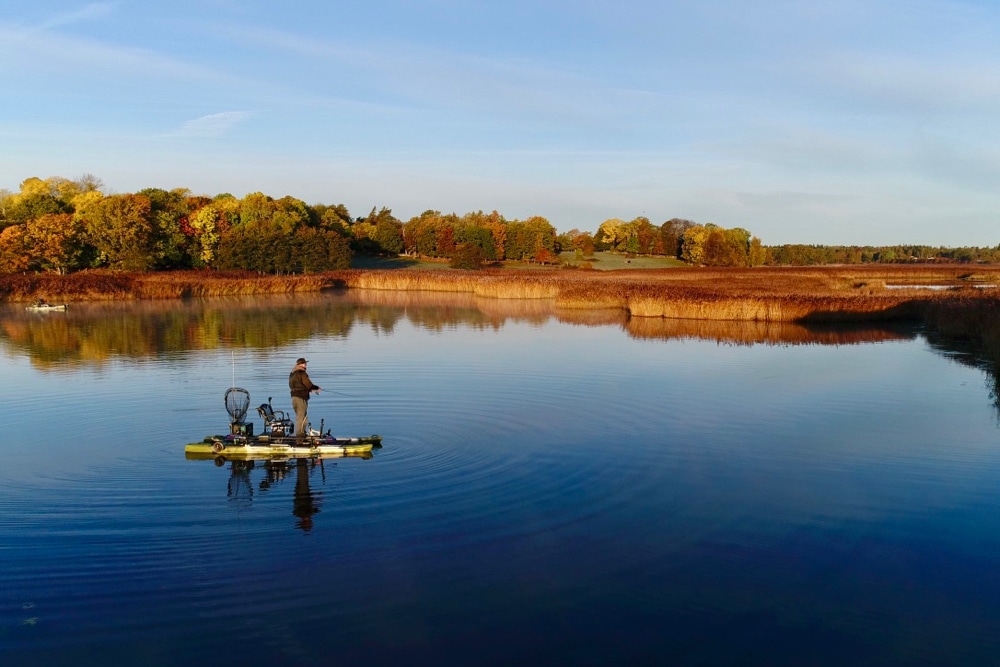 Tips for a holiday in Blekinge:
– You can save money by booking a ferry and the Øresund Bridge beforehand. This is cheaper than buying a ticket directly on site.
– Stick to speed limits, otherwise it can be very expensive.
– The currency in Sweden is Swedish kronor. At gas stations you pay with EC or credit card.
– You do not need a fishing license to fish in the archipelago. For most freshwater lakes you have to buy a fishing license, which is usually also possible online. 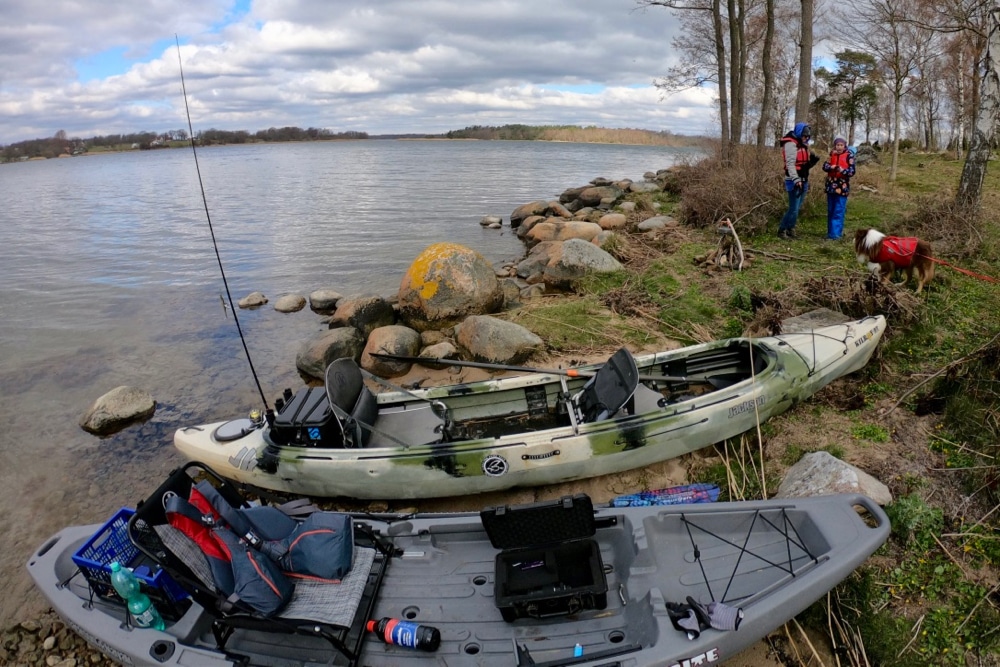 The Liska Kayak Open will take place from October 9th to 11th this year. I hope to see you there! If you have any further questions about the Blekinge Archipelago, send me an email: dennis@jacksonkayak.com. Our Swedish Jackson Kayak Fishing team members can definitely answer any question!