The point of this blog post is to show how my (Joey Monteleone) fishing style and approach parallels that of Jean Wilson who is casting 1000 miles away from my home waters in Tennessee. Jackson Kayak team member Jean Wilson started freshwater fishing around 2012, with multiple trophy fish catches she offers this, “The ones that I have both measured on the scale or guesstimated from their link/girth would be around 25 largemouth bass at 10 lbs. The largest so far is 15 lbs., then 12-12, and numerous 11 pound plus…I am fishing relatively shallow prairie lakes and spring fed rivers. The double digit fish that came on the lakes were caught in the 3-9 ft. depths and on the rivers it’s been 1-5 ft. depths. I’ve caught multiple giants fairly closely together in time, but then there will be times where they are far and few between. That doesn’t necessarily mean that they’re not there but rather that I’m not catching them! As far as cover, the lakes are heavily vegetated in the warmer months (thick fields of lilies, snot bonnets, fanwort, milfoil, grasses) and less so in the cooler parts of the year (dying lily stalks, grasses, hydrilla). I’m finding bass in the shade of the lily fields in the bright light middle of the day and on the weed edges or in the open during low light times. 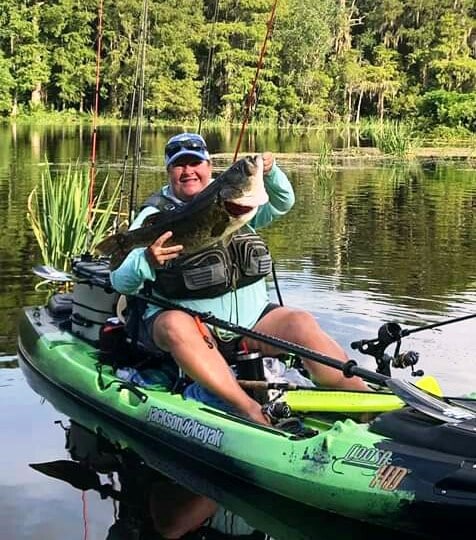 In my own cases I only have six bass topping ten pounds but multiple fish ranging from five to nine pounds. I document my catches and have for 40 years and my catches reflect more than 1500 bass over the five pound mark, and about 15% of my trophy fish are smallmouth bass. My findings again are similar to Jeans, a majority of my big bass cane from a magic depth of three to eight feet of water. Lots of the large fish were river residents and were taken from around heavy cover in the form of submerged wood, weed beds and points. My records indicate April is best for numbers of fish while March and October are great times to target trophies.
Jean explains a little more about her Florida findings, “cover for the spring fed rivers is pretty constant since the water temperature is also constant year round. Eel grass, wild rice, overhangs of trees and bushes and the natural hedges formed by numerous plants along the bank. 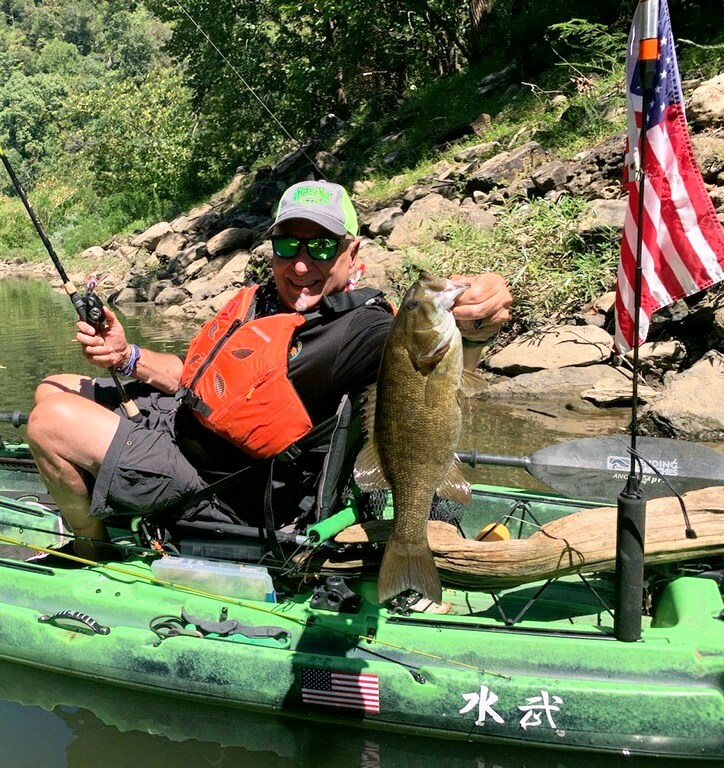 I prefer a common sense and intuitive approach to finding fish. My electronics amount to a cell phone, a GoPro camera and a 10 dollar watch. While I don’t use electronic aids I monitor surface temperature and pay close attention to natural signs. While not opposed to tech assistance too often I believe people separate themselves from their senses and let technology take over.
Jeans view, “I’m the same as you in the non-use of electronics. I actually have a fish finder that I won from River Bassin that I’ve never even taken out of the box. I know they are used for different reasons like depth, water temperature, depth, water temperature, GPS and tracking and I eventually would like to learn how to use it for other areas and just to know how. But I really think that I have taught myself so much from just trial/error and constant observation to read the waters and the fish and the simplicity of that really appeals to me. It’s another reason that I enjoy the paddling and less “stuff” on the kayak. When I’m back in a wild creek enjoying the solitude I love the idea of experiencing something just like ancient people did.” 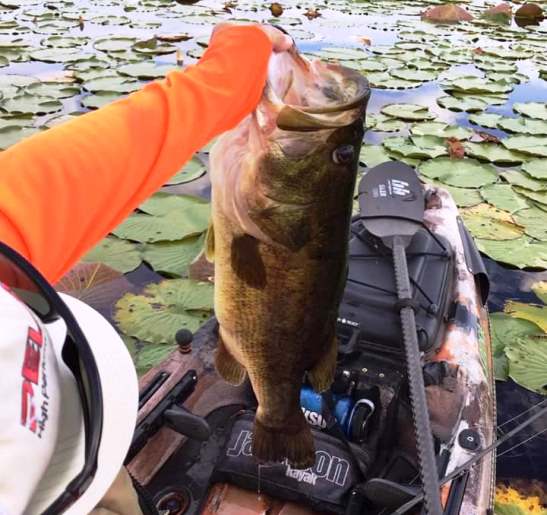 With many miles between use and a longer growing season for the Florida bass another similarity we share is what’s tied on the end of our fishing lines. Standard for me as I paddle out is a jig, a spinnerbait and a buzzbait. Options are a plastic worm or flipping tube, shallow or medium running crankbaits and spinnerbaits.

Jeans bait choices, “I try to experiment with different lures so that I’ll be ready for different waters. But mostly I’ll use weedless soft plastics that I can buzz, wake and drop.”

Both of us are in kayaks the majority of the time and center our search on bass. For me living in the south I get to test the waters for largemouth, smallmouth and the spotted Kentucky bass species. We paddle and go armed with just a few rods and a small selection of lures.

So from Florida to Tennessee the weather, topography, available species and conditions are different but the application of each of our similar styles continues to produce good numbers and trophy size bass.