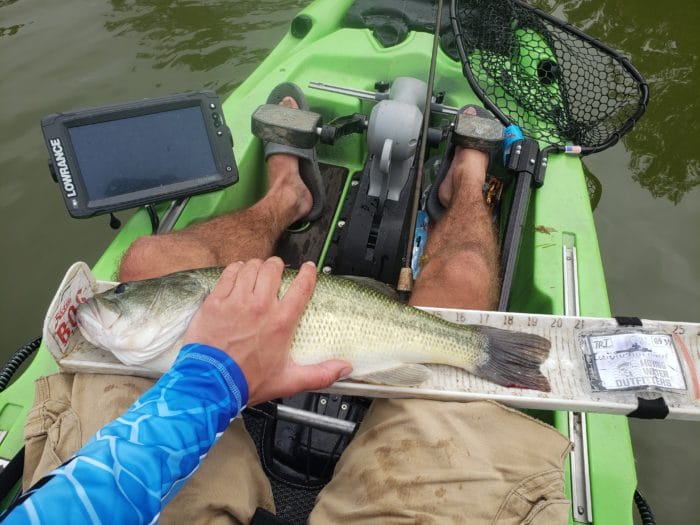 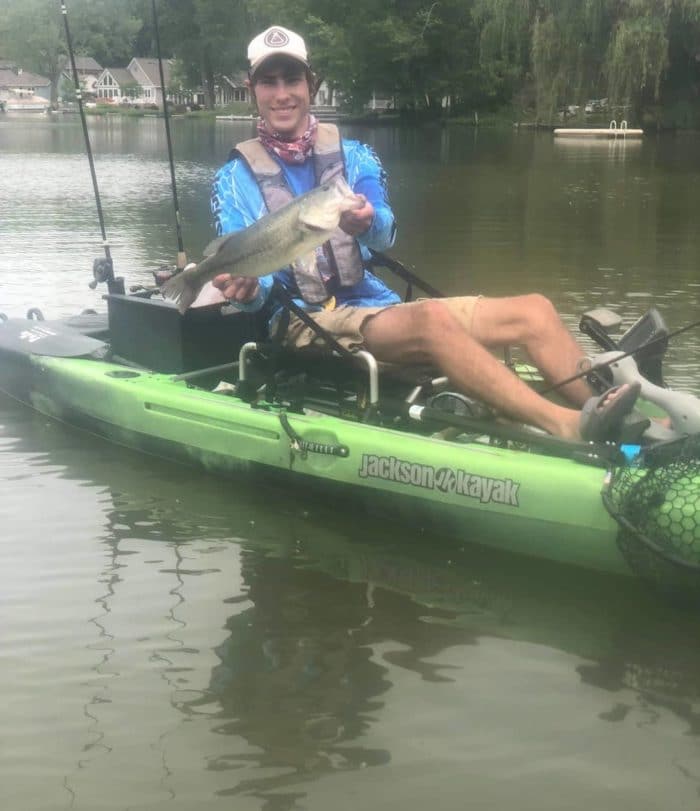 Anyone who has fished a tournament where there were multiple lakes allowed knows the stress of choosing the right one. Lakes that are separated by even just a few miles can vary significantly in their ecological composition and therefore the size of fish. For this particular tournament we were put on a chain of lakes in northern Indiana with six different lakes being eligible to fish. I was personally pretty intimidated by the number of lakes that I could fish considering that I was working with very limited pre fishing time.

Two weeks or so prior to the tournament one of my good buddies and I made the trip up north to get some practice in. We picked the most central of the eligible lakes since it was well within driving distance of the other lakes should we choose to switch. The first lake didn’t yield much of anything in terms of size but had a seemingly endless supply of 10-11″ fish. Unfortunately for me those little suckers don’t win tournaments so my buddy and I moved on. As we hopped between lakes we were quickly realizing that all of the lakes had a common theme: lots of fish but they’re all small. 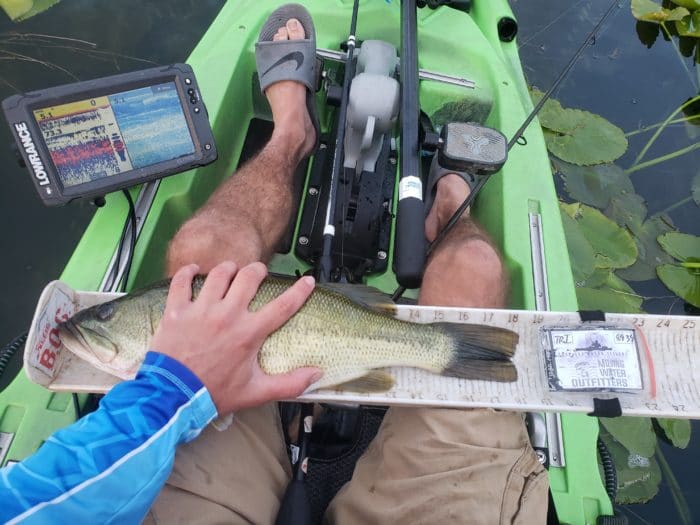 Fast forward to the day before the event I hit the water once again to try the last two lakes that I hadn’t been on before. The first lake I stopped at was called Crooked Lake. Just like every northern glacial lake it had lots of weeds deep drops and clear water. After about ten minutes on the water I had deducted that this lake followed the same pattern as the other lakes in the area. With this in mind I fished on. As I moved about the lake I threw a variety of baits. The ned rig spent most of the time in my hands but I mixed in a tube and fluke to try and find a pattern for the bigger fish. For the entire day I caught fish after fish but only a handful that even came close to being submission worthy in a tournament. At this point in the day it was getting late so I started working my way back to the ramp. As I was hastily pedaling my Coosa FD back to the ramp I saw a very appealing patch of grass on my graph out in about 20 feet of water. I spun the yak around and threw my tube as far back as I could and let it sink down. As I drifted with the wind I could feel the subtle tug of my tube coming through the grass I had just marked. I continued to focus on the gentle and periodic pull of the grass when an abnormal thump in the line sent adrenaline coursing through my veins. I swung my rod back hard and fast only to have it stopped dead when I pulled into the full weight of the fish. I immediately knew this fish wasn’t another dink. I fought it up from the depths and to my delight it was a fat 17.75 inch fish. I made the decision to fish that lake again for the tournament right there on the spot with the fish still in my hand.

The next morning I stood over my kayak and looked out at the lake. After that one decent fish from the day before I just imagined the other big fish in the lake sitting out deep just like their little friend I had caught yesterday. Eventually launch time came so I kicked the flex drive down and took off across the lake to the dock that was my first spot. The plan was to fish shallow early in the morning and then move out deep once the sun came out. I sat there in front of the dock checking my line and rigging up my ned rig in just the right way. The clock on my phone hit 6 and a second later my ned rig hit the water a few inches from the dock. A few casts later at the same dock I landed my first fish of the tournament. It was almost humiliating to take a picture of 12.25 inch fish in a tournament but I bit my tongue and did it. From there I began working the bank. I didn’t make it far before another fish fell for the ned rig. Unfortunately for me that fish flipped off of the board without a picture. Since it was small I didn’t care a whole lot but it never feels good to lose fish. As I approached a patch of lily pads I saw a large boil from a fish just below the surface. Instinctively I threw my lure to it only to miss the fish when it rolled on my bait. I picked that spot clean but that fish never showed back up. A little bummed out I proceeded to continue to fish the lily pads and no more than a dozen casts later I get a bite up in the pads. On the hookset the fish made a huge splash and got my heart beating fast. Fortunately the fish took off for deeper water and I was able to slowly fight it up and into the net. I put that fish on the board and felt butterflies when I saw the tail touch that 18 inch line. With that fish alone I was already setting myself up for a good finish in the tournament. I stayed in that area for the next few hours and filled out my limit with a few 12 inchers and a nice 17.25 inch fish.

As the day drug on and the sun got higher up the bite slowed down significantly. I worked most of Crooked lake and had only upgraded one of the 12 inch fish to a 13 incher. By this point in the day there were a lot more anglers on the lake. Several competitors had changed lakes. In the hunt for new and unfinished water I found myself pedaling through the canal on Crooked lake to a tiny little cove like lake called Little Crooked lake. I had never taken a cast in here before even in practice. The water in crooked lake was muddy and had low visibility so I stayed out up until this point. But with me running out of options I headed back. My good friend and tournament partner followed me back there and we proceeded to fish the few docks in this tiny lake. I went ahead of nick and fished the opposite side of the area. Since the lake was so small we were within shouting distance of each other. A few moments after I started fishing my first dock I heard an excited yell from the other side of the lake. I turn around to see nick holding up a 19.5 inch tank! I was pretty jealous as at that point I had just been knocked out of the lead by an angler on another lake. While nick photographed his fish, I kept skipping my ned rig at the docks. As I was approaching the next dock down I saw the perfect line to skip my bait so I let it fly. Unfortunately for me, my skip hit the water too early and the bait bounced high and slammed the metal float of a pontoon boat. My bait sank straight down as I listened to the metallic ring from lead on metal. I was still coasting towards the dock so I scrambled to recover and reel up all the line in my lap. When I finally reel down on my bait I felt the unmistakable tug of a fish. I set the hook and chaos ensued as I did battle with a giant bass right at the side of my kayak. I somehow drug that fish into my net and scored it at 19.75 inches. That fish put me back in the lead but I still had a few hours to fish and I have some guys right on my heels. I finished out the tournament back in that spot and with only a few minutes left I landed another 18.25 inch fish to finish off my day. Heading back to the ramp I knew that I was going to be hard to beat after a day like that. 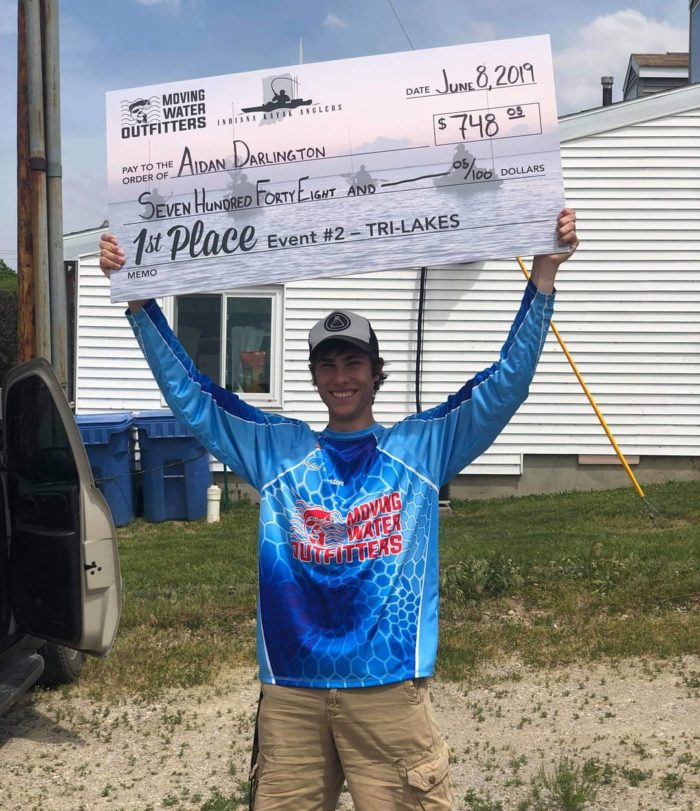 With all the results tallied up I was fortunate enough to have came out on top with a five fish total of 87 inches. In all honesty that day of fishing was one of the weirdest and most exciting that I have ever had. No one, not even I knew that this lake could produce quality fish In the numbers that were found during the tournament. I was just lucky enough to find four of them and take the win with a 10 inch lead over second place.