Fly Fishing from the Liska 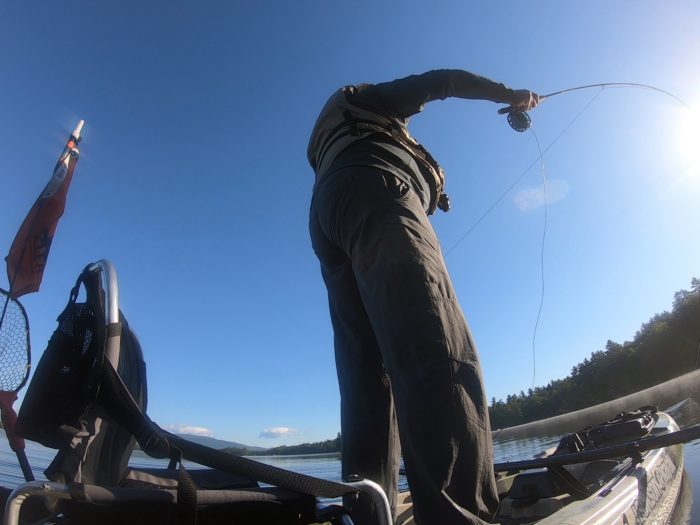 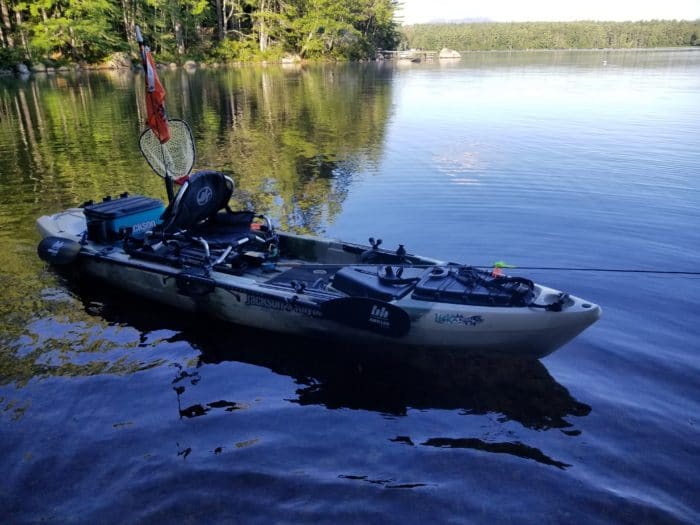 The Jackson Liska is a great kayak for the all around angler. Not only is it a great kayak for the angler that uses a casting rod setup or a spinning rod but the Liska is also a fly fishing capable platform. There are a few obstacles on the kayak that might cause some line management issues when either standing or sitting while you false cast the fly line. The three areas are the Nylon Wing (T) knob that secures the seat in place, another is the hinged center hatch lip just under the knob that secures the lip, and the foot pegs. If you have opted to add the accessory of the under seat stash sliding tray depending on the positioning of the seat the protruding part of the tray could also cause some line management issues. 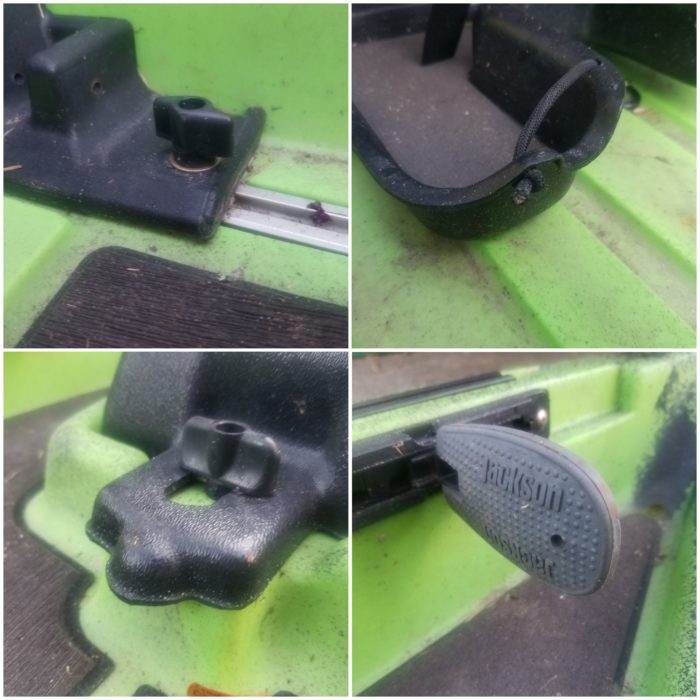 The four areas that I have noted some concern about will be the areas that I will be monitoring while I fly fish from the Liska. Also I will note if I experience any other areas that I had issues with while casting the fly rod. I will be testing the line management capabilities in the sitting position and while standing. 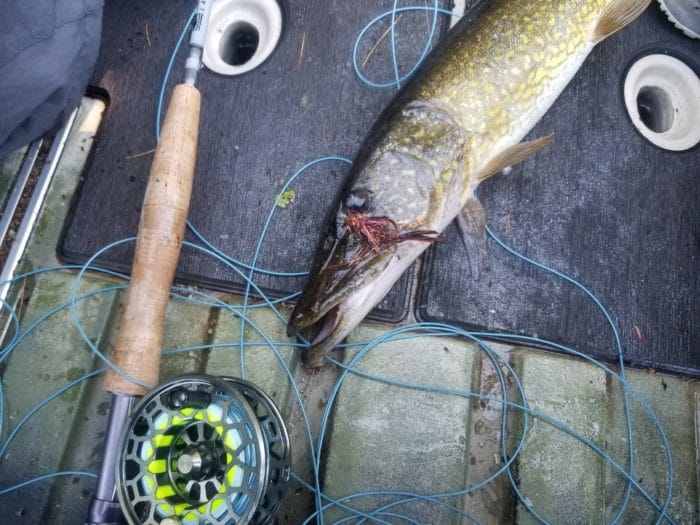 I will start with casting a fly rod from the sitting position as this is normally how most fly anglers will fly fish from a kayak. Casting from a sitting position is not new especially with the concept of fly fishing from tubes. There is a challenge when casting from a sitting position besides the line management issues that I identified earlier; you will need to add yourself to the equation as an obstacle. What I mean is that while you are casting you are shifting your feet and might actually place four foot on top of the coiled line between your legs. Another challenge that I have noted is that my casting distance is not as long when compared to me standing. Since I’m fairly new to fly fishing there might be variables in my equipment that I’m over looking for example fly line design or maybe even the action of the fly rod just might help in a longer cast. I will need to study this a bit more. 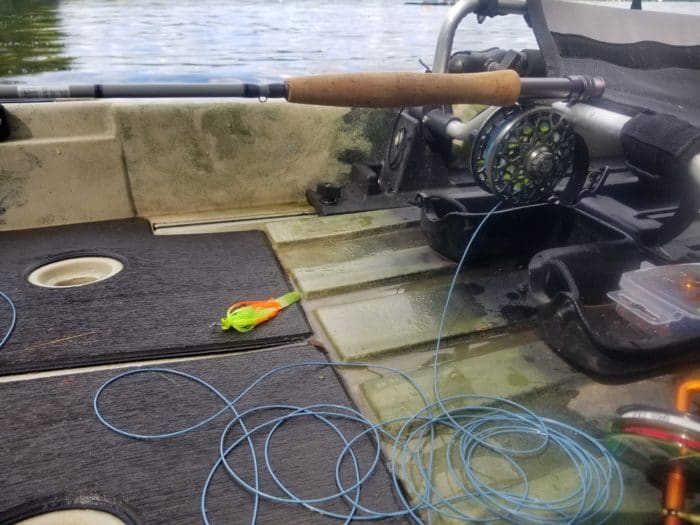 Besides me being the number one issue for line management I did experience occasionally my fly line would coil around the nylon wing knob that secures the seat in place. My plan to eliminate this issue will be to replace the existing nylon wing knob with a similar one that is used on the Jackson Mayfly or the YakAttack LoPro Wing Knob. Another area that created some problems dealt with the sliding tray that is positioned under the seat. My experience with the sliding tray dealt with for some reason the bungee cord knot and the fly line would create me a slight issue. For some this might not be an issue as the seat might be positioned more over the sliding tray. My option would be to remove the bungee cords that are at the front of the tray. 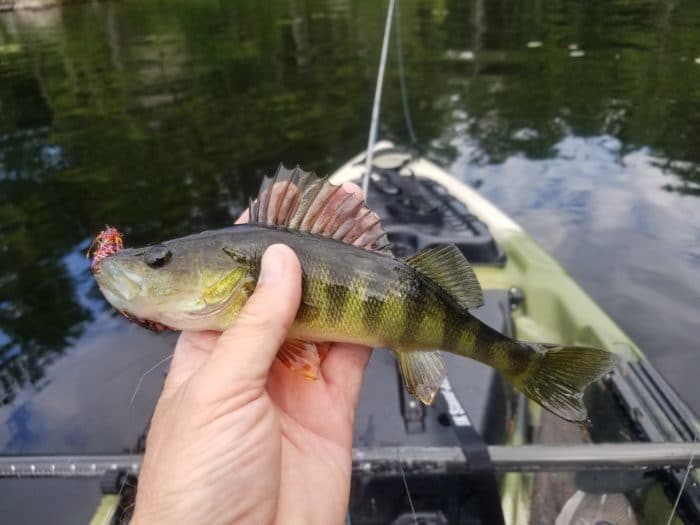 While there is getting to be more anglers that are standing and pitching lures to their species of choice; there are a few fly anglers that are still a little hesitant about standing using a buggy whip. When I started fly fishing I use to put a lot of body movement into my casting; which by some more experienced fly anglers to be very inefficient and bad form. My casting form actually prevented me from standing in a kayak to enjoy this form of fishing. Now that I have been improving my technique by concentrating on using my forearm only my fears of standing in a kayak to cast a fly rod is gone. While standing I did not notice any issues with line management. So for me the slight overhang of the center hatch cover or the foot pegs created an issue for me while casting the fly rod in the standing position.

For me the Liska has proven to be a great fishing platform for fly fishing. The kayak has a very clean deck that helps with managing your fly line. For storage of your small fly boxes the sliding tray under the seat, the center hatch or the seatback pouch are great options for that. Fly rod storage is an issue as the Liska is not designed for that type of the rod however the Liska does come with the YakAttack Omega Rod Holder which will secure a fly rod. I preferred not to use the Omega rod holder but instead position my fly rod between my legs with the butt of the fly rod sitting on top of the seat frame. 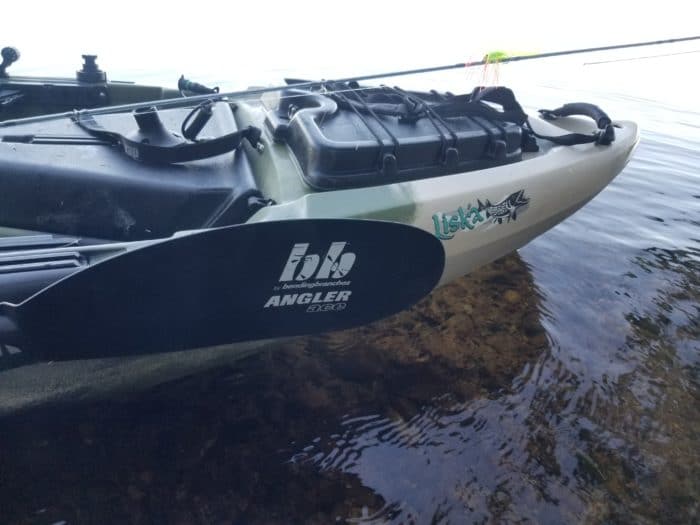