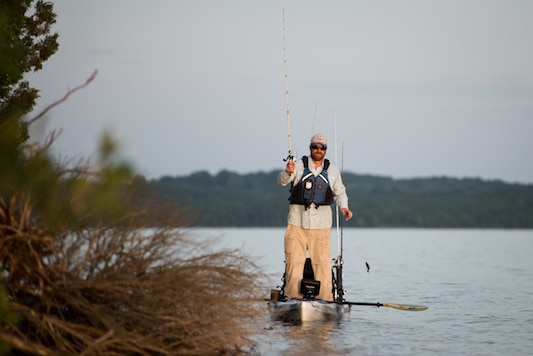 I recently participated in a local kayak tournament. It was on Old Hickory Lake in Nashville, TN. I had prefished and found some decent fish on a steep bank with some docks on it. We are allowed to get on the water and to a spot up to an hour before first cast. I ended up working later than I had hoped, but was able to start the 1 and a half mile paddle to my spot around 30 minutes before the tournament started. I was about half way there, paddling across a main lake point when I noticed a bunch of bait flickering along some grass on the side of the point. As I was watching the bait, a large wake flew through the bait and shad flew in all directions trying to escape the predator. A few seconds later it happened again and a 2-3 lb largemouth flew out of the water amongst the shad. I immediately changed my game plan and looked around to make sure no one was nearby. I had the point to myself, so I patiently awaited the 20 minutes before the tournament start. The clocked struck 5:15 and I whipped a spinnerbait parallel to the grass that the bait was holding too. It didn’t make it 5 ft when it got slammed and a solid 15.5” bass was in my net. Within 10 casts I had my 3 fish limit. This bite lasted only about 20 minutes and soon the bass and bait were gone, but in that 20 minutes I upgraded a few fish and later on in the night I upgraded 1 more at my original spot. My bag was large enough for a 2nd place finish, only ¼” behind first. 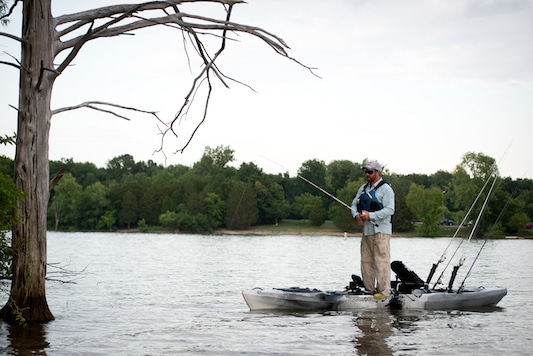 If I had not been aware of my surroundings and looking for “signs” I never would have seen that bait and the bass feeding on it and I probably wouldn’t have done very well competing that night. A sure way to increase your odds when fishing is to be constantly on the lookout. There are many things you might see that will give reason that there might be fish around. Also don’t be set in stone on your original plan. I honestly still almost left the fish on the point to go to my original spot because someone else was heading in that direction and I didn’t want them to beat me there! But luckily I overcame my stubbornness and stuck to what I saw that was happening right in front of me and cashed a check because of it. So be aware of your surroundings, look for sign, and be flexible in your day, whether you had a plan or not!