Racing the RG and Nirvana in Richmond 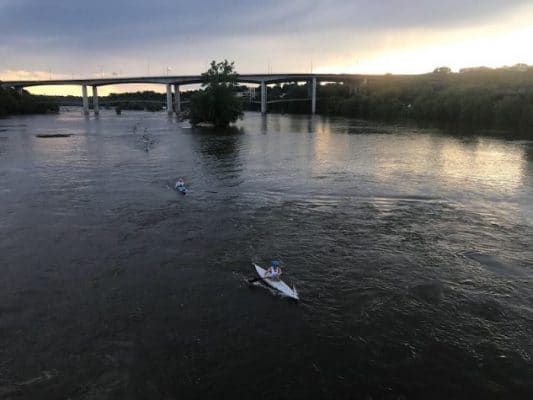 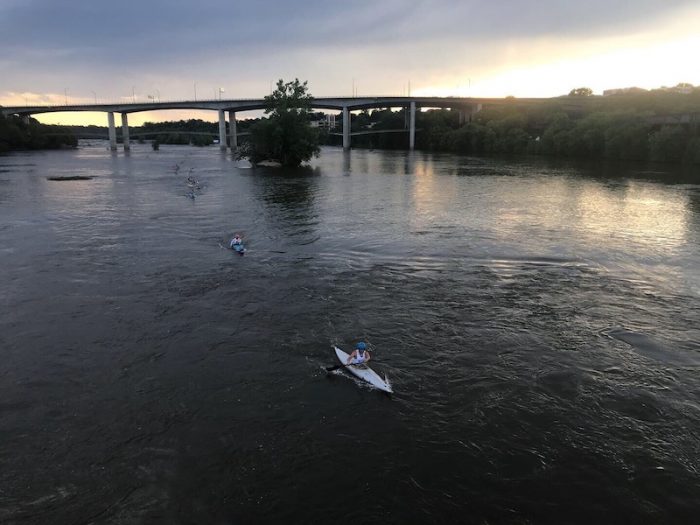 I had a great time training and racing in the River Rock Festival in May in Richmond on the James River. The events take place almost all week and I managed to make it to the first event for the downriver race which was pretty crowded with familiar faces. There were alot of fast boats like Wavehoppers and old tried and true longboats like the Mirage. 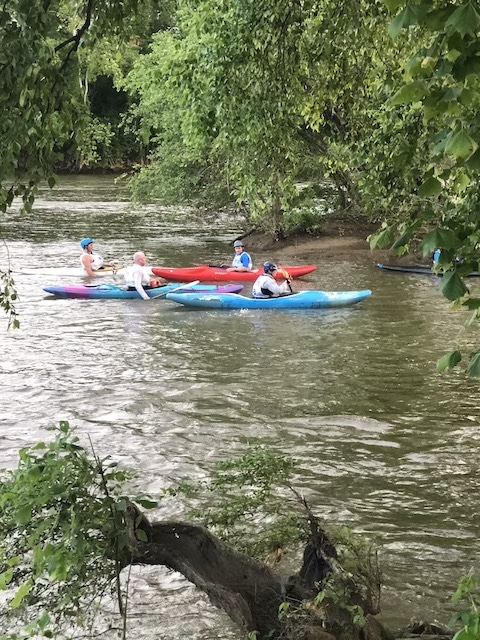 I did spend three days training with an old slalom boat I have but pretty quickly started to do downriver runs in the Karma RG. The Karma RG is fast and maneuverable and I stow extra gear in the stern. I really trust this design and would take it anywhere. I like to paddle it anytime at any level as its has that old longboat feel but offers new design quality’s and features. In the past it has made a good crossover to saltwater paddling, touring and also racing. 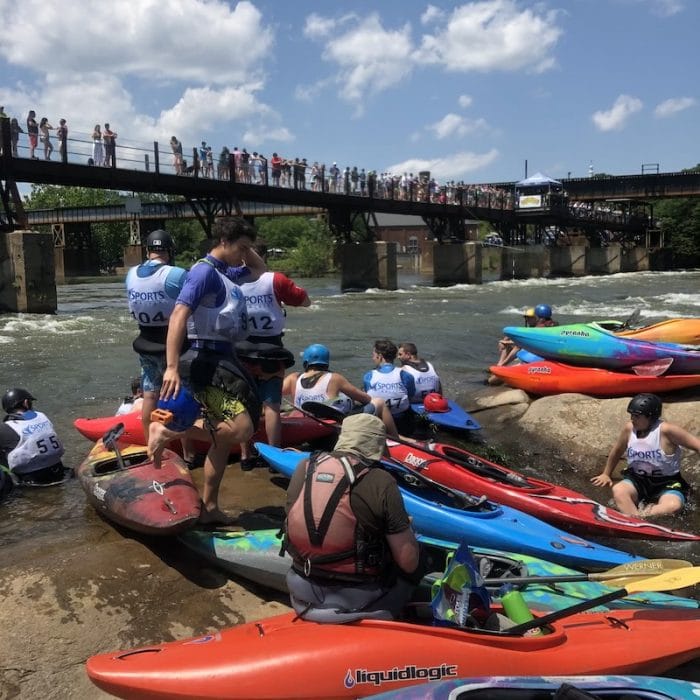 My training runs turned into play runs pretty quickly as it is hard not to want to play and surf and squirt down the James. Getting back to the race on Friday night there were quite a few paddlers including stand up paddlers. I ended up started well while getting smashed in the funnybone by a wavehopper paddler and that is what I saw paddle away from me was three wavehoppers and a sea kayak. 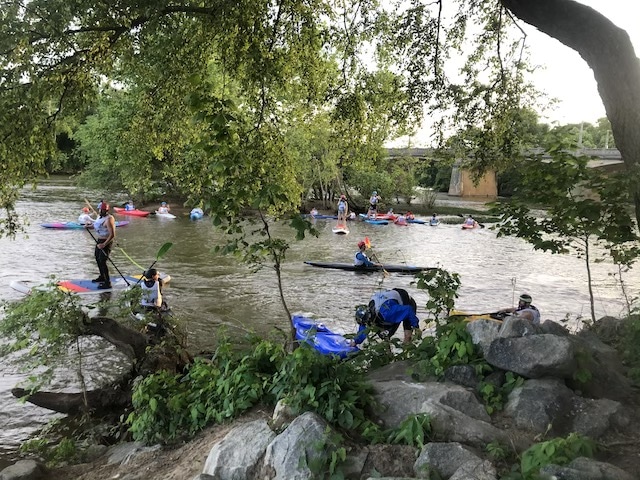 Racing is fun because a paddler doesn’t know who they are going to be racing until you are in the race. It turns out I found this out pretty quickly as a young paddler named Adam in a white Mirage slowly made his way around me above the whitewater in the flat water. If I remember right I passed him again in the whitewater but he passed me again.

Somewhere near the bottom of the whitewater I passed him again and knew it would be a race to the finish in the flatwater to the takeout. People at the finish line were yelling to him to paddle hard but we both have the same name so I knew they were yelling to him but it was fun get encouragement. With a small amount of gas left in the tank I tried to push but he slowly passed me again and finished one second ahead of me. We both placed really well and I was definitely happy with the start I got and run to the finish. 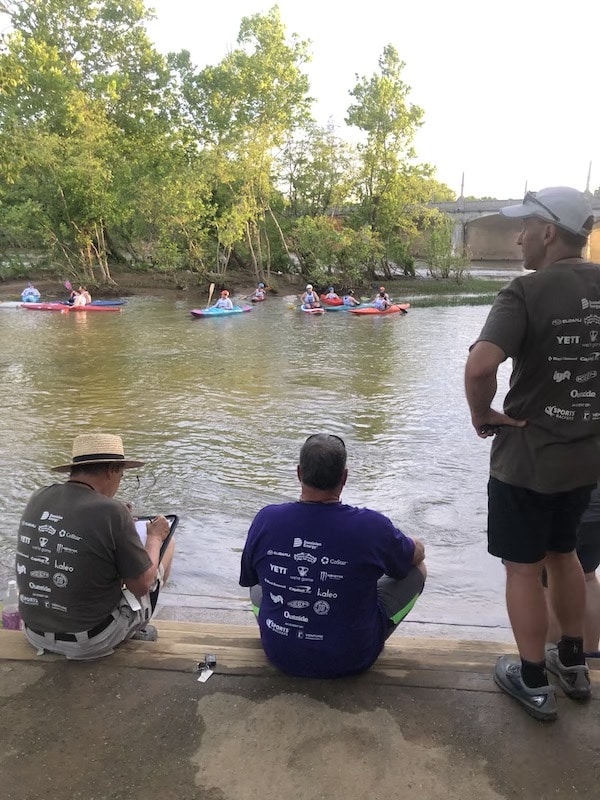 The River Rock boater cross didn’t pan out well for me but it was a fun course for sure and i look forward to other races coming this fall! 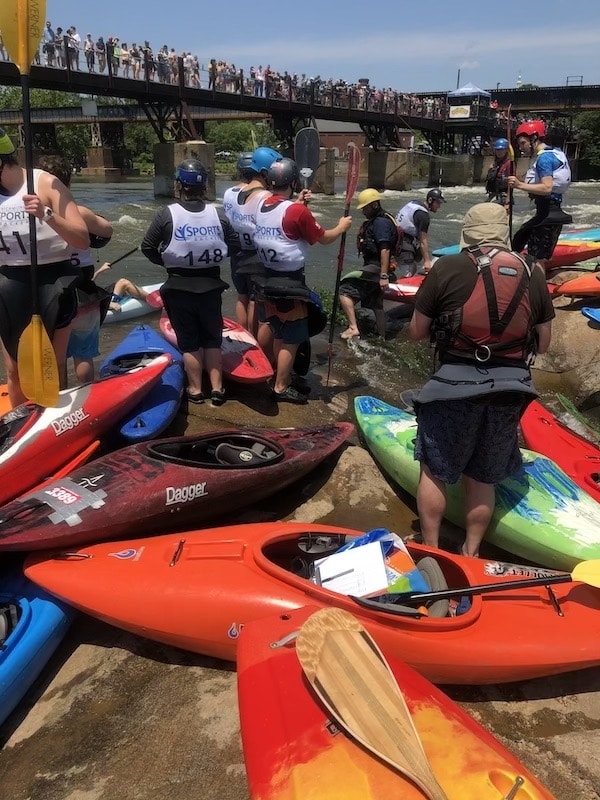 Besides racing I was able to make it over to the playhole at NOC a few times this summer and also to the Ocoee River and had a really fun time and can’t wait to back. The hole at NOC is awesome and whoever designed it did a good job. The feature is deep and retentive ever for longer boats and uncrowded from what I’ve seen so far……..