A Look Back Into Living A Dream 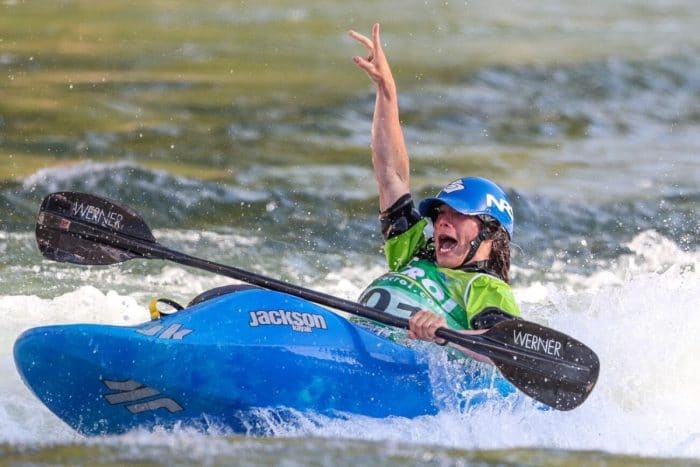 The 2019 ICF Canoe World Championships was an experience that I will never forget. It has been a journey that I started four years ago, when I first put on my dad’s gear and jumped into his whitewater kayak.

Flash back to 2016, I took my first freestyle clinic with Jez Jezz, on the Nantahala River, a birthday gift from a local kayaking friend. In the clinic, Jez taught me how to loop which was the start of wanting to learn more tricks and duplicate that feeling of flying in the air and flipping through the water. Later that year, I competed in my first competition at the NOC worlds hole, placing 6th out of 10 cadet boys, scoring a loop and style points. Knowing I could do better, determination was my new keyword and goals of increasing my whitewater skills to reach a higher level of performance, becoming the best paddler that I could be, was set in place.

In 2017, I was given my first JK Rockstar. This boat, allowed me to progress in my freestyle kayaking abilities even more than before. Then, in three months’ time, I won the Cadet National Championships that was held on my home river, at the RushSouth Whitewater Park, in Uptown Columbus, Georgia. This was accomplished with commitment and hard work, a joy for kayaking, my coaches sharing their knowledge, sponsors believing in me, strength from God, and support from my family and community of friends.

Fast forward to March of 2019, and earning a spot on The USA Freestyle Kayaking Team, for the Junior Men’s Class. This was a goal that I set for myself and strived hard to reach. Making the team only pushed me to dig my feet in harder with training. To gain further experience with competitions, our family set out in our RV, for the Colorado tour. Coming home one day before flying out to Spain, unpacking and repacking, I was ready to embark on living out my dreams. Arriving in Sort on the 13th of June, I felt right at home on the newly constructed hole that was built for the World Championships. This was a fast and powerful feature and each day came with new water levels and minor tweaks to the hole, making it a slightly different feature daily. Being a paddler that can quickly read a feature and adapt to changes quick was important to succeed here. I choose to focus on the positive, especially on days that I felt defeated by the shallow waters. 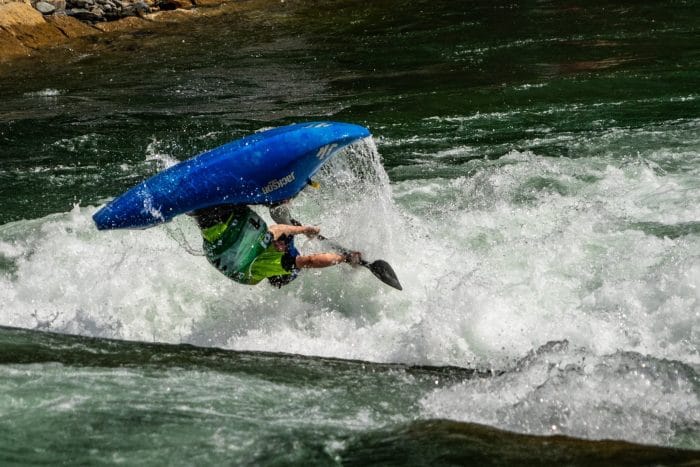 The reality of being a paddler for the United States of America at the Freestyle Kayaking World Championships started to set in as the grand stands were being set-up and all the participating Countries’ flags were flying freely in the warm air of Sort, Spain. After a week of team training, mental preparation, video reviews from my coaches, attending the Junior Camp sessions, and soaking in the encouragement from my family and friends, I was ready for Prelims. The Junior Men were the first of the K1 surface classes to compete and all 35, of the best Junior Kayakers in the World, brought their A-game. I went to the competition with a clear mind, focused on my ride and making both of the two, 45 second rides count. Scoring a 951, after my first ride secured a top 10 finish and moved me into the Semi-Finals. Four long days later, I competed in Semi-finals, placing 3rd, and a chance to podium in finals, scheduled for later in the day. 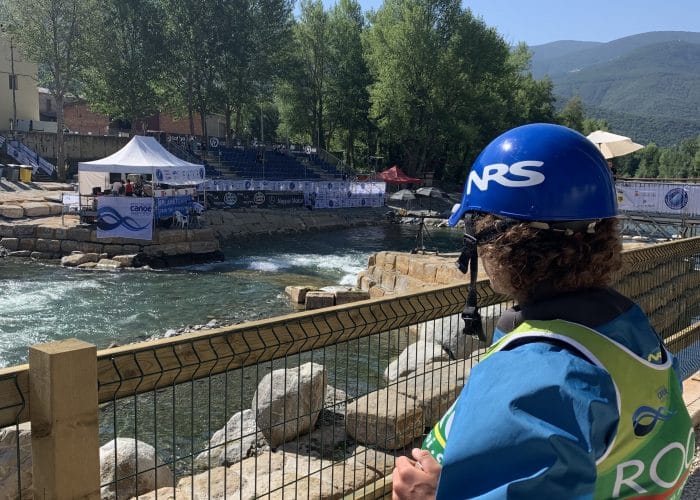 Getting focused and looking over the feature before the competition.

My head spun, as I took in this beautiful achievement of meeting my goals of kayaking in the World Championships. Walking to the feature, my mom hugged me and with tears, she again expressed how proud of me she was. Feelings of excitement rushed over me, getting checked in, putting my boat in the water, reflecting on this dream to be here alongside my two USA and Jackson Kayak teammates. Warming up, I could hear the announcer, the music, and the crowd. However, knowing the mental game is just as important as the three, 45 second rides, I took a deep breath and composed myself. Staying focused to just do my best ride, I closed my eyes, envisioning my tricks in the feature, and taking the advice of my coaches – believing in myself that I could do this. I could hear the crowd roaring as the announcer said my name, but as soon as I hit the feature the sound disappeared and it was just me, my boat, and the hole. 45 seconds went by in a flash and my first ride was done. All the sounds came back and I threw my hands up to the sky, as I had completed the tricks I wanted and threw down my biggest score from all three rounds of this competition. The score came In and it was 960 points.
Beyond pumped at accomplishing my personal best score, I knew I still had 2 more rides, as well as 4 other amazing paddlers left to go. I regained my focus, went back up to the top of the feature for my next runs. Hitting some epic tricks, however not improving on my second or third run scores, but still remaining on the top seat. After my third run, I sat anxiously in my Rockstar 4.0 and waited on two of the best paddlers in the world to go, for their final chance at the World Championship Title.

Thankful and excited with my personal best of 960 in this feature. Photo by Bence Vekassy

The onsite jumbotron, not only showed a close up view of each paddler’s runs, but reflected a real time and unofficial score as each trick is performed. Once the ride is over, a heartbeat sounded as the score went up and down, reflecting the judges’ decisions. As I watched all this take place and then heard the announcers say our new Junior World Champion is Mason Hargrove. I couldn’t believe it, all the hard work and hours put into training had paid off and my dreams had come true. I looked over and saw my mom running to the waters edge, crying. I knew how proud she was of me for just putting in the effort to get here. She jumped into the water, I hugged her tight and told her how much I loved her. From there I was greeted with hugs of congratulations from my friends and coaches. All I can do is give thanks to God, my parents, my friends, my community, and my sponsors including Jackson Kayak, NRS, Whitewater Express, Uptown Columbus, Synovus Financial, and Boofaloop. Without all this support, none of this would be possible. 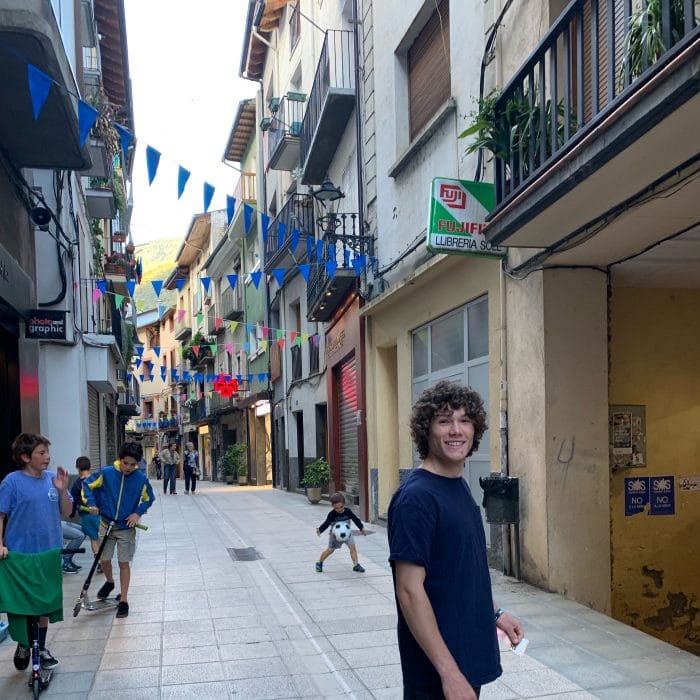 My experience of the World Championships is not just about the competition, but also about learning a new culture and spending time with the best kayakers from all over the world.

Being crowned the title of Junior ICF Canoe Freestyle World Champion for the year of 2019 still seems unreal. I am hoping with this win, I can help bring awareness of my sport to others in my community. Our family goal for this year is to get more individuals, including kids, onto the river and into kayaks. We volunteer, teaching both flat water and whitewater kayaking to those in our community, on a weekly basis. I aim to give back, as so much has been poured into me, by so many people. I wish to inspire others to dream big and set goals that bring dreams into a reality.