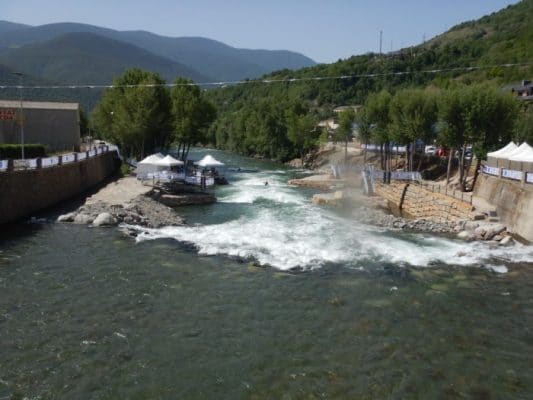 “So who is your kid?” I was asked by Dr. Isabelle from Canada during our meeting in the stairwell at the Pessets Apartments where many paddlers and their families were staying during the recent Worlds in Sort, Spain. “I am the kid!” I responded. Isabelle took a moment to understand my meaning and then she got it! We had a lovely conversation about medicine and paddling after that, but this was a first for me at a Worlds – to be assumed that I was a parent and not a paddler. The Worlds at Sort had many firsts which made it very special! 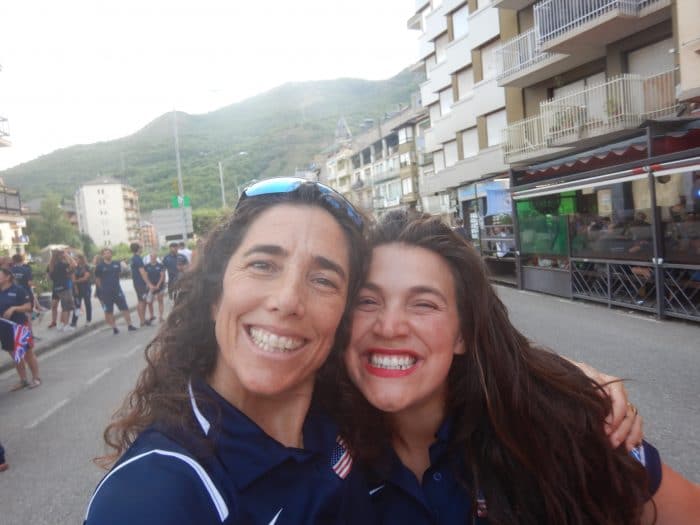 Another interesting first was that when I arrived, the Worlds’ feature was still being constructed. A huge bulldozer was down in the middle of the rapid just above the competition hole. It reminded of a trip I took to paddle in Costa Rica with EJ, Emily, Dane, Ruth Gordon, and Judd Kaiser back in 2008. We arrived at place where they were planning a rodeo and the bulldozer was in the river building the feature for the competition the next day! Luckily, this time, the Worlds was still a couple weeks away! 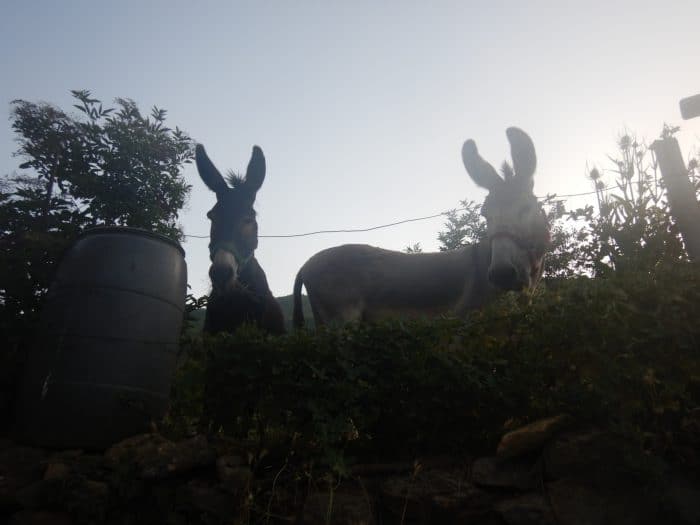 With the feature under construction and the water levels all over the place, it was challenging to find a rhythm and work out a routine. Sometimes something would work really well and other times not. Even simply setting up to do a trick required skill and patience. The water did not run all the time as it was dam controlled so having time on the feature was very limited, especially as more people arrived to train for Worlds. Often you would wait for 2 hours for 4 -5 rides! All of this said, as much as Worlds is about being ready and prepared to compete at a high level, it is also a fantastic opportunity to learn in an intensive way! This Worlds really highlighted that for me. Watching people and sharing with team mates and friends what worked and didn’t was really helpful, but at the end of the day, like 90% of kayaking, what happened in the feature was a direct reflection of what was happening in your head. Staying positive and sticking to a plan was and always is really the most helpful thing to do. This is a great lesson not only for paddling but also for life! Nothing like a Worlds competition to bring that point home! 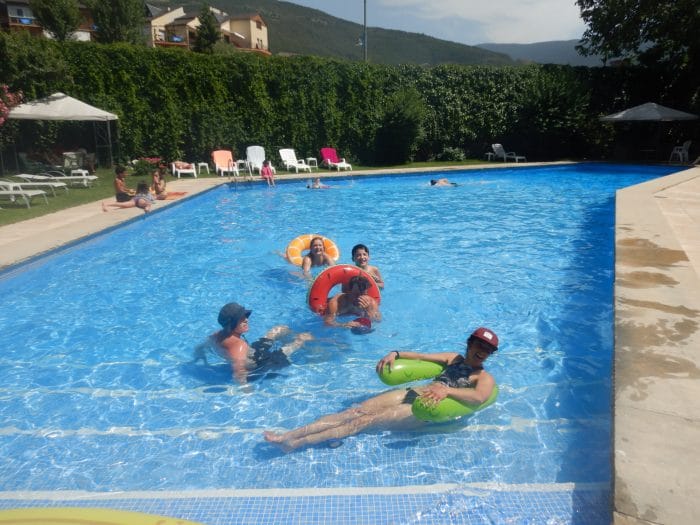 Another first was traveling to Spain! Sort, Spain is a magical town. Nestled into the Catalonian Pyrenees alongside the Noguera Palleresa river, considered the main artery of the Pyrenees, it is a real, thriving, old-world Spanish village in our modern era. It has all the charm and quirkiness of an Almodavaar film but its real – even better! As the site for the 2019 World Freestyle Kayaking Championships, it was awesome. After 10 years of World Championships and 20 years of competing, I can honestly say that this was one of the top 2 or 3 places I have been for a competition. Having a charming, authentic town in such a beautiful setting with extremely friendly people was just an enormous added bonus. There was so much to do, outside of training for the World Championships, that I definitely want to go back! 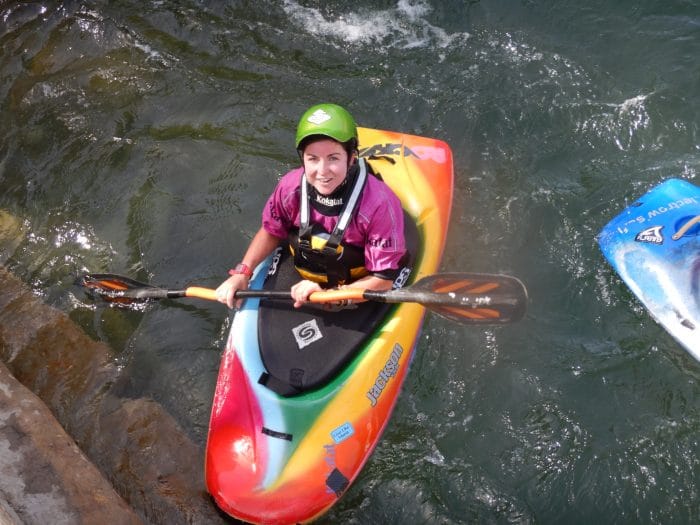 Every Tuesday morning, you could count on the most fabulous market happening in the street outside our apartment building. Incredible produce, cheese, olives, honey, and bread were readily available and super cheap! With incredible food, easy river access in walking distance of wherever you might be staying in Sort, and water available for a good part of the day for paddling – this may be one of the best paddling destinations I have visited in a long time.
In training for Worlds, it’s easy to focus only on the feature where the competition is being held and believe me, this feature needed a lot of focus – at least from me – it’s very easy to miss out on all the wonderful things that traveling to a foreign destination to compete allows. At this Worlds, I made a concerted effort to see other parts of the river, town, and area. Another first!! 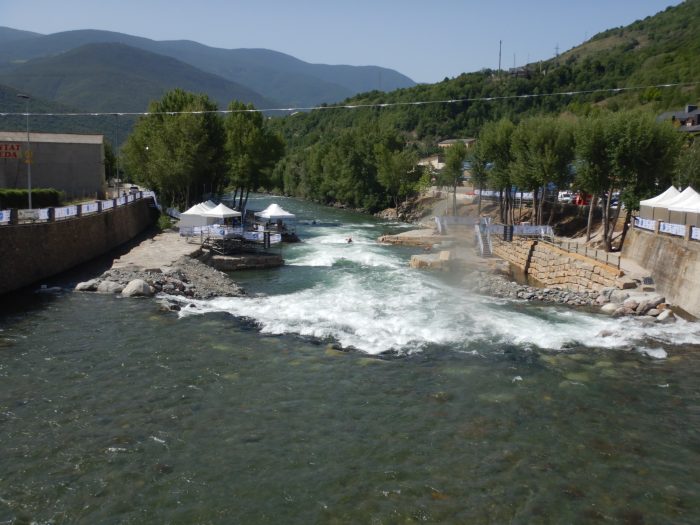 Juerg had heard about the world famous climbing nearby so we went to explore what that looked like and where it was! Inadvertently, we stumbled upon an amazing formation in the limestone rock that lines the Noguera Pallerersa River gorges. Strangely enough, there was a plaque with descriptions in English, Spanish and Catalan about the rock. As it turns out, this rock formation in particular inspired the famous Spanish architect Antonio Gaudi in his construction of his famous Sagrada Familia Cathedral. As my father had been a huge Gaudi fan, I felt like somehow we had been channeled to this perfect spot to find these inspirational rock formations. 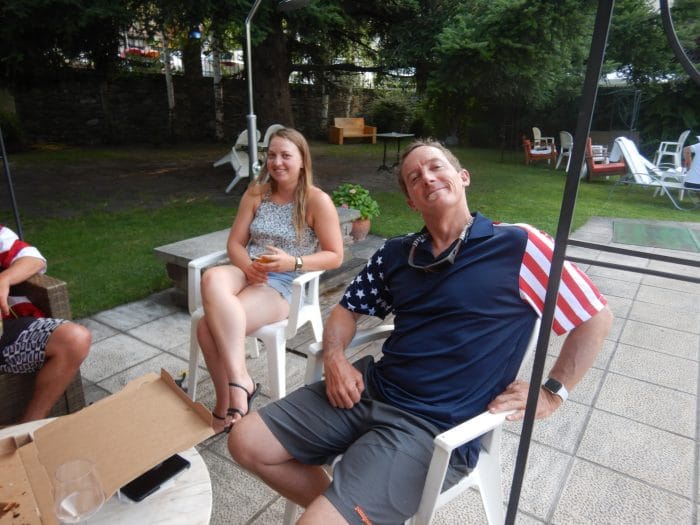 Another amazing discovery in the town of Sort was the Café Pessets. The brother of the owner of our apartment complex had opened a fantastic, unusual tapas restaurant in town an easy walk from our apartment. We certainly ate there more than we ate anywhere else. The menu is worth the trip to Sort alone, and they served incredible wine and beer as well from the local area. All of this fabulous food and wine was so well priced that we could eat out a lot! As we ate there so often, we became quite good friends with the people serving and cooking.
Besides two large clocks that tolled every quarter hour and on the hour, there were two donkeys living just above town that would announce their presence throughout the day and night. I don’t know how everyone else felt about this – but I loved it! As the days ticked closer to Worlds, the temperatures rose and the hotel pool became the ultimate hang out spot for just about everyone. It was the perfect way to relax, catch up and cool off! Definitely the best USA team party I can recall was organized by Joycelyn Fankhouser, our team manager, at the pool. We had lots of fun! I had a flash back to Emily and Nick’s wedding in Mexico where we spent hour and hours in the hotel pool. Unfortunately, we did not have an all night dance party!! 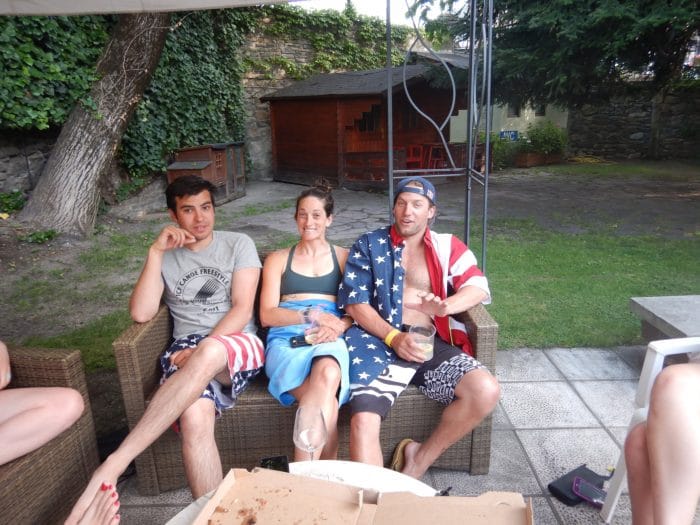 The relaxed and friendly Spanish atmosphere permeated this Worlds, and it was wonderful to enjoy especially because the hole was not giving anyone a warm friendly “I have this figured out” feeling! The challenge was for sure a good one and again an awesome learning opportunity but let’s say it did not make anyone feel very secure in their paddling. Despite this or maybe because of it, the entire experience felt like a terrific learning opportunity and an opportunity to enjoy more than just the Worlds feature! Thank you Sort!!