PanAm and Never Giving Up- My Story 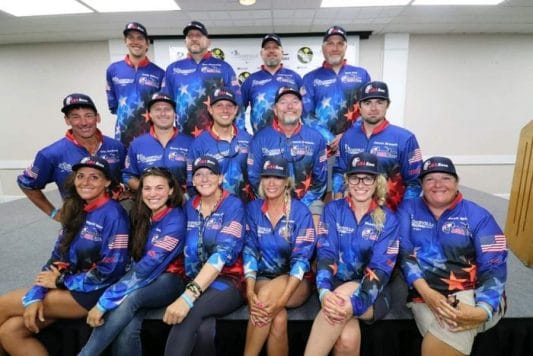 PanAm experience…first off AMAZING!! I’ve never seen such an awsome event put on for kayak fishing. They spoiled us for sure. I lived that we all were working together as one team. This is a memory I will hold near and dear to me for the rest of my life. 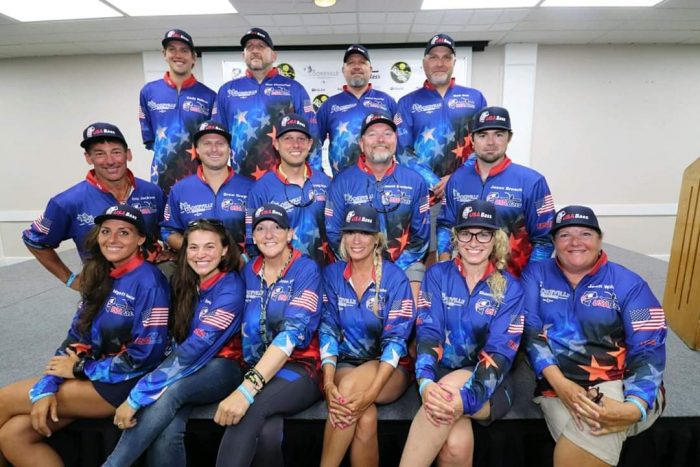 Lemme tell you a quick story about my journey through this event. Prefishing wasn’t panning out the way I would’ve been confident in and if I know ONE thing..Confidence is EVERYTHING when it comes to this type fishing. I knew right then what I was going to do because there was NO WAY I was disappointing my team, family or Michigander/kayak community friends. Let me give you a quick back story about my choice-
Jeremy and I had once came to this lake and traveled up a river that fed into the lake, where at the end was a beautiful waterfall. At that time, we couldn’t get our kayaks to the falls. We parked our kayaks on shore and land hiked it the rest of the way. We had attempted 2 days prior to our actual prefishing day to get up there because the water was lower but with our pedal drives and 3 other people (5 of us total), someone was going to get injured so…we turned around and finished the day fishing the lake. 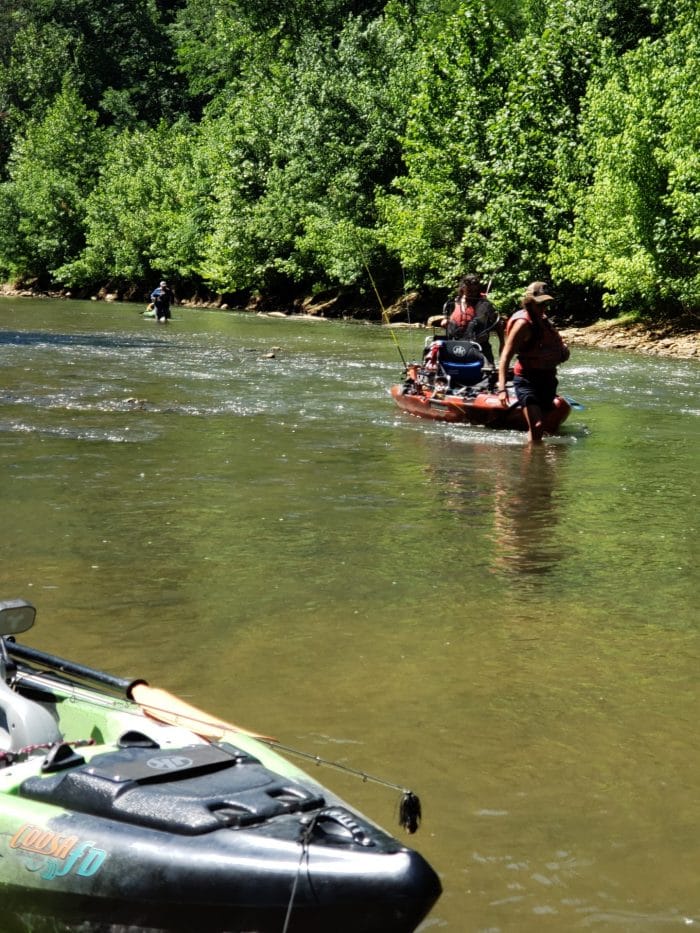 The next day, was day 1 of the event. Parade, media and meetings. 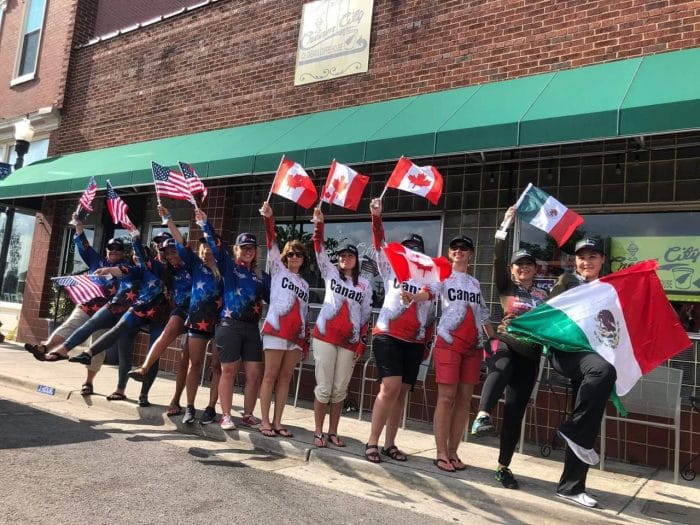 While I was busy, Jeremy went and picked up his new Kilroy from the Jackson Factory. He said he was going to attempt the falls with his new kayak to see if this could be a possibility for me come competition day. I told him to be careful and we parted. He assured me he would be back in time for the parade. 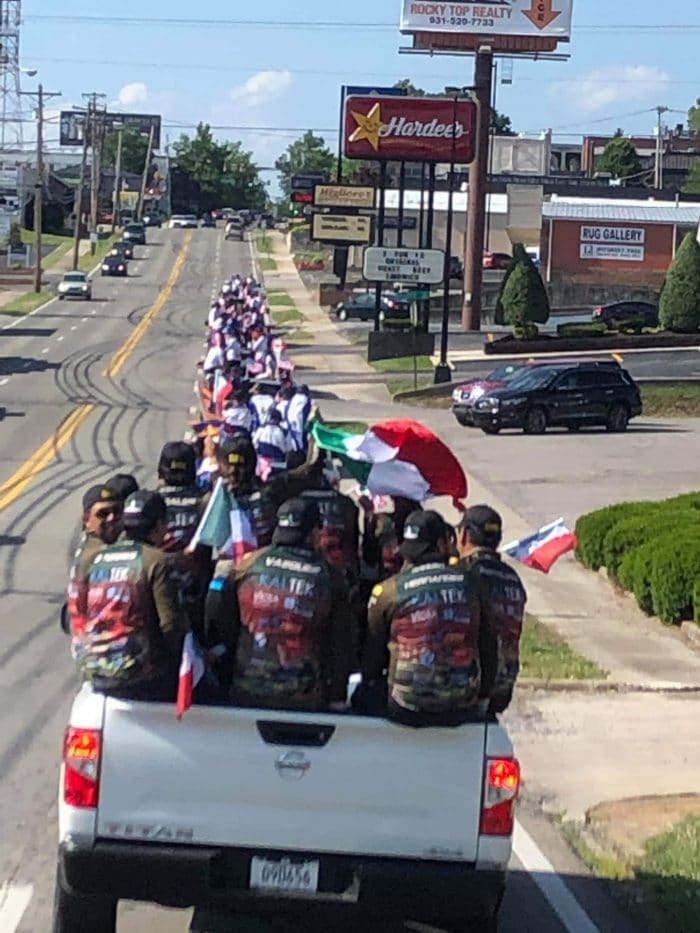 When he got back he was shaking his head. He said, “it’s not easy but its possible. If you decide to do it, I prefer you not to do it alone.”
Prefishing (day 2), my teammate’s and I decided to try Ragland Bottom. 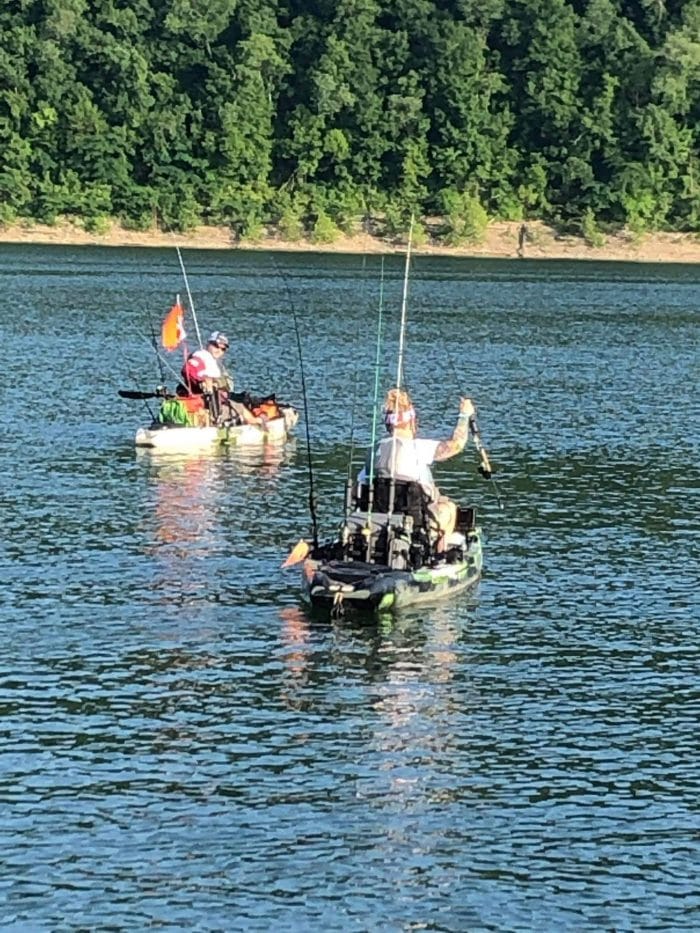 I pretty much told you how that worked out by the way I started this story. I knew a few hours into it what I was going to do. I was going to the falls and I needed to take Jeremy’s Kilroy because my pedal drive wasn’t meant for that type of adventure. I needed to downsize my tackle and poles. The kayak had to be as light as possible. I knew where I was guaranteed fish because that was my kind of water. I text Jeremy during my official pre-fishing day and said, “I’m going to the falls alone. I’ll be fine.” He simply responded “ok”. All the PanAm competitor’s met back at the hotel after prefishing. We all had to put which launch we were launching from in the morning. Once you put the launch down, you can’t change it. I told my teammate, Bridgett Howard my plan. I was going to the Cane Hollow launch and was going to make my way up to Burgess falls. She looked extremely concerned. I assured her I’d be fine.

After a bit of a discussion, she said ok and wrote me in for Cane Hollow. About 15 minutes later, Bridgett comes up to me and said Drew Gregory from Hooked on Wild Waters, was going to the falls as well. I gave her a confused look. I then said, “I hope it’s not because of me.” She assured me he had made that decision on his own.I get back to the room where I see Jeremy. I tell him Drew was going to the falls as well. He didnt look surprised. I looked at him after I thought about it and said, “you didnt ask him to go did you?” He half smirked and said, “noooo” with no eye contact. Not sure if theres a story there or not but I didn’t have time to dissect his statement. I had downsizing and a game plan to come up with and of course…try to sleep.PanAm (day 3) official start. Game time! I had Jeremy take a picture of me with the handkerchief my daughter bought me and the keychain she made me for good luck. I told him to tell her I love her and to send her this picture.

We paddled 1.25 miles regular water then dragged 3/4 of a mile up rapids to reach the water fall.

It was tough but Drew and I successfully got to the falls. Drew took off back down the rapids before me. I stayed for awhile longer. 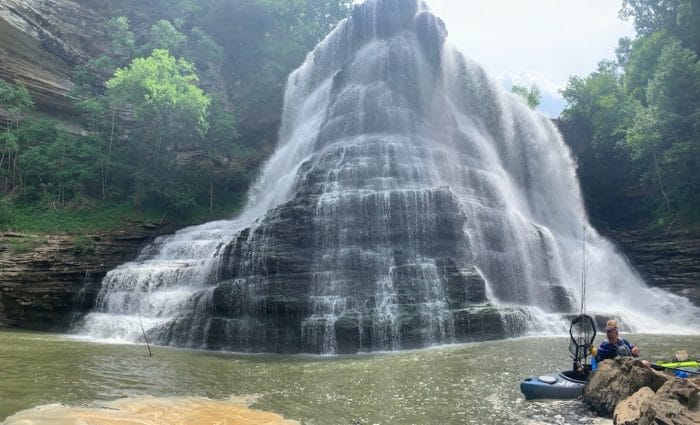 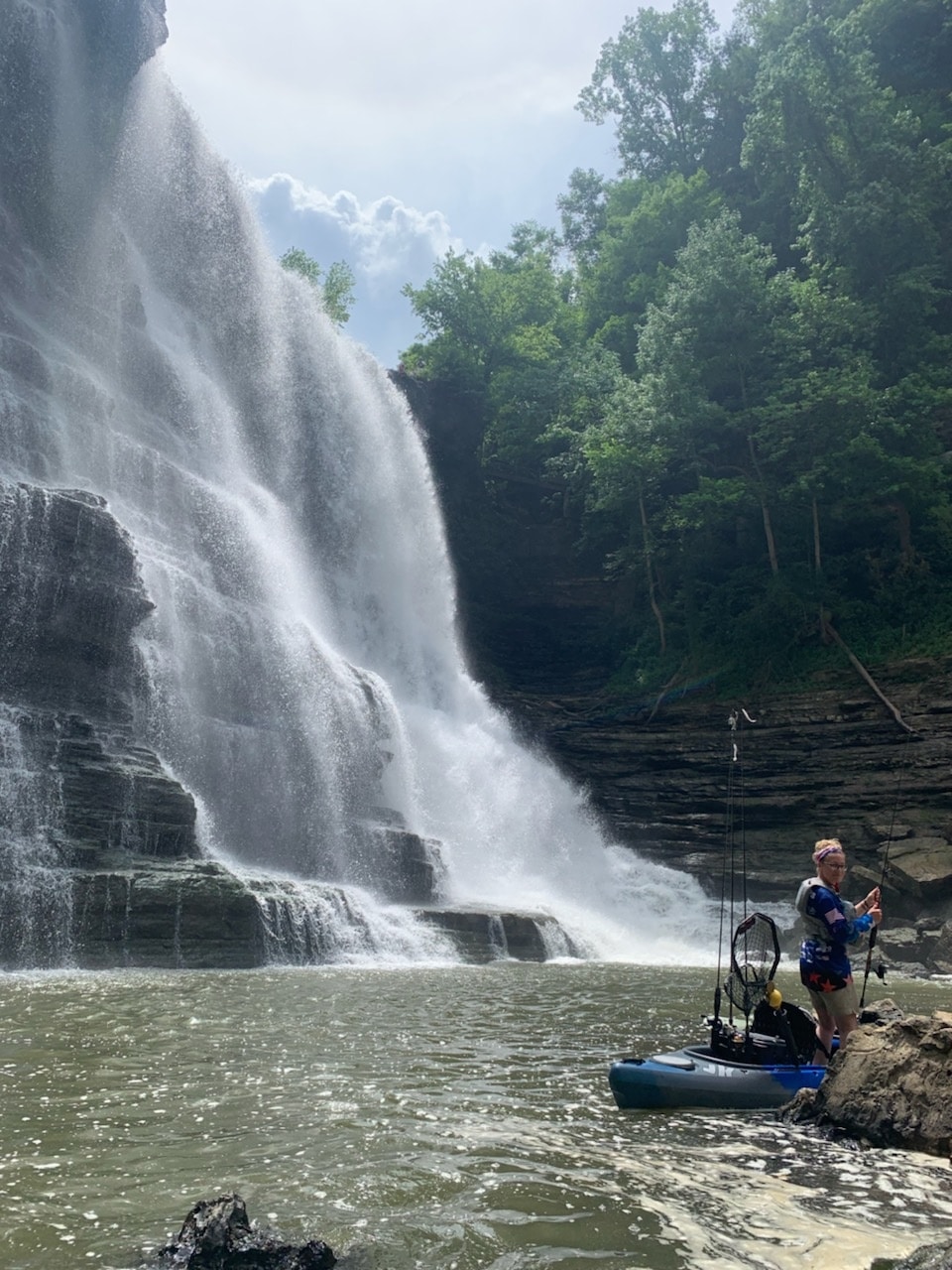 After I got my limit. I headed down as well. I stopped by a couple holes and culled up…barely but I caught fish all day. I knew I had a limit spot for day 4. I needed to get out of there so they would still bite the next day. Hence the reason I didn’t hang out at the falls all day. I ended the day in 13th place overall with one more day left.

PanAm (day 4)- I headed to my honey hole alone. ALL DAY I was going to fish the falls…that was the plan anyway but that soon changed.As soon as I got away from the picture/video area, I took my red, white and blue bandana that was tied around my leg off (the one my daughter gave me for good luck). I took my PanAm hat off. I then tied the bandana around my head like Tupac. I had my “I’m going to be brave and do this” attitude and my river Micha-gangsta look. Let’s do this!! It had rained the night prior. I didn’t realize that mountain rain made that river quite a bit higher. The bottom section where we dragged up most of the way, I could now paddle through. Sweet! As I was making my way up with alot less portageing, I hooked into a big catfish! I had one foot on land when I hooked him. He started pulling me back into the current, so I jumped out. Grabbed the kayak and the fish and got them both on land. After a couple pics, I released his heavy behind safely back in the water. 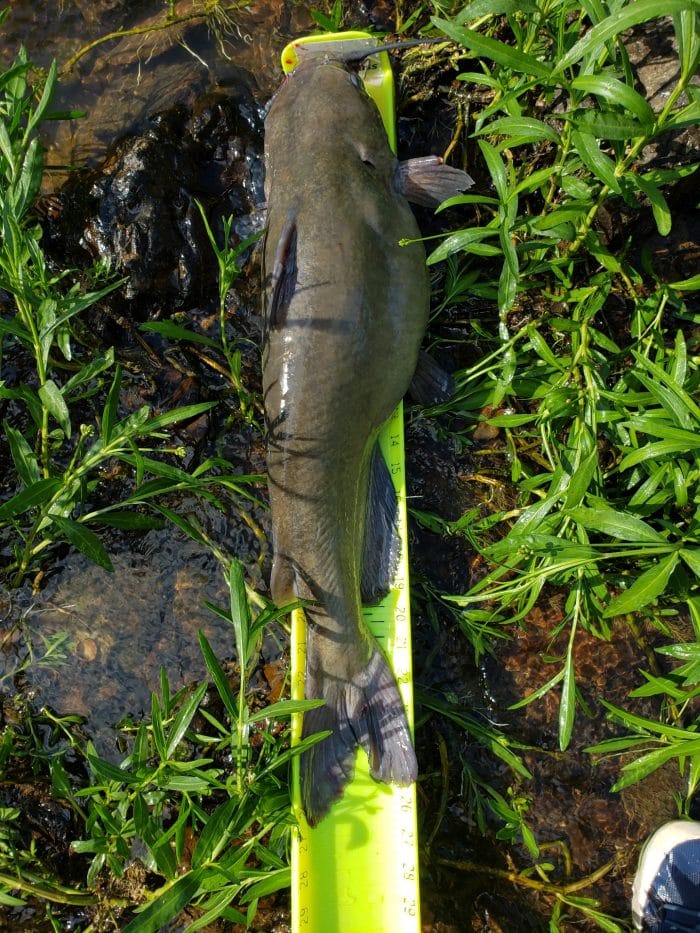 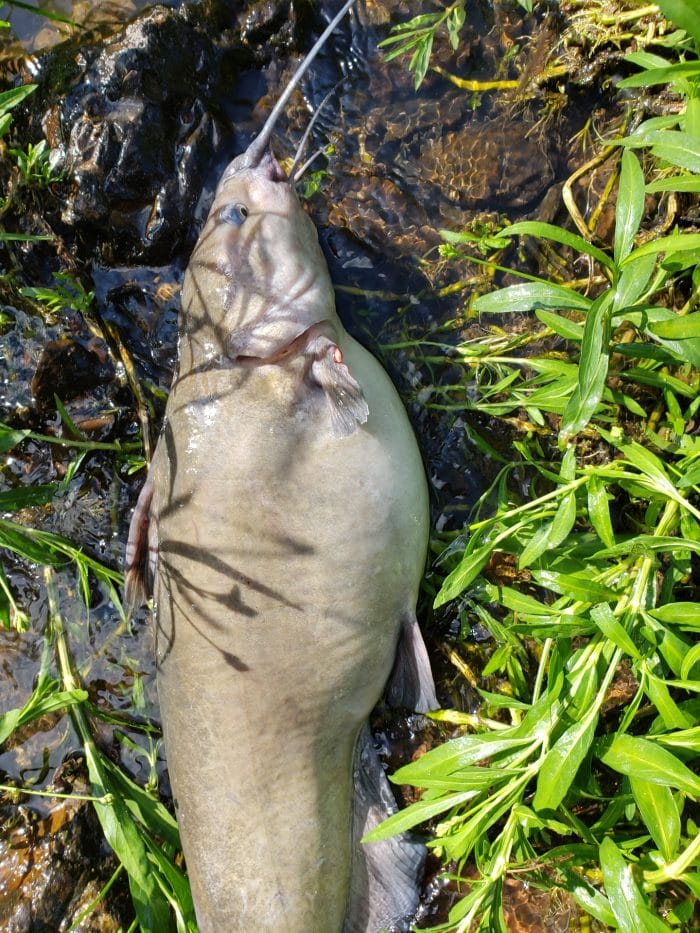 My photos are time stamped at 8:40 am at this point. I then grab the kayak, and start walking it up some rapids. Well…my foot slipped on a slimy rock, I landed hard on my right side. I took a rock to my right ribcage/back/hip. It took me a minute to realize what had happened. I immediately started feeling the pain go through my body. The kayak was safely wedged so I climbed to shore. I just layed there thinking, “I really just screwed this up!” The pain was so intense, I knew something was wrong. I then started throwing up. After that was over, I got myself together and decided to continue the journey and hopefully win this thing! I grab the kayak and continue my hike. I moaned most of the way up there, but I made it…
I get to the falls, first cast, I felt the pain shoot through my rib/back area. I didnt realize that was the main area of injury. My casts were severely short and not accurate. I was having no luck and it was getting late. I took a deep breath and tried to regroup. Next cast BAM! Fish #1! I continued to fish the falls but had no luck so I pulled my kayak down past the next rapid. I was starting to lose hope again. I plop down on my kayak that I have banked and fish this fast moving water hole.

After a few casts, I got numbers 2 & 3, then eventually #4 & #5! It wasn’t that simple but this stories getting long. Basically, I spent alot of time tieing on leaders, lost a bunch of lures and dont get me started on the snakes and spiders. If you ever wondered…snakes do Bite fishing lures and will bite off your plastic. Anyways…I jumped in the kayak and took a pretty easy ride back down the rapids. I was basically done at that point. I wanted to get to the ramp because paddling wasn’t easy with my recent injury. I “fished” near the ramp at the end. I basically dropped a jig and played with the bottom. No casting. I didn’t get anymore fish after I left the river. I crossed my fingers and hoped for the best. In the end, it was all worth it. It was an amazing experience. I’m proud of my accomplishments. I finished 10th overall. I came home with one bronze for ladies, one gold for ladies team (USA W2) and one gold for nations. I brought home a medal for every category. I’m so proud of myself for not giving up. 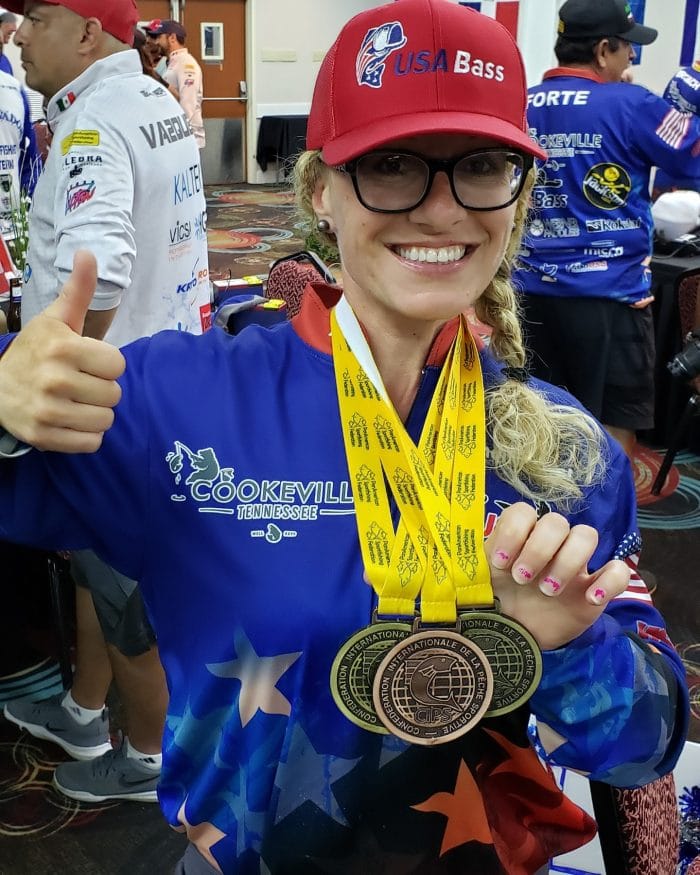